Franchise fans will appreciate the Easter eggs and flashy world building, but the first two episodes of the sci-fi action series are heavy on exposition and deviate from the established lore.

Paramount+ has already renewed the program for a second season, showing the streamer has high hopes for the project. So, does the sci-fi series live up to the hype? Here’s what critics, who were provided with screeners of two episodes for review, are saying about Halo:

How does it compare to the video games? 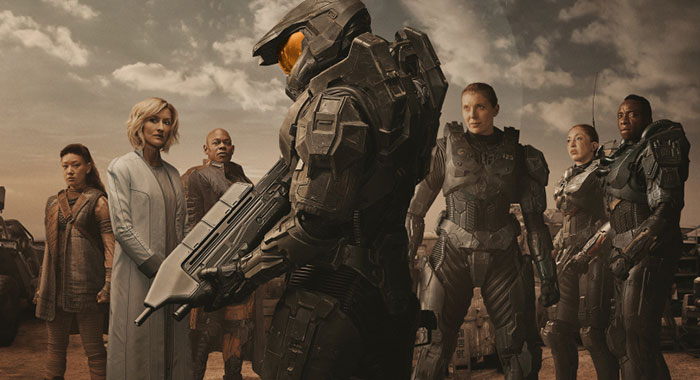 What I can say is that it is more ambitious in scope than I expected, but in becoming so it veers away from the original games. – Kevin Fox, Jr., Paste Magazine

Watching the first two episodes of the series feels similar to listening to a song that has sampled an iconic piece of music. The notes and some of the lyrics are immediately recognizable, but the shell wrapped around it is entirely original. The result is a series that manages to evoke many of the core themes and the visuals of the video games while also delivering a compelling narrative that’s more driven by its character’s motivations than chasing objective markers highlighted on a Heads-Up Display. – Brad Lang, CBR

Seeing the world through a vacant perspective might work for a game in which the audience has its own agency, but not for a show that requires its own point of view. In its first two episodes, “Halo” doesn’t quite have that yet. But as another entrant in the ever expanding “Halo” universe, it at least has enough ambition to make it worth a closer look. – Caroline Framke, Variety

Based on the two episodes provided for review, developers Kyle Killen (Awake) and Stephen Kane (The Last Ship) have opted not to straightforwardly adapt the scope and grandeur of the games to a television format, but to graft the lore, characters, and aesthetic of Halo onto the rhythms and tropes of sci-fi/fantasy streaming shows that came before. – Clint Worthington, Consequence

Paramount+’s Halo series marks an interesting departure for the franchise. Up until now, all the Halo media — the games, the novels, the comics, the previous live-action web series — has taken place within the same continuity. Halo has always taken the Star Wars approach of emphasizing a unified, cross-media shared universe. However, this live-action series breaks tradition by establishing its own continuity separate from that of the games and their various tie-ins. Even after one episode, it’s clear that approach was the right call. – Jesse Schedeen, IGN Movies

How are the action and production value? 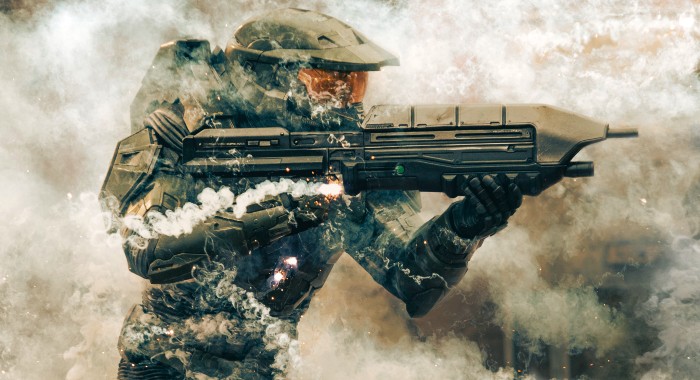 For a show based on an action franchise, though, Halo tends to be pretty skimpy on the shooting in the early going. Watching the SPARTANs calmly disassemble the Covenant Elites is admittedly thrilling, but it’s also over pretty quickly—leaving behind an impression of well-choreographed action, but cheap CGI. (Later close-ups on some of the Covenant’s leaders will show a more delightfully grotesque attention to chin-wattle detail, but the base alien soldiers often just look like football players with globs of CGI applied to their domes.) – William Hughes, AV Club

The action feels more like watching kids play with their toys than slickly choreographed cinema, but the money invested in this massive production is certainly up on screen. – Ben Travers, IndieWire

While the copious amounts of alien CGI are convincing enough and the fight choreography feels lifted right out of the game engines (regenerative shielding and melee attacks, game-accurate plasma rifles, and aerial ships!), this entire sequence unintentionally highlights the inherent restrictions of bringing material designed and created for video games into the uncanny valley of live-action. No matter how the sound design tries to sell it, neither the Spartans nor the Elites come with any actual weight or dramatic heft. – Jeremy Mathai, Slashfilm

I’m apprehensive by nature, but I’m enamored by the cast and generally impressed by the composition of the design. A lot of expensive projects end up looking cheap these days, but when I say it feels more like a high-end SyFy show than a low-end HBO show, I don’t mean the production values are bad; but rather, that this collaboration between Showtime and Amblin Entertainment does feel, in its bones, like it’s made for people that want to visit the world of the Halo franchise. – Kevin Fox, Jr., Paste Magazine

Given the wealth of lore needed to understand the looming events of the series, the first couple of episodes occasionally become bogged down in exposition dumps that aren’t necessarily communicated effectively. – Brad Lang, CBR

If the action in the first two episodes of “Halo” comes with a series of drawbacks, then the plot itself fares a little better. Rather than retreading narrative ground told elsewhere in franchise lore (like author Eric Nylund’s novel “Halo: The Fall of Reach” or the video game prequel “Halo: Reach”), the Paramount+ series boldly strikes out on new ground entirely — even if the scope and scale of the story at this point seems bizarrely limited. – Jeremy Mathai, Slashfilm

The series is so concerned with making sure that new fans understand this world of Spartans, Covenant foes, artifacts, and shady military dealings that it often chooses to over explain rather than let this new story breathe. Unfortunately, room to breathe is what Halo seems to need the most. – Kayla Cobb, Decider

How is Pablo Schreiber’s performance?

There are trees smaller than Schreiber, but his best performances have a wiry small-guy energy, like James Cagney woke up one morning in the body of an Eastern European power forward. Master Chief isn’t a completely thankless role — he shows his face more than you’d think — but any actor would look shrunken inside the Spartan mega-armor. – Darren Franich, Entertainment Weekly

Schreiber is, indeed, the most interesting thing about Halo—which isn’t necessarily saying all that much. – William Hughes, AV Club

Schreiber’s performance is about as good as one could hope considering his character is concealed beneath hundreds of pounds of reinforced titanium armor at all times. His voice and posture are enough to always make it clear what John is thinking and feeling at any given time. That said, let’s hope the series is a little more liberal than The Mandalorian when it comes to showing the main character’s face. – Jesse Schedeen, IGN Movies 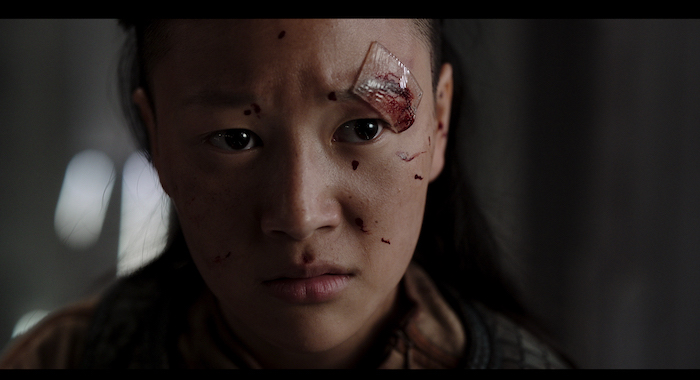 All of the actors playing UNSC officials and scientists are stuck delivering clumsy dialogue clumsily, and it’s only Natascha McElhone, as Spartan mastermind Dr. Halsey, who contributes a hint of mania that counts loosely as personality. As a human with some power with the Covenant, Irish actress Charlie Murphy is enigmatic enough for me to want more details about the character’s origins — perhaps the only piece of the storyline to evoke any curiosity at all. – Dan Fienberg, Hollywood Reporter

McElhone’s Dr. Halsey is another early highlight. The premiere dives right into her unusual status within the UNSC, a brilliant scientist with more than a few skeletons in her closet and the closest thing the Spartans have to a mother. She’s clearly not a figure who’s fully trusted by her military peers, and the series gives us little reason to trust her either. McElhone conveys the quietly ruthless, self-serving nature of Dr. Halsey very well. – Jesse Schedeen, IGN Movies

Kwan (Yerin Ha), a young colonist who sees her entire village wiped out by a group of elites, deserves special attention. She’s a fantastic foil to John-117, introducing a fiery rage that pairs well with his stoic determination. Their dynamic, while unconventional for Halo, works better than expected, allowing audiences to see a gentler side of John-117 that is rarely on display. Kwan also acts as a serviceable anchor for audiences who may be unfamiliar with the lore as she learns of a conflict that has been hidden from her for her whole life. – Brad Lang, CBR

Similarly, there’s Charlie Murphy Makee, a human member of the Covenant who opposes her own race. She’s a character so riddled with contradictions that she’s immediately interesting, and Murphy’s acidic performance highlights her mysteries at every turn. – Kayla Cobb, Decider

​​Worth remembering that one of the first Halo game’s sharpest decisions was an act of genre-stripping moderation. Players could only carry two weapons at a time, an invitation to careful strategy. In TV form, so far Halo’s all assault rifle but no direct hits. – Darren Franich, Entertainment Weekly

Creators Kyle Killen and Steven Kane have adapted Halo in a way that basically renders it — with the emphasis on “basic” — a clone of The Mandalorian (or Sweet Tooth or The Road or Lone Wolf and Cub). Boasting no technological innovation to speak of, few performances to offer meaningful grounding and only limited action thrills, Halo is aggressively forgettable, which is at least several steps up from “bad.” – Dan Fienberg, Hollywood Reporter

Packed with action, adventure, and so many video game references, this series is a fan’s dream come true…but also a great introduction to the franchise for newcomers. – Tessa Smith, Mama’s Geeky

This “Halo” series isn’t a one-to-one adaptation of the game by any means, which is sure to turn diehard fans away. It’s not particularly successful so far at forging its own path on its own merits, either, which might not appeal to those looking for a satisfying story. But at the very least, the foundation and the good intentions exist to make up for a slow start. In his time, the Master Chief has overcome much worse odds than that. – Jeremy Mathai, Slashfilm

With gorgeous production design, impressive visuals and thrilling action — not to mention a solid cast and a healthy respect for its roots as one of the most successful video game franchises in history — Halo is off to a very auspicious beginning. – Brent Hankins, The Lamplight Review

A surprising taste for cruelty isn’t a substitute for adequate use of a budget, and the end result is something that’s going to be at least a little repulsive to both fans of the game series—likely to be turned off by a universe that only sort of looks like the one they’ve spent hundreds of hours blasting their way through—and more general sci-fi fans looking for their next fix. – William Hughes, AV Club

Halo (2022) works for me, and I hope it works for you, or at very least you open yourself to allowing a new story to be told for a franchise we all hold dear. – Kate Sánchez, But Why Tho? A Geek Community

What we see is intriguing and demonstrates how there is a lot of potential for this Halo adaptation to thrive where many other forgotten attempts have failed. – Chase Hutchinson, Collider