Hailee Steinfeld to Play Hawkeye’s Kate Bishop, Who Takes Over the Superhero Role 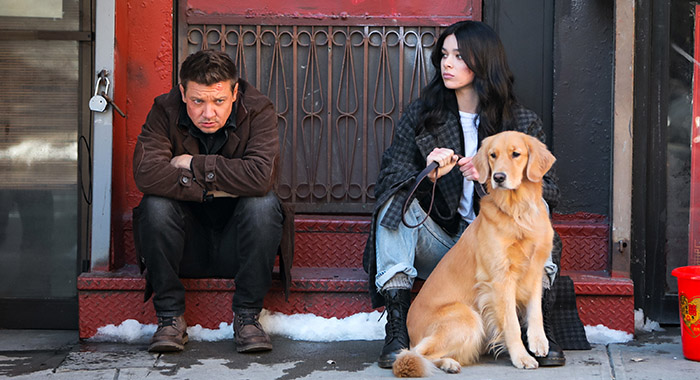 Will superhero Hawkeye eventually become superheroine Hawkeye in Disney+’s upcoming MCU series Hawkeye? All signs point to probably, as Hailee Steinfeld has been confirmed as Jeremy Renner’s costar in the new series. Steinfeld, seen in a video and photos from the series’ New York City set, will be playing Kate Bishop, who, in the comic books, takes over the Hawkeye gig after Clint Barton dies.

In the photos, Steinfeld is seen shooting scenes around New York City (above) and in a subway station with her trademark purple outfit and a bow and arrow at the ready. The Young Avengers member is not alone, though; Clint and adorable costar Lucky the Pizza Dog are also present.

Steinfield had posted a cryptic photo on Instagram on December 1 with a photo of a purple headband-wearing women who looks a lot like female Hawkeye and a caption that ended with a bow and arrow.

The Umbrella Academy Star Elliot Page Comes Out as Transgender 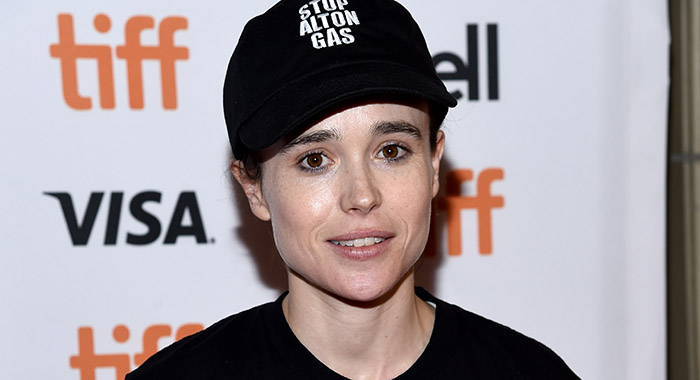 The Umbrella Academy star Elliot Page shared a heartfelt and open message with his fans on Twitter this week, saying he is trans and that his pronouns are he/they.

“I feel lucky to be writing this. To be here. To have arrived at this place in my life,” the actor, previously credited as Ellen Page, wrote. He also pledged, after acknowledging that he has experienced fear about potential violence directed at him, to use his celebrity and platform to try to make the world safer and more accepting for other trans persons.

“To all trans people who deal with harassment, self-loathing, abuse and the threat of violence every day: I see you, I love you and I will do everything I can to change this world for the better,” wrote Page, who is also known for roles in Juno and as Marvel X-Men film franchise character Kitty Pride.

Netflix, home of The Umbrella Academy, tweeted support for Page, saying “So proud of our superhero!” The streamer and the series’ producers have no plans to change Page’s character, Vanya Hargreeves, a cisgender woman, Variety reports.

Page, whose tweet has 1.8 million likes, also received tweeted messages of support from Sarah Silverman, Alyssa Milano, Rahul Kohli, activist Raquel Willis, James Gunn, Patrick Stewart, Sony, James Charles, Pamela Adlon, Josh Gad, and fellow Marvel superhero Mark Ruffalo (aka Hulk), who wrote: “You have made this world a more tolerant and loving place with your commitment, courage, and vulnerability. We are lucky to have public figures like you.”

If you’re an HGTV, Lifetime, Discovery, Animal Planet, or Chip and Joanna Gaines superfan, you may want to go ahead and add another $6.99 to your monthly TV-watching budget: that will be the price of an ad-free subscription to Discovery+, the new streaming service launching in January with new original programming and existing favorites from all the Discovery networks.

Discovery announced the service will launch with more than 55,000 episodes of programming, the largest-ever content library for a new streaming service. Networks represented will include HGTV, Food Network, TLC, ID, OWN, Travel Channel, Discovery Channel and Animal Planet, A & E, History, and Lifetime.

In season 3 of American Gods, the Starz fantasy series based on Neil Gaiman’s best-selling novel, Shadow Moon (Ricky Whittle) fights his destiny and his daddy issues after finding out that his boss Mr. Wednesday (Ian McShane) is Norse god Odin and his father. Settling down in snowy Lakeside, Wisconsin, he soon discovers that you can’t simply reject being a god — but you can choose what kind of god you’re going to be. Season 3 premieres Jan. 10. 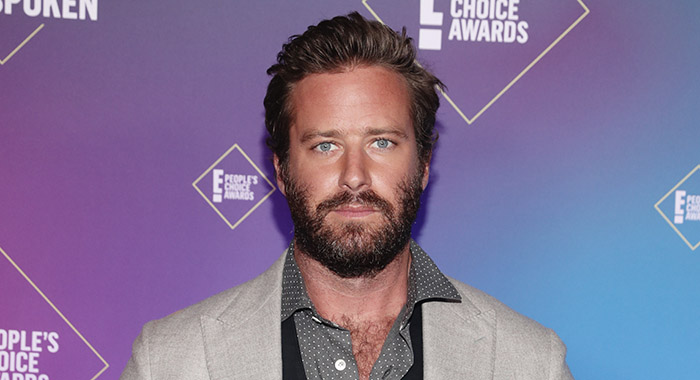 Armie Hammer  (Call Me by Your Name) will play The Godfather producer Al Ruddy in Paramount+’s limited series The Offer, about the making of the classic mob family drama. Ruddy is an executive producer on the 10-episode project, which is written by Michael Tolkin (Escape at Dannemora) and revolves around Ruddy’s own experiences on the 1972 film.

Read also: “Everything We Know About The Lord of the Rings Amazon Series“

Felicity Huffman has signed on for her first series since pleading guilty to fraud and serving a short jail term in 2019’s college admissions scandal: she’ll be the lead in ABC’s untitled baseball comedy, playing the owner of a pro baseball team. It’s inspired by the story of Susan Savage, the real-life owner of the Sacramento River Cats, a Triple-A baseball team of the San Francisco Giants. (Deadline)

David Ramsey, who played John Diggle/Spartan on Arrow, will return to The CW to play Diggle on Superman & Lois, Supergirl, The Flash, and Batwoman, and will also direct episodes of Superman & Lois and Supergirl. (Deadline)

HBO Max’s reboot of the ABC sitcom Head of the Class has added Watchman’s Jolie Hoang-Rappaport to the cast, while One Day at a Time alum Isabella Gomez will play the lead as the series’ teacher, the role played by Howard Hessman in the original. (Deadline) (Deadline)

Doctor Who stars Bradley Walsh and Tosin Cole, who play the Doctor’s companions Graham O’Brien and Ryan Sinclair on the BBC America series, will exit the drama via a storyline in “Revolution of the Daleks,” which will air on New Year’s Day.

Oscar and Emmy winner Helen Hunt will co-star with Jasmine Cephas Jones in Starz’s series adaptation of the 2018 movie Blindspotting. The movie’s stars and co-writers, Daveed Diggs and Rafael Casal, are executive producers on the series, and Casal will be the showrunner. The series continues the story of Ashley (Jones), whose plans are disrupted when her boyfriend goes to jail and she has to move in with his opinionated mother (Hunt). 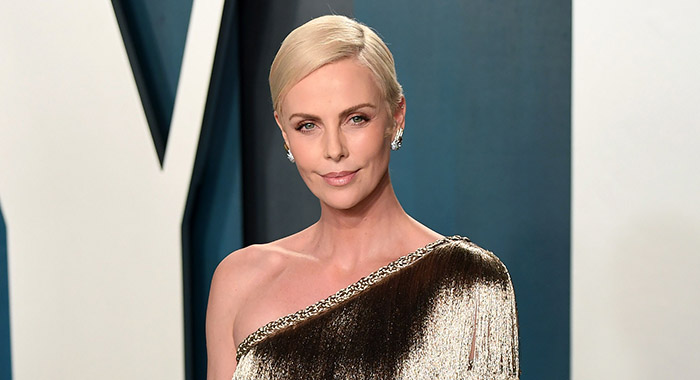 Charlize Theron has signed a two-year, first-look deal with HBO and HBO Max to create TV projects for the cable network and streaming service via her Denver & Delilah production company. Denver & Delilah has already produced series like David Fincher’s Mindhunter and the Netflix dramedy Girlboss. (THR)

Melissa McCarthy and husband Ben Falcone (who played her love interest in Bridesmaids) will star in and produce God’s Favorite Idiot, a workplace comedy for Netflix. Falcone will play Clark, a tech company employee who falls in love with co-worker Amily (McCarthy) right after he unwittingly becomes the messenger of God. Netflix has ordered 16 episodes of the series.

Vikings creator Michael Hirst is developing a new series at History: The Plague Year, which Hirst will executive produce, about a devastating outbreak of the Bubonic Plague in London in 1665. History is also developing The Donner Party, a limited series about the pioneers who resorted to cannibalism to survive after getting stuck in the Sierra Nevada mountains during the winter of 1846-47.

Jane The Virgin creator Jennie Snyder Urman has a pair of new dramas in the works with CBS. Danni Delgado is an adaptation of the German series Danni Lowinski (with a Latina lead for Delgado) and is about a hair stylist who graduates from law school and opens a practice inside a mall cart. Urman is also developing The System, about a social worker in New York City who’s trying to help families work their way through the same complicated system she and her family had to maneuver their way through when she was growing up. (Deadline)

Apple TV+ has given a series order to Acapulco, a Spanish and English language comedy about a man who lands his dream job at a hot resort, only to learn that it’s going to conflict with his personal morals. The series is based on the 2017 movie How to Be a Latin Lover, and will star the movie’s lead, Eugenio Derbez. Created by Zoey’s Extraordinary Playlist creator Austin Winsberg, Acapulco is set in 1984, and Derbez will narrate the series and play the present-day version of him.

Reese Witherspoon is producing the upcoming eight-episode Apple TV+ thriller Surface, which will star Gugu Mbatha-Raw, Witherspoon’s The Morning Show costar. Further details aren’t being divulged, but the series will go into production next year, and the show is based on an original idea from High Fidelity series creator Veronica West.

Chazz Palminteri is teaming with Oscar-winning Green Book writer Nick Vallelonga, Midnight Run writer and director George Gallo, and The Pope of Greenwich Village producers Hawk Koch and Gene Kirkwood to develop an eight-hour miniseries adaptation of the 1984 movie about brothers – played by Mickey Rourke and Eric Roberts in the movie – who create a dangerous situation for themselves when they unknowingly rob the mafia. (Deadline)

The first Jeopardy! episodes taped since the death of beloved host Alex Trebek will begin airing the week of January 11. Jeopardy! GOAT contestant Ken Jennings is the interim host.

Entourage creator Doug Ellin is teaming with Matthew Vaughn, soccer legend Thierry Henry, and Mad About You producer Chris Case for Day 1’s, a soccer-themed series. The 10-episode drama is set in the world of British soccer and follows a young player whose star is on the rise. Casting is in the works for a 2021 production start date, and Vaughn is scheduled to direct the pilot.