George R.R. Martin Weighs In on Game of Thrones Prequel House of the Dragon

Fans lose out on one GOT spin-off, but another gets picked up to series the same day. Plus, The Witcher trailer stirs up visions of sugarplums and monster hunts for the holidays and more new trailers, the latest castings, and development news.

The father of dragon tales takes to his blog to explain what happened to that first prequel and react to news of the second, which was ordered directly to series. The Witcher and more new trailers, castings, and development news. 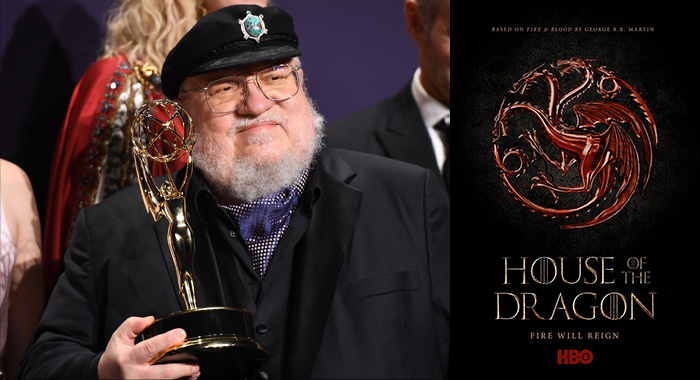 That Game of Thrones prequel series that was to star Naomi Watts and Miranda Richardson, that was to be set thousands of years before the original series, that shot a full pilot episode in Ireland earlier this year?

Yeah, no, HBO cancelled that this week, confirming it would not move forward with the highly-anticipated series on Tuesday.

But before the day had ended, the cable network offered news about that other prequel to fans: HBO has given a 10-episode order to House of the Dragon, a story that will revolve around House Targaryen and be set 300 years before the events of Game of Thrones.

Author George R.R. Martin co-created House of the Dragon with Colony co-creator and showrunner Ryan Condal, and the series will be based on the events in Martin’s Targaryen “history” novel Fire & Blood, as well as short stories in the Dangerous Women and Rogues anthologies. Emmy-winning GoT director and producer Miguel Sapochnik will direct the pilot and additional episodes, Condal will write the series, and the two will team up as showrunners.

But in a blog post, Martin denied that House of the Dragon is the reason Kick-Ass and Kingsman writer Jane Goldman’s GoT prequel, which was focused on the Stark family and the White Walkers and that the author unofficially called The Long Night, is deader than the attendees of the Red Wedding.

“It goes with saying that I was saddened to hear the show would not be going to series,” Martin wrote about the Goldman–Watts spin-off. “I do not know why HBO decided not to go to series on this one, but I do not think it had to do with House of the Dragon.

“This was never an either/or situation. If television has room enough for multiple CSIs and Chicago shows … well, Westeros and Essos are a lot bigger, with thousands of years of history and enough tales and legends and characters for a dozen shows. Heartbreaking as it is to work for years on a pilot, to pour your blood and sweat and tears into it, and have it come to nought, it’s not at all uncommon. I’ve been there myself, more than once. I know Jane and her team are feeling the disappointment just now, and they have all my sympathy … with my thanks for all their hard work, and my good wishes for whatever they do next.”

Martin also confirmed that House of the Dragon has been in development for years, that he first talked to HBO about it in 2016.

As for specifics on the new series: “Well, I can’t actually spill those beans,” Martin wrote, “but you might want to pick up a copy of two anthologies I did with Gardner Dozois, Dangerous Women and Rogues, and then move on to Archmaester Gyldayn’s history, Fire & Blood.”

Archmaester Gyldayn is the fictional author of the Targaryen history book.

READ MORE: House of the Dragon and More Upcoming TV Fantasy Series That Could Be the Next Game of Thrones

Disney+ has ordered 10 episodes of the new dramedy Big Shots, which will star John Stamos (You) as a college basketball coach with anger issues. His most immediate issue: getting fired from his college gig and becoming a teacher and basketball coach at an elite all-girls private school. David E. Kelley (Big Little Lies) will write and serve as an executive producer on the series, which sparked from an idea pitched to Kelley by comedian and Single Parents star Brad Garrett. Garrett will also be an executive producer on the series, which begins filming in Los Angeles in November. 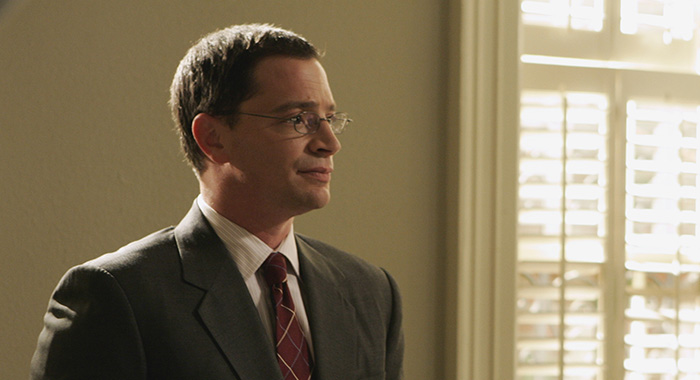 Tony winner Andrew Garfield will star in Tony and Pulitzer winner Lin-Manuel Miranda’s Netflix adaptation of tick, tick … BOOM!, the autobiographical play Jonathan Larson wrote before he wrote Rent, the musical that went on to earn the playwright a Pulitzer and three Tonys. Larson won the awards posthumously; he died of an aortic dissection the day of Rent’s first Off Broadway preview performance. (Deadline)

Monica Raymund will return to Chicago Fire for the series’ season 8 midseason finale on Nov. 20. Her character, Gabby Dawson, was last seen in season 7, when she left the Windy City and moved to Puerto Rico to work on hurricane relief projects.

Peacock, NBC Universal’s upcoming streaming service, has cast its teen mystery pilot One of Us Is Lying. Barrett Carnahan (Grown-ish), Annalisa Cochrane (Cobra Kai), Marianly Tejada (The Purge), Cooper van Grootel (Go!), Chibuikem Uche (Ghost Draft), Jessica McLeod (You Me Her), and Melissa Collazo (Swamp Thing) will star in the story, based on Karen M. McManus’s bestselling YA novel, about five high schoolers who are ordered to serve detention together … but only four of them come out of it alive.

Lynn Chen (The Affair) and Idara Victor (Rizzoli & Isles) will be recurring cast members on season 10 of Shameless, which premieres on Showtime on Nov. 10. Chen will play Mimi, a new friend of V’s, while Victor will play Sarah, who runs an AA group of moms. (Deadline)

WarnerMedia announced price, launch month and lineup for its upcoming streaming service HBO Max. It will feature more than 10,000 hours of programming, including 88 original series by 2021. And here’s another number HBO Max execs are hoping viewers will focus on: $0 — that’s how much extra HBO subscribers on AT&T distribution platforms and HBO Now direct-billed users will have to pay for HBO Max, which will launch in May 2020. The monthly cost of the streaming service for most others will be $14.99.Read “Everything We Know About HBO Max Streaming Service” for a list of originals and library titles that are in the works and more information.

The CW is developing Superman & Lois, an Arrow spin-off that will find Tyler Hoechlin and Elizabeth Tulloch reprising their titular roles, which they’ve performed on Arrow and Supergirl (Tulloch will appear on Supergirl in a January 2020 episode). The potential drama will revolve around Clark Kent/Superman and Lois’s life as working parents.

Kerry Washington and Larry Wilmore are producing Reasonable Doubt, a legal drama being developed at ABC. Another producer on the project: attorney Shawn Holley, a member of the “Dream Team” that defended O.J. Simpson in the “Trial of the Century.” Holley is at least part of the inspiration for the series, which revolves around Charlie Stewart, an attorney known for her “questionable ethics and wild interpretations of the law,” but also as “the most brilliant and fearless defense attorney in Los Angeles, who bucks the justice system at every chance she gets.” (Deadline)

BoJack Horseman + Legos = our next reality competition series obsession. Will Arnett, the voice of Netflix’s anthropomorphic horse (and of LEGO Batman), is an executive producer of Fox’s LEGO Masters series, and he’ll also host the series, which pits LEGO builders against each other until the ultimate architect of the toy bricks is crowned champion. The series premieres on Feb. 5.

The Big Short Oscar winner and Succession executive producer Adam McKay will produce a limited series about Jeffrey Epstein, as part of McKay’s new five-year deal with HBO. Under his new Hyperobject Industries umbrella, McKay will base his series about the late financier on the upcoming book by Miami Herald investigative reporter Julie K. Brown, whose reporting on the Epstein case helped bring about his arrest in July on sex trafficking charges. Brown will serve as an executive producer on the HBO series. (Deadline)

Sons of Anarchy and The Village producer Mike Daniels is developing Adam & Eva, a “modern-day Adam and Eve drama” based on a Dutch series, for NBC. Deadline describes the series as “a funny and heartfelt drama that chronicles the epic love and lives of two complete strangers whose multiple run-ins begin to defy coincidence and lead both to believe in fate.” (Deadline)

The CW gave full-season orders to its freshmen dramas Nancy Drew and Batwoman.

CBS is developing We the Jury, a comedy about a sequestered jury that can’t come to an agreement about anything, even lunch. Friends writer and producer Dana Klein is a co-creator on the series. (Deadline)

Saturday Night Live alum Bobby Moynihan is the creator, writer, and executive producer of Loafy, an upcoming Comedy Central digital series about a manatee who runs a drug empire from his water tank at the Center Park Zoo. Moynihan will also voice the main character in the series, which will premiere in 2020 on all Comedy Central digital and social platforms.

The Freeform cable network is developing a modern day spin on Dante Alighieri’s 14th-century epic poem Inferno, which will be set in Los Angeles and revolve around Grace Dante, a young woman with serious responsibilities – a drug addict mother and dependent brother – whose life suddenly starts improving … thanks to the devil. To outsmart him, Grace has to make her way through the underworld, i.e. present-day L.A. (THR)

Disney+ has ordered 10 episodes of Becoming – a documentary series that breaks down the early years of celebrities – from producer LeBron James’s Springhill Entertainment. Nick Cannon, Lakers All-Star Anthony Davis, and WNBA All-Star and two-time Olympic gold medalist Candace Parker are among the celebrities who will be profiled.

Netflix has ordered eight episodes of Heaven’s Forest, an animated drama with stories and characters inspired by the Indian mythology of Ramayana. Castlevania creator Warren Ellis will write and serve as an executive producer on the project. (Deadline)

Sony Pictures Television is developing The Good Dish, a syndicated daytime series for 2020 hosted by Daphne Oz, Vanessa Williams, Gail Simmons, and Jamika Pessoa. The spin-off of The Dr. Oz Show began with cooking segments on that series (hosted by Oz’s husband Dr. Mehmet Oz), and will expand on the cooking segments with lifestyle, budget, and menu advice.

Wilmer Valderrama is producing The Trail, a drama CBS is developing about elite investigators who work for the U.S. National Park Service and solve high-profile cases at Yosemite National Park. (Deadline)

Quibi is also putting a new spin on the celebrity game show. Comedian Ron Funches will host Nice One!, in which comedians are pitted against each other and challenged to “out-compliment one another in a showdown of sweetness and consideration.” (Deadline)

Lucifer will air its final season in two parts, each made up of eight episodes. Series star Tom Ellis announced the season 5 breakdown while he hosted a tour of the Lucifer set on The Kelly Clarkson Show.