The Hunger Games star talks about blockbusters vs. indies and adventures in free-running.

A little over two years ago, Jennifer Lawrence was a talented yet relatively unknown young actress with a handful of television roles (including the TBS sitcom The Bill Engvall Show) and a few small indie films to her credit. All of that changed when, at age 20, she turned in a powerhouse performance in Debra Granik’s bleak 2010 drama Winter’s Bone and earned a Best Actress Oscar nomination (the second youngest ever to get the nod) for it. Her star then rose rapidly the following year, as she proved equally adept in big budget blockbusters like X-Men: First Class and indie fare like Jodie Foster’s The Beaver and the acclaimed romance Like Crazy.

This week, Lawrence takes the next big leap forward, starring in the film adaptation of Suzanne Collins’ sci-fi novel, The Hunger Games. All eyes will be on her as she takes on the role of Katniss Everdeen, the central figure of a wildly popular epic trilogy set in a dystopian future, but her previous success playing strong, young women should indicate the character is in good hands. RT was fortunate enough to speak with Lawrence about her career thus far, her training regimen for The Hunger Games, and whether she approaches all films, both big and small, the same way, but first, here are her Five Favorite Films:

Midnight in Paris, I saw this year, and I was just blown away. I think it might be my favorite movie now. I loved it. It was funny, it was inventive, imagination and dresses and all of our favorite writers. Owen Wilson was hilarious. It was just perfection.

Are you a Woody Allen fan?

Yes, yeah. But I think Midnight in Paris… I know he always gets skeptical when his movies go mainstream, but I love that one.

And then, I love I Heart Huckabees. I think that might be my favorite comedy. And I know it’s weird, because every time I tell people that, they’re like, “Oh, I’ll have to see it.” And I say, “You know, you might not like it,” because it’s just so weird. But I loved it. I was obsessed with it when I first saw it; I watched it four times in one week.

Harold and Maude is a classic that I love.

So, for #5, I can either choose The Last Picture Show, Old School, or A Woman Under the Influence. Probably Old School, with Will Ferrell, when he goes “Hi honey, do you think KFC’s still open?” [laughs]

Next, Lawrence talks about her extensive training to play Katniss in The Hunger Games, as well as the difference between making blockbusters and smaller independent films.

You aren’t what they call “classically trained” in acting; you discovered a natural talent and desire for it, and you’ve stated that you rely more on your instincts. Now, it’s been a long time since I vanquished my first rival, so what did you draw from to portray a teen killing machine so effectively?

Jennifer Lawrence: Well, I’m a method actor, so I went on a killing rampage. [laughs] No, I don’t really know, because I haven’t really gone through anything that any of my characters I’ve ever played have been through. I think that’s just something that all actors have to deal with. It’s just kind of like, “Well I think this person would react kind of like this.” But you never know. Yeah, instinct is big for me; it’s mostly like when you read it, like when you read a book and you kind of imagine how the person is saying things, and what they kind of look like when they do it. You just kind of go with it.

So you have a knack for empathizing with characters’ plights and their situations, getting through to what they’re feeling.

Yeah, well, I don’t know if it’s a knack. It’s more like I don’t really know what I’m doing — it might just be out of sheer desperation of showing up on set and not knowing exactly what to do. [laughs]

I assume you had to have some training in archery for the role.

I did. I mean, I had training in every aspect. I had many weeks of archery, then free-running training, then track running, hand-to-hand combat, climbing… Just everything.

Did you say free-running? As in parkour?

Yeah. Yeah, I can wall jump! And one time, I had to do ten in a row, and on the tenth one, you know, you have to run as hard as you can to the wall, and I ran, jumped, and then something happened with my legs where they just went “meh” and they just stayed down, and I hit my stomach on the wall so hard and landed. All the stunt guys were like, “Oh my God, I haven’t seen somebody hit the wall that hard in so long!” I was like [breathless voice] “That’s great.”

Did you do that without safety wires?

Yeah, this was during training.

Well, at least now you can tell people you know parkour.

Yeah, now I can walk by stairways outside and say, “Yeah, I can jump that.”

You’ve obviously proven your solid acting chops, particularly with Winter’s Bone, but now you’ve added X-Men: First Class and The Hunger Games, which are two big action blockbusters, to your resume. Did you ever picture yourself as an action star?

No, never. I like it. It’s definitely exciting. They’re fun scripts to read, and they make you think, “Well, that’ll be fun to make.” And then it’s fun to watch, too. Honestly, it’s script by script. I’ve never been like, “Well, I want to do this kind of movie, this genre, or that genre.” I really loved the X-Men: First Class script; I thought it was really cool and great, I loved that it was set in the ’60s, and I really enjoyed reading it. And then, the same with The Hunger Games; I had read the books, and I was a huge fan of them — I loved them — and it was kind of by coincidence that they were both action movies.

Being that X-Men had a lot more CGI effects and that sort of thing, how different was the training you had to go through for that, compared to The Hunger Games?

How would you compare working on those big films to working on something smaller, like The Beaver or Like Crazy?

Assuming The Hunger Games does well — and let’s be realistic here: it will — are you already looking forward to doing the sequels?

Oh, absolutely! I had a blast doing this.

The Hunger Games opens in theaters this week. 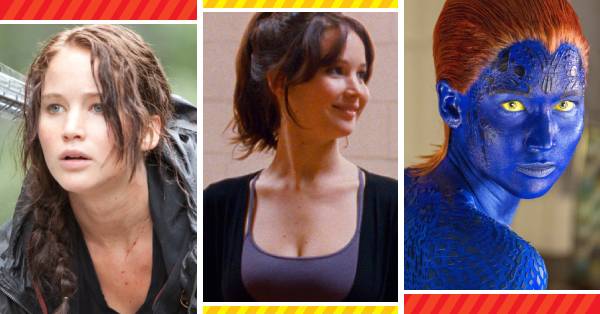