The first critics to weigh in on Damien Chazelle's space drama say it's thoughtful, well-acted, and beautifully filmed, even if it's not a game-changer.

The Neil Armstrong biopic First Man has kicked off the 2018 Venice Film Festival with a bit of a bang. Damien Chazelle’s follow-up to his big Oscar-winning musical La La Land reportedly does not disappoint, though it also doesn’t sound like the kind of major awards contender that his previous feature was. Based on the first reviews to come in, praise for First Man so far is positive, if a bit safe, landing the film somewhere between merely fine character study and next-level space exploration drama. It’s currently Fresh at 88%, based on 25 reviews.

Though we’re still far from any sort of critical consensus, you can check out what the very first round of critics are saying:

Does First Man stand out among other space dramas?

First Man stands out, in both content and form, as a remarkable, jaw-dropping departure from anything Chazelle has previously made… Nobody has taken us to space this way before.
– Leonardo Goi, The Film Stage

First Man is so immersive in its glitchy, hurtling, melting-metal authenticity that it makes a space drama like Apollo 13 look like a puppet show… [It] bears the same relation to the space dramas that have come before it that Saving Private Ryan did to previous war films. The movie redefines what space travel is — the way it lives inside our imaginations — by capturing, for the first time, what the stakes really were.
– Owen Gleiberman, Variety

When Armstrong climbs into Gemini 8 and it blasts off into the heavens, we’ve never felt this claustrophobia or listened to the creaking of the metal or felt the thrust of the rockets quite this way before in a movie.
– Alonso Duralde, The Wrap

How is Ryan Gosling’s portrayal of Neil Armstrong?

Gosling manages it superbly…it is Gosling’s great achievement that he can convey so much while speaking so relatively little.
– David Lister, The Independent

Ryan Gosling, turns in a discreet, sensitive performance, almost too sensitive for the movie around it.
– Stephanie Zacharek, Time

Gosling’s role in First Man might not attract the same kind of attention from the Oscars that his turn in Chazelle’s previous film did, but it would be unfair to dismiss the La La Land actor here entirely.
– David Opie, Digital Spy

Are there any other standout performances?

Although there’s one scene in particular starring Gosling early on that may grab the Academy’s attention, it’s still tempting to argue that Foy outshines him here.
– David Opie, Digital Spy

What else does the movie have going for it?

The absolute knockout performance, in fact, comes from DP Linus Sandgren, shooting in deliciously grainy 16mm and 35mm and, when we finally get to the moon, cracking open the widescreen glory of 70mm IMAX.
– Jessica Kiang, The Playlist

Like the best historical dramas, the film creates suspense over events whose outcome we already know.
– Alonso Duralde, The Wrap

It’s the script’s seamless grounding in the personal that hooks you.
– David Rooney, Holllywood Reporter

The movie feels too fussed-over for such a low-key hero.
– Stephanie Zacharek, Time

If there is a less impressive aspect, it’s the story, which suffers from having an outcome we all know and a rather cursory approach to the supporting character.
– Jessica Kiang, The Playlist

How should we see First Man?

First Man opens in limited release on Friday, October 12. Read all the reviews for it here. 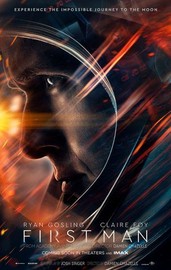