20 years after its release, we look back at the unique supernatural thriller that used pitch-black humor and elaborate set-pieces to give us a modern cult classic.

Everyone likes a good horror franchise with an iconic villain who preys upon a new group of innocents in every installment. The problem, though, is that they start to run out of steam after a handful of installments. No matter how good Halloween, A Nightmare on Elm Street, or Friday the 13th are, eventually we get something like The Revenge of Michael Myers, The Dream Child, or Jason Goes to Hell. But there’s one franchise that, in the wake of Scream, utilized humor to help revitalize the slasher genre at the outset of the new millennium and made audiences afraid of literally everything, and it all began with 2000’s Final Destination.

Even if the franchise isn’t the most critically acclaimed, its very concept seems clearly built to be a lasting enterprise. Final Destination boasts a villain you can never beat and a series of kill scenes that only get more inventive with each installment. For its 20th anniversary, we’re getting off the plane to tell everyone how Final Destination kicked off the best horror franchise of the 2000s.

IT WEAPONIZES ANXIETY AND MAKES THE MUNDANE DEADLY

From its opening title sequence, the original Final Destination plays on the idea of anxiety and paranoia in everyday life. We meet Alex (Devon Sawa) as he’s preparing for a class trip to France, revising his schedule for the flight, when he suddenly freaks out at the idea of his mother removing the luggage tag from his last flight because it would bring him bad luck. From then on, both Alex and the audience see ominous signs everywhere, from a faulty alarm clock to the sudden cancellation of a bunch of flights to the sign with the gate number breaking. These omens culminate in a premonition of the plane exploding shortly after take-off and killing everyone on board. Those kinds of accidents are exceedingly rare, of course, but it’s easy to sympathize with the idea that when you’re anxious about something like flying, everything feels ominous.

Even before Final Destination gets to its convoluted, Rube Goldberg-like death traps, the films weaponizes very real fears, and that’s what makes the horror of the film follow you home and haunt you for days. Unlike a supernatural horror movie that depends on its victims being trapped in a haunted house or a slasher where the villain is a masked killer, the horror of Final Destination only feels like pure fiction until you’re driving home behind that truck carrying flammable gases, or you’re walking down the street and nearly trip over an uneven bit of pavement, or you realize your bathroom floor is extra slippery right as you enter the shower. From the big, opening premonition sequences that set each of the movies in motion to the bizarre and very bloody “accidental” deaths that follow, the Final Destination franchise takes advantage of your actual fears and turns them into your worst nightmares.

Suddenly you realize that not living anywhere near Camp Crystal Lake won’t save you, and that not moving into a haunted house won’t prevent you from dying a horrible death, because the villain here can’t be defeated, and it’s coming for us all.

THERE IS NO VILLAIN, AND NO ESCAPE

Birth.Movies.Death’s Brian Collins said it best when we wrote that one of the most surprising things about Final Destination was the way the film became such a successful franchise despite its lack of a villain you could commercialize. The iconic hockey mask from Friday the 13th and the glove adorned with knives from A Nightmare on Elm Street are massively marketable props that helped their respective franchises stay alive.

But when it comes to Final Destination, there are no action figures or costumes for the film’s villain, because there is no villain in the traditional sense. The antagonist is the concept of Death itself, and we’re not talking about the Grim Reaper with his hood and sickle, but an unseen force that subtly (or not-so-subtly) gives objects a tiny little push in increasingly convoluted ways to ultimately lead to someone’s demise. Sure, the series tapped Candyman star Tony Todd to play the mysterious mortician Bludworth and lend the films some horror cred, but he’s more of a cheeky messenger than a harbinger of evil.

And yet, as fun as it is, this franchise is as existential and grim as it gets. In most horror movies, there are rules you can follow to survive, as Scream taught us in 1996. Slasher movies in particular act as sort of morality tales, with characters who behave badly facing divine justice in the form of a bloody demise. Final Destination is so terrifying because there is literally no escape. Even when the characters think they’ve found a loophole and manage to outlive death’s design, something else happens, and they all meet their gruesome ends. There is no hope for survival because, while you can outrun a man with a knife, solve Jigsaw’s puzzles, or exorcise a demon, you can’t outrun Death forever.

THE SCARES ARE BALANCED WITH HUMOR 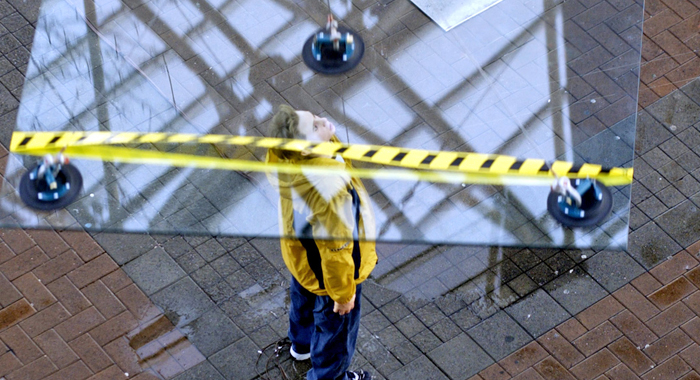 Final Destination knows that scares and laughs go hand in hand, and no matter how grim the tone of the film is, it is always accompanied by a wicked gallows humor that provides a nice release of tension. The films are brightly colored, they are fast-paced, and even many of the kills are so ridiculously elaborate that they make you laugh.

Much like Freddy Krueger in the latter Nightmare films, Death in Final Destination has a dark and sadistic sense of humor. It’s not enough to simply die – though the beauty of the first film is that the deaths are so simple you could easily see yourself falling for those tricks – but Death wants to make fun of you with a brutal, gory, and preposterously untimely demise, like a barbed-wired fence that whips loose and cuts you to pieces. Tanning beds, gym weights, elevators, laser eye surgery, trains — anything can be used to kill a character. This gave the Final Destination franchise endless possibilities to do whatever it wanted when it came to death scenes; on the other hand, there are only so many ways Jason Voorhees can dispatch a teenager with a machete.

Indeed, after the original movie, the sequels found delight in tricking the audience as they guessed how the characters would die. The film would introduce an obvious Chekhov’s gun, usually in the form of the protagonist having a vision, as in Final Destination 2 when Kimberly (A.J. Cook) notices a bunch of pigeons. Then the film shows the soon-to-be victim surrounded by said clue, as when Tim (James Kirk) sits in a dentist’s office full of dangerous equipment and watches the same pigeons fly in through the window – only for him to leave the dentist unscathed and fall victim to a giant glass pane that drops on him from above, crushing him. The film builds tension in making us think Tim will die at the dentist’s office, and when he actually meets his end, the over-the-top look of his crushed, unnaturally twisted body quickly turns the shock into a punchline.

THE SEQUELS ADD TO THE MYTHOLOGY 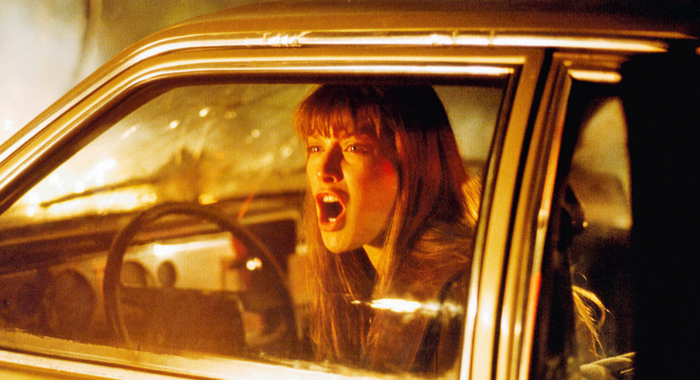 Each of the four sequels follows the same formula: a group of people managed to elude their own deaths, only to find themselves targeted by Death in the weeks to follow, hunted one by one in the order they would have originally died. However, each movie adds a bit of a twist to the way the survivors try to outrun their fates, building its mythology along the way.

In the first film, we discover that if you save someone’s life, Death skips them and goes after the next in line. Final Destination 2 brings back Clear Rivers (Ali Larter) from the first one to continue her arc and introduces the idea that new life cancels out death, while the third movie adds a “magic camera” that offers clues to how each character will die. Final Destination 5 makes the threat more human, as the characters believe killing another person will balance Death’s book. Even The Final Destination, which is considered the worst of the franchise, adds a fascinating new question: what if someone who isn’t the next in line tries to kill themselves? The answer, apparently, is that they won’t be able to.

Final Destination managed to stay fresh because it didn’t contradict its mythology, but added to it, providing new twists that made the series feel new each time. Few franchises, horror or otherwise, can boast that kind of inventiveness.

IT IS THE BEGINNING AND THE END OF THE FRANCHISE 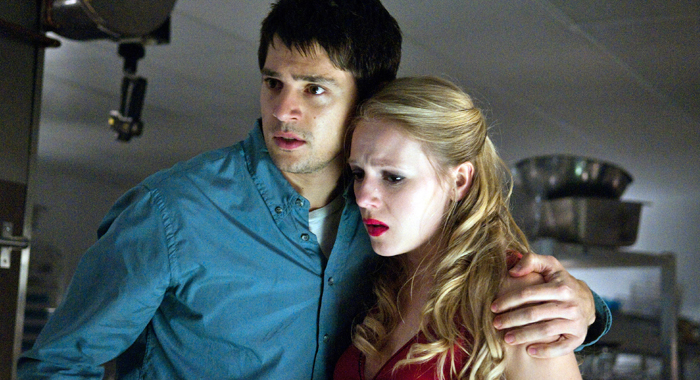 A potential future installment could change things, of course, but for the time being, Final Destination has the rare honor of being one of the handful of horror franchises to have not just an ending, but a satisfying one that brings everything full-circle and ties it all together.

In Final Destination 5, after the ominous Bludworth introduces the idea of balancing the books by killing an innocent person to inherit that person’s lifespan, we get what appears to be the very first happy ending in the franchise, as Sam (Nicholas D’Agosto) presumably saves Molly (Emma Bell) and himself by killing one of the other survivors. The film sees them move on with their lives by taking a trip to Paris. As they board the plane, they notice some commotion across the aisle involving none other than Devon Sawa’s Alex from the first film. Right then, the plane takes off and we revisit the very same explosion that kickstarted the original Final Destination, as audiences realize they’ve been watching a prequel all along.

It’s a clever way to bring the franchise back to where it started and wrap it all up with a nice little bow, and even if we never get another Final Destination, we’ll always have this ending, which once again shows that you can never really escape Death’s deliciously macabre design. 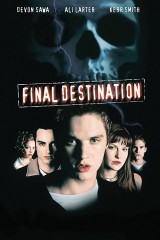 #1
Adjusted Score: 37615%
Critics Consensus: Despite a panel of X-Files' alums at the helm and a promising premise, flighty performances and poor execution keep Final Destination from ever taking off.
Synopsis: Alex Browning (Devon Sawa), is embarking on a trip to Paris. Alex experiences a premonition -- he sees the plane... [More]
Starring: Devon Sawa, Ali Larter, Kerr Smith, Kristen Cloke
Directed By: James Wong 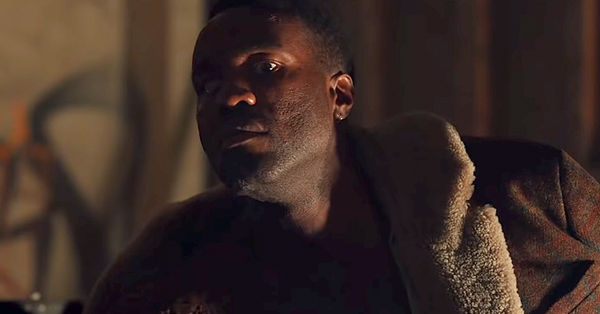 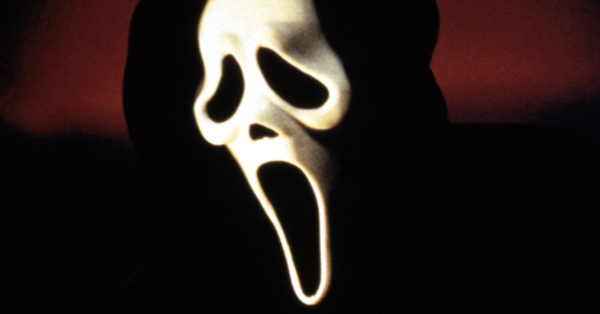 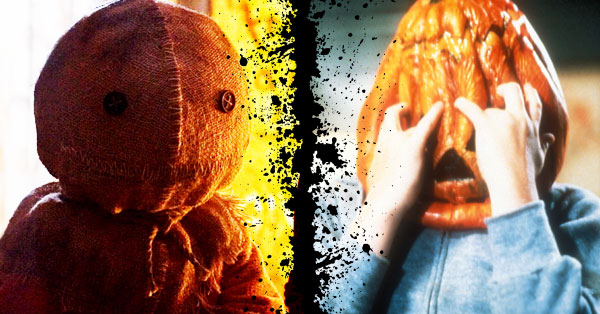 October Daily Double: A Scary Double Feature For Every Night This Month!