Everything You Need to Know About DC Universe's Doom Patrol Series

After the group's introduction on Titans, take a deep dive into the history and the future of the latest DC TV addition. 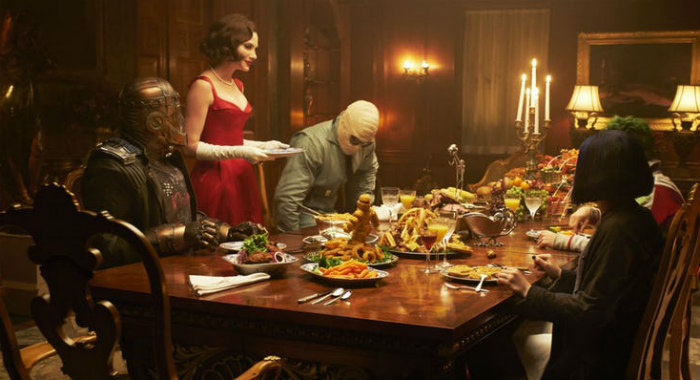 With Friday’s episode of Titans, the members of the Doom Patrol not only made their live-action debut on DC Universe, but also teased their own upcoming eponymous series thanks to voice cameos from stars Brendan Fraser and Matt Bomer and an in-the-flesh appearance by co-star April Bowlby. Portrayed as a group of misfits sheltering fellow oddity Garfield Logan (Ryan Potter), the characters also distinguished themselves from the Titans cast thanks to their strange circumstances, humor, and a family dynamic Dick Grayson (Brenton Thwaites) is far from cultivating.

Who and what are the Doom Patrol? How far back does the group’s DC Comics history go, and what does it say about the upcoming series? Read on for a primer on the world’s strangest heroes. 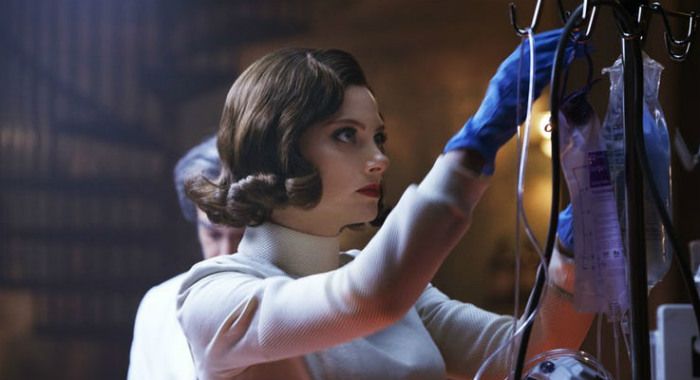 The Doom Patrol debuted as a strip in 1963 My Greatest Adventure #80, written by Arnold Drake and Bob Haney with art by Bruno Premiani. The initial four-member team was comprised of Rita Farr (a.k.a. Elasti-girl), an Olympic swimmer-turned-actor who can stretch to tremendous sizes after she is exposed to “unusual volcanic gases;” Cliff Steele (a.k.a. Robotman), a race car driver whose brain is saved after a car crash destroys his body; Larry Trainor (a.k.a. Negative Man), a test pilot whose body became negatively charged after exposure to radiation during a test-flight; and Dr. Niles Caulder (a.k.a. The Chief), a paraplegic genius and inventor who inspires the rest to use their augmented abilities for the greater good even as their conditions leave them outcast from a society which fears and hates them. If the premise reminds you of X-Men, which debuted two months after the first Doom Patrol strip, Drake always suspected Stan Lee somehow caught wind of his concept — though in his later years, he suggested they both reached for fruit from the same creative “vineyard” independently and simultaneously.

While Drake’s new superhero strip saved My Greatest Adventure from cancellation, the title was renamed Doom Patrol five issues later. In 1965’s Doom Patrol #99, Garfield Logan (a.k.a. Beast Boy) was introduced as the survivor of an experimental cure for a rare disease which gave him the ability to change into any animal. He remained with the group for a time before seeking his fortune in Hollywood and joining the Titans West.

Doom Patrol itself survived another three years before its popularity declined and the book was finally cancelled. In response to the cancellation and his own anger toward DC at the time, Drake took the highly unusual step of killing off the team.

A new team created by writer Paul Kupperburg — featuring a revived Robotman, a new Negative Woman, and Caulder’s previously unseen wife Celsius — emerged in 1977, but failed to capture the imagination of readers during an infamous downturn in DC’s fortunes known as The DC Implosion. Ten years later, Kupperburg tried again with a third Doom Patrol team, but he was replaced in issue #18 by Grant Morrison. The new take on the team, which saw Robotman, the Chief, and Negative Man return with new additions like Crazy Jane — a woman with dissociative personality disorder and a superpower for each of her personas — and a mobile, conscious street known as Danny — yes, an actual sentient city street — is considered one of the definitive versions thanks to its surrealist adventures and reinvention of the Chief as the team’s ultimate enemy.

After Morrison’s departure, writers including Rachel Pollack, John Arcrudi, John Byrne, and Keith Giffen took over Doom Patrol to varying degrees of success. In 2016, My Chemical Romance frontman Gerard Way revamped the concept for his DC Young Animal label. Featuring art by Nick Darrington, the new Doom Patrol went in new strange directions while honoring a lot of what came before — Robotman was present as ever while Danny became a world all his own. 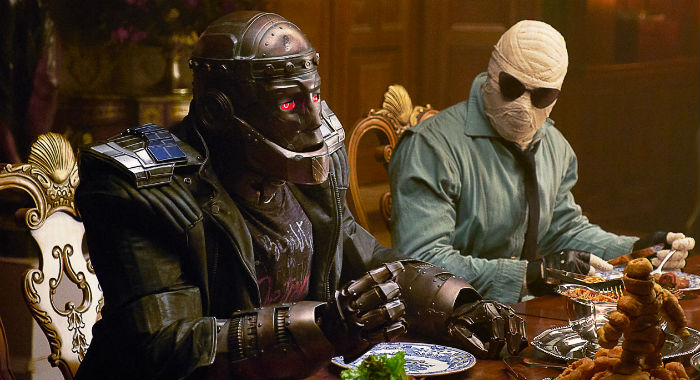 Much of Drake and Haney’s concept is on display within the “Doom Patrol” episode of Titans, with hints of Morrison’s influence. Fraser gives Cliff a wistful tone as Rachel (Teagan Croft) describes her dinner to him. Bomer’s Negative Man is the definition of hip. Rita Farr (April Bowlby) tries her best to keep her studio-trained composure, but it is easy to see the cracks in her facade as her powers always seem to get the best of her. As a group, though, the strong bond between them is already on display. At this point in Titans‘ own story, it is a welcome relief to see some superpowered beings acting as a family — but it also offers a tease of the dynamic viewers will eventually see on Doom Patrol.

With the Chief, played in the episode by a menacing Bruno Bichir, Caulder’s seeming benevolence falls away pretty quickly. By the time he has Rachel strapped to a hospital bed, one is willing to believe he arranged the accidents that caused Cliff, Larry, and Rita to become super-powered oddities.

Arguably the most important character to introduce here was Cliff. As a member of every Doom Patrol iteration, he is the de facto face of the whole concept. His condition — a human brain in a robot body — also makes him one of the easiest Doom Patrol characters to “get” and bond with. Luckily, Fraser voices the character as though he’d been playing Cliff for years, which is important as he will be playing Robotman for a long time to come. 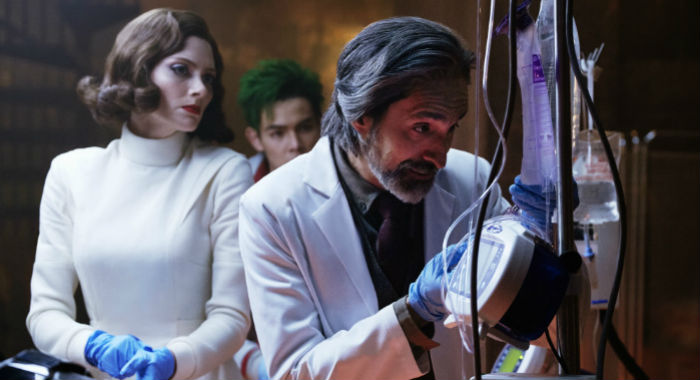 That long time to come will begin next year with the arrival of DC Universe’s Doom Patrol series. Fraser, Bomer, and Bowlby return as their characters, but actors Jake Michaels and Dwain Murphy, who inhabited the Robotman and Negative Man suits, have been replaced by Riley Shanahan and Matthew Zuk. And in a move that may seem surprising, one key Doom Patrol member will have a new face when they make the leap to their own series: the Chief.

In August, the streaming service announced that former James Bond, Timothy Dalton, would take over the Niles Caulder role. It is an inspired choice as Dalton is capable of both the compassion and menace Caulder can offer in equal measure. And after seeing Bichir’s take on the character, it makes sense to dial back Caulder to someone who would believably inspire the devotion Cliff, Larry, and Rita seem to have for the man.

Plus there is a story point to be built from Caulder suddenly having a new personality, face, and accent: In the early Doom Patrol strips, the gang did not know the Chief’s real name. Circumstances ultimately forced him to divulge these details, but it established Caulder’s secretive tendencies. And what better way to establish the grandiose nature of the Chief’s secretiveness on screen than for Cliff, Larry, and Rita to learn the man they thought gave them a home was nothing but a proxy?

The group seems off to a fine start as Fraser, Bomer, and Bowlby offer the three key characters a lot of life. On the Doom Patrol series, Diane Guerrero will join them as Crazy Jane from Grant Morrison’s run. The team will face off against Alan Tudyk’s Mr. Nobody, a character created by Drake for one issue but expanded upon by Morrison into a major team antagonist. The inclusion of the Morrison characters suggests the show will be more consciously absurd than their appearance on Titans would suggest, which would definitely be the right tone for this group. Additionally, missing Titan Cyborg (Jovian Wade) will give the Doom Patrol a mission that is difficult to refuse, but will completely alter their lives forever. The 13-episode series from longtime DC TV producer Greg Berlanti and Being Human‘s Jeremy Carver is expected to debut in February 2019.

It is unclear, however, if Danny the Street will make his presence known.

New episodes of Titans are released Fridays on DC Universe. Doom Patrol will premiere in 2019.