Everything We Know About The Haunting of Bly Manor

The Haunting of Hill House creator Mike Flanagan returns with another ghoulish literary classic and some familiar faces.

Mike Flanagan’s The Haunting of Hill House flouted horror adaptation conventions, retooling Shirley Jackson’s classic novel to portray scary supernatural events, as well as explore a family’s enduring trauma as a psychological thriller. Aesthetically, the Netflix series was reminiscent of the book’s previous movie adaptations, but with Flanagan — screenwriter and director of such horror fare as Oculus and Ouija: Origin of Evil — at the helm, the familiar tale veered into exciting, new, and intensely creepy territory.

The first season of the series was a hit and is now Certified Fresh at 92% on the Tomatometer with 92 reviews. 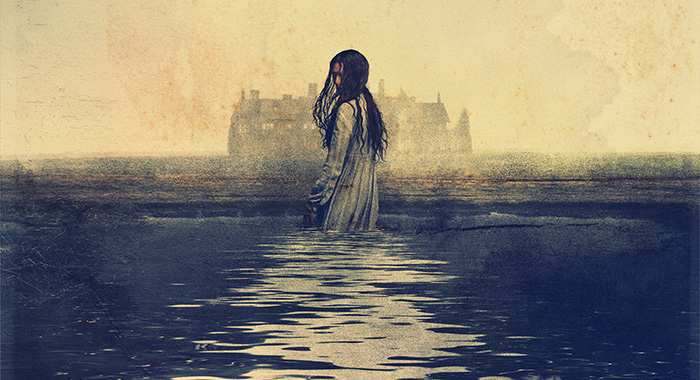 So where will season 2 go? As soon as the story of the Crain family ended in season 1, Flanagan confirmed to press that their tragic story was complete. The next installment will follow a new family’s story — in a completely different haunted house. With some familiar faces set to return, however, it seems Netflix’s Haunting series could become the streamer’s answer to American Horror Story.

“There’s not a narrative connection, but there are little Easter eggs, for sure, not only in small details but in moments of dialogue and in some of the ideas from Hill House,” Flanagan told Entertainment Weekly. “There are definitely going to be things that will set off that little dopamine rush that those kind of connections create. But it’s not a direct connection from a story point of view.”

As speculation swirls about the show’s upcoming sophomore season, here’s everything we know about The Haunting of Bly Manor.

ANOTHER LITERARY CLASSIC WILL BE ITS GUIDE 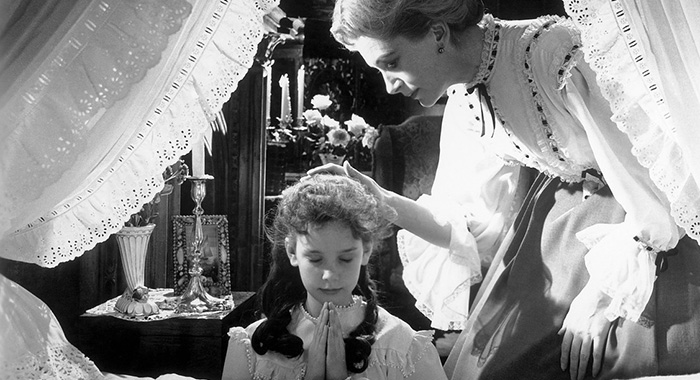 Flanagan has turned his attention to a different author’s work for this outing. In February, Netflix revealed that the next installment of the series will be titled The Haunting of Bly Manor based on Henry James’ 1898 Gothic horror novella The Turn of the Screw.

The story was adapted previously for the big screen in the 1961 film The Innocents, starring Deborah Kerr and Michael Redgrave, as well as in other feature films and TV movies as The Turn of the Screw. Another take on the tale, titled The Turning and starring Mackenzie Davis and Finn Wolfhard, hit theaters in January, but scared up only 11% on the Tomatometer.

“It’s such a treat to play in the world of Henry James … [but] You can skip rocks off of The Turn of the Screw,” Flanagan told EW. “So, we were able to open up his entire library of ghost stories, stuff that’s never been adapted, and build the whole season out with the entirety of Henry James’ supernatural library. And that has been a real treat, because we really get to do things that I’ve never gotten to see before. Turn of the Screw is really just our way in.”

For those unfamiliar, James’ classic story tells the tale of a young governess who heads to Bly Manor in Essex, England to keep an eye on an orphaned boy and girl. The governess then begins witnessing supernatural activity, becoming convinced the kids are being visited by ghosts.

Flanagan’s producing partner Trevor Macy said the series will feature nods to other works by James including “The Jolly Corner,” which is about a menacing doppelgänger, and “The Romance of Certain Old Clothes,” which tells the tale of two sisters and a mysterious chest of beloved dresses.

“The process is the same, in that it’s a literary remix,” Macy told Vanity Fair. “You want to update the story, you want to find whatever fertile ground for elevating the character that you can in the source material, but we obviously took some liberties in updating it with a more modern setting.”

SEVERAL MEMBERS OF THE HILL HOUSE GANG WILL RETURN 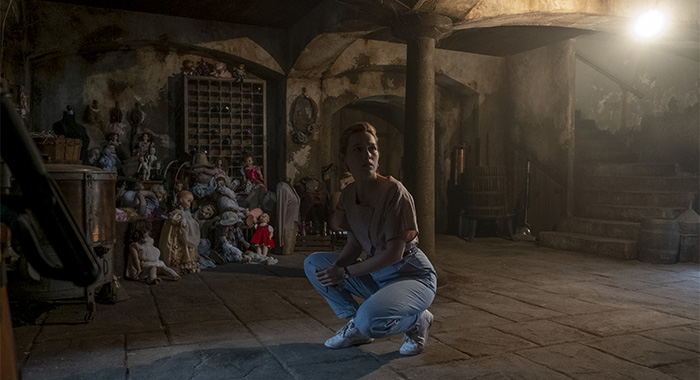 Flanagan has recently tweeted casting announcements for The Haunting of Bly Manor and revealed that Hill House‘s  Victoria Pedretti and Oliver Jackson-Cohen, whose connection as twins Nell and Luke Crain was the emotional foundation for that story, have both joined the new installment.

Pedretti steps into the role of American tutor Dani Clayton, who hopes to escape her own painful past by taking a job looking after the Wingrave children at the estate.

“Victoria and I talked at the very beginning about how to differentiate this character from Nell,” Flanagan said. “Nell was a character that carried around a ton of darkness with her and never quite got out of the shadows that she was introduced in when we see her as a child. Between the setting in the ’80s, and this idea of a young American abroad, just out on an adventure, it brightened everything up to begin with.”

Jackson-Cohen’s character is also drastically different from the drug-addicted little brother persona he took on in Hill House. Here, he’s playing Peter Quint, “a calculating business associate of the uncle’s who tends to take whatever he wants from Bly Manor, regardless of permission.” His character is lifted directly from The Turn of the Screw. 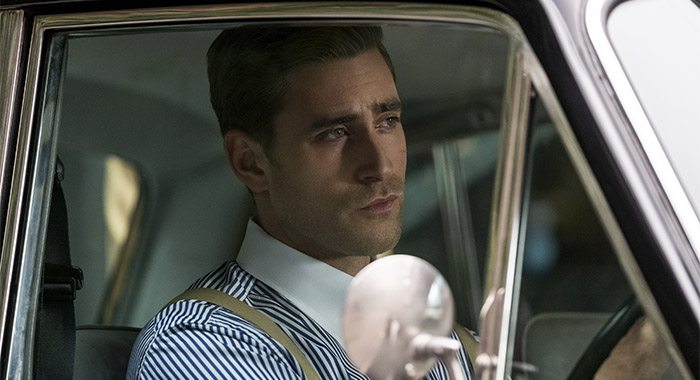 “Much is made about him in the book about being a very toxic person, and particularly toxic within relationships,” Flanagan continued. “One of the things that was exciting for Ollie this year, having played this very broken and vulnerable in season one, was to come in and play a villain, but trying to find a way to play a villain that wasn’t so simple. That was just something else we tried very hard to say: People are good and bad, all of us. Sometimes the dials are turned a little too far, or a lot too far, in one direction or the other.”

Kate Siegel, who played the troubled, be-gloved sister, Theo Crain, is a member of the cast here but the role she’s playing is being kept under wraps. Henry Thomas, who played young patriarch Hugh Crain, returns to the new installment as Henry Wingrave, the wealthy uncle of the two orphaned children. His character “wants little to do with the estate or the son and daughter of his late brother and sister-in-law.” He’s happy to support the kids from afar, as long as he doesn’t have to visit the manor himself. 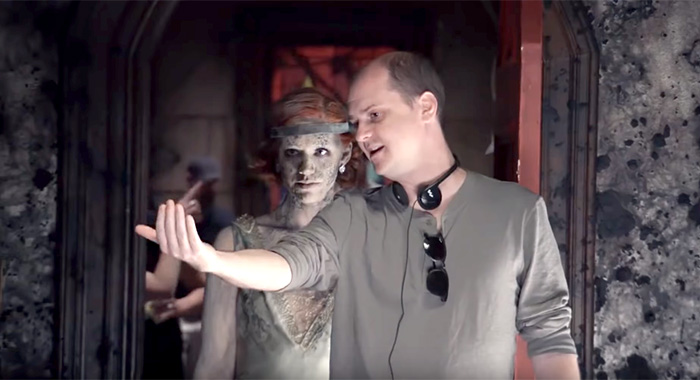 Catherine Parker, who played the 1920s-era flapper ghost Poppy Hill in The Haunting of Hill House, will also return for Bly Manor.

Almost a decade ago, I first worked with CATHERINE PARKER on a tiny movie called ABSENTIA. Last season, she was unforgettable as Poppy Hill… today, I’m thrilled to announce that she’s joining us at Bly Manor.

There hasn’t been any news on Carla Gugino’s return, but she expressed interest in returning to the series.

SOME NOTABLE NEW FACES WILL JOIN THE SHOW 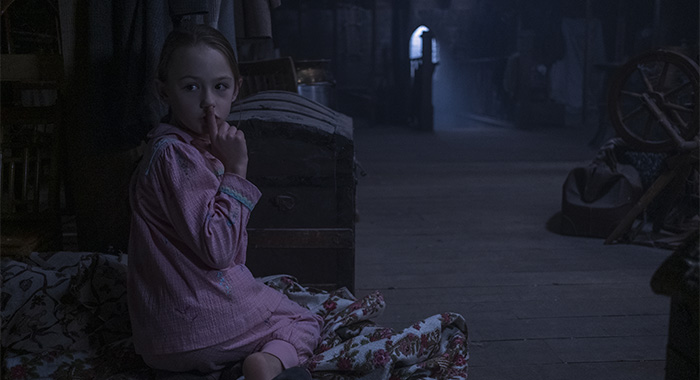 New actors joining the mix include iZombie fan favorite Rahul Kohli, who has signed on as a series regular. Deadline describes his character as “a small town guy with a worldly mindset, who was returned to the country to take care of his ailing mother.” Amelia Eve is the skeptic groundskeeper Jamie. According to Vanity Fair, both of these characters are “strangely untouched” by the sinister goings on at Bly,

Flanagan has tapped T’Nia Miller (Years and Years) to play the manager of Bly Manor, Hannah Grose, who is described as “dependable” and possibly “in denial” about what goes on there. Tahirah Sharif plays the children’s previous governess, Rebecca Jessel, who falls victim to the inexplicable forces of Bly Manor.

MIKE FLANAGAN WON’T BE DIRECTING EVERY EPISODE, THIS TIME AROUND

Narrative cohesion was a big component that helped The Haunting of Hill House‘s success. And while Mike Flanagan is still involved with the second installment of the series, it seems that this time around, the Doctor Sleep helmer is divvying up the directing responsibilities to up-and-comers in the filmmaking world.

I’m really excited to be collaborating with some of my favorite filmmakers on THE HAUNTING OF BLY MANOR. Yolanda Ramke & Ben Howling, Ciarán Foy, Liam Gavin, and Axelle Carolyn are all directing episodes. @Yolanda_Ramke @BenHowlingFilm @citadelfoy @LiamGavin @AxelleCarolyn

Among the group joining the project are co-directors Yolanda Ramke and Ben Howling, whose movie Cargo offered a new, bleak twist to the zombie genre; Ciarán Foy, who made his debut in 2012 with film festival darling Citadel; Liam Gavin, the writer and director behind the 2009 award-winning horror film Dark Song; and Axelle Carolyn, the writer and director behind the Tales of Halloween segment, “Grim Grinning Ghosts.”

While it’s not yet been confirmed if Flanagan will helm any episodes in the new installment to the series, the addition of these names reaffirms the filmmaker’s affinity for the genre’s independent storytellers.

THE HUNT FOR HIDDEN GHOSTS WILL CONTINUE

Bly Manor’s themes and tone will be different this time around, one thing we do know is the ghosts will continue to appear in the background. But this time, they will present a clear connection to the story.

We are already discussing how to up our hidden ghost game. https://t.co/rW4AW0LpF2

“This season we wanted our hidden elements to tell their own story,” Flanagan told Vanity Fair. “And very much unlike the first season, they’re actually going to be explained. By the end of the season, you’re going to know who they are and why they’re there.” 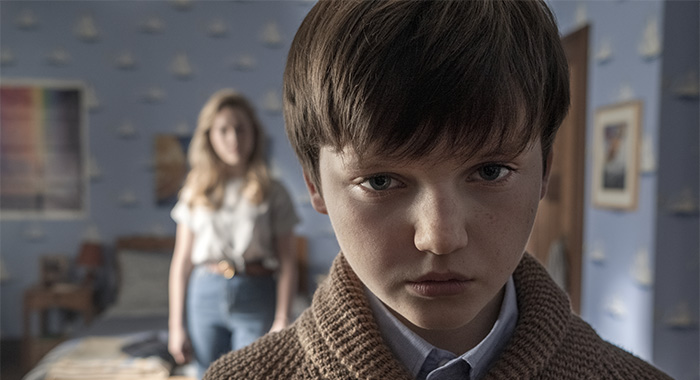 Flanagan revealed that this new story will be a “tragic star-crossed romance,” deviating from the brooding themes of the first season. But while the upcoming installment will feature a more colorful, lively ’80s aesthetic (the majority of the season takes place in 1987), the show’s creator promises the fright factor will be kicked up a few notches.

“For Henry James fans, it’s going to be pretty wild,” Flanagan said, “and for people who aren’t familiar with his work, it’s going to be unbelievably scary. I already think it’s much scarier than season 1, so I’m very excited about it.”

WHEN WILL IT PREMIERE?

Netflix has announced that The Haunting of Bly Manor will premiere on Friday, October 9, 2020.

While you wait for it to roll around, grab a slice and… 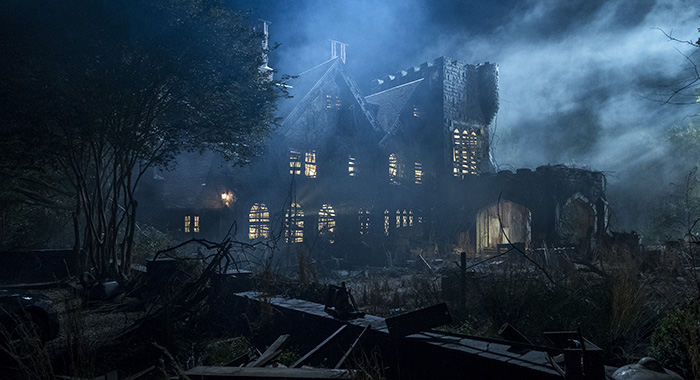 To ease our collective hunger for the ghastly and ghoulish, an extended director’s cut of the season that King called “close to a work of genius” is now available.

THE HAUNTING OF HILL HOUSE, revised and remodeled by Mike Flanagan. I don't usually care for this kind of revisionism, but this is great. Close to a work of genius, really. I think Shirley Jackson would approve, but who knows for sure.