Everything We Know About Peacock, NBCUniversal’s Streaming Service

Peacock launches July 15. Here's how much it'll cost, what original content it will have, and what TV and movies you'll be able to stream.

Here it is, the only excuse you’ll ever need to never leave your house again: more than 40(!) seasons total of Law & Order and its spin-off series. Dick Wolf’s much beloved franchise is among the biggest draws of the new Peacock streaming service, which will launch on July 15.

(Rotten Tomatoes is also a division of NBCUniversal.)

The official name for the new competitor to Netflix, Hulu, Apple TV+, Disney+, and the recently-launched HBO Max: Peacock. (Yes, like the company logo.)

When Does It Launch?

Comcast customers got a “sneak peek” on April 15. Other viewers get access to the service on July 15. The timing was meant to coincide with the Summer Olympics in Tokyo, which have now been postponed due to health concerns stemming from the coronavirus pandemic.

How Much Will It Cost and Where Can I Watch It?

Peacock will be both advertising- and subscription-supported.

Peacock Premium begins at $4.99 a month and includes some ads. There’s an option to go ad-free for an additional $5 a month. The minimal-ad offer is currently bundled at no cost Comcast’s Xfinity X1 and Flex customers and a similar trial promotion will be available at launch to Android and Android TV users and some others. Starting on July 20, this tiered model will also be available on Sony Interactive Entertainment’s PlayStation 4 systems. As of now, it will not be accessible through Roku and Amazon Fire TV.

Those who don’t want to shell out for a(nother) streaming service can partake of Peacock Free, the fully ad-supported tier.

And about that lineup …

What Can I Watch On It? 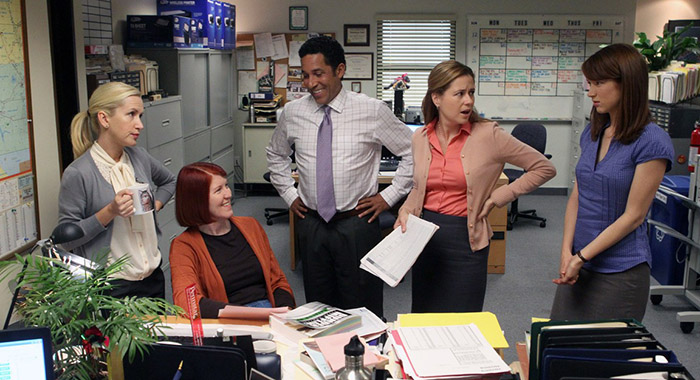 In addition to every season of the original Law & Order, and spin-offs Law & Order: Special Victims Unit, and Law & Order: Criminal Intent, Dick Wolf’s Chicago franchise — Chicago Fire, Chicago P.D., and Chicago Med — will stream on Peacock. Other recent and classic series on the service, or that will eventually be on the service, include:

Through a content licensing agreement with ViacomCBS, Peacock’s library will also include TV shows like Ray Donovan, The Affair, Everybody Hates Chris and Real Husbands of Hollywood. Classic films from the Paramount library, such as The Talented Mr. Ripley, The Godfather trilogy and Catch Me If You Can, will hit Peacock in limited exclusivity windows throughout 2021, 2022 and 2023.

The film selections on offer will also include exclusive streaming rights for Universal movie releases such as Jurassic World 3, Trolls World Tour, The Boss Baby 2, and The Croods 2, as well as back catalog entries like American Pie, A Beautiful Mind, Back to the Future, Bridesmaids, Brokeback Mountain, Casino, Dallas Buyers Club, Do the Right Thing, Erin Brockovich, E.T., Field of Dreams, Jaws, Knocked Up, Mamma Mia!, Meet the Parents, Meet the Fockers, Shark Tale, Shrek,  The Breakfast Club, plus films from the Bourne, Despicable Me, and Fast & Furious franchises (including Fast & Furious 9).

English football fans can cheer that NBC Sports and Peacock will also broadcast more than 175 exclusive Premier League matches on Peacock Premium during the 2020-21 season and that, in total, that tier of the service will have than more than 1,500 hours of Premier League live match and shoulder programming.

Talk shows and news will also feature into Peacock’s program offerings, with, beginning in July, Peacock Premium viewers getting exclusive early access to that night’s airings of The Tonight Show Starring Jimmy Fallon (at 8 p.m. ET) and Late Night with Seth Meyers at 9 p.m. ET. Also, with the election just months away, breaking news coverage is part of Peacock’s programming. NBC Nightly News with Lester Holt, and daily selections from Today and Meet the Press with Chuck Todd will stream on the service.

Programs available upon launch include:

Some programs in the works: