Everything We Know About Ms. Marvel

Newcomer Iman Vellani stars as Kamala Khan, a Pakistani-American teenager from Jersey City who finds herself wielding great powers like her favorite superheroes.

Marvel finally released a trailer for their upcoming Disney+ series Ms. Marvel on Tuesday, a moment long-awaited by those who love the character and anticipated her introduction into the Marvel Cinematic Universe. We imagine she’d be very excited about it, too, being one of the great fangirls within the Marvel Comics universe.

Debuting in 2013, Ms. Marvel (aka Kamala Khan) quickly embiggened her way into readers hearts and animated Marvel animated shows, like Avengers: Ultron Revolution, voiced in most of those outings by Kathreen Khavari. Her quick appearance in the animated corner of the Marvel framework suggested a live-action adaptation would soon happen as well. In 2018, Marvel Studios president Kevin Feige said a plan for the Captain Marvel superfan’s introduction into the MCU was in the early stages. At the time, many thought this might be a feature film – we even listed in our ever-evolving chart of the studio’s upcoming projects as a movie for a time – but Feige took the stage at the 2019 D23 Expo to announce the character would get her own series as part of their ongoing Disney+ initiative. Although details were scarce during the presentation, he mentioned one detail: “You will meet her in her Disney+ series and see her in our films.”

Of course, a global pandemic and the usual rigors of development led to some delays. But with the arrival of the first trailer, the series has a release date: June 8. The preview offered the first sustained glimpse of the series (very brief moments were included in earlier Disney+ and Marvel Phase 4 sizzle reels) while also, seemingly, setting up a point of departure between the MCU’s Kamala and her comic book counterpart. So let’s take a look at everything we know about Ms. Marvel and discuss how these changes may affect her future in the movies.

Embiggening the Tale of Kamala Khan 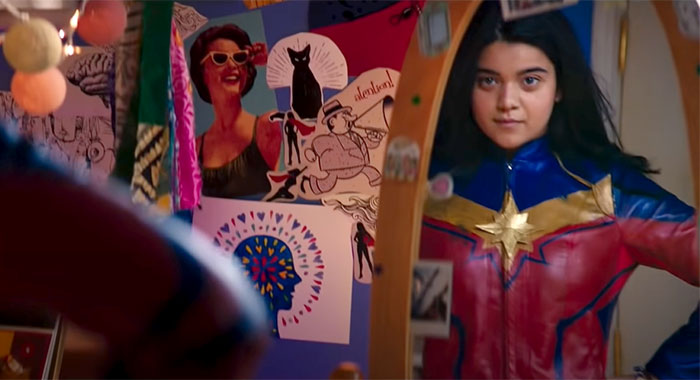 According to Disney+, the show centers on Kamala, a “Muslim American teenager growing up in Jersey City” who “feels like she doesn’t fit in at school and sometimes even at home — that is, until she gets super powers like the heroes she’s always looked up to.” The synopsis also asks the question, “Life gets better with super powers, right?”

Like with Peter Parker before her, the answer to that is not always clear, and we imagine the series will examine the conditional statements involved in life getting better and worse with powers. Judging from comics, the streaming version of Kamala will likely face conflicts with her family and their expectations of her, while also  being unable to reveal her abilities to them. Outside of her home, her friends – whether Muslim or not – create friction as only a few share her love of superheroes or a basis of understanding for some of the choices she makes. Add to that the superhero community itself and its tendency to recruit teenagers without adequate regard to their safety.

Although, we’d like to think Carol Danvers (Brie Larson) might be a little more cautious than Tony Stark in that regard, but the teen sidekick problem is a discussion for another day. 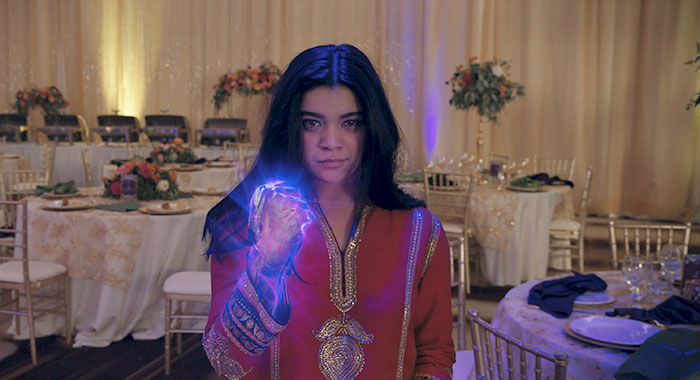 One big difference on display in the trailer, though, seems to be Kamala’s powers. In the comics, they come from her Inhuman ancestry (a concept covered in Marvel’s Agents of S.H.I.E.L.D. and Inhumans) and manifest as a form of shape-shifting with a side order of mass-manipulation to increase strength. From the few glimpses we get in the preview, her powers appear more cosmic in origin – seemingly coming from the use of Nega-Bands of Kree origin (a pull from Captain Marvel comics of the 1970s) – and presenting more as a forcefield power than shape-changing. Some on the internet have already suggested the change is meant to make her visually distinct from Fantastic Four’s Reed Richards, whose shape-changing is confined to elongation, but looks quite similar to Kamala’s power on the page. Some have also guessed the change is due in part to the cosmic twist for the MCU Kamala in lieu of reintroducing the Inhumans concept, an idea seemingly burned with the dismal reputation of the short-lived Inhumans television series.

If her powers come from the Kree artifacts, it may help to explain why she’s headed to stars next year instead of meeting the Inhuman king in Attilan. That definitely comes with some benefits, storywise, but it also means the chance of seeing Kamala taking care of lovable Inhuman dog Lockjaw are far less likely.

The World of Ms. Marvel 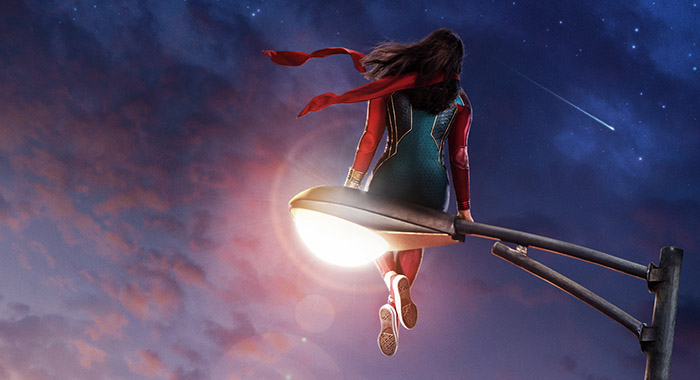 As in the comics, Kamala’s story takes place across the river from Manhattan in Jersey City, New Jersey. While still having some of the Marvel New York vibe, it is a more mundane place – and more suitable for the invasion of weirdness that comes along with Kamala’s powers. The trailer’s shot of Kamala looking longingly at Manhattan is no accident. Even with powers (and maybe some Kree agents hunting her?), Jersey City is still a pretty dull place to grow up.

Curiously, though, the series also shot a time in Thailand, suggesting Kamala’s journey will take her to a very unexpected corner of the MCU. Is it possible she may still make it a revised Inhuman capital or a Kree outpost? Right now, we’re inclined to think the latter as it will put her in the right place for her feature film debut. Alternatively, it could just be Thailand for reasons of plot.

The Cast of Ms. Marvel 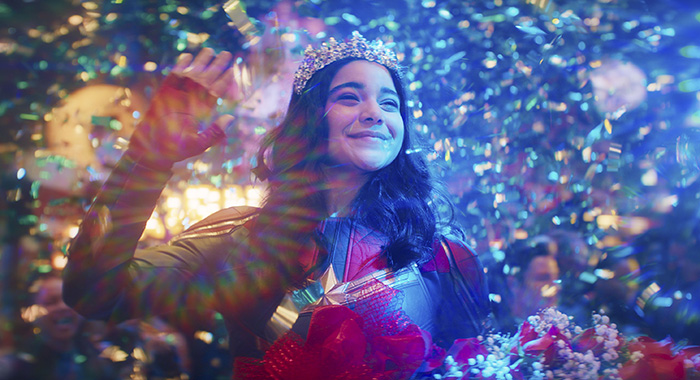 Iman Vellani stars as Kamala. Described as “an avid gamer and a voracious fan-fiction scribe, Kamala is a Super Hero mega fan with an oversized imagination — particularly when it comes to Captain Marvel.” The description is not only true to the comic book character created by Sana Amanat, Stephen Wacker, G. Willow Wilson, Adrian Alphona, and Jamie McKelvie, but of an audience both Disney and Marvel are eager to court. And, we have to admit, Kamala’s enthusiasm for geeky things is pretty infectious in the comics, so we hope it translates well to the screen.

Shroff, Kapur, and Shaikh will appear as Kamala’s family — mother Muneeba, father Yusuf, and older brother Amir, respectively. The dynamic between them is teased in the trailer, and we’ll honestly be shocked if they do not learn the truth about Kamala at the end of the season. Maintaining a secret identity in the MCU is just impractical in the long run.

Lintz plays Kamala’s best friend, Bruno Carrelli, who can be seen both supporting her in the trailer and helping her test the Nega-Bands in the trailer. Fletcher appears as Kamala’s more traditionalist friend, Nakia. Knight plays Kareem, a character who may or may not adopt the “Red Dagger” identity (like his comic book counterpart). And as seen in the trailer, Shah plays Kamran, the apparent love interest. Additionally, reports indicate Laurel Marsden will appear as frenemy Zoe Zimmer. The rest of the roles, though, remain under the Marvel veil of secrecy. Although, it is easy to suspect they represent a mix of further high school characters, members of the community, and at least one or two of those shadowy (and potentially Kree) agents.

The People Behind the Scenes

Bisha K. Ali serves as the head writer. She is a veteran of Sex Education and Loki. Directors include Bad Boys for Life’s Adil El Arbi and Bilall Fallah, who reportedly helmed the first and last episode of the season. Meanwhile, documentary filmmaker Sharmeen Obaid-Chinoy directed three of the episodes and Meera Menon took point on the remaining episode. If the trailer is anything to go by, we’re looking forward to the more mixed-media, comic book inspired viewpoint Kamala seemingly enjoys while dealing with her humdrum world. How she sustains that once she gets the Nega-Bands is anyone’s guess. And while we’re speculating, who had the bands to begin with? Someone close to her must also be hiding a Marvel-sized secret.

When Does Kamala’s Journey Begin? 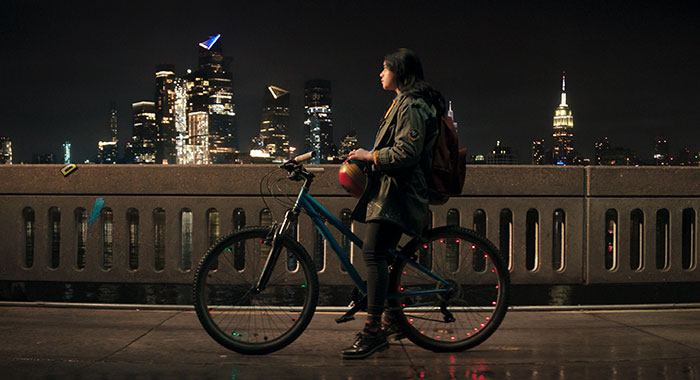 After a delay to sync the series up with the upcoming Marvel feature, The Marvels, the program will debut on June 8. After it concludes, Feige will make good on his word with Vellani reprising her role in that Captain Marvel sequel alongside star Larson and WandaVision’s Teyonah Parris, who returns as Monica Rambeau. That film is currently scheduled for a February 17, 2023, release.

Once Ms. Marvel is available in full, it will be interesting to see how a teenager from Jersey City makes her way to the cosmic landscape that is Carol’s life. Will it happen with a post-credit cameo from Larson as Carol or will Kamala get recruited by a Skrull? Considering the latter occurred to Rambeau, maybe it will be something even stranger or, perhaps, Nick Fury (Samuel L. Jackson) will be on hand to make introductions.

But like her comic book counterpart, the sky isn’t even the limit for Kamala. Even if it means a second season won’t be in the cards until 2024 if at all.