Everything We Know About Marvel's Hawkeye

We break down the setting, the time frame, the major characters, and a few possible storylines from the comics that could appear in the latest Disney+ series.

Well before there was a script for Marvel’s Avengers, it was clear Clint Barton would be a member of the team. Marvel Studios made a deal with actor Jeremy Renner in advance of the film and he made his debut in Thor as the S.H.I.E.L.D. agent with a singular talent for archery. More details about him would have to wait, though, for Avengers: Age of Ultron, as the first film was already stuffed with story threads from the other heroes’ films. Nevertheless, Renner bided his time as a Marvel guest character, knowing a starring role would eventually materialize.

Meanwhile, back in the Marvel Comics universe, Clint was enjoying a new inrush of fans as he starred in a Hawkeye series from writer Matt Fraction and principal artist David Aja. The stylish, indie-tinged series set out to reveal what Clint does when he’s not with the Avengers. The answer, as it turned out, was as eventful as any mission with the team. He inherited a building, had to save it from a crime family with a love of tracksuits, adopted a dog, and worked with Young Avengers‘ Hawkeye, Kate Bishop, to survive the impossibility of existence and drink coffee.

These two strands of Hawkeye’s existence are about to collide in Disney+’s upcoming Hawkeye series. As the recently uploaded trailer for the program reveals, Renner’s version of Clint will be meeting foes (and allies) in a tale Disney and Marvel are positioning as the feel-good superhero action series of the holidays. So let’s take a look at what we know about the series so far and determine just how much more like Hawkeye Clint can get. 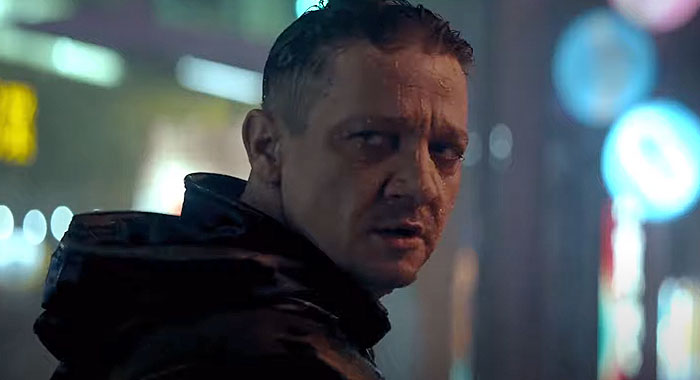 Based on the trailer, it’s clear the story will be set during the 2023 holidays, a handful of months after the events of Avengers: Endgame. Clint brings his children to New York for this special trip because, as he puts it, he’s “making up for lost time.” So, clearly, both he and the kids are still adjusting to the reality of the Blip and the five years Thanos (Josh Brolin) stole from them. But soon, Clint learns someone else has become Ronin, the costumed persona he adopted during those five years of darkness. As glimpsed in Endgame, Ronin was a ruthless and relentless scourge to the criminal underworld. His campaign was so intense, in fact, that few of the surviving Avengers believed Natasha Romanoff (Scarlett Johansson) could bring him in from the cold.

And, clearly, some of that past will catch up with him even if the person in the Ronin costume is Kate Bishop (Hailee Steinfeld), the self-professed “world’s greatest archer.” Of course, she has problems of her own – otherwise, why dress up as Ronin in the first place? Based on the Young Avengers and Hawkeye comics, we expect some of those problems will be very close to home. Also, according to comments made by Renner and Marvel Studios president Kevin Feige ahead of the show’s production, Clint will mentor Kate in some capacity.

The meeting of Hawkeyes, meanwhile, will lead to plenty of action, some silliness, and (we hope) the best look at Clint’s life outside of Avenging yet seen in the Marvel Cinematic Universe.

A Return To Old New York 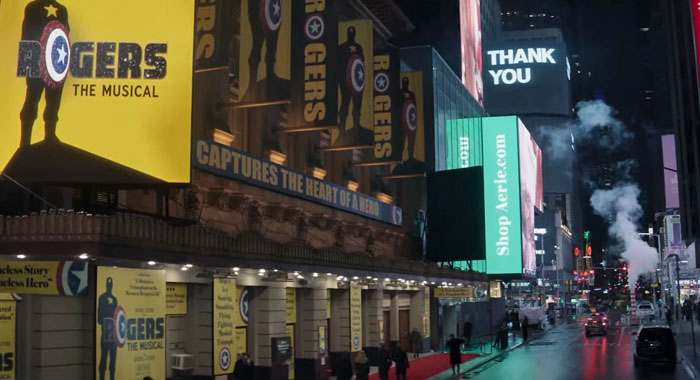 Of course, no Hawkeye series based on the Fraction and Aja comic book would be complete without New York and the trailer makes it clear most of the series will stick to the five boroughs. For close watchers of the MCU’s ever-evolving landscape, getting a look at the city ahead of Spider-Man: No Way Home will be of particular importance. For one thing, there will be Easter eggs like the Rogers musical on Broadway, but we imagine the series will also contain a few echoes to Endgame’s nearly deserted New York and offer some details about how that desolate New York reshaped itself into the one glimpsed in The Falcon and the Winter Solider and Spider-Man: Far From Home. As it happens, there is room here to make pointed references to The Daily Bugle and the Global Repatriation Council.

Also, the glimpses of Manhattan in the Hawkeye trailer sure remind us of the same island featured in the Netflix Marvel shows. Hope springs eternal that it may mean the return of a Wilson Fisk or Jessica Jones – even if just as mentioned characters somewhere along the way. Of course, only rumors suggest such a thing occurring.

A True Cast Of Characters 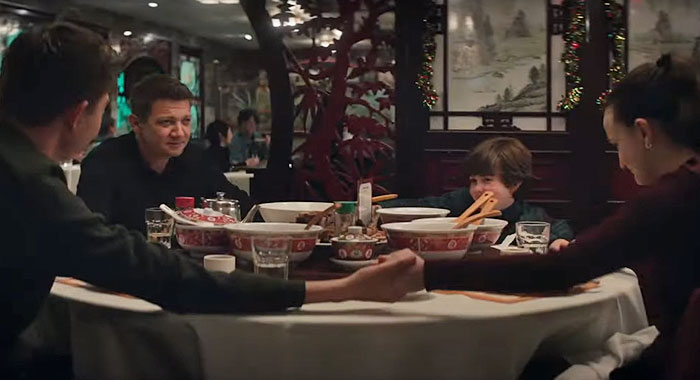 As mentioned earlier, Renner returns as Clint. Or, more specifically, the MCU version of Clint. He differs from the comic book character in a couple of key ways. For one, MCU Clint is a devoted husband and father. Back in the comics, Clint’s love life is the butt of many, many jokes as he’s romanced a number of women over the years (even married at least one person), but always screws up his relationships. And as for kids, well, there is an unfortunate story there, but the Clint of the Fraction and Aja comics was in no place to be a father.

Curiously though, the trailer hints at MCU Clint accruing some of the comic book character’s energy during the five years his family ceased to exist. We also expect Clint to reckon with being a remorseless killer for much of that time and discover what it means to reintegrate into a family who experienced none of the turmoil during the Blip.

Joining him on this adventure is Steinfeld as Kate Bishop. It remains to be seen how she will differ from her comic book counterpart, but we will say this: she is Hawkeye. Like comic book Clint, things never quite go her way even though she is a more successful at adulting. And thanks to a story written by Fraction and drawn by Annie Wu – and expanded upon in a subsequent series by Kelly Thompson and Leonardo Romero – Kate has a wonderful, down-on-her-luck private detective vibe. And with Steinfeld in the part, she might be the most significant addition to the MCU roster from the Disney+ programs so far. Although, we freely admit we may be biased. 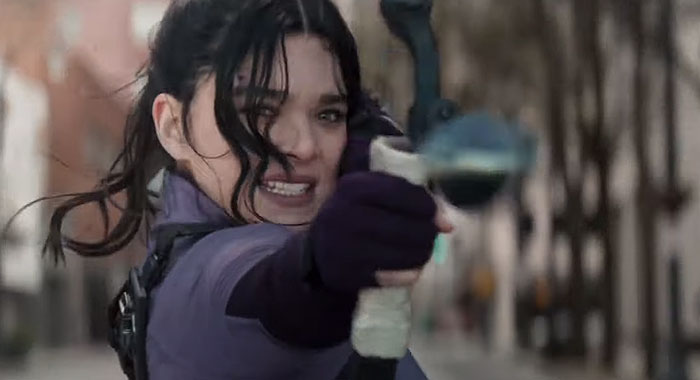 The series will also feature Vera Farmiga as Kate’s mother Eleanor – a key clue into Kate’s story as her mother is quite significant in her comic book storylines — Alaqua Cox as Maya Lopez (the deaf assassin known as Echo); Fra Fee as the mercenary Kazi; Tony Dalton as Jack Duquesne, a man with key ties to Clint’s past; Zahn McClarnon as Maya’s father William Lopez; and Brian d’Arcy James in an undisclosed role. Ava Russo, Ben Sakamoto, and Cade Woodward also return as Clint’s children. And perhaps most importantly, a golden retriever named Jolt takes on the iconic role of Lucky the Pizza Dog. Hopes are already riding high that an episode will adapt the issue of Hawkeye which is seen from Lucky’s point of view.

Also, Florence Pugh is expected to turn up at some point as Yelena Belova. If you recall her final scene in Black Widow, Contessa Valentina Allegra de la Fontaine (Julia Louis-Dreyfus) points her in Clint’s direction as the person most responsible for Natasha’s death. We expect that confrontation will be crucial to the story and, hopefully, lead to at least one reveal about the Contessa’s plans. 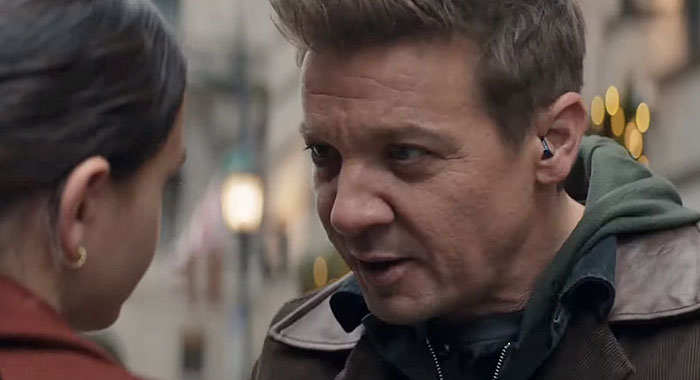 Hawkeye’s head writer is Jonathan Igla, a veteran of Bridgerton and Sorry for Your Loss. Other writer’s include Katie Mathewson and Tanner Bean. On the directing side, episodes will be helmed by Amber Finlayson and Katie Ellwood (who go by the directing name Bert and Bertie) and Comrade Detective’s Rhys Thomas, a group of talent who suggest Hawkeye will be one of the lighter Marvel shows, which is in keeping with the Fraction-written comic book. The source material still hit on some serious topics, though, and saw Clint’s hearing loss take on a new prominence. Set photos from the series suggest MCU Clint will lose some of his hearing during the program, and a few shots from the trailer reveal what appears to be a hearing aid in Clint’s ear.

Filming took place in New York and Georgia across the 2020 holiday and into Spring of 2021. Photos of Steinfeld in costume circulated widely one week before Marvel confirmed her involvement in the program. Subsequent pictures also confirmed Fraction’s Tracksuit Mafia, so expect the utterance “bro” to get stuck in your head.

The six-episode series debuts November 24 on Disney+ with episodes streaming weekly through December 29. And as it is part of Marvel Studios’ second TV show round, it is unclear if the program will continue for a second season, but we can easily imagine Kate moving to the West Coast and becoming a P.I. in Season 2.