Everything We Know About American Horror Story: 1984 So Far

A full-length trailer gives a closer look at the latest installment of the horror anthology series. What twist does über-producer Ryan Murphy have in store for fans this time?

FX’s anthology hit American Horror Story returns this fall. With a late September season premiere, season 9 will run straight through Halloween and beyond. We’ve devoted part of our summer to piecing together what the new season, 1984, is about.

Every season of American Horror Story is secretive. After the success of Murder House, Asylum, Coven, and Freak Show, series creator Ryan Murphy became even more cagey — much to the frustration of television journalists scraping around for even the smallest details. He has revealed a tad more about American Horror Story: 1984 than he did about previous seasons, however.

Here is everything we know about American Horror Story: 1984 so far from teasers, interviews, Murphy’s own Instagram feed, and the first full-length trailer.

Every season of American Horror Story has tackled a subgenre of horror. Murder House was a haunted house. Coven was witchcraft. Cult was, well, cult but applied to present-day politics. Apocalypse was the end of the world. Hotel was true crime mixed with the surreal and supernatural. Murphy confirmed that AHS: 1984 would tackle the slasher genre.

“This has been an area that Ryan has talked about since I’ve known him, and it’s just a real sweet spot for him. And I think it was time for him to do it,” AHS executive producer Tim Minear told The Wrap.

WE KNOW WHEN IT’S SET

Duh, it’s going to take place in 1984. That’s the one thing the title gives away.

The ’80s were prime time for slasher movies like the prolific Friday the 13th series and its imitators like April Fool’s Day, Sleepaway Camp, Prom Night, Slumber Party Massacre, Silent Night Deadly Night, and more. The Nightmare on Elm Street series began in 1984 and positioned Freddy Krueger in the subconscious dream world to do his slashing. Halloween began in 1978, but its sequels continued through the ’80s.

WE KNOW WHERE IT TAKES PLACE

A teaser showed a group of counselors arriving at “Camp Redwood,” and we see more of what appears to be the season’s main setting in the full-length trailer. This seems to be Murphy’s version of Friday the 13th’s Camp Crystal Lake. Then again, it could be a misdirect. Murphy is never afraid to add a twist to the obvious — could it be a movie within the TV show?

WE KNOW WHO IS IN THE CAST

To celebrate the first day of filming the NINTH Season of AMERICAN HORROR STORY, here's the official 1984 cast announcement along with some amazing 80s lewks. Enjoy!

Thanks to Murphy’s initial Instagram post, we do have a roster of AHS: 1984 cast members. They include regulars from AHS and other Murphy series, and some new faces. Emma Roberts, Billie Lourd, John Carroll Lynch, Leslie Grossman, Cody Fern, Matthew Morrison, Angelica Ross, DeRon Horton, Zach Villa, and Olympic skier Gus Kenworthy (making his acting debut) will all appear.

Please tell us those are their actual costumes in the series!

THE COUNSELORS ARE EXPERIMENTING

Sex = Death was the equation of the Friday the 13th movies. Jason Voorhees would punish counselors for hooking up, mainly because he drowned while counselors were busy having sex. In Murphy’s updated version of the 1984 slasher, that includes same-sex pairs exploring their desires. Unfortunately, they’ll probably share the same fate as Jason’s victims.

We’ve seen images of the AHS: 1984 killer in his hooded slicker and his weapon of choice, the curved scythe. Now the trailer reveals his origins: Mr. Jingles escaped from a mental hospital one rainy night, and he’s returning to the campsite of his previous legendary massacre.

AHS: 1984 REMEMBERS THE VALUES OF PEDESTRIANS

When you think about ‘80s slasher movies, you think about masked killers and teenage victims. American Horror Story remembers much more, like how pedestrians would often cause problems for our victims — er, heroes — on the way to their fateful destinations. Think: the hitchhiker in Texas Chainsaw Massacre, the locals warning them to turn back, or the fisherman in I Know What You Did Last Summer. AHS: 1984 has a pedestrian the campers hit with their car and a local who warns them, “You’re all gonna die.” 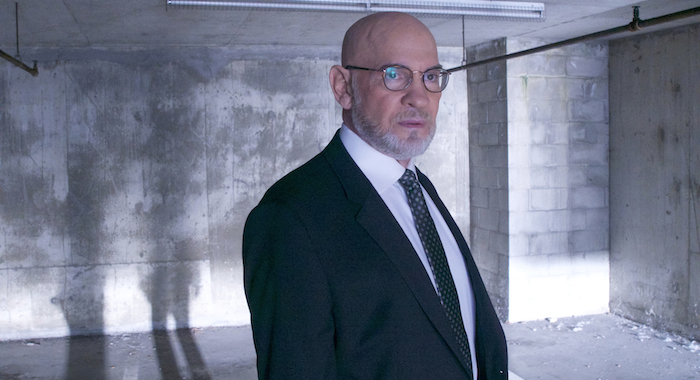 Wes Craven made Freddy Krueger a household name, but AHS: 1984 found a deeper Wes Craven cut. The X-Files veteran Mitch Pileggi starred as Horace Pinker in Craven’s Shocker, about a killer who used the power of electricity to transfer his soul into other bodies, and eventually into your TV set. In AHS, Pileggi (pictured above in Fox’s X-Files revival) plays a hospital administrator dealing with Mr. Jingles’ breakout.

WE KNOW WHO GUS KENWORTHY PLAYS

That special moment when you realize you have an Olympic medal AND will be playing Emma Roberts’ boyfriend on “American Horror Story” Season 9.

Thanks to another Murphy post, at least one character is revealed. Kenworthy plays Roberts’ boyfriend. Now, who is Roberts playing?

EIGHT IS ENOUGH FOR SARAH PAULSON 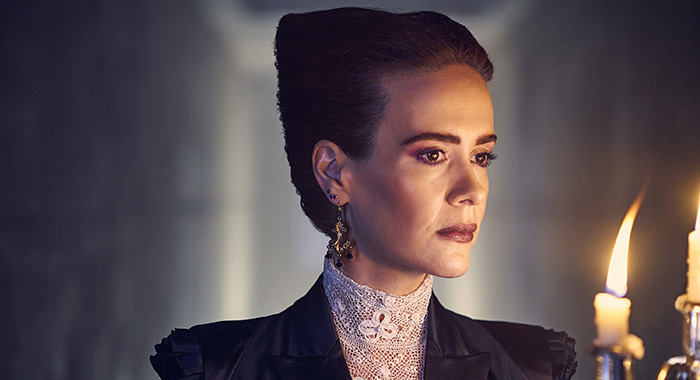 Variety said, “Paulson will not appear in a significant role” but that doesn’t rule out a cameo. Billy Eichner also said on his Twitter feed he’s not in this season, and Evan Peters told Extra he’s out too.

THE TEASERS ALL HAVE ONE THING IN COMMON

A nubile victim getting chased through the woods, a cabin in the woods, a lake, a gratuitous shower… Those all feel like Friday the 13th (with a splash of Halloween in the laundry teaser), but we’ve been through season 6, so we know teasers aren’t to be trusted. These teasers do all fall within the same genre though, where the season 6 teasers cast a wider horror net.