The Last Movie Stars director and self-described "poster boy of Gen X" looks at how his career parallels that of the married acting legends and his docuseries' subjects. 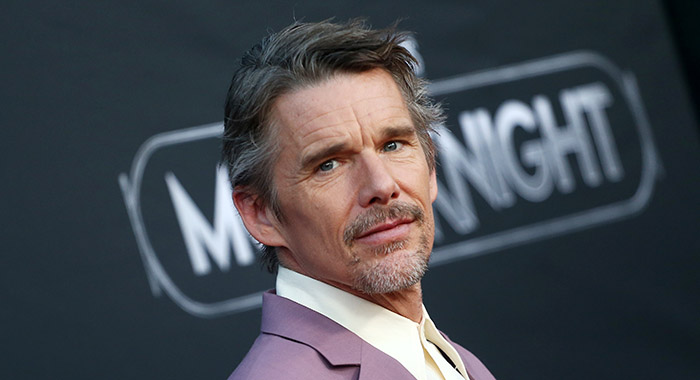 Audiences watch movies and television to be transported; to forget their own lives for an hour or so and be entertained or made curious or scared or outraged about something they see on screen.

What they perhaps don’t think about is what those cast and crew members are doing in their home lives when they’re off screen and how those long hours on set might be affecting that dynamic. What is the cost of career success? What happens when you’re married to someone just as gifted as you who wants the same thing? And what happens when you’re both public figures?

Actor-director Ethan Hawke, who has spent the better part of his own life in the public eye — sometimes unwillingly — explores all of those questions in his new HBO Max documentary miniseries The Last Movie Stars by examining the married and professional lives of two of the last century’s most iconic performers: Paul Newman and Joanne Woodward.

Using transcribed interviews with the couple and those who knew them best — and with the trust of the couple’s children — Hawke’s pandemic project maps out the Oscar winners’ career trajectories by analyzing their work, while also asking some of today’s stars to read those scripts. George Clooney, whose own career and passions aren’t dissimilar from Newman’s, reads his words; Laura Linney, who studied under Woodward, reads the words of her mentor; and Brooks Ashmanskas does an astoundingly good take on the couple’s long-time friend Gore Vidal.

Hawke’s project offers an intimate portrait of a couple who were always made out to be picture-perfect, but who were just as fallible as other humans; he was a functioning alcoholic, and she had regrets over having children because of the impact it had on her career.

Rotten Tomatoes spoke with Hawke about his thoughts on the Newman-Woodward relationship as well as parallels he sees in his own life and career. 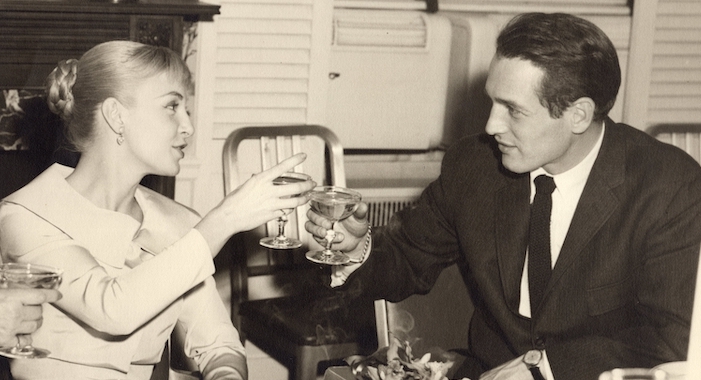 Whitney Friedlander for Rotten Tomatoes: There’s a point in this documentary series where you’re talking to your daughter (Stranger Things actress Maya Hawke), about the idea that there are three people in a relationship: you, the other person, and the relationship. You can also equate that to the notion of celebrity: There’s the person you think you are, the person the public believes you to be, and, somewhere in there, is the truth.

Ethan Hawke: I think one of the reasons why some actors are scared of genre flipping the way that I do is you’re gonna kind of ruin the audience’s impression of you. The people that are big fans of the Before movie trilogy, aren’t surprised that I might write a book, but people who are big fans of Reality Bites or Sinister or Training Day might be like, “What’s that guy doing?”

You’ve also directed scripted projects, like 2018’s Blaze or unscripted ones like 2014’s Seymour: An Introduction. They are about artists and, often, their relationship with fame. Why is that?

Hawke: I think that good filmmaking is personal. You know, when you feel like the filmmaker really wants to tell you this story for a real reason and that they’re not just trying to tap dance and entertain you. That’s the only thing I know anything about, you know? That’s been my experience.

One of my favorite filmmakers is Bob Fosse. And, if you look at his films, they’re actually all about artists. Lenny, Cabaret, Star 80, All That Jazz: They’re all about performers because that’s the world he knew about. Scorsese works on themes that are part of his psyche.

And I’m not saying I’m as good as them, but [this is] at least a valuable attempt to try to emulate. It’s a lot of work directing a movie. And if it’s not, personally, you lose your steam.

Did you look at your own career and how it reflects that of Paul Newman’s? Newman was a sex symbol and you’re like the sex symbol for Gen X …

Hawke: … I’m the poster boy of Gen X (laughs). I know that every movie I said yes to … once you’re in a position where people are offering you jobs … or even the ones that went to audition for and I got, there was always some aspect of the movie that was really personal to me.

So I watched all of Paul and Joanne’s films asking myself, Why did they do this movie? I hunted for what that scene might be. There’s usually one or two lines in the movie that there’s some part of myself I wanted to explore in this film. And you start to see like, Oh, wow, in this movie, his character’s going through a divorce. I know what he was thinking about when he played that scene. I could start to use their own work to tell their own story the way that, when I reflect on my career, I know why I did each one of those movies. It’s usually connected to something that had happened a couple years earlier in my life.

Do you think about your break-out role in the 1989 film Dead Poet’s Society and how your career would have changed had you not gotten that part?

Hawke: We all wrestle with this. What part of our life is luck? Like Paul says in the documentary, luck is an art. We all have a certain amount of luck. And what do we do with that luck? I do think about it — what would have happened to me without Dead Poets Society — and, obviously, I don’t know.  I believe that this is what I was meant to do with my life, and I was gonna find a way to do it someday. But I don’t know the answer to those questions.

A friend once told me that River Phoenix wanted the role you played in that film so much that he wrote poetry about it.

Hawke: It’s true River wanted to be in it. I was friends with him and, you know, he wanted to be in that movie so badly. And it was kind of funny because I had auditioned for Stand By Me, and I was heartbroken when he got the part. And that’s the actor’s life.

In making The Last Movie Stars, you have a couple self-referential moments. You show a clip of you appearing with Newman and Woodward’s good friend Gore Vidal in 1997’s Gattaca. And you show the scene in Reality Bites where your character, Troy, quotes the scene in Newman’s Cool Hand Luke where George Kennedy’s character says “nobody can eat 50 eggs.”

Hawke: It worked when it was funny. There’s two people that have probably said “nobody can eat 50 eggs” [in a film]. I happen to be the other one. But that shows you how much I love that movie. I can’t remember whether that was an improv or not. That’s how much that movie affected my generation.

One of the films you discuss in this docu-series is Newman’s 1963 Western Hud, where he plays a truly unlikeable character. Your 2001 cop drama Training Day is also different from a lot of roles you’ve played. Is there a point in an actor’s career where they’re “allowed” to step outside of their lane?

Hawke: The life of an actor is such that all anybody usually wants you to do is exactly what you did before. If they’re gonna pay you money to do something, they want to be sure you can do it. And that’s what’s hard for us, because if you stay in that lane, you atrophy and die like somebody stuck in formaldehyde. So we, as performers, are constantly looking for ways to use our instrument in a different way to make it more expansive.

Is that also why you look for more popcorn-type movies like 2013’s The Purge or 2021’s The Black Phone?

Hawke: I love to be in different genres of movies. There’s some actors that are extremely shamanistic and can shape-change themselves, and I’ve never been that good at it. But one of the things that can do is — I have a real love of a lot of different kinds of films. And I really admire directors who have voice in their said genre and medium. I love working with [Before Sunrise and Boyhood filmmaker] Richard Linklater and the creative space that that is. But it’s also working with somebody like [Training Day director] Antoine Fuqua, who has a totally different style, a totally different approach to storytelling.

And, if I keep putting myself in these different bands, I can make different kinds of music. And I love shaking it up with art films and popcorn movies.

When I was younger, I used to say that I wanted my obituary to list one good movie in every genre. 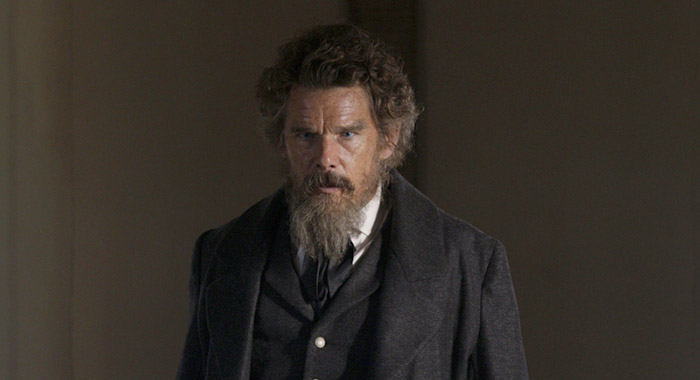 Well, then let’s talk about your Showtime miniseries The Good Lord Bird where you played abolitionist John Brown. That’s a project with a strong political and social message. Newman was an outspoken Civil Rights activist and anti-war commentator who channeled those into movies like WUSA. Is there ever a concern about doing projects that might alienate your fan base?

Hawke: I, ultimately, feel like you have to trust the audience that, if you’re turned on and curious, then good things are going to happen with you. Maybe each individual project doesn’t work. But you will continue to develop and that’s the most important thing. This documentary pushed me in ways that I didn’t expect. I directed a lot before. But, in directing a documentary, I really learned a lot about editing as far as putting in the hours editing materials. This was a huge learning experience for me and I understand the art of editing and the way you shape and move energy with cuts.

There’s a scene in Last Movie Stars where Newman looks visibly annoyed when he’s doing press for 1974’s big-budget disaster movie The Towering Inferno — although it’s unclear whether he’s annoyed with the film or simply with doing the interview. You were just in the Disney+ Marvel miniseries Moon Knight and the historical action thriller The Northman. Do actors have to do projects like these to stay in the game?

Hawke: If you want to stay in the game, yes. You’ve got to pay to play. Meaning, if you don’t make people money, you don’t get to do smaller projects. I think audiences smell it when you’re selling out you don’t believe in what you’re doing. With Moon Knight, I know why I’m there. We tried our best. If you don’t like it, it’s not because we didn’t try. I love [costar] Oscar [Isaac] and I love sci-fi. There’s a certain Philip K. Dick quality to Moon Knight that I really like.

With The Northman, it’s a weird in-between. Yeah, it’s a big movie. But that’s a flat-out art film. [Director] Robert Eggers is brilliant. And it’s a joy to be on a set with people that aspire for that level of excellence. It’s really rare to find that level of artistic integrity in the bigger [projects]. Usually, the more money, the more fear.