Set in 1890, the series features a woman looking to avenge her son's death. Plus, writer-director Blick reveals — finally — how Batman's parents died. 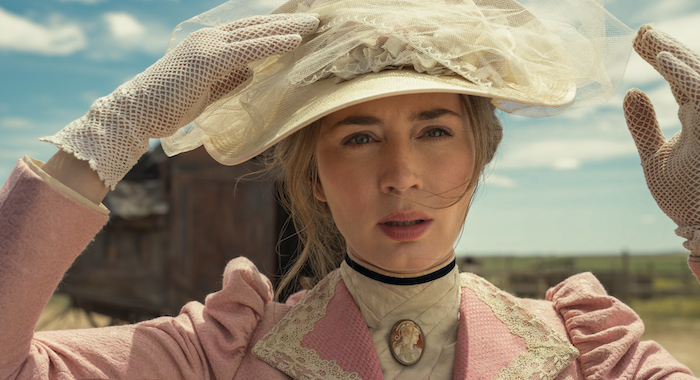 In the new Prime Video series The English, Emily Blunt plays a character who is seemingly on a suicide mission.

Created and directed by Hugo Blick, the 1890-set Western has her Lady Cornelia Locke leaving her comfortable London surroundings to head to the American West in the name of avenging her son’s death. Just as Cornelia is not prepared to give more specifics about her son’s assailant, she is also not nearly prepared enough for the world that awaits her.

“She goes into it blinded by this need for revenge and is, probably, naive about the gauntlet of what’s ahead of her,” Blunt told Rotten Tomatoes. “But, I think, she’s just propelled forward in a propulsive way toward her destination of finding this big bad wolf that she needs to kill in order to sort of reclaim who she is.”

Cornelia’s journey could have been cut a lot shorter had she not saved the life of Chaske Spencer’s Eli Whipp, an ex-cavalry scout and a member of the Pawnee Nation. Suffering his own losses and guilt, Eli returns Cornelia’s favor multiple times while she learns first-hand just how callous and unforgiving the West can be.

Blick told Rotten Tomatoes that there’s a message in his series “about the fact that you can’t outrun your past.”

“There’s external factors at play within the history of this story,” he said. “And, then sadly, there are internal factors that eat you from the inside as well as the out.”

Ahead of all six episodes premiering November 11 on the streaming service, the creator and stars of The English gave Rotten Tomatoes more specifics on their series that shows some of the worst brutality humans can inflict upon each other.

1. Colonialism Is a Factor of the Story, But This Isn’t a History Lesson 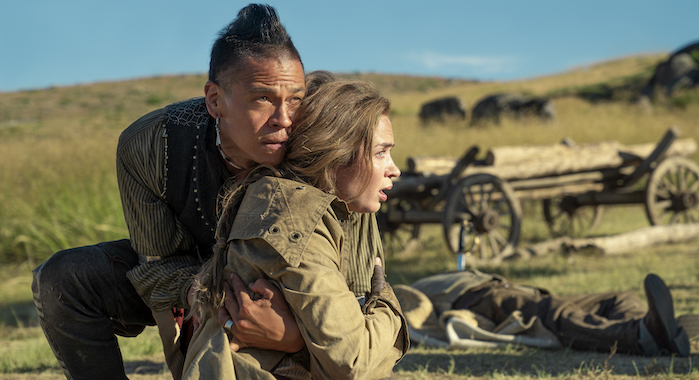 It’s hard to make a show called The English and have it be about a white British lady who travels to a foreign country without at least acknowledging the United Kingdom’s history of colonization.

Blick said he was inspired by filmmakers like mid-century Anthony Mann and George Stevens, who made what he described as “elevated and almost operatic films.” But he said that he also wanted to make sure that Spencer’s Eli “has a specific history and a specific story to tell.”

He worked with the group IllumiNative, a Native and woman-led racial and social justice organization, to ensure what he called “authenticity and sensitivity.” Fittingly, the organization’s CEO, Crystal Echo Hawk, is a member of the Pawnee Nation. She introduced him to Pawnee specialists in military history and culture who also looked at the scripts on a granular level.

“It’s not a social documentary that we’re making here,” Blick said. “But when we make the points we make about those issues, it needed to be sensitive and specific.”

2. It’s Not a Stereotypical Western 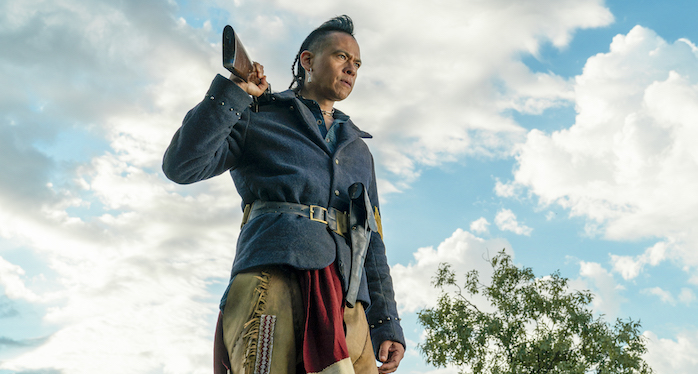 The Western genre has been around since the early days of Hollywood. But they don’t always put a spotlight on the plights of the Native experience.

Spencer, whose credits include other Native-focused stories like the short-lived ABC series Dreamkeeper and the TNT miniseries Into the West, said, “I grew up on Westerns. I love Westerns,” but what he likes about this series is that his character Eli “just happens to be a Native American.”

3. The Old West Sucked, but Some Characters Are Pragmatic About It 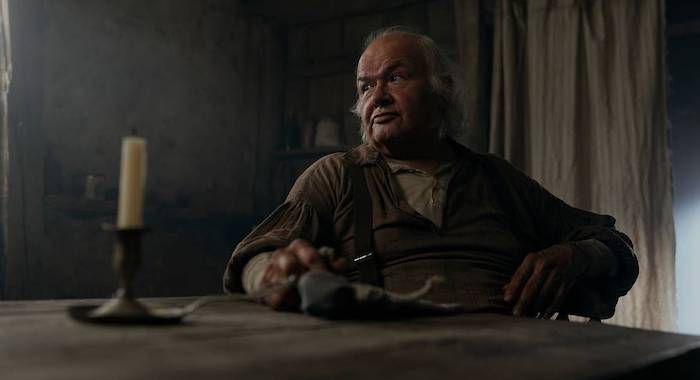 The English is full of cold-blooded characters who murder for sport as well as survival. It also has Gary Farmer and Kimberly Norris Guerrero’s John and Katie Clarke, the Monsieur and Madame Thenardier of the Wild West who are resourceful and hardened by all they’ve seen and experienced. 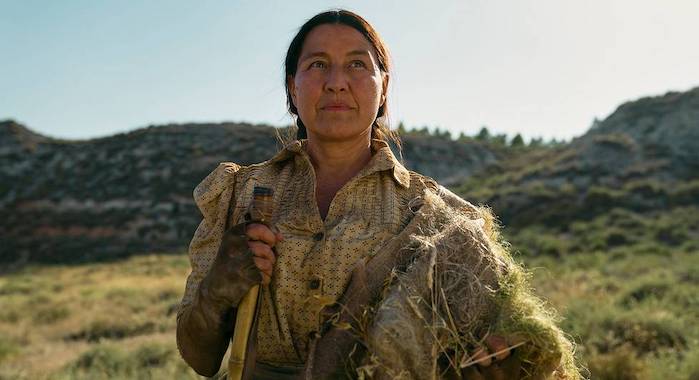 “At the center of the story is that it’s about good people who do bad things and bad people who do good things,” Blick said. “Otherwise, we kind of start to archetype motivations in a way that reduces.”

Secrets about the Clarkes are revealed throughout the series and Blick said that “in doing so, it gave their characters dexterity and stretch. And it gave our story a little bit of rhythm. You weren’t just expecting people to play archetypes. There’s other motivations in there as well.” 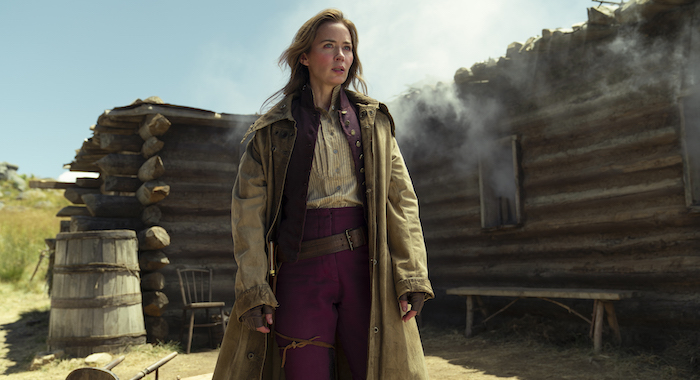 This isn’t the only one of Blick’s projects to both feature female leads who enter a “man’s” space and also have a social message. His previous credits include the SundanceTV limited series The Honourable Woman, which starred Maggie Gyllenhaal and dealt with Israel-Palestine relations, and the Michaela Coel–starring Netflix miniseries Black Earth Rising about the prosecution of international war criminals.

While Blick stressed that “there’s no medicine, sweet or otherwise” with The English, he said that leading with female characters brings a technicality to his writing and also allows for a commentary on gender dynamics.

“The technical quality is that when you have a male lead as a protagonist, it tends to have a linear direction of hit the obstacle, break the obstacle, move on to the next obstacle,” he said.

But, he elaborated, with a “central female protagonist in an otherwise quite masculine terrain, the obstacles can be addressed in an elliptical way. You can move around the obstacle in unexpected ways. You don’t have to just be the battering ram. You can actually kind of solve problems in a unique and unusual way.”

Blunt has held her own in gritty projects before, but this one also required she master a specific skill: horseback riding.

“The horseback riding, we trained for quite a while because this show requires us to be on horseback for most of it,” she said. “It was important to look at one with the horse and not like you were hanging on for dear life.”

Before he was a respected director and writer, Blick was an actor. One of his first major roles was playing the younger version of Jack Nicholson’s character in director Tim Burton’s 1989 movie, Batman. He’s most remembered for a certain scene in the movie where he asks a young Bruce Wayne, “You ever dance with the devil by the pale moonlight?,” before committing an act that has appeared in so many Batman films and series that it was parodied in an episode of the third season of HBO Max’s animated series Harley Quinn.

This means — spoiler alert — Blick can answer one the Internet’s most sarcastic questions: How did Batman’s parents die?

“I shot them,” Blick laughed.