Critics say Florence Pugh delivers an awards-worthy performance in Olivia Wilde's sophomore feature, which is immaculately shot and impeccably stylized but ultimately isn't as satisfying as it should be.

Florence Pugh could land another Oscar nomination for her performance in Don’t Worry Darling, if the movie as a whole isn’t dismissed by audiences. From its Venice Film Festival premiere, the first reviews of the twisty, feminist sci-fi drama mostly highlight Pugh as its revelatory saving grace, or close enough. This stylish sophomore directorial effort from actress-turned-filmmaker Olivia Wilde (Booksmart) is also said to look great and offer a debatably entertaining turn by pop star Harry Styles, and it will get people talking, whether the third act works or not.

Here’s what critics are saying about Don’t Worry Darling:

What can we expect from Don’t Worry Darling?

Don’t Worry Darling is one hell of an adventure… more of a horror film than the scariest ghost stories. – Lex Briscuso, Film School Rejects

A kind of candy-colored Stepford Wives in the Twilight Zone meets The Handmaid’s Tale for the age of torn-at-the-seams democracy. – Owen Gleiberman, Variety

Twilight Zone meets The Stepford Wives, with a little dash of The Matrix. – Rodrigo Perez, The Playlist

A Palm Springs-shot derivation of The Stepford Wives, or perhaps an old Douglas Sirk melodrama by way of The Truman Show. – Justin Chang, Los Angeles Times

Don’t Worry Darling wants to be a transhumanist Truman Show but ends up playing out more like a mostly okay episode of Black Mirror. – Hoai-Tran Bui, Slashfilm 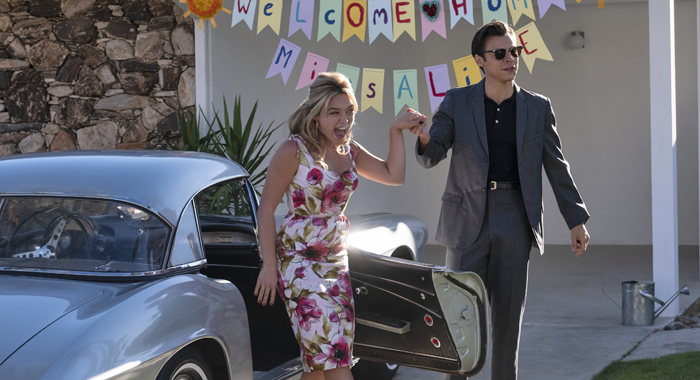 Does Florence Pugh make it worth watching?

Florence Pugh shines in a tour de force leading performance… even better than her part in Midsommar, which is saying something. – Lex Briscuso, Film School Rejects

In this she graduates to fully fledged movie star – poised, glamorous and bogglingly beautiful, yet also emotionally right beside you, and lifting every scene with sparklingly smart choices. – Robbie Collin, Daily Telegraph

With her finely calibrated mixture of ferocity and doubt, Pugh grounds the film as a woman who won’t be gaslit but may find that the alternatives are even worse. – Steve Pond, The Wrap

None of Darling works at all without such a committed performance from Pugh. She brings it her all like she’s in an old-fashioned Hitchcockian thriller. – Brian Formo, Collider

The normally excellent Pugh has not been interestingly directed, certainly not compared with her work in broadly comparable movies such as Midsommar or The Falling. – Peter Bradshaw, Guardian

But is she the only good thing in the movie?

Everything around Pugh manages to fall flat in comparison. – Hoai-Tran Bui, Slashfilm

Pugh makes a meal of Alice and, frankly, everyone else. Her many co-stars turn in serviceable performances with occasional bits of brilliance, but no one comes close to her. – Kate Erbland, IndieWire

It’s her movie, even if actor Styles gets to turn into pop star Harry Styles (a role in which he seems more comfortable) and dance on a big stage in one particularly boisterous scene. – Steve Pond, The Wrap 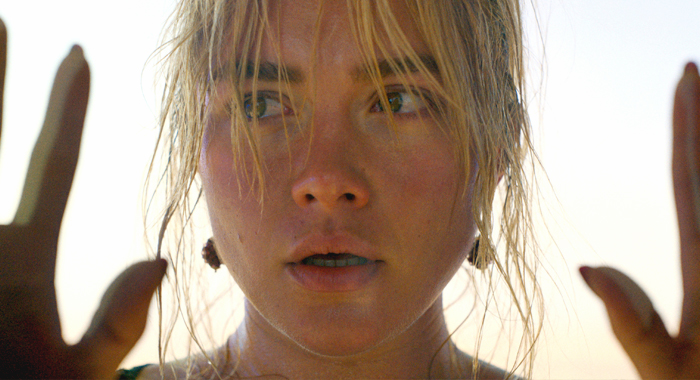 How is Harry Styles?

Styles… shows he is the real deal as an actor and has great promise. – Pete Hammond, Deadline Hollywood Daily

It is clear he’s new to the acting game, but he is far from hard to watch. – Lex Briscuso, Film School Rejects

A natural screen actor… It’s too early to tell where he’s going in movies, but if he wants to he could have a real run in them. – Owen Gleiberman, Variety

Is he just a magnetic screen presence who looks fabulous in 1950s threads, or an actor capable of depth and nuance? He’s fine in the role but based on this, the jury’s still out. – David Rooney, Hollywood Reporter

Styles may or not be a talented actor; it’s not easy to tell from this. – Peter Bradshaw, Guardian

Styles can’t help but look outclassed. But the former One Directioner is far from embarrassing. – Robbie Collin, Daily Telegraph

The weak link, unfortunately, is Styles, who is not without talent, but who fails to give Jack the dimensionality or inner conflict that the character clearly needs. – Bilge Ebiri, New York Magazine/Vulture

Styles is cute, but a dud. Everything he does on-screen practically evaporates from one scene to the next. – Stephanie Zacharek, TIME

[The film] scores points for allowing Chris Pine to show what a devilishly charismatic villain he can be. – David Rooney, Hollywood Reporter

Pine seems to have the most fun… as a silver-tongued guru whose compliments and advice are delivered as smiling threats. – Jane Crowther, Total Film 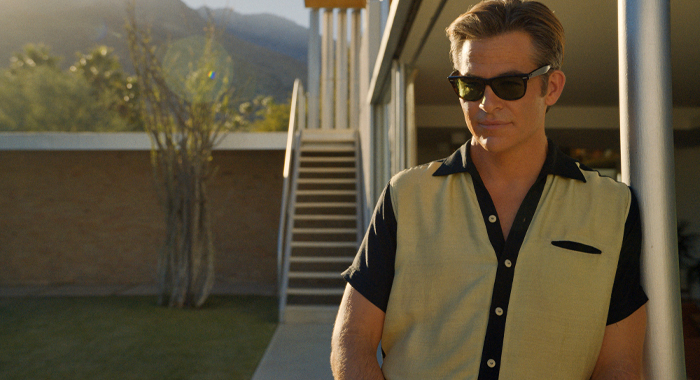 Is Olivia Wilde still a director to watch?

Like her debut, Don’t Worry Darling showcases a director with an assured hand and a commercial eye. – Jane Crowther, Total Film

Wilde proves she’s not a one-hit-wonder, at least technically and artistically. – Rodrigo Perez, The Playlist

Wilde has her moments of subtle excavation. She doesn’t bring much tonal flare, but there is a new perspective. – Luke Hicks, The Film Stage

Wilde wants to show off her directorial chops, loading up the film with visual tricks and heaps of style. – Hoai-Tran Bui, Slashfilm

Here she shows she has the chops to create a ’50s fantasia of the seemingly perfect life. – Pete Hammond, Deadline Hollywood Daily

Cinematographer Matthew Libatique’s photography throughout is terrific, modish initially and then expansive and amazing in that final act. – Rodrigo Perez, The Playlist

Just stunning to look at. Matthew Libatique’s cinematography is excellent, giving us a very sharp and striking view of the world of Victory and its colorful, stylized design. – Lex Briscuso, Film School Rejects 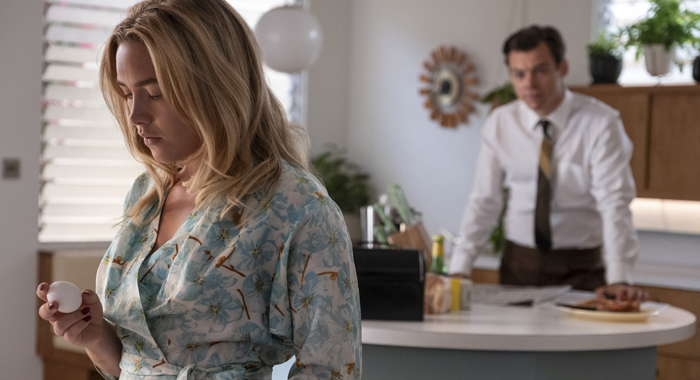 How is its soundtrack?

John Powell’s score — much of it centered on breathy, hushed and suspenseful female choral voices — is tremendous. – Rodrigo Perez, The Playlist

[It] leans too hard on a John Powell score whose moodily percussive singsong tends to overwhelm rather than deepen Alice’s mounting sense of dread. – Justin Chang, Los Angeles Times

How many more times do we need the ironic deployment of the doo-wop classic “Sh-Boom (Life Could Be a Dream)” to be convinced it can be a nightmare? – David Rooney, Hollywood Reporter

The screenplay doesn’t come together with persuasive revelations once the cracks in the utopia have been laid bare. – David Rooney, Hollywood Reporter

It’s odd to think that Katie Silberman – who wrote such vivid characters in Set It Up and Booksmart – misses the mark so badly this time around. – Hannah Strong, Little White Lies 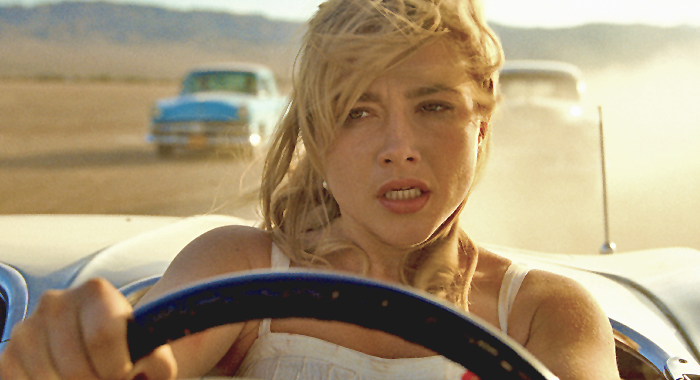 Is the movie sexy?

So damn sexy you might want to move into the mysterious Victory Project community and disregard the signs of something sinister behind all the smiling faces and perfect marriages. – David Rooney, Hollywood Reporter

The [sex scenes] sure are steamy. – Hoai-Tran Bui, Slashfilm

There’s already been plenty of online chatter about the sex scenes – with a suave, sexy Styles and Pugh convincing as the couple on a “perpetual honeymoon.” – James Mottram, South China Morning Post

Does it have a great twist?

There’s an M. Night Shyamalan-style twist that’s much better than nearly every Shyamalan twist, save perhaps the one in The Sixth Sense. – Stephanie Zacharek, TIME

The explanation weirdly winds up being one of the strengths of the film, because Wilde brings to it enough captivating grisliness that the twist effectively reframes most of what’s come before. – Bilge Ebiri, New York Magazine/Vulture

It’s provocative, to be sure, but it might have you walking out of the theater muttering, “now, wait a minute…” as you ponder inconsistencies and things that just don’t add up. – Steve Pond, The Wrap

The long-simmering reveal packs real shock value, almost enough to obscure how ludicrous it is… the sort of third-act whammy that will engender plenty of chatter. – Kate Erbland, IndieWire

The inevitable Big Reveal that occurs when Alice makes a break for it is somewhat novel, though it doesn’t really hold water. – David Rooney, Hollywood Reporter

[It’s] a disappointing reveal that ultimately doesn’t match up to its build-up. – Hoai-Tran Bui, Slashfilm

Don’t Worry Darling isn’t so much a twisty movie as it is a withholding movie. – Brian Formo, Collider 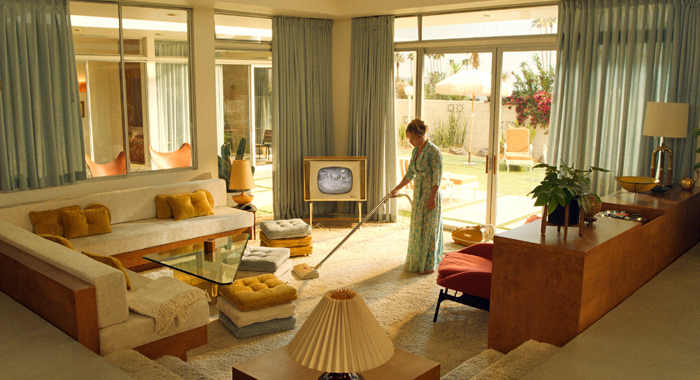 Does it stick the landing?

It’s nice to see a film deliver a message of importance while also [being] an exciting, undeniably wild ride down into the depths of deception. – Lex Briscuso, Film School Rejects

It doesn’t sting like it should in the end. – Brian Formo, Collider

The movie takes you on a ride that gets progressively less scintillating as it goes along. – Owen Gleiberman, Variety

When the curtain is finally pulled back, Wilde’s film collapses under the weight of a high-concept genre riff that the film is not strong enough to shoulder. – Rodrigo Perez, The Playlist

The tense final act goes through the motions but doesn’t deliver where it counts — with a provocative payoff. – David Rooney, Hollywood Reporter