Cassian Andor is on his way to becoming a top rebel spy in the Star Wars universe, and the latest episode of Andor offers a look at one formative experience.


Andor’s tenth episode, “One Way Out,” is something of a revelation. It culminates the prison storyline in a way that can only be described as joyous — a relative rarity within the series as its power players are actively trying to make the galaxy a darker and less joyful place in order to achieve their agendas. In the middle of the political tug of war is, of course, Cassian Andor (Diego Luna). He immediately ran and hid in the aftermath of the Aldhani operation, but he could not escape the Empire’s response. Granted, their bureaucracy is in such a state that they had no idea Cassian was in their grasp.

Spoiler alert: The following contains plot details for Andor episode 10, “One Way Out.” If you haven’t watched the episode and wish to avoid spoilers, stop reading here.

Nevertheless, the experience is a formative one for Cassian and, as Luna shared with Rotten Tomatoes when we spoke with him about the episode, the beginning of a pivot for the character as he moves inexorably closer to the sunrise depicted in Rogue One: A Star Wars Story. Beyond that, the actor also discussed how the script read, what guest star Andy Serkis brought to the story as Kino Loy, and the struggle Cassian continues to face despite his awakening in the last few episodes. 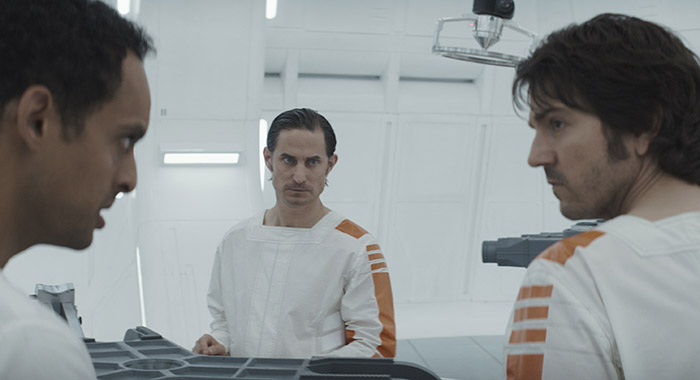 Erik Amaya for Rotten Tomatoes: Episode 10 was just phenomenal. Did it read that way in the script, or did it start to feel that way when you’re actually there on set dramatizing a prison break?

Diego Luna: Definitely on the page you could tell, s—; this point is really important. But also, I had the same feeling reading [episodes 3 and 6]. I think those, because it’s the big move and it’s the closing of something. It’s the learning [moment] and the meeting or the goodbye with the character. 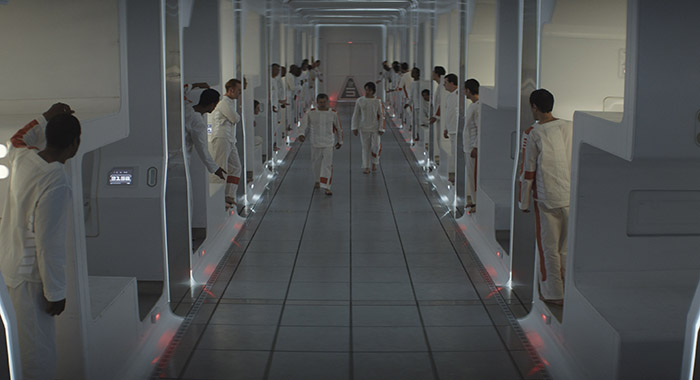 The prison truly reveals something to him?

Luna: I believe that everything about that prison makes you understand the complexity and the size of the Empire. It’s this idea of the best prison is where you [the prisoner] are the most productive, and the less of a unique individual. [Outside, it’s] this thing that they can’t ever take away from you, that you are unique, that you are specific, that you are who you are. Well, over in the prison, you are just a number. You’re just another white suit building something that is worth a lot and means a lot, but not to you, and you’ll never get to experience [that meaning].

For me on the page it was like, this is the moment. The end of [episode] 10 is the moment when he does that jump. He’s never going to be afraid of jumping anywhere ever again. 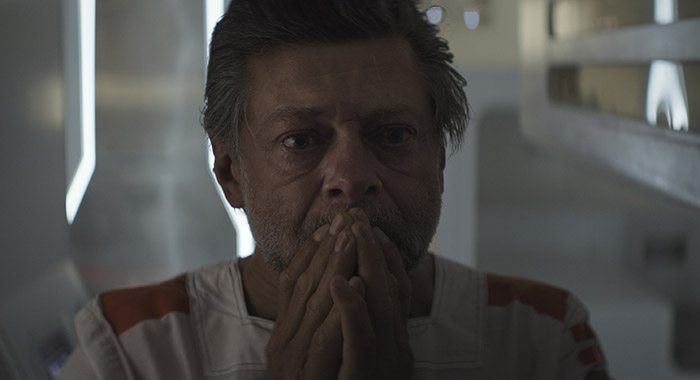 And shooting the episode?

Luna: I can do all the work I have to do to understand who my character is and make the choices I have to make. I can analyze the pages, but something happens when you get on set and you find an actor in front of you portraying a character that is supposed to mean something to you. So much of this story is about who he meets on that journey that gets him to the place where he is willing to sacrifice everything. That can be on the page, but there’s a piece of it that doesn’t come until someone portrays that role.

I didn’t know until I met Andy Serkis how important it was going to be for Cassian to see the possibility of transforming, to see someone waking up [after they] created so many barriers as Kino had. If you can go through that and touch what’s there, if you scratch and find the real person there, he can turn and become as committed as needed in order to bring change. Seeing that capacity we all have portrayed by this man, that’s the example Cassian witnesses there. He finds a way. That’s a moment where he thinks, There might be something in me that can make me trigger things and [turning] someone that was so against me and what I wanted to do and what I wanted to put together here with this bunch of people.

That is something Cassian learns of himself in that prison that I think helps him think big, think he could put together a team. He can do what then we see him do in Rogue One at the end where he puts together a team to support the decision Jyn Erso [(Felicity Jones)] made. 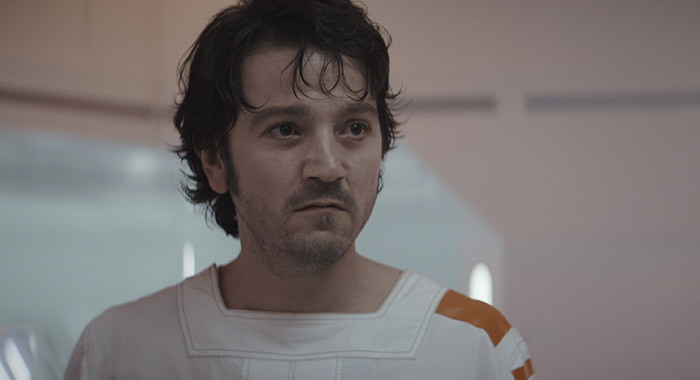 Although we know he will ultimately stand his ground, this slightly younger Cassian has a tendency to run from things. So it’s interesting to see him running again, but just by the necessity of the situation, it is a victory. Is this the beginning of him running toward something as opposed to running away?

Luna: Definitely. Yeah, and also, it’s different. You have to remember he is a spy at the end. He confronts in a different way, and [in that mode] you learn not be around when you’re not needed, and learn from what you see and move on. It’s a different mentality. In a rebellion, you need the frontal soldiers, definitely, but you also need [someone like Cassian] being a spy. It’s a different thing, and you can tell by looking at Luthen Rael [Stellan Skarsgård]. The first thing Luthen says is, “I came for you. Now we have to run. I got what I needed from here. It’s not about us showing them how it’s done. It’s about us disappearing from the breach. Let’s get out of here.” That’s how everything starts, and he’s learning from the best. 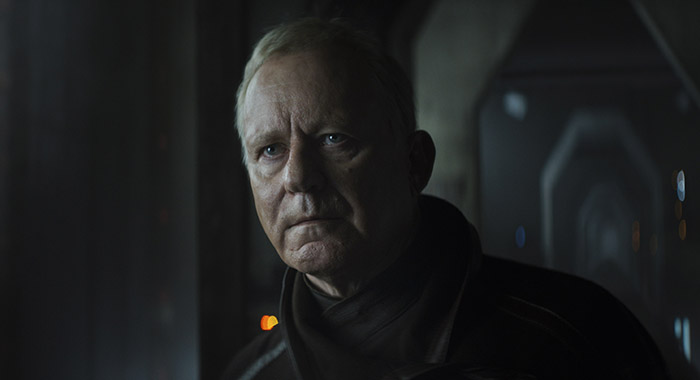 Luthen has that amazing scene in this episode in which he says, “I burned my life to make a sunrise I’ll never see.” It feels so resonant considering where Cassian ends up. Is he at a place where he can contemplate burning himself for something, or is there still a ways to go for that?

When we find Cassian [as a child], he already comes from losing everything. When you see a community of young people in the middle of the jungle, you go, “Well, there’s loss involved, definitely, here. They’re starting from scratch. What is this?” Then you see that everything is taken away from him again and he rebuilds his life. We find him on Ferrix with a mother that chose him and the absence of the father that chose him.

So, he’s a guy that’s perpetually been forced to let everything go. And here he is again being asked to do that, but now for a reason. Now consciously, now not to escape, not to hide, but to confront. But again, it’s a struggle for someone that actually, finally, builds relationships, has a mother, has a beautiful, fun and lovable droid that is with him and follows him everywhere; has friends that lend him stuff, that still believe in him even though he owes everyone something. That’s why I think that prison is so, so crucial. He ends up in prison just because he was in the wrong place at the wrong moment, not even because of what he has done. No one knows who he is. No one cares. 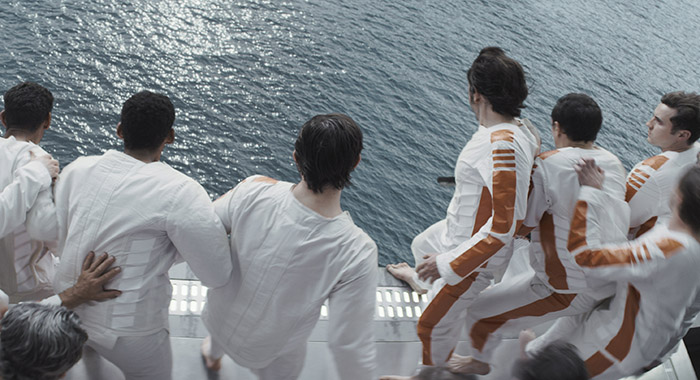 Is he aware that the Aldhani operation allowed the Empire to extend the prison system, extend sentences, and create the perpetual workhouses?

Luna: Definitely. He realizes he’s been participating in something without actually choosing that is changing the game. Maarva [(Fiona Shaw)] says that. It doesn’t even have to get to as far as the prison. When he comes back, Maarva says, “What happened on Aldhani has changed my perspective on what am I going to do with my years to come. Whatever I have left of life, I’m going to fight and dedicate it and remind these people that change is possible and change will come.” The beauty is that after the prison, that changes [for Cassian, too.] 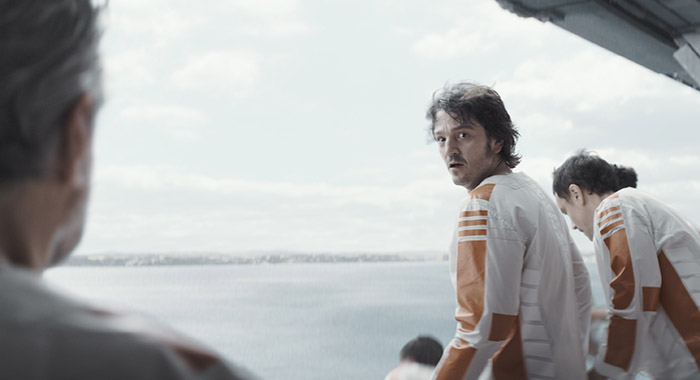 Before, decisions were made in terms of surviving or moving out of the way when things are going to get bad — or being in one place where he thought he was doing one thing and it ended up meaning something else. This season is also about growing up. It’s like designing your future. You have to build what’s there for you. You have to choose. It’s about choosing. It’s about having the freedom of choosing, of making a choice, and not being just forced, and that just comes with the consciousness of what you are capable of. I think that doesn’t come [for Cassian] until the prison.