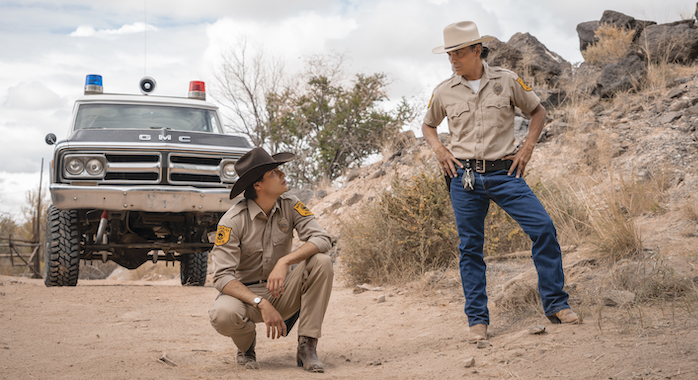 The idea of a small-town cop who knows everyone teaming with some big-shot outsider to solve a crime in their community is such a trope of prestige drama that it’s warranted a Saturday Night Live sketch. Most of those stories involve white people living in blue-collar communities, hit upon some hot-button issue like addiction, and portray a particularly heinous murder.

The new drama Dark Winds eye-rolls that the concept is neither new nor exclusive to stories about white law enforcement officers.

The AMC and AMC+ series is based on a story from author Tony Hillerman’s Leaphorn and Chee book series about Navajo police officers: Zahn McClarnon’s seasoned and world-weary Joe Leaphorn and Kiowa Gordon’s highly educated Jim Chee, who has his own secrets. The series also stars Jessica Matten as officer Bernadette Manuelito, Rainn Wilson as a used car salesman and missionary, and Noah Emmerich as a has-been FBI agent.

Set in 1971, Dark Winds is both a crime drama involving an elaborate heist and a missing helicopter and a psychological thriller that brings in elements of Navajo mysticism, while also hitting on political and social issues that have long plagued Indigenous people.

Creator Graham Roland, who adapted the book for TV, told Rotten Tomatoes that from the first meeting he had with executive producers — including series director Chris Eyre, Robert Redford, and George R.R. Martin — he was given free rein to put his own take on the story as long as he didn’t change the time frame. 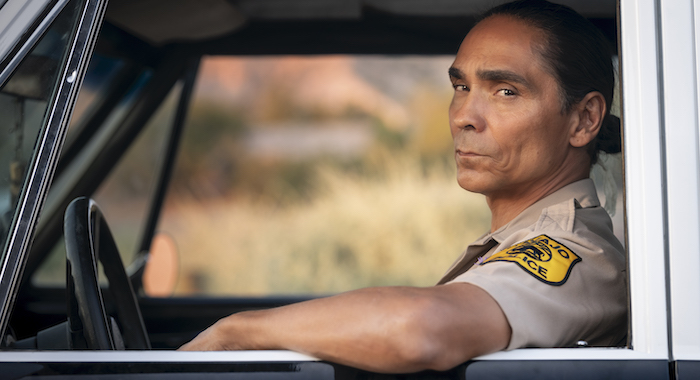 One reason, Roland explained, is because setting it at a time when “forensics was very primitive” meant that “these cops really have to solve this these crimes using their knowledge of the land you, using their knowledge of the community and using their own wits.” The other, he said, is because he could talk about a part of American history that many today either don’t know about or would like to forget, such as the sterilization of Native women or the often Christian-run boarding schools Native youth were sent to as a way of “civilizing” them.

Eyer directed four of this series’ six episodes and previously helmed the PBS TV movie adaptations of Hillerman’s A Thief of Time and Skinwalkers, both of which Redford also produced.

He said that even though Hillerman, who died in 2008, was not Native himself — he grew up in Oklahoma among members of the Potawatomi — he “wrote incredible books of Navajo culture, although he wasn’t Navajo.”

“It takes those bridges in order for all of us to come together,” Eyre said. “I don’t know that we can tell the Native American story without the American story and vice versa.” 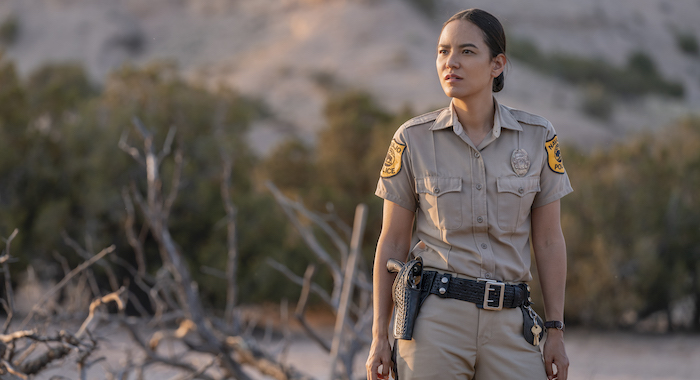 There is at least one change that was made in this book adaptation: Matten’s character, Bernadette, played only a small part in the books until Hillerman’s daughter, Anne Hillerman, took over that series after her father’s passing. On screen in this series, Bernadette now more resembles Dexter’s Deb Morgan — a dedicated cop who struggles to be taken seriously by some. She also comes with her own complicated backstory.

“It’s a beautiful trio now,” she said. “It’s 100-percent the Jim and Chee story. But, also, I love that AMC and our producers and creators and writers have really given the female character some presence as well.”

She adds that, on a more personal level, “it’s a dream because I always wanted to explore playing a contemporary Native character in the ’70s.”

As inclusive as Dark Winds is when it comes to staffing both Native and non-Native cast and crew, there is a risk that it may cause some debate similar to the ones brewing about whether non-Jewish actors can play Jewish characters or if actors who don’t identify as queer can play queer characters; while Navajo actors do appear in the show, the three leads are not from that tribe. Matten is Red River Metis-Cree, McClarnon is Hunkpapa Lakota, and Gordon is Hualapai.

“Each tribe has their own traditions and their own culture and ceremonies and the way they speak,” McClarnon said. “And so it’s always a challenge — but a fun challenge — to try to portray a different tribe than I am.” 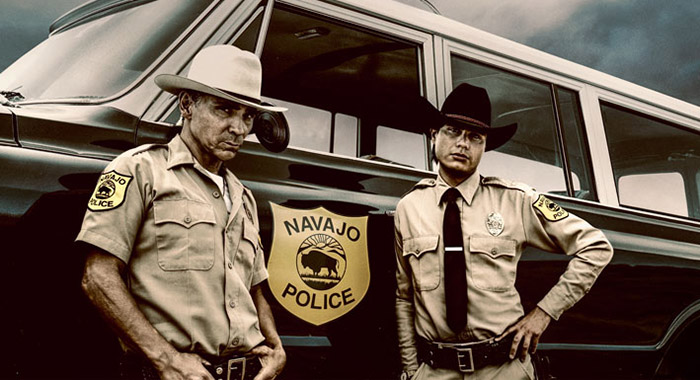 Gordon, who grew up around the Grand Canyon, said he leaned heavily on his dad for pointers since he both grew up in the ’70s and learned the Navajo language when he was on his Mormon mission trip. There were also advisors on set to help with accuracy and the show makes a point of highlighting specific details about the community, such as a Kinaaldá — the ceremony celebrating a girl’s maturity.

Eyre is more pragmatic, saying “It’s art and it’s entertainment. I always joke around with my friend, [actor and producer] Wes Studi, that if he was only allowed to play a Cherokee Indian, where would that leave us?”

“These are performers that can play non-Native roles,” he said of his actors. “And it’s just a matter of they were the very best for the part and we were excited with what they’ve delivered. I think you can see it’s rich with dimension and human interaction.”

Native actors also must contend with the limitations of what kinds of stories are being told that feature Native characters. McClarnon, for instance, also currently plays a tribal cop on the Hulu comedy Reservation Dogs and previously played one on the A&E Western Longmire. He admitted he was worried at first about playing two tribal officers — albeit with two very opposite skill sets — at the same time because audiences might have trouble “differentiating the two.” Now that he’s worked out the roles, he’s more confident that this won’t be a problem.

Perhaps the problem of limited roles won’t be an issue for long, given the copious amount of stories available in Hillerman’s 18 books in the series. Could AMC franchise this show the way it has with its hits The Walking Dead or Breaking Bad?

Roland said they’re too busy plotting out a potential second season of Dark Winds to worry about that now, while Eyre laughed that a spin-off could be called Better Call Bernadette.