The Stephen King–George A. Romero ’80s classic is back as an anthology series helmed by The Walking Dead boss Greg Nicotero. Rotten Tomatoes visited the show's Atlanta set.

With the success of series like The Terror, The Haunting of Hill House, and American Horror Story, television has never been a better medium for creators interested in telling spooky stories on a regular basis. The latest entry into the genre is Creepshow, a TV anthology version of the Stephen King/George A. Romero horror film that debuts today on genre-focused streaming service Shudder.

Spearheaded by The Walking Dead boss Greg Nicotero, the series pays tribute to its roots by telling frightening stories of many ilks (gory, suspenseful, silly, unsettling). The first episode features the installments “Gray Matter,” based on the King story of the same name about an alcoholic whose booze of choice might affect him in more nefarious ways, and “The House of the Head,” about a girl who discovers a killer severed head in her dollhouse.

Earlier this year, Rotten Tomatoes visited the series’ Atlanta set, where we walked through blood-soaked sets, saw creatures being made, and saw a werewolf decapitate a Nazi. Here are six things we learned about the show while we were there. 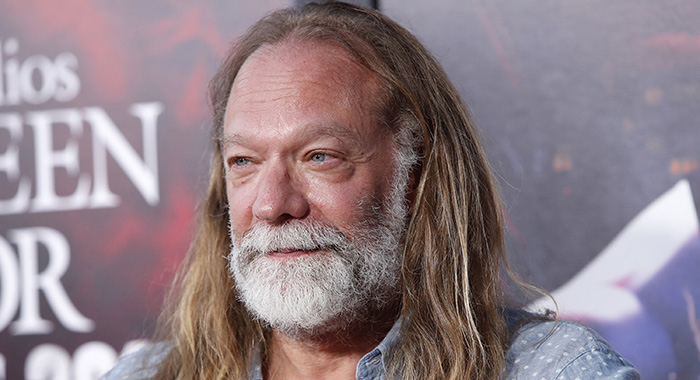 The Walking Dead boss is a lifelong horror fan who got his start working on special effects makeup with Romero and Creepshow’s effects mastermind Tom Savini on Romero’s Day of the Dead.

With this Creepshow reboot, “I want to embrace the spirit of the original movie,” Nicotero said from his windowless office in an Atlanta production facility. “I’m not rebooting anything. It’s not like, ‘Oh we’re going to upgrade it and retell it.’ It’s really like you’re picking up another issue of Creepshow, and these are the stories.”

The stories include works from King, one from King’s son, Joe Hill, plus more adaptations of existing stories and a few original tales. Nicotero was so dedicated to the project that he began working on it during The Walking Dead, taking just a week off before flying back to Atlanta to begin pre-production on Creepshow.

2. The series was filmed in an uber-short time frame 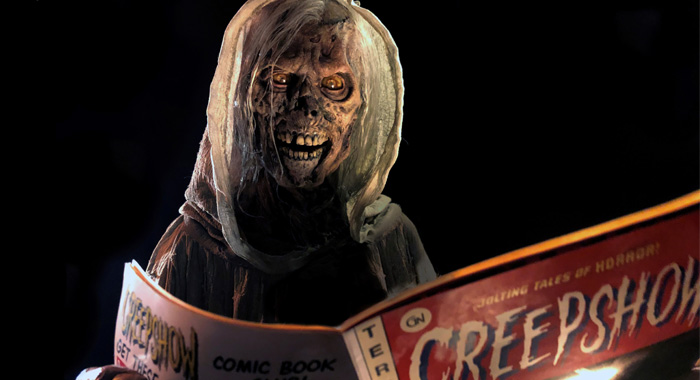 Each of the six episodes contains two stories, and each story has just three and a half days to film.

“You can’t stop filming for 12 hours. You can’t eat, you can’t go to the bathroom, and you’ve just got to keep filming and go crazy,” Nicotero said in a short break while filming the final two installments.

On one stage, special effects experts prepared a dummy for its impending decapitation — the fake blood spurting everywhere meant they had just one take (or risk spending hours cleaning up the blood only to set it all up again. On the other, the production team used a forklift to place a massive monster they created on the set of the story they’d begin filming the next day.

Originally, Nicotero wanted to film even more stories, but with a packed production schedule spanning from the beginning of January through the end of March, it wasn’t enough time to fully realize that many tales.

“I was pretty greedy at first. I was like, ‘We should do three stories per episode, and each story should be like 17 minutes,’ and then we got into production and I was like, ‘What the f— was I thinking? We should do two,’” he admitted.

3. For practical effects, Nicotero brought in the experts. 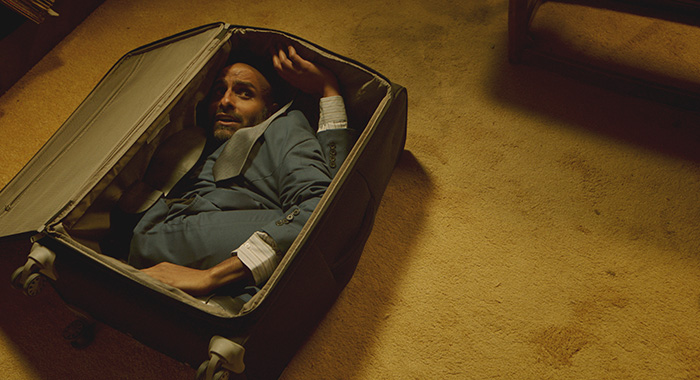 Special effects guru Savini worked closely with Romero on many of his films, including the original Creepshow. So it was only natural Nicotero would hire him to helm a story of his own (Joe Hill’s “By the Silver Water of Lake Champlain”).

“It’s 98 percent practical effects — all the creature work, all the makeup, the werewolves, the puppets,” Nicotero said.

Evidence of that mandate is strewn about the production spaces that once held Gabrielle Union’s BET drama Being Mary Jane — cardboard boxes loaded with fake animal carcasses are piled next to busts of various creatures. (And sets from stories filmed weeks prior sit abandoned, covered in fake blood and gore — evidence of the sheer speed of production.)

“We’re shooting so fast that when one of them is done, the guys just throw it on the floor in the room and grab the next one and run to set. So when you walk by our lock-up, everything is just thrown everywhere. There’s no time to even pick anything up,” Nicotero said. “The skin crawlers, the big bloody monster, they’re all on the ground. We finish shooting and it was soaked in blood and they just dropped it and it’s still sitting there, because you don’t even have five minutes to wipe the blood off. We’re moving that fast.”

4. He hired big names to star. 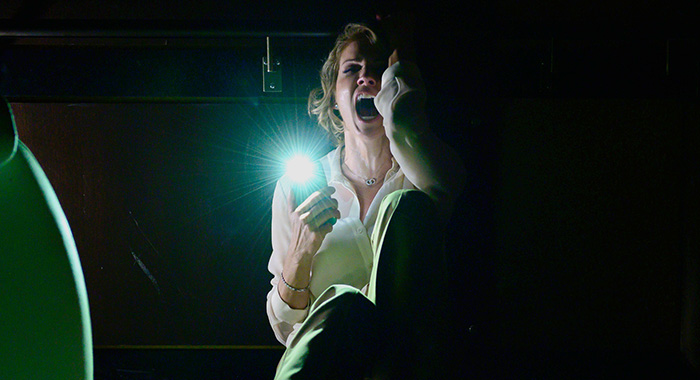 How did the little horror series for a streaming service wind up with genre heavyweights like Tricia Helfer, Adrienne Barbeau, Jeffrey Combs, and Bruce Davidson, plus other stars including Giancarlo Esposito, David Arquette, Kid Cudi, and Big Boi (yeah, Outkast’s Big Boi)?

“I literally texted every single actor I’ve ever worked with to find out what they were up to and I was like, ‘Come on, let’s play, it’ll be fun,’” Nicotero said. One thing he could promise his pals: It’s quick. You come in, you shoot a couple of days, and you leave. So in that regard it’s been fun, but it’s also been insanely hard.”

5. The scary stories include adaptations and originals. 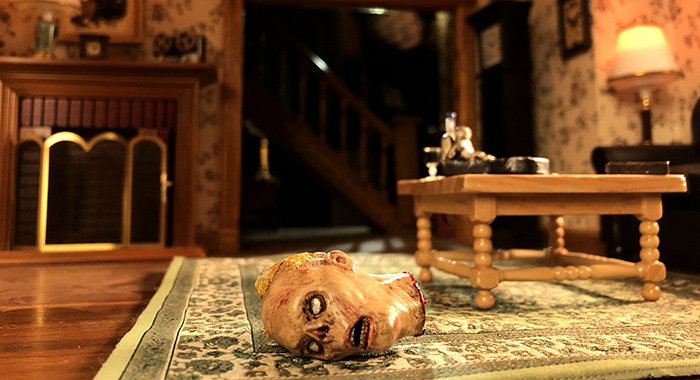 Adaptations include Stephen King’s “Gray Matter” (which kicks off the series), Joe Hill’s “By the Silver Water of Lake Champlain,” Joe R. Lansdale’s “The Companion,” Josh Malerman’s “The House of the Head,” Christopher Buehlman’s “The Man in the Suitcase,” Bruce Jones’ “All Hallows Eve,” and John Skipp and Dori Miller’s “Times Is Tough in Musky Holler.”

The original stories include “Lydia Layne’s Better Half” by John Harrison and Nicotero, “Skincrawlers” by Paul Dini and Stephen Langford, “Night of the Paw” by John Esposito, and “Bad Wolf Down” by Rob Schrab.

Again, Nicotero hit up his friends to obtain the season’s best-known story: “I actually wrote Stephen King and said, ‘Can’t be Creepshow without a Stephen King story. What do you think?’ And he’s like, ‘I have just the story!’ Within 20 minutes, Stephen had two different stories that he had proposed,” Nicotero said, and once production began, it was clear “Gray Matter” was the right choice. “It was just cool that he said, ‘Yeah man, sure.’” 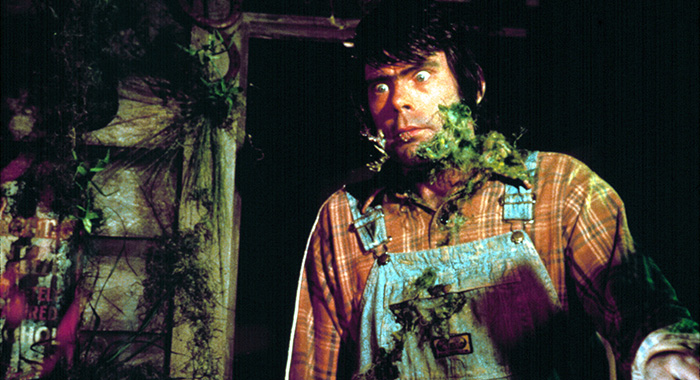 While filmmaking techniques have advanced in the more than 35 years since the original, which was originally designed to pay tribute to mid-century horror comics, this Creepshow retains much of its look. That means intros and outros that use the familiar comic book motif.

“Because of the comic book vibe with all the panels, I think Creepshow is a different experience. We are really embracing the split-screens and going through the panels. So it’s got that flair and flavor to it, which is great,” Nicotero said.

And the crew — from prop makers to set decorators — are also reverent horror fans, and have filled the series with plenty of Easter Eggs. Gray Matter has “probably 30” nods to King’s work. An ash tray from the original film owned by one of Nicotero’s friends appears in every episode.

“I want people to look and then they’ll watch it a couple more times,” he said of “Gray Matter.” “There’s a lot of little things. Comic books, the voodoo doll – I forget half of them because we’ve been shooting for seven weeks. I’ll probably go back and go, ‘Oh s—, I forgot about that one!’ But it’s been fun because even the art department guys come and go, ‘Look, we made this!’ and I’m like ‘That’s great, I didn’t think about that!’ Even ‘The House of the Head,’ … it’s a really great psychological thriller about a little girl who comes home and her dollhouse is haunted. She goes to the store and she’s like, ‘I need help,’ and she goes to the store and gets a cop and puts the cop toy in and then the cop gets killed and she goes and gets an Indian. We did a little Chief Woodenhead from Creepshow 2 as the Indian. All that nerdy s— where we’re doing it and I’m like, ‘No one’s ever going to notice this,’ and on set, half the crew is like, ‘Is that Chief Woodenhead?!’ I’m like, ‘How the f— do you guys know that? This is great.’ So there’s a lot of that kind of stuff, and it’s been fun.”