In another world, similar to ours, the new Starz series Counterpart does not exist. The reason: Justin Marks did not try to beat a streetlight a few years back.

The Jungle Book screenwriter had a dentist appointment, but parked in a structure that was a half-mile from the dentist’s office.

Inside the car was La La Land producer Jordan Horowitz. The pair grew up together and were even both in the same band back in the day. But as college loomed, they lost touch. Marks eventually moved to Los Angeles to begin a screenwriting career, while Horowitz entered the New York independent film scene.

“He gave me a ride to the dentist office that then reconnected us,” Marks said.

Had either man not tried to beat the light, they would have missed each other, and Counterpart, which debuts with a special preview of the pilot episode this weekend, might not exist.

Academy Award winner J.K. Simmons (Whiplash) stars as Howard Silk, a low-level agent at a strange government agency in Berlin who discovers his world is connected to a divergent reality — a world like Howard’s own, but built on billions of subtle differences, the accumulation of alternative choices. That world, dubbed “The Other Side” by Marks and Horowitz, offers characters like Howard and his wife Emily (Olivia Williams) the unique opportunity to learn what might have happened had they turned right instead of left. It also presents something Simmons calls “a great ethical and moral dilemma” as Howard and other characters face the temptation to discover what their lives could have been like if things had been different.

“[It’s] like a time-travel scenario,” Simmons added. “I mean, you can’t go back and fix it, but maybe you can go over where it’s already been fixed.”

The actor recalled a seemingly insignificant choice in his own life that might have led to a very different life: a summer in college when he chose to try theater instead of painting houses. Simmons theorized he might still be painting houses if not for that choice, but was unsure if he wanted to really know what that life would be like.

Howard, meanwhile, confronts what changed circumstances would mean for himself when he meets the Howard Silk of the divergent reality. 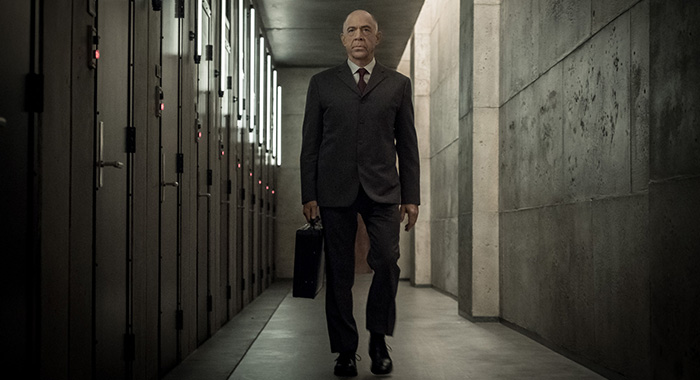 While the series’ premise had an immediate “What if?” sci-fi hook to it, Simmons first found himself taken with the character of Howard, a timid man hoping for a promotion when viewers meet him.

“It was just good writing and a character that I felt like I could really identify with,” he said. “A lot of scripts I was getting in the wake of Whiplash were these abusive alpha males. And when I first started reading Howard, the first Howard we meet, he was definitely a departure from that. [It was] just something that was intelligent and looked like fun.”

Then he discovered the other Howard – referred to as “Howard Prime” in the script – and found a second character to identify with, though he admitted, “I still sort of viewed the world from our first Howard’s point of view, and really, I think, continued to throughout a lot of the shooting.” 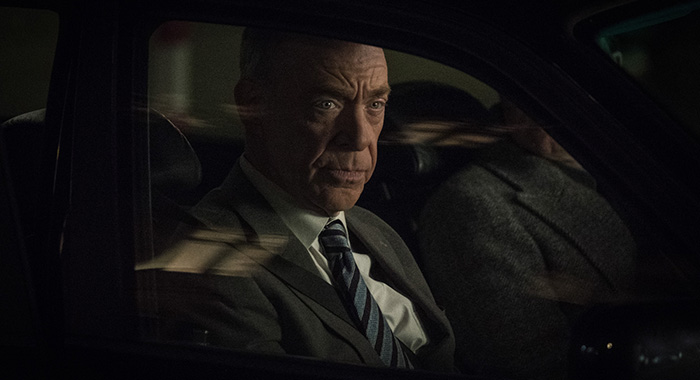 The first Howard, ostensibly from the world closest to our own, spends his days before the series begins collecting information from the Other Side through a very elaborate system of codes and passwords. It is a low-level job requiring he only write down the coded phrases.

Howard Prime, meanwhile, is more of a traditional Cold War spy character. He is accustomed to wetwork and the higher levels of the agency’s equivalent in the other reality. And according to Simmons, it may not be entirely clear who the hero of the series really is.

“I’m interested to see [how] audiences respond to it,” he said, “and who’s the protagonist [in their view], because there’s a lot of answers to that question. There are a lot of possible answers.” 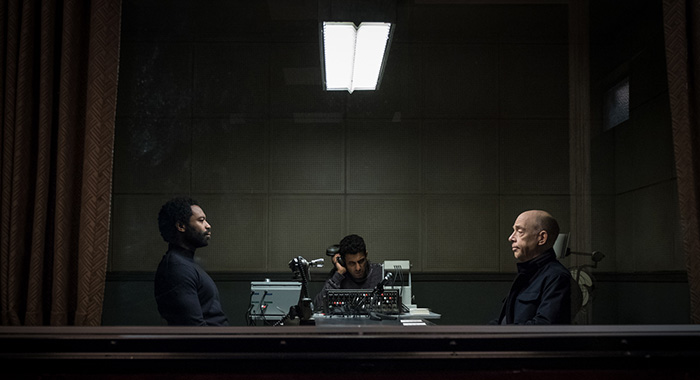 That ambiguity and level of Cold War–era suspicion was a key element in developing the series.

“When we first started talking about it, we were talking about the classic Cold War spy thriller tradition and also a little bit of science fiction too,” Horowitz explained.

He used the example of John Le Carré novels like The Spy Who Came In From The Cold, which are filled with that political tension, but allow the characters to remain at the forefront.

The result, combined with the divergent reality is something Horowitz called a “very character-forward science fiction thing that sort of lived in that spy thriller genre.”

Marks added that the premise began as a spy thriller with the science fiction element “sprinkled over the top.”

“Sci-fi could be anything and so what we’re doing with sci-fi here is we’re taking the elements of a parallel world and sprinkling it over all of the conventions that you would find in a traditional Cold War espionage thriller,” he explained. “But you know you could be telling a time-travel sci-fi story, you could be telling a futurist sci-fi story, a parallel-world sci-fi story. All of those have different conventions in and of themselves, so we felt our strongest foot was to be landing firmly in the place of espionage and then adding the science fiction over the top of it.” 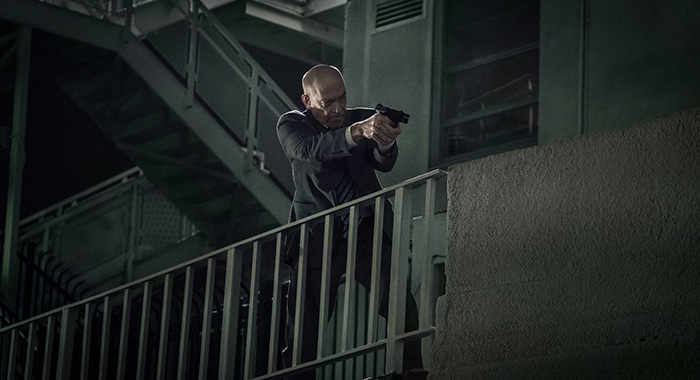 For Simmons, becoming a spy hero – at least when he is playing Howard Prime – was a special opportunity to “go back to being a little nine year old and you get to do a baseball movie or a cowboy movie, or you get to be the super spy shooting guns at the bad guy.” He definitely enjoyed playing what he called “that guy who actually is competent in that scenario and knows how to handle himself,” but also enjoyed playing Howard for the opposite reasons.

Then there came the day when Howard and Howard Prime interacted with one another.

“We experimented with a few different ways of how to technically accomplish it, some of which involved having a recording in your ear of your own dialogue from a previous take, and looking at a blank spot and pretending that you’re looking at yourself, or looking at a tennis ball on a stand,” Simmons recalled.

Ultimately, the method which worked best was for Simmons to play the scenes opposite his stand-in, John Funk.

“We were able to just make it very organic like a usual day on a film set,” he said.

While it took a little time to get the technique worked out, it eventually meant scenes could be blocked and performed quickly. Then, as Simmons put it, “the technical wizards” merged his two performances into one take. 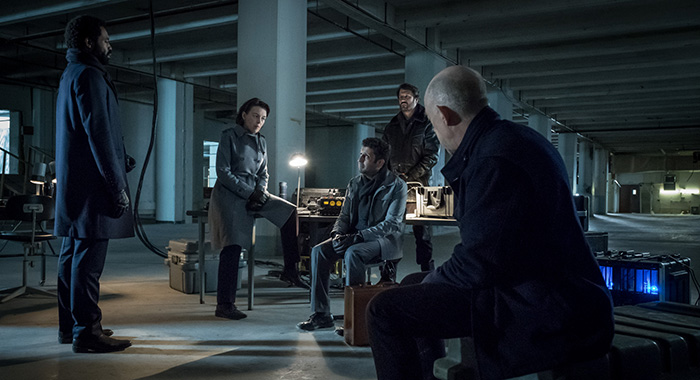 Another technical consideration for the producers was the look of the Other Side. After toying with concepts like tinting the footage, switching to black and white or using title cards, they realized the best answer was not an “underlying aesthetic” for the Other Side at all.

Instead, they tried to “let the aesthetics serve as a different underlying narrative between the two worlds,” as Marks put it. The result became the presence of subtle differences in a visually similar setting; the Other Side uses more LED lighting, for example. But as the series continues, the accumulation of differences will create a visual grammar that will allow the viewer to know which world they are in almost imperceptibly, according to Marks and Horowitz.

But in making the choice to let the Other Side’s visual aesthetic grow from the narrative, Marks, Horowitz and the rest of the writers’ room went down a “rabbit hole” of “game theory” about various aspects of the Other Side.

“The Other Side has a very meticulously built out narrative that’s only being alluded to,” he added. “You get the sense that there’s some resentment built up between the sides.” 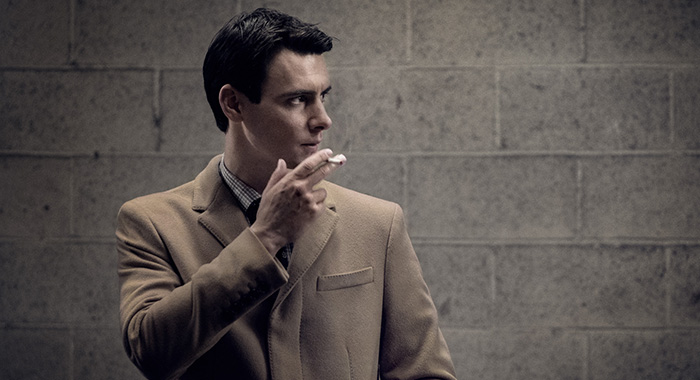 The suppositions led to a compelling backdrop for characters like Howard, Howard Prime and his contact on our side, Peter Quayle, played by Game of Thrones’ dastardly Brother of Dragons actor Harry Loyd.

“Quayle is in his own black comedy,” Marks said. “And Harry plays it so brilliantly. There’s a dark satire to what it is because I think that there’s a manifestation in Quayle of a certain version of privilege.”

While the nature of his predicament will be revealed in subsequent episodes, Howard Prime pretty much has his number from their first scene together.

Marks also added, “It’s less about like it is with [Howard], where it’s a man that’s lived with mileage and gone a different path. I think in the case of Peter Quayle, it’s a lot more about his inability to cope with the very, very dangerous high-stake situation he’s been thrust into the middle of, unwillingly.”

It all leads to a character who is “trying to write himself out of the show in every single scene.” 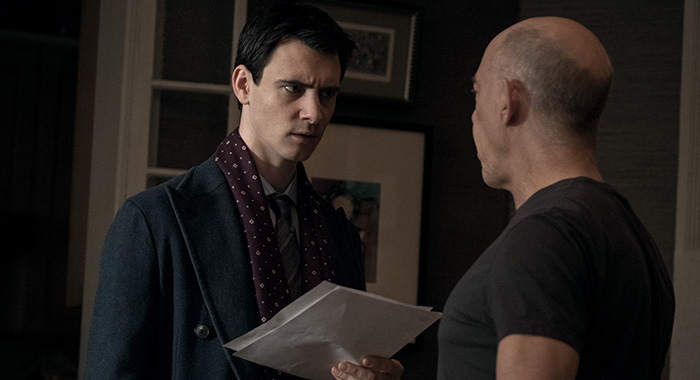 Writing Quail gave Marks and Horowitz a particular pleasure, but Simmons added that working on Counterpart day-to-day was also a pleasure.

“I’m sure it will continue to be,” he added. “And it ain’t going to get boring. It’s going to continue to present good challenges and hopefully boggle minds.”

Considering the alternatives, Marks said he would not be a very different person in that world where Counterpart never came to be, but noted that “over time, things start to impact your sense of identity as formed in a certain way by constructs around you.

“Power over that and the powerlessness that we all possess in the face of that,” he said, is key to the questions the series poses.

Counterpart episode 1 airs as a sneak peek on Sunday, December 10 at 9 p.m. ET/PT on Starz after the season 3 finale of Outlander; the series officially premieres January 21, 2018.