The actor talks going deep to build up his characters (he's got the notebooks!), why he relished playing a villainous pimp in Zola, and his part in the bold new horror film you "won't be able to get out of your mind." 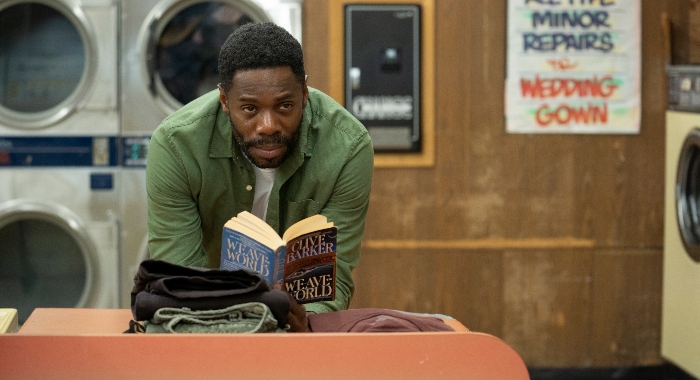 For anyone glued to prestige TV and acclaimed indie and Oscar-hopeful cinema in the last few years, it would seem that Philly-born Colman Domingo has been everywhere. There he was as a thoughtful father in Barry Jenkins’ If Beale Street Could Talk and as the even-keeled bandleader in Ma Rainey’s Black Bottom; there he was, too, dodging Walkers in Fear the Walking Dead and impressing in meaty roles on The Knick and Euphoria — the diner-set special “Trouble Don’t Last Always” is still breaking hearts.

If you hadn’t seen his earlier work, marked by the kind of standout smaller roles that get major filmmakers calling, it was as if one of the most exciting new talents of his generation had come out of nowhere. Of course, that wasn’t the story for the man himself. “I feel like I’m a turtle,” Domingo says. “I’ve been on the slow crawl, just working, and being there and always doing something outside the box for myself. It’s been slow and steady, to be honest, it hasn’t been a sudden overnight sensation.”

The patient Domingo continues to explode in 2021, reaching new levels of acclaim and notoriety with two of his most interesting and challenging roles to date: In June, he explored new and villainous terrain, portraying a violent, code-switching pimp in Janicza Bravo’s off-the-wall road trip dramedy, Zola; this month, he delivers yet another invigorating multidimensional performance in director Nia DaCosta’s socially conscious slasher film, Candyman. With both characters he hopes to further show not just the breadth of his range but the depth of his work. “If you see me in Beale Street, yes, it’s probably a bit more in alignment to the Colman that they know in some way,” Domingo says. “But if you see Zola and Candyman, you know that’s not the truth. You can actually see the craftsmanship.”

The crawl began, as it does for many of Domingo’s caliber, in the theater where he wrote, directed, and acted, breaking out in the Tony-winning rock musical Passing Strange in the late 2000s and eventually winning the Tony for Best Featured Actor in a Musical for The Scottsboro Boys. A slew of TV and film work followed, with an enviable roster of major award-winning directors drawn to him like a magnet: Steven Spielberg (Lincoln), Steven Soderbergh (The Knick), Ava DuVernay (Selma), George C. Wolfe (Ma Rainey’s Black Bottom), and Jenkins among them.

He believes there’s an element those creators have in common: kindness. “It’s a spirit of true collaboration,” Domingo says, “people who want you to be in the room to help elevate this thing that’s on the page.”

A queer Black man, the actor balances portraying gay men on shows like The Big Gay Sketch Show against men who are coded straight: Civil Rights activist Reverend Ralph Abernathy in Selma, a swinging bandleader in Ma Rainey’s Black Bottom, an empathetic father If Beale Street Could Talk — calm, guiding forces. That diversity has always been intentional. “I believe I can do horror, do musicals and plays and leading men and character roles because I decided that,” he says. “I don’t let the industry tell me what I can do. I’ve always been a proponent of creating my own opportunities.” 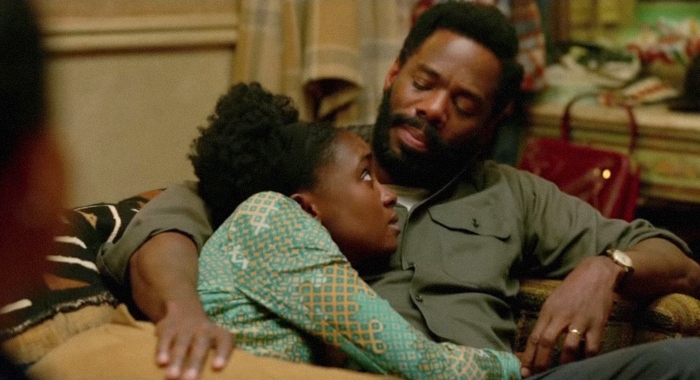 His two big 2021 releases – both of which were originally scheduled for 2020 but delayed due to the pandemic – show Domingo’s capacity to subvert audience expectations. Consider his turn as X, a vicious pimp and sex trafficker in the comedy-nightmare road movie, Zola, based on the viral 2015 Twitter thread by A’ziah King (a.k.a. “Zola”). “When Janicza offered me that role, I had just come off of Beale Street and I thought: Well, what has she seen in my repertoire that would make her think that I could play this role?,” he recalls. “A lot of times [people] try to put you in the boxes of what you are known for. They want you to regurgitate another version of that. But Janicza and Nia DaCosta both knew that there was so much more to me than that.”

The actor known for a reserved, smoky-voiced paternalism relished playing the ostentatious X. He built the character from the ground up, using King’s 148 tweets as inspiration, while adding his own embellishments, such as X’s flashy clothes and lone hazel contact lens, an idea he got from seeing a Nigerian-American sporting the look in New York City. “Everything about X was a little too much: His idea of wealth; his idea of having agency in the world,” Domingo says. “Everything was a show, from the crocodile shoes to the Versace shirts. I did a lot of research on pimp and pimp culture, whether reading biographies or having conversations with people in the sex industry and finding out about the relationships between pimps and clientele.”

Domingo is terrifying in every moment he appears on screen in Zola: He leans on his star persona in early scenes, imbuing X with heaps of charm, only to frighteningly turn – and code-switch to a menacing West Indian accent – during the film’s caustic second half. Yet even after watching that performance, his casting as the enigmatic William Burke in Candyman might have still come as a shock for some audiences. Especially if you know his history with the genre.

Domingo as pimp and sex trafficker X in Zola. (Photo by © A24 / courtesy Everett Collection)

“The first horror film I watched was Carrie when I was eight years old,” Domingo says. “My brother would take me to see Bruce Lee movies. My sister would take me to see horror. I didn’t like either one. I probably would be happier seeing Bambi, which is a terrifying movie, too.” The Brian De Palma film’s ending – that infamous hand shooting up from the grave – never left him. “From then on, when I walked past the movie theater on the way to school, there was a big poster of Carrie. It was half bloody and gory and the other half was beauty at the prom. It terrified me from going to dances and proms.”

Nevertheless, it feels as though Domingo was born to be in 2021’s Candyman. In relation to Bernard Rose’s 1992 film, the first in the series, this iteration takes place in the area where Chicago’s Cabrini-Green housing projects once stood. Domingo’s Burke owns a retro laundromat and is one of the last residents of the storied development. The real Black folks who once populated Cabrini-Green, which was located in the shadow of downtown’s glittering skyscrapers, are now gone; by 2011 the towering apartment complexes that once dotted the torn landscape were demolished, making way for new luxe townhouses. All that remains are haunting row houses.

Burke is a mysterious figure bearing deep emotional scars, and Domingo relied on real-life experiences to play him. “I’m from inner-city Philadelphia, West Philly,” he says. “I know these people. These people are me. I know exactly what their dreams, their aspirations, their struggles, their fears are. I just tapped into that.” 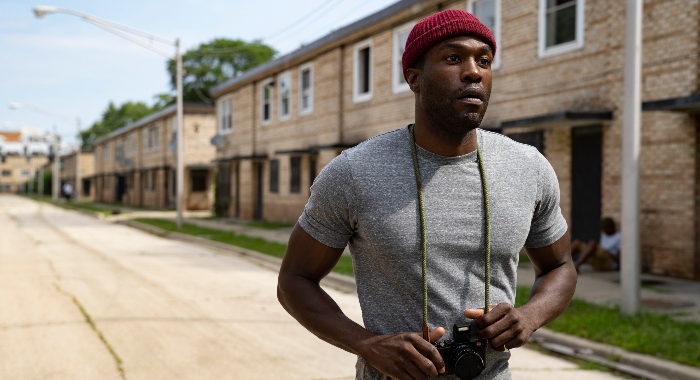 He also drew on the same techniques he used in Zola. “For Candyman, it was very important for me to build this everyman who was singular in his experience, holding together this Black trauma in this neighborhood,” Domingo says. “Whenever I take on any character, I go through hours and hours of research before I even hit a rehearsal or a set. I can show you notebooks of every decision I’ve made about William’s backstory: What he likes to eat, how he sleeps, what’s his sign, how does he like sex, how often does he have it, does he have it? I make every decision for every single character.”

Cabrini-Green itself was also crucial to his performance. The film was shot largely on location, and seeing the boarded-up windows, the patchwork of weeds and broken fences, you can almost feel the living memory of police brutality, trauma, and death. “From the moment I stepped on that soil, there’s something about abandoned buildings, and filming in these abandoned spaces – there are ghosts there,” he explains. “Especially if you know the history of the Cabrini-Green projects and the people who inhabited it. You know this land is now being gentrified because it’s actually the most auspicious land in the city. It was once redlined to be just for disenfranchised people of color. You’re looking at America when you’re standing there.”

With experience as a playwright (penning SUMMER: The Donna Summer Musical, Lights Out: Nat “King” Cole, and more), Domingo has plans to adapt his plays into shorts and feature-length films. “I have one piece that I’ve been quietly working on in animation that hopefully I’ll talk about soon,” he reveals, along with plans for directing. “I’ve just agreed to be a part of an experience playing a legend. I won’t tell you who, but he’s a musical legend. That is one of my greatest inspirations.”

For now, he hopes Candyman, which taps the chords of gentrification, Black Lives Matter, and the valuation of Black-made art, becomes a driver for important and urgent conversations. “After all, [the movie] is entertainment, but it’s not the entertainment where you can just walk out, go get your car keys, and head home. You want to unpack so many things. It’s going to be like a great album. You may not understand every song, but some songs are going to hit hard, and you won’t be able to get them out of your mind.”