A hidden Kurasawa gem, the original "gaslighter," and some landmark performances from Davis, Rowlands, Bergman, and O'Toole feature in our guide to Hollywood's most compelling early looks at insanity. 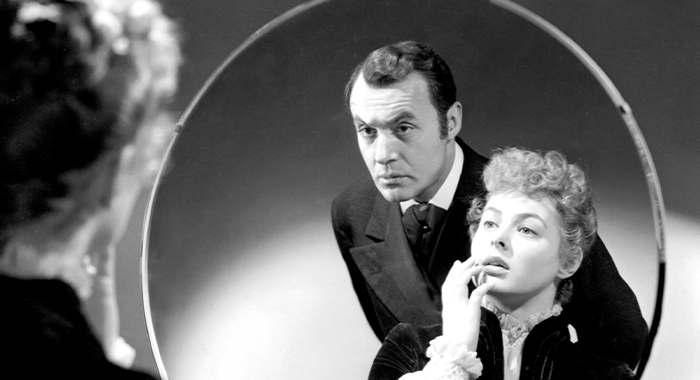 (Photo by Gaslight - The Everett Collection)

Our Classic Film Catch-Up feature connects you with classic films to put on your watchlist – beloved favorites and hidden gems alike. With more time at home, there’s no better opportunity to finally watch these titles that helped define cinema as we know it.

In the RT comments, many of you have shared how you’re catching up on classic films during the pandemic, and we happen to agree that now is the perfect time to increase your classic film viewing. Many of you are stuck at home, so, why not?

Concentrating on films released before 1980 (both well-known titles and hidden gems), we’re producing new guides to essential classic films curated by theme, filmmaker, actor, genre, or style – all for your classic catch-up needs. Want to see our picks for the best French farces? How about a curated list of Fresh picks from Alfred Hitchcock, Peter Sellers, or Billy Wilder? As well as curating watch lists, we’re breaking down the films, telling you where you can watch them, and giving you some more recent and/or well-known films the classics might remind you of so you can gauge which movies are right for you.

This week in the Classic Film Catch-Up, because we all go a little mad sometimes, we’re focusing on films that chronicle the slow descent to insanity. From the works of Wilder to Hitchcock and Scorsese, madness has been the cornerstone of some of the greatest moments in the history of cinema. You’ve likely already spent time with Travis Bickle in Taxi Driver, Norma Desmond in Sunset Boulevard, and Jack Torrance in The Shining, so we have left those iconic films off our list in favor of lesser-known gems.

Some titles on this list have cult-like followings, while others are less popular entries from the filmographies of iconic filmmakers like David Lynch, and Akira Kurosawa. Either way, they’re sure to thrill and disturb – so watch at your peril.

Got another favorite classic film about madness you’d add to our list? Have a suggestion for a future theme or classic film to feature in the column? Let us know in the comments.

What is it? Two aging child-star sisters are trapped in a decrepit Los Angeles mansion clinging to past glories, mutual hatred, and growing co-dependency.

Why you need to see it: Joan Crawford and Bette Davis‘s decades-long feud is the stuff of Hollywood legend, so much so that they dedicated an entire season of award-winning television to it. A centerpiece of the limited series Feud: Bette and Joan is the filming of Oscar-winner Whatever Happened to Baby Jane?. For her showy turn as Baby Jane, Betty Davis scored her 10th Oscar nomination, but Crawford gave as good as she got as the paraplegic Blanche. Baby Jane begins the film resentful of her sister, with delusions of an imminent comeback, and she ends the movie in the midst complete psychotic break, thinking a crowd of beach-goers staring aghast at her depravity are adoring fans. In a performance that rivals Gloria Swanson in Sunset Boulevard, Davis showed yet again why she was one of the greatest actresses in the history of Hollywood. 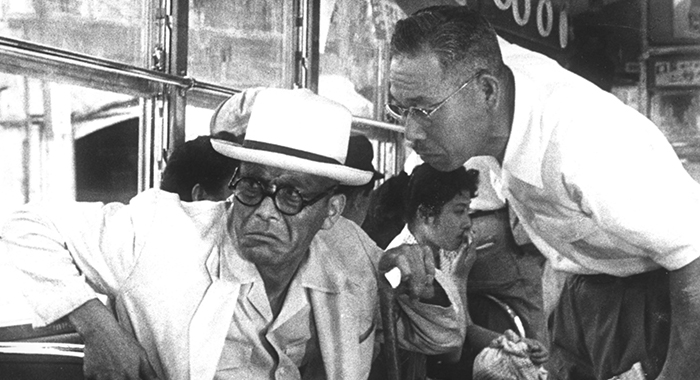 What is it? An older man goes to great lengths to move his family to South America as a way to avoid a nuclear attack.

Why you need to see it: A man fearful of a global crisis goes to extreme lengths to keep his family safe… that doesn’t sound familiar at all. Kiichi Nakajima (Toshiro Mifune) is a man so fearful of a nuclear attack on Japan he becomes fixated on the idea of moving his family to Brazil, and his family, in turn, becomes increasingly disturbed by his bizarre proposal; Kiichi’s family’s dismissal of his fears and attempts to have him committed only to increase his anxiety about nuclear fallout. Later on in the film, however, the audience is forced to ponder the question of which is more insane: fearing a nuclear blast or ignoring the risks and not preparing for it. Visionary director Akira Kurosawa‘s first film after his epic masterpiece, Seven Samurai, I Live in Fear is a departure for the master of Japanese epics but endures as a compelling and though-provoking thriller that will have you questioning the line between paranoia and prudent preparation.

Watch it if you like: 10 Cloverfield Lane, Take Shelter, It’s a Disaster, The Book of Eli, It Comes At Night, A Quiet Place

Where to watch: Stream now on Kanopy and Criterion Channel.

What is it? A nerd-like protagonist with a very peculiar hairstyle faces a number of horrifying obstacles while trying to complete the most menial tasks.

Why you need to see it: Explain Eraserhead? It would be easier to explain a rainbow to someone without sight. The groundbreaking horror film follows Henry, a peculiar man with a jaw-dropping hairstyle, as he’s hit with disturbing challenges at every turn and eventually nosedives into delusion. Henry’s journey is a tough watch but worth it to appreciate the artistry. Auteur director David Lynch went to extraordinary lengths to complete his debut film – even going as far as sleeping on the set – but regrettably was rewarded with mostly negative reviews for his avant-garde and experiential body horror film. Variety wrote that “the mind boggles to learn that Lynch labored on this pic for five years,” but some contemporary critics and audiences praised the nightmarish black-and-white film. A true cult classic, Eraserhead is required viewing for any cinephile looking to expand their brag-worthy watchlist.

Watch it if you like: Gummo, Mulholland Drive, Twin Peaks, Mandy, The Wicker Man, Suspiria, Videodrome

Where to watch: Stream now on HBOMax, Kanopy, and Criterion Channel. 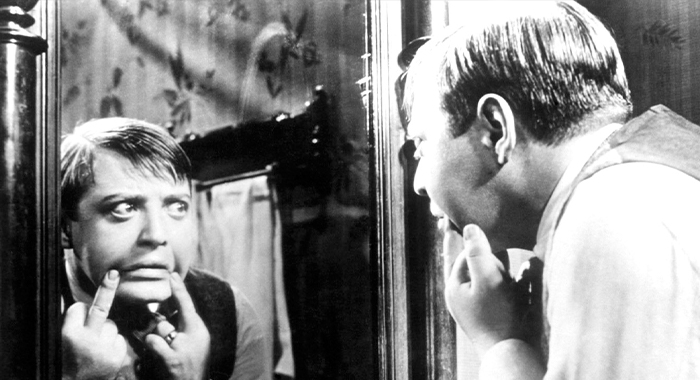 What is it? A thriller that follows the manhunt, capture, and trial of a child serial killer.

Why you need to see it: Listed as one of the “Great Movies” by film critic Roger Ebert M is widely considered silent film director Fritz Lang’s masterwork. Documented as the first film to marry character themes to film scoring, the serial killer thriller employs many silent film techniques to elevate its haunting imagery and limited dialogue. In another film in which the descent into madness is a short ride, our main character, the child-murdering serial killer Hans Beckert (Peter Lorre), is established as insane from his first introduction but proceeds to drift further after his capture and “trial.” Banned by the Nazis after taking power in 1933, the film was not widely viewed until the 1960s when it was re-evaluated as a landmark achievement in cinema. It remains 100% Certified Fresh on the Tomatometer.

Watch it if you like: Metropolis, Prisoners, The Silence of the Lambs, Zodiac, Psycho, Nosferatu (1922), Shutter Island

Where to watch: Stream now on HBOMax, HooplaDigital, Kanopy, and Criterion Channel. 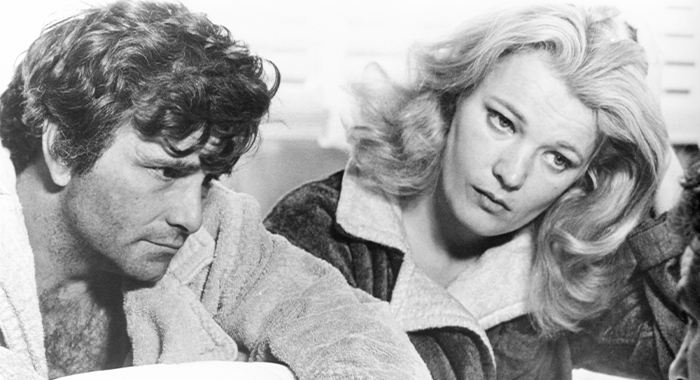 What is it? A housewife on the verge of a breakdown and her husband struggle to maintain their family as they deal with the crippling effects of her mental illness.

Why you need to see it: If by chance your only exposure to Gena Rowlands is The Notebook and your only knowledge of Peter Falk is as Columbo, do yourself a favor and watch A Woman Under the Influence. Rowland pitched the idea of a contemporary drama about the plight of women to her husband, director John Cassavetes, and the result is one of the filmmaker’s finest efforts. Falk and Rowlands’ performances as a married couple brought to their knees when the matriarch’s illness renders her unable to function are equally delicate and devastating. Influence builds subtle tension with Rowlands’ fall into a manic psychosis, and manages some biting social commentary about gender roles in the family and marital expectations as it does. A hit at the box office, it also garnered Oscar nominations for both Rowlands and Cassavetes – an appreciated result as Cassavetes had mortgaged the family home to finance the picture.

Where to watch:  Stream now on HBOMax and Kanopy. Rent or buy on Vudu or Amazon.

What is it? An opera singer marries a charismatic man who then subjects her to psychological torture.

Why you need to see it: Don’t you want to see the film that sparked the slang? “Gaslighting” has become a common word in the pop-culture lexicon – see the Chicks’ latest album – but few know that the term for repeatedly saying untruths to make someone feel like they’re going insane derives from this remake of a 1940 film, in which a woman is driven insane by her husband repeatedly telling her lies in an effort to steal her fortune. In her Oscar-winning performance, Ingrid Bergman subtly deteriorates on screen from the calculated torture of her husband, played by Charles Boyer. After one viewing, you might think twice when your significant other contradicts something you said.

Watch it if you like: A Beautiful Mind, Invisible Man (2020), Funny Games, Unsane, The Lodge, A Cure for Wellness

Where to watch: Stream now on IndieFlix. Rent or buy on FandangoNOW, Vudu, Amazon, Google Play, and iTunes. 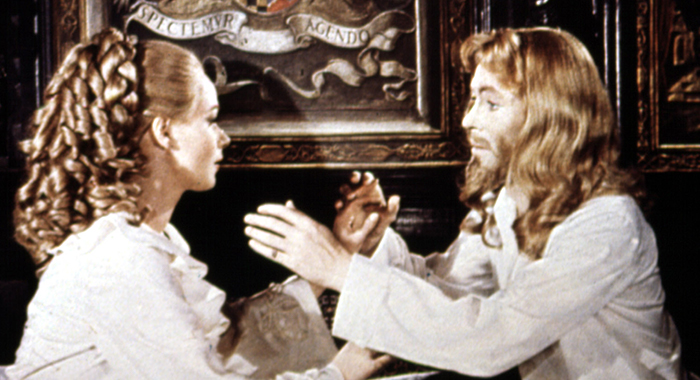 What is it? A paranoid schizophrenic becomes an Earl in the British aristocracy.

Why you need to see it: A relatively light-hearted departure from the other entries on our list, The Ruling Class uses madness as a counterpoint to the insanity of the British aristocracy and inherited power. Peter O’Toole stars as the insane son of a British nobleman who inadvertently inherits a peerage. An institutionalized paranoid schizophrenic with a Messiah complex, O’Toole’s character delves deeper into insanity fueled in large part by the institutions around him refusing to acknowledge he’s unfit to rule. The satirical black comedy was a commercial flop, but – as is the case with many films on our list – found an adoring audience and cult-like status in later years.

Watch it if you like: Black Swan, We Need to Talk About Kevin, The Madness of King George, Observe and Report, Barton Fink

Where to watch: Stream now on HBOMax, Kanopy, and Criterion Channel.