Season 4 may shut the lid on the adventures of Alucard, Trevor, and Sypha, but there are more stories to be told from the world of vampire video game adaptation Castlevania. 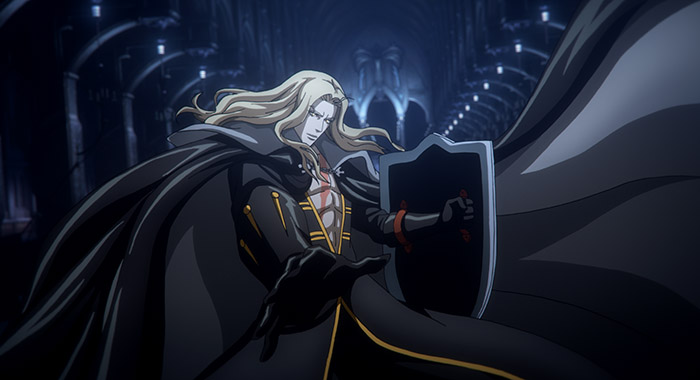 As Castlevania executive producer Kevin Kolde reminded Rotten Tomatoes recently, the intent of the Netflix Anime series was to tell the story of the 1990 Konami video game, Castlevania III: Dracula’s Curse. That game featured vampire hunter Trevor Belmont teaming up with elemental witch Sypha Belnades, pirate Grant Danasty, and Dracula’s son, Alucard, to take down the infamous vampire on his own home turf. The twisting, gear-filled geography of Dracula’s castle — and the unique abilities of the four playable characters — made for some great game play and good narrative hooks for subsequent Castlevania games. It also offered the anime a strong place to start in terms of story. Although, as Kolde noted, the plan to adapt the game had the production “really thinking about the story in terms of those two seasons.”

“[Then] the response was so great, and we were fortunate enough to be approached about continuing the story,” he said. “Then we really sort of took another look at how to expand it and how to extend the story, and that’s where we got with season 3 and ultimately season 4.”

To Kolde, the series is really two parts: the Dracula’s Curse adaptation and its aftermath, the final chapters of which are now available on Netflix. For those devoted to the program, it will be sad to see  Castlevania come to a close with this last set of 10 episodes, which draws the curtain on the journeys of Trevor, Sypha, Alucard, Isaac, Hector, and Carmilla.

“We definitely planned that season 4 would be the end of this particular story for these characters,” Kolde said.

As teased in the recent trailer, the final season sees Trevor and Sypha battling forces intent on resurrecting Dracula while Alucard finds a clutch of Night Creatures to fight. And though seemingly separate, their stories will lead to the place where it all began.

Of course, it wouldn’t be a season of Castlevania without at least one introduction, so fans will be pleased to hear the voice of the legendary Malcolm McDowell as Varney, a curious British vampire who utterly believes his fame precedes him.

“As I look at our cast list, I am shocked and proud and amazed at the level of amazing talent that we’ve gotten on the series. And Malcolm is certainly the cherry on the top of everything in season 4,” Kolde said.

“I’m a huge fan of [McDowell], as I am of all the actors in this series. It was great and he did amazing,” Kolde said. The producer found the performance so great, in fact, that he changed a scene that originally called for Varney’s voice to be processed with effects once he heard how it altered McDowell’s performance. “[I said] ‘Just leave it as is, we just need straight Malcolm here!’” 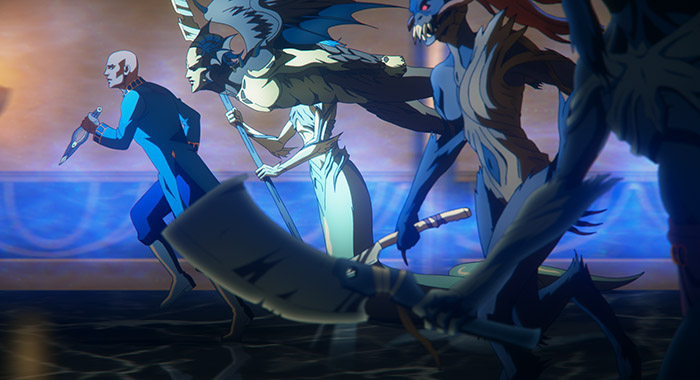 Keeping true to the spirit of Castlevania, the season also features plenty of battles against Night Creatures that can be quite graphic. Asked if the animation team ever produced a design for a Night Creature he found too extreme, Kolde said, “I believe at one point, [there was] a Night Creature design that looked very much like a creature from Stranger Things that we had to say no to. But yeah, I think that was the only time that we canceled one.”

Another consistency of Castlevania is its oddly chaste romantic subplots — particularly the one between Trevor and Sypha. Although the romance between Dracula (Graham McTavish) and Lisa Ţepeş (Emily Swallow) is at the very core of the series, Kolde maintained the limited affection on screen and rare direct declarations of feelings “felt right” for the characters.

“They’re dealing with so many other things that are sort of life-changing; dramatic obstacles and issues there in front of them. It just feels like those subtle moments work fast. When you see Trevor and Sypha having a quiet moment, or Trevor talking to himself about his feelings, those things feel real for the world that they live in,” he explained. “Those moments become more special,” he added, for their scarcity in a story where darkness, plotting, and counter-plotting often reigns supreme. 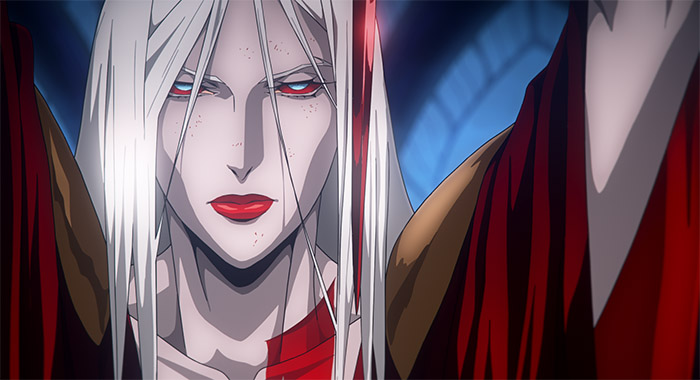 And speaking of plotting and counter-plotting, Kolde felt the development of Issac’s character (M’Cormack) across the series proved to be the most surprising. Starting as a Devil Forgemaster in Dracula’s service in season 2, Isaac spent the next season amassing an army and planning his revenge on those who wronged him — particularly Carmilla (Jaime Murray), a member of Styria’s ruling vampire council. His journey back from the desert to Eastern Europe altered his intentions, however.

“I don’t think it’s really what’s expected, we start to see him changing and developing in season 3, which comes to sort of a culmination in season four,” Kolde said. “His transformation and realization about the world is great.”

Indeed, other characters like Hector (James), Lenore (Findlay), and Carmilla come to various “culminations” that may also surprise viewers — particularly as the world of Castlevania will continue and may include some repercussions from the characters’ actions. 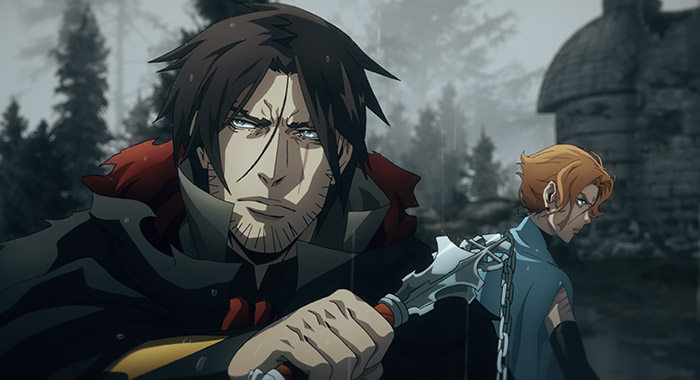 A continuation of the franchise is speculation. Kolde could not reveal too much about the next iteration of Castlevania. What is known: the program will not be a spinoff, but likely a new series with a new cast of characters within the Castlevania universe. We will suggest that could mean a show focused on original Castlevania game protagonist Simon Belmont. But at the same time, the various games have introduced other protagonists not seen in the current series and even slotted in Alucard as the primary playable character.

There is a lot to work with and as Kolde told us, “I’ll look to those things in future series.”

But one character fans still hope to see in the current program is Castlevania III’s Grant Danasty. The acrobatic pirate — whose key play feature within the game is his ability scale walls — was an early deletion from the core set of characters as a writer on the program felt he was out of place in the fictionalized Eastern European region of Wallachia. And in practical terms, a core trio of Trevor, Sypha, and Alucard better severed the shape of the program’s two major stories. 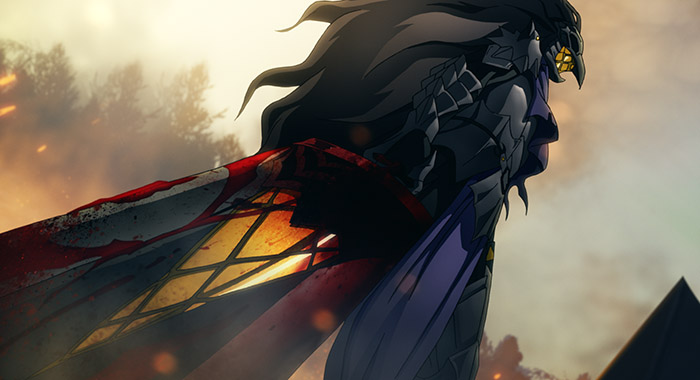 “I always laugh because every time there’s a new Castlevania trailer, or there’s information that’s put out there, like the new cast members for season 4 and the characters they play, there’s always the ‘Where’s Grant?’ responses,” Kolde said.

Beyond a few offhand references to the character in season 3, the production never found a place for him.

“We have had so many conversations about how to put Grant in the show or in a post-credits scene,” Kolde said. “Unfortunately, we’ve never had the time to bring any of those things to fruition.”

Maybe there will be a place for him next time …

All that said, Kolde believes fans of the series will enjoy its final run of episodes and see its conclusion as a satisfying place to leave the characters.

“It felt like the right place to end it,” he said, adding something that “does feel like a boss fight” may be waiting for fans as they enter Castlevania one last time.