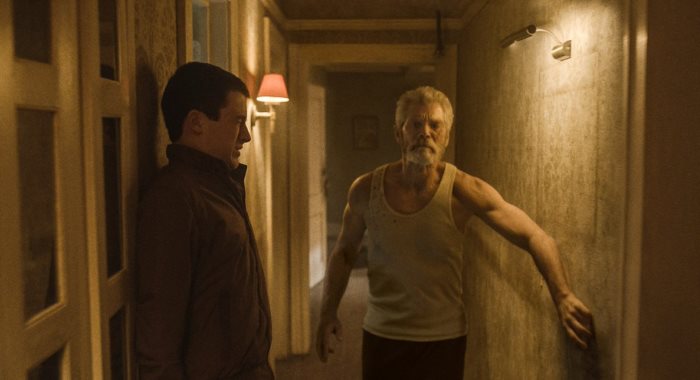 If there is one genre that has been consistently drawing moviegoers to the multiplexes this summer it’s horror. And the latest scary movie to overperform and rock the box office was Don’t Breathe which soared past expectations to open at number one with an incredible $26.1M, according to estimates. The low-cost $10M Sony release averaged a stellar $8,559 from 3,051 theaters and earned fantastic reviews from film critics which helped convince fright fans to take a chance. Audiences gave a good B+ grade according to CinemaScore which is an above average mark for a horror pic.

The story of a blind man who turns the tables on robbers breaking into his house joins The Secret Life of Pets as the only two original movies to hit number one this entire summer. And that toon came from an established animation powerhouse (Illumination) plus had a warchest of marketing dollars. All others were either sequels or franchise films like Suicide Squad.

Late August typically sees weak openings making this performance especially impressive. In fact for the second half of the month (August 16 to 31) only five movies have ever opened stronger. With positive buzz and the four-day Labor Day holiday weekend coming up, Don’t Breathe may end up grossing seven times its budget by the end of its domestic run becoming a nice little profitable hit.

Harley Quinn and her villainous pals got tossed out of the number one spot after their three-week reign but still managed to post a good hold as Suicide Squad dropped a reasonable 42% to an estimated $12.1M for second place. Warner Bros. has taken in a hefty $282.9M to date and should surpass the $291M of Man of Steel by next Sunday on its way to a final domestic gross of over $310M. That would be only about 5% below what Batman v Superman ended with.

International grosses rose to $353.1M putting the new worldwide haul at $636M on track for about $730M in the end which is terrific considering it will not include any grosses from China which was BvS‘s number one foreign market with $95M. To date, the three films from the DC Extended Universe have grossed a combined $2.17 billion.

Five films followed with weekend grosses within a tight $7-8M range so positioning could change when studios report their final numbers on Monday. Enjoying a terrific sophomore hold was the critically-acclaimed animated adventure Kubo and the Two Strings which slipped 37% to an estimated $7.9M giving Focus $24.9M to date. It may see another strong hold over the long Labor Day weekend coming up so a final tally in the $50M range seems likely. Buzz has been superb with both reviewers and audiences alike.

Another unorthodox toon followed. Sony’s R-rated Sausage Party fell 51% to an estimated $7.7M putting the total at $80M on its way to possibly breaking $100M. Jason Statham’s latest solo action vehicle Mechanic: Resurrection opened with an estimated $7.5M from 2,258 locations for a mild $3,322 average. The Lionsgate title debuted in line with the actor’s recent similar films like Homefront and Parker which bowed to about $7M a piece.

Sliding only 36% to an estimated $7.3M was Disney’s Pete’s Dragon which has collected $54.7M thus far. It should end up in the $75-80M range just like the studio’s Alice Through the Looking Glass did earlier this summer. War Dogs fell 51% in its second weekend to an estimated $7.3M. Paramount sits at $27.8M and may end up at about $45M. Posting the best hold in the top ten was the raunchy comedy hit Bad Moms which took in an estimated $5.8M dipping only 28%. The STX release has banked $95.5M and should crack the century mark by Labor Day.

Jason Bourne fared well too slipping 35% to an estimated $5.2M giving Universal $149.4M to date. Despite the returns of Matt Damon and director Paul Greengrass to the franchise, and higher ticket prices, the new Bourne looks unlikely to top the domestic grosses of Damon’s last two installments in this series – 2007’s The Bourne Ultimatum and 2004’s The Bourne Supremacy – and may end at about $165M. Global to date is $347.9M. The big-budget dud Ben-Hur rounded out the top ten with an estimated $4.5M, down a troubling 60%, putting MGM and Paramount at only $19.6M. The $100M-budgeted film will be lucky to reach $30M from North America.

Debuting to decent results in moderate national release was the Obama first date pic Southside With You with an estimated $3.1M from 813 sites for a $3,764 average. Reviews were quite positive for the Roadside Attractions/Miramax film which came out of Sundance. Opening poorly outside the top ten was the boxing drama Hands of Stone with an estimated $1.7M weekend from 810 locations for a weak $2,141 average for The Weinstein Co. Reviews were lackluster for the R-rated pic. Still expanding and still faring well was Hell or High Water which went from 472 to 909 theaters and grossed an estimated $3.7M for a good $4,098 average. Total to date for Lionsgate and CBS is $8.6M.