Baby Driver rolls into second, while Transformers takes a tumble to third. 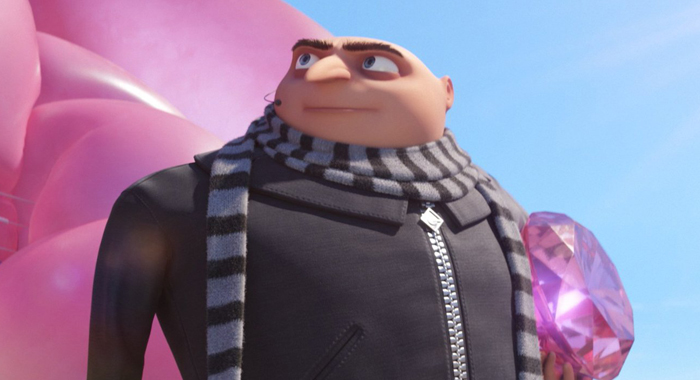 This weekend, Gru was back again, stealing the number one spot, but his box office star faded. Universal’s toon threequel Despicable Me 3 launched to an estimated $75.4M grossing, more than the next five films combined. However, franchise fatigue kicked in, as the figure fell from the openings of the last two movies from this series. The average was $16,651 from an all-time industry high of 4,529 theaters.

DM3 opened a troubling 35% below the $115.7M of the spinoff Minions from July 2015, which did not even feature Steve Carell as Gru. Despicable Me 2 bowed to $143.1M over its five-day launch over the Fourth of July holiday in 2013, and the new chapter will likely drop 25-30% from that figure in its first five days. Even last July’s animated entry from Universal and Illumination, The Secret Life of Pets, did much better, premiering to $103.2M in three days.

Reviews were mixed for the film and the CinemaScore was a good A-. The $100M mark should be crossed on the Fourth of July holiday this Tuesday. After that, Spider-Man: Homecoming kicks off on Thursday night and may act like a buzzsaw, cutting into part of DM3‘s audience. Luckily, there is not much else for younger kids all month until The Emoji Movie opens at the very end of July.

Despicable Me 3 went out into 46 new international markets this weekend, grossing an estimated $95.6M boosting the overseas cume to $116.9M, including some markets that bowed earlier. The worldwide total stands at $192.3M to date with plenty of top territories still to open, including China, Korea, Japan, France, and Germany.

Making a big splash in second place was the action thriller Baby Driver from writer/director Edgar Wright, which debuted to an estimated $21M over the Friday-to-Sunday period and a stellar $30M since debuting on Tuesday night with pre-shows. The R-rated film starring Ansel Elgort, Kevin Spacey, Jon Hamm, and Jamie Foxx earned rave reviews across the board, which helped to spark interest from moviegoers. That was key, since this is an original movie competing in a marketplace flooded with known brands. The mid-week launch also got word-of-mouth going which helped convince many more to go out and see it by the time the weekend rolled around.

Sony research showed that the crowd was 55% male and 61% 25 and older. Budgeted at $34M, Baby Driver was expected to post a solid debut but these numbers exceeded industry expectations. The A- grade from CinemaScore showed that ticket buyers liked what they paid for and the road ahead is promising, thanks to the great reviews and buzz. Joining Get Out and Split, Baby Driver has shown again that audiences this year are coming out in large numbers for quality original films from talented writer/directors. Those three films cost less than $50M combined, but will gross over $600M worldwide.

Tumbling down from first to third place this weekend was Michael Bay’s fifth Transformers movie The Last Knight with an estimated $17M, down 62% from its opening weekend. Paramount has collected $102.1M to date for the pricey sequel, which should end its domestic run in the vicinity of $130M, a big drop from the $245.4M of the last installment Age of Extinction, and by far the lowest ever for the whole franchise. Overseas, the top global market of China also saw a fast fade with a 76% nosedive in the second weekend. Total there is $193.5M, the international cume is $327.8M, and the worldwide tally so far is $429.9M. The global final may be headed for the neighborhood of $650M for a sizable 40% fall from the $1.1 billion of the last chapter.

Leggy comic book smash Wonder Woman declined by only 38% to an estimated $15.6M, pushing the domestic total to a robust $346.1M. That ranks number four all-time for the fifth weekend gross of a super hero film after only Avengers, Guardians of the Galaxy, and The Dark Knight. Diana has climbed to number 42 on the list of all-time domestic blockbusters replacing last year’s Zootopia. With good stamina and the holiday week ahead, Wonder Woman still looks set to finish its North American run in the area of $390M.

International grosses rose to $361.8M for a new global take of $707.9M surpassing Dawn of the Planet of the Apes, Mission: Impossible – Rogue Nation, and Doctor Strange. The next challenge for the DC hit will be to face competition from a pair of promising franchise tentpoles opening over the next two weeks that were screened for press early and have already earned stellar reviews – Spider-Man: Homecoming and War for the Planet of the Apes.

This summer has seen many sequels fall below their predecessors, and Cars 3 from Disney and Pixar is no different. The G-rated toon fell a sharp 62% to an estimated $9.5M for a cume of $120.7M. Enthusiasm around this title has only been moderate. Cars 3 is set to finish as the second lowest grossing Pixar movie ever beating only The Good Dinosaur.

Will Ferrell also suffered from audience rejection with his latest comedy The House which opened poorly to an estimated $9M from 3,134 locations for a weak $2,872 average. The R-rated pic from Warner Bros. co-starring Amy Poehler generated little excitement with audiences and follows a trend of R-rated comedy misfires coming out of Hollywood recently. Next up for the genre is Girls Trip hoping to shake things up on July 21.

Shark thriller 47 Meters Down fell 34% to an estimated $4.7M putting Entertainment Studios at $32.6M. The Civil War period drama The Beguiled expanded nationwide after a strong platform start and grossed an estimated $3.3M for eighth place. Focus averaged a respectable $4,837 from 674 locations for a cume of $3.6M.

Tom Cruise’s actioner The Mummy dropped 54% to an estimated $2.8M lifting the domestic total to $74.5M. Universal has banked $369.9M worldwide to date. Another pricey star-driven Hollywood tentpole underperforming domestically followed with Pirates of the Caribbean: Dead Men Tell No Tales at an estimated $2.4M, down 55%, for a $165.5M cume for Disney and $708.7M worldwide. China is the top-grossing market on both films beating North America with $90.9M and $172.3M, respectively.