The Best Musical Moments From the Cast of Supergirl, The Flash, Arrow, and Legends of Tomorrow 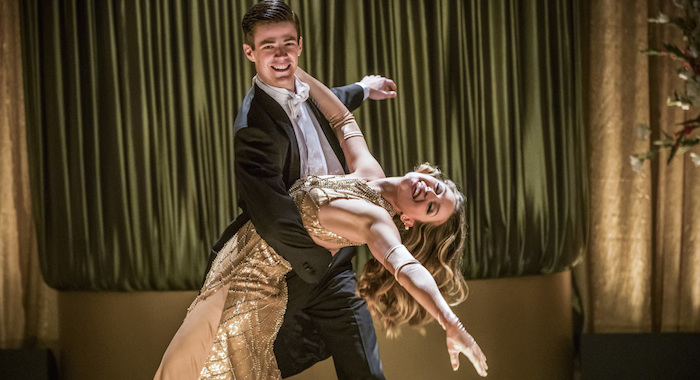 The Arrrowverse has a lot of musical talent. Two of their title heroes, Supergirl and The Flash, came from Glee. Many others cast members were on Broadway, and some have released albums. So when The Flash was doing a musical episode, it just had to crossover with the stars of Supergirl, Arrow, and Legends of Tomorrow.

At the end of Supergirl‘s episode Monday night, “Star-Crossed,” The Music Meister (guest star Darren Criss) puts Kara (Melissa Benoist) into a coma. J’onn J’onzz (David Harewood) and Mon-El (Chris Wood) take Kara over to The Flash’s Earth for help in episode “Duet.” Music Meister gets Barry (Grant Gustin), too, and the rest of the episode will play out as a musical fantasy featuring the characters from all four shows, including Malcolm Merlyn (John Barrowman) and Dr. Stein (Victor Garber).

Here’s a breakdown of the musical cred of the stars of Supergirl, The Flash, Arrow, and Legends of Tomorrow, starting with Team Supergirl, with a clip highlighting each singer. (J’onn J’onzz and Mon-El have reportedly have non-singing roles in “Duets.”)

There were so many cast members in Glee, it was sometimes hard to give them all a song. Marley (Benoist) performed in a lot of group songs and shared a killer duet mashup of “Crazy/Drive Me Crazy.” She got to be Sandy in Grease until Rachel (Lea Michele) took over halfway through “You’re the One That I Want.” She even got to be Posh Spice with a zig-a-zig-ah in “Wannabe.” Her solo of “Wrecking Ball” really let Benoist belt it out and ride the ball. Hopefully, The Flash gives her a bravura solo like this one.

Smash allowed Jeremy Jordan to cross over from Broadway to television, employing his triple threat acting/singing/dancing skills. The fictional show on NBC’s Broadway drama couldn’t compete with Jordan’s real theater cred. Having appeared in the ensemble of Rock of Ages, Jordan then played the leads Bonnie and Clyde (Clyde) and Newsies (Jack Kelly, the Christian Bale role in the movie). The only downside of Supergirl is it kept Jordan from singing. Until now!

Criss was a theater kid and recording artist. With his University of Michigan friends, Criss co-founded StarKid Productions in which Criss played Harry Potter in a trilogy of musicals. On Glee, he introduced the show’s all boy a cappella group, The Warblers, which briefly recruited Kurt (Chris Colfer) in season 2. After Glee, Criss has earned raves for his title role in the revival of Hedwig and the Angry Inch on Broadway and on tour. Hedwig had a sex change operation to escape pre-WWII Germany with a G.I., but the operation was botched leaving Hedwig feeling like neither gender, and the G.I. left. The songs encompass anger, sorrow, and bittersweet joy. If you want to see any more, you’d have to buy a ticket.

Sebastian Smythe (Gustin) popped in and out of Glee so he didn’t get to do as many songs as the regulars. Plus, he was a villain! Under Smythe’s leadership, The Warblers covered some classic Billy Joel like “Uptown Girl” and Michael Jackson from “Bad” all the way back to The Jackson 5’s “I Want You Back.” One Jackson song gave him a one-on-one with Santana (Naya Rivera) doing “Smooth Criminal” to a cello accompaniment.

John Barrowman’s stage credits are as impressive as his run on Doctor Who and its spinoff Torchwood. Anything Goes, Phantom of the Opera, Hair, Miss Saigon, Beauty and the Beast, Godspell, Putting It Together, and many nonmusical dramas too. He’s even released albums covering classic showtunes and standards. So many to choose from, but above is the song he calls his anthem. Here’s Barrowman performing it live at the Royal Albert Hall in concert.

Jesse L. Martin was part of the original company of Rent when it conquered Broadway in the ’90s. He even reprised his role for the movie. Since Rent he’s had a long TV career with a steady gig on Law & Order. When he returned to stage, it was for Shakespeare, not musicals. So The Flash will hopefully be the first chance to hear him sing a song like “I’ll Cover You” again.

Valdes studied musical theater and performed in High School Musical, The Wedding Singer, and Jersey Boys on stage. Cavanagh was in Grease, A Chorus Line, Cabaret, and more on Broadway. Cavanagh has even appeared in some videos on Valdes’s music YouTube channel for his jazz band The Los. You can find The Los’s tracks and EP on iTunes as well as Band Camp, Spotify, and other audio services. Valdes’ goes solo in his smoldering video for “Night Off!”

Victor Garber had a long musical history before he ever appeared on camera. He was in the Canadian folk band The Sugar Shoppe and on stage in Godspell, Sweeney Todd, and Tony-nominated musical roles in Little Me and Damn Yankees. Fortunately, many of Garber’s ’90s performances are preserved on YouTube and televised awards shows. One could fall down a rabbit hole watching old Garber performances, so here’s Garber singing George Michael’s “Freedom” on the short-lived Eli Stone.