The composer of some of cinema's most iconic themes talks creating a sound for the Avengers, jazzing up a heist, and Endgame's most challenging scene. 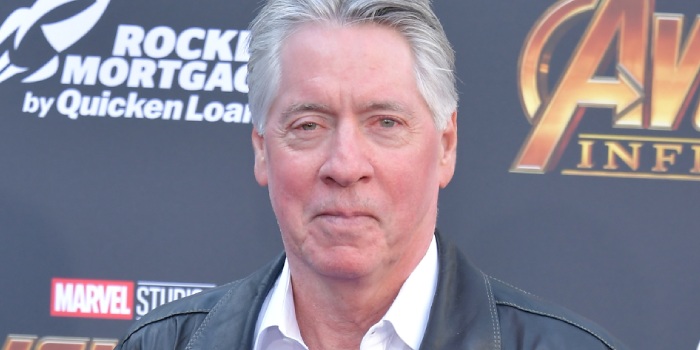 Alan Silvestri has composed the music for 17 of Robert Zemeckis’ movies, which sounds like a perpetual golden ticket to Oscar glory. Instead, Silvestri has only been nominated once for Best Original Score: for 1994’s Forrest Gump, which fell to The Lion King. Silvestri will have to take cold comfort in the fact his scores are among the most beloved and remembered in contemporary movie history, a body of work including the Back to the Future trilogy, Predator, The Polar Express, and now the Avengers theme.

He entered the Marvel Cinematic Universe scoring Captain America: The First Avenger, returning a year later for 2012’s The Avengers, introducing a now iconic theme that has carried into Age of Ultron, Infinity War, and now Endgame. With the dust settling on the MCU’s blockbuster emotion-wringer, Silvestri spoke on the origins of the Avengers theme, the temptation of using themes for every superhero, and his favorite Endgame musical moment.

Alex Vo for Rotten Tomatoes: What were the origins of the Avengers theme? When did you start working on it, and when did you know you had it?

Alan Silvestri: I had done Captain America for Marvel and got a call from Kevin Feige and Joss Whedon about Avengers. And they were very interested in exploring some possibility of [what] would become the Avengers theme. Time went on and I started to work my way into the film. When the mission is something like [coming up] with an overall theme, I try to find some place in the film that is going to be the quintessential spot — where whatever the theme is, it’s going to have to work here.

I wound up going to that place in the film where they’re all gathered and they’re in the midst of this battle, and it’s right after Banner arrives on a motorcycle. And it was such an interesting place in that film because these folks are in the middle of this big battle and it’s all terrible and dangerous. All of a sudden they’re in the town square, shoulder to shoulder, and nobody’s moving. They’re just literally posing. And it was the iconic Marvel still of the Avengers. And so the theme, whatever it was going to be, had to really carry that moment and help. I knew it had to be something heroic. Long, heroic, brass-filled notes in this melody, but we were also in the middle of this battle. So we needed to keep the energy up. So there’s this string ostinato that that keeps the sense of drive. One thing led to another and that that’s what came out, and it has lived on through the Avengers films, which has been fantastic. 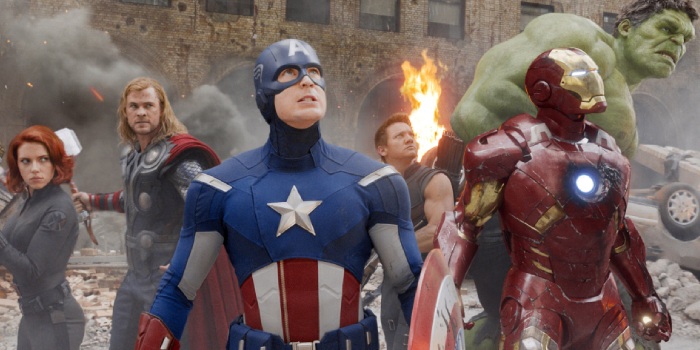 Rotten Tomatoes: Iconic superhero themes usually serve one person, like Batman or Superman. What was the challenge in scoring a group?

Silvestri: We talked early on in Avengers, and we also revisited the conversation in Infinity War and Endgame, about how you actually approach the characters thematically. Or how you don’t approach them. I mean, clearly the Avengers experiment had to do with this collection of superheroes now fighting together as a team. And so, the conversation would come up: Are we going to really play a theme for each of the individuals and then have an Avengers theme or not? Certainly in Endgame, because of the sheer number of characters, we felt like the music had to hold things together and unify the film, and that if every one of these characters had their own signature themes, it could wind up doing just the opposite and become too distracting and fragmented.

So again, the theme had to work for the collective, for the Avengers as a group, even though we did some call outs in all the films to some specific characters. Natasha had her bit of a theme in the original Avengers. Thanos clearly had his theme in Infinity War and Endgame. We tried to view the film musically from the point of view of the group. And the other interesting thing we found: With the Avengers theme, a little goes a long way. It’s a very simple, identifiable piece of thematic material, and you can abuse it just as easily as you can use it. So we knew we had to be very judicious in when and how we used the theme.

Rotten Tomatoes: The actors don’t get the full script for these movies. At what point are you brought in the process, especially for Infinity War and Endgame? Do you know all the story beats ahead of time?

Silvestri: Yeah, I actually do. I actually know everything, and I have everything as it’s being recorded. I have to be looking at the entire arc of the film all the time. Otherwise you really couldn’t have the kind of overview, a sensibility that the score has to really bring to the film.

Rotten Tomatoes: There’s an Endgame track called “The How Works” which I think is vital to the movie: It plays as the movie sells to the audience it’s going all-in on time travel. Then the song has a flute rendition of the Avengers theme. Then it goes into crime jazz, a heist theme. Are there any limitations on where you can go on these movies?

Silvestri: No, and I think that’s one of the fun parts of the letting the movie take you to where it wants to go. And it’s one of the nice things about having a simple, identifiable theme: It can be dressed in many, many different ways. And Marvel is known for having fun and for having humor in their films. And you used the word: heist. We just knew that we would have some fun with those traditional sounding, caper-type movies. And yet, our theme had to travel along with those kinds of settings. So we’re using bongo drums and flutes and triangles and all of these rhythms. And it’s kind of like a spy movie, but at the same time we have our Avengers theme being there. So we had a lot of fun.

Rotten Tomatoes: Due to the emotional nature of Endgame, there were a lot of soft moments: Tony floating in space, Cap seeing Peggy, or Tony giving Cap his shield back, which uses a reprise of The First Avenger theme. Did you find there were more opportunities for the music to breathe in Endgame compared to Infinity War or the other Avengers?

Silvestri: I think absolutely. I think that was really what Endgame was going to be about. It was going to be about resolution of 21 films worth of characters. It’s why the film was as long as it was. I think that the Russo brothers knew, and the writers knew, that it was going to take some time to resolve these relationships. Hawkeye and Natasha, Tony and Pepper… So there was a lot more air and a lot of these quiet scenes. Even with a scene like Thor and his mother. Just spectacular emotional moments. And so it was an opportunity, in what at face value would be considered a big action superhero film, to have a lot of quiet emotional places for music. And for the performances of the actors as well. 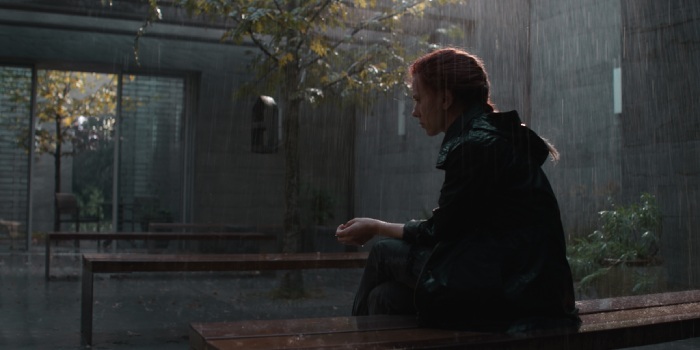 Rotten Tomatoes: Infinity War‘s fallen reappearing on the battlefield is going to be a defining image for a generation of moviegoers. How did you approach “Portals” for this?

Silvestri: “Portals” was one of those scenes that the filmmakers identified early on as being a key moment, and potentially an historic moment in the entire Marvel universe. There were a number of different approaches that we took. And it took us a little while get a sense of what was really happening there. Again, you have that temptation with the reveal of all of these magnificent historic Marvel characters, there’s this temptation to kind of become too segmented, and for every entrance to be doing something special and something different. And the more we worked on it and tried that actually, we saw that it just really wasn’t working. It needed to be seen with much more of an overview and much more of a celebratory and promising sensibility, [rather than], “Here’s this one and here’s this one, and now this one.” The audience understands that.

But the overriding emotion is, “Look what’s happening. They’re all coming, we’re seeing them all, they’re all coming back. They’ve all come back to life.” So it wound up with much more of an overview. And then [we used a] new theme there because there was really nothing else that was gonna really take care of it. And it’s one of those pieces where it’s the same theme repeated a number of times, keys changing, getting bigger and more grand. And we knew that at the end of all this, we had to really set up the original Avengers theme after Cap delivers that amazing “Avengers assemble” line, which he almost whispers. Then we come in full bore with the original Avengers theme when the charge begins. So it took a while for us to find what would be the most satisfying approach. And I think we finally arrived at something that’s working pretty well.

Rotten Tomatoes: Do you have a favorite musical moment from Endgame?

Silvestri: Well, I think that that almost falls into the category of which is your favorite child. It was interesting when I was early on working on the film. There’s the end of the film when Tony has left us and we have now maybe five or six minutes, with basically everyone who’s been in the Marvel films attending the ceremony. That was a very challenging place, wondering what am I going to do for that. It needed to have a sense of reverence, a sense of gravity, yet it had to have a sense of beauty and promise and resolution. It was almost too terrifying to go there and work on it. I was working on the cue in the beginning of the film when Tony’s stranded in space and finishes his message to Pepper. He puts his jacket on and he lies down, and there’s just a very kind of simple, electronic, single instrument playing this theme that carries us from there, through Tony being put in the chair by Nebula. 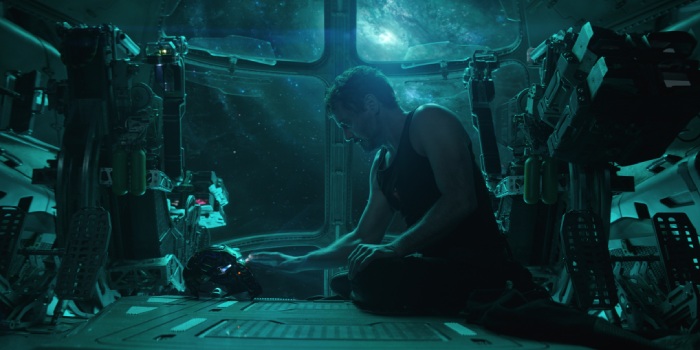 Rotten Tomatoes: Before we go, I have to tell you: Even before I knew I was doing this interview, I re-watched Flight of the Navigator a few days ago.

Rotten Tomatoes: It made me realize your theme was the first piece of music I connected with on an emotional level. I must’ve been 6 or 7. Thank you for that. Do you have any particular memories or stories from that movie?

Silvestri: I remember I did that all electronically. And that I think was really driven by the budget for the the film. And I just have to say it’s wonderful for you to say nice things about that, because every time I do a film I try to do the best I can. And I’ve done a tremendous range of films and some people would say, “Well, that wasn’t the best film you ever did,” and “Why did you do that?” and “Why did you do this film?” Clearly, Flight of the Navigator was a well-made film. But it was not a big budget film. It was very sweet, charming. I can only say I’m trying to do the same job there as I was trying to do on Endgame, from the point of view of doing the best I can with what I’m doing today.

Avengers: Endgame is in theaters now.