Army of the Dead First Reviews: It Won't Win Over Any Zack Snyder Skeptics, but It's Pure Zombie Fun

Critics say Snyder's return to his zombie roots is a little messy and a tad overlong, but it's packed with fun characters and plenty of zombie carnage.

Following the recent success of his recut of Justice League, the rebound of Zack Snyder continues with Army of the Dead, a Las Vegas-set zombie movie crossed with a heist film that hits theaters on Friday, May 14, and then Netflix one week later. It’s also a return to a specific kind of feature that kickstarted his directorial career, calling to mind his 2004 debut with the Dawn of the Dead remake. The first reviews of Army of the Dead lean positive with appreciation for the usual Snyder visual flair and dependable zombie carnage, even if the story isn’t tight enough.

Here’s what critics are saying about Army of the Dead:

The film is a triumph for a director whose career has been mired by polarizing opinions… If this is what Snyder looks like without studio control, please, sir, may we have some more?
– Charlie Ridgeley, ComicBook.com

It’s refreshing to see Snyder reignite his first love with this romp of a genre mash-up that lets Snyder loose with his most gleeful indulgences, almost as much as his worst excesses.
– John Nugent, Empire Magazine

Never have the Snyderisms come so relentlessly, and never have they felt more welcome.
– Bilge Ebiri, New York Magazine/Vulture

What if you’re not typically a Snyder fan?

Will Army of the Dead change the minds of Snyder critics? Probably not. But for Snyder fans and anybody in the mood for bloodthirsty zombie action, the movie hits the jackpot.
– Ian Sandwell, Digital Spy

Snyder’s army of fans will devour it whole; others might find it by turns bland and flavorsome, and will certainly experience some bloating.
– Jamie Graham, Total Film

The whole thing is a blast that hooked even this Snyder skeptic.
– David Rooney, Hollywood Reporter 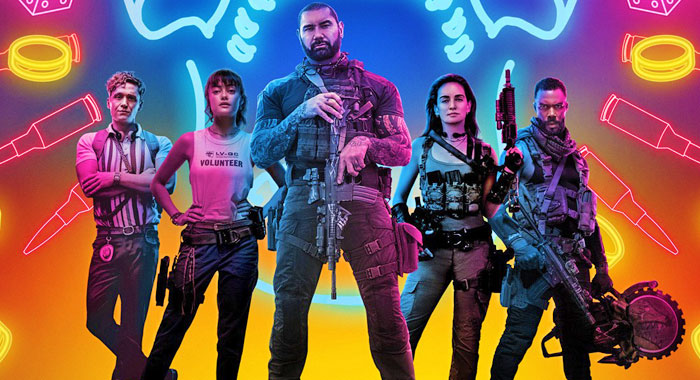 How does it compare to Dawn of the Dead?

[It’s not] on par with his unassailable, killer remake Dawn of the Dead, but it’s entertaining enough.
– Courtney Howard, Fresh Fiction

It feels like Snyder is doing exactly what he wants, and that early 2004 promise comes right back into focus.
– John Nugent, Empire Magazine

Dawn of the Dead had real stakes, honest performances… Such camaraderie, sense of discovery and community is missing in his latest return to zombie cinema.
– Nate Adams, The Only Critic

Will it please zombie movie fans?

It’s the best video game movie zombie movie I’ve ever seen.
– Kate Sánchez, But Why Tho? A Geek Community

There’s enough gore, mayhem, and decay in Army of the Dead to make for a satisfying zombie-movie experience.
– Alonso Duralde, The Wrap

We get a zombie king, and a zombie queen. There’s a zombie tiger. A zombie horse. Even a zombie baby. These details should seem fresh, but they get lost in all of the mayhem.
– Chris Evangelista, Slashfilm

There is something weirdly and oppressively uninspired in this CGI world, a continuous two-and-a-half hour splurge of generic zombie content which itself feels a bit zombie-ish.
– Peter Bradshaw, Guardian

Army of the Dead is by no means a must-watch zombie or heist movie, and folks uninterested in this film would be fine to skip it.
– Molly Freeman, Screen Rant 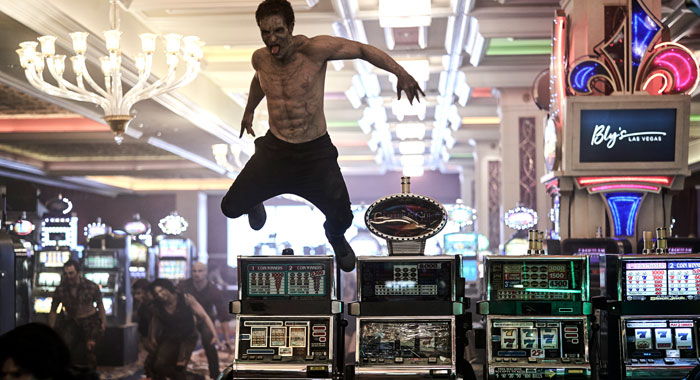 The movie always looks terrific with Snyder acting as the cinematographer too, so you can’t question that you’re getting the full Snyder experience.
– Ian Sandwell, Digital Spy

Snyder is best known for his stunning visuals and his technical mastery is on full display in Army of the Dead. The fact that he shot the film himself in addition to directing is beyond impressive.
– Charlie Ridgeley, ComicBook.com

Visually, the set pieces are fantastic to look at, and there are individual moments of splendor but nothing which stood out.
– Dewey Singleton, AwardsWatch

Snyder stages long stretches of Army of the Dead like a video game, with our characters moving down hallways and wordlessly blowing away zombies. These are technically action scenes, but there’s no grace; no style. Not even a blunt realness.
– Chris Evangelista, Slashfilm

How is the ensemble cast?

Omari Hardwick and Matthias Schweighöfer [are] the clear-cut standouts. Their chemistry is off the charts and they bring the biggest laughs, as well as the heaviest emotional punches.
– Charlie Ridgeley, ComicBook.com

[Tig] Notoro is the biggest standout of the cast insofar as she’s the only one having fun with the material.
– Molly Freeman, Screen Rant 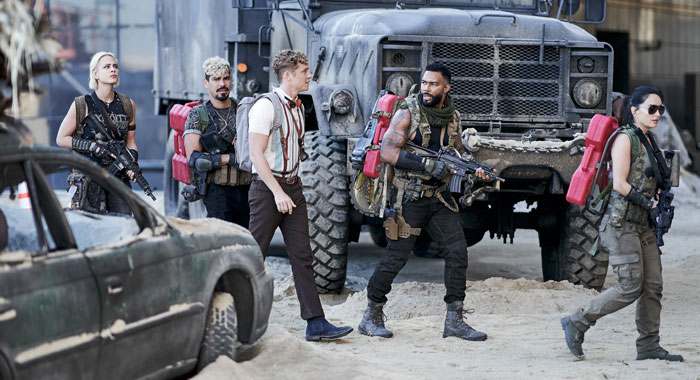 Is the portrayal of women problematic?

The film’s portrayal and desecration of women’s bodies in particular is incredibly frustrating… Even in their destruction, women exist solely to serve men.
– Molly Freeman, Screen Rant

There are times when Army of the Dead feels mean-spirited. It’s not helped that most of these moments involve the female characters, where the male characters get the larger share of Heroic Sacrifice moments.
– Ian Sandwell, Digital Spy

Stop and think too hard and Army of the Dead risks falling apart, but Snyder keeps a pace in which logic often feels like a lost cause.
– Eric Kohn, IndieWire

Though Snyder, Hatten and Harold attempt to complicate the plot of the movie by including various twists, most of them are trite variations on old standbys.
– Molly Freeman, Screen Rant

The overly-convoluted plot tends to be its own worst enemy at times, leading to a perceptible imbalance.
– Courtney Howard, Fresh Fiction

Several subplots and red herrings exist to inflate an already elongated runtime, when all I wanted was Ocean’s 11 with zombies.
– Nate Adams, The Only Critic

What about the pacing and runtime?

Almost breezy, even at a characteristically extended 2 1/2 hours…This is a long movie, but it doesn’t feel long. It moves.
– A.A. Dowd, AV Club

It’s all very exhausting, and at 148 minutes, Army of the Dead more than overstays its welcome.
– Chris Evangelista, Slashfilm

It’s overlong and labored in places, but worth a bite for the money-shot set-pieces.
– Jamie Graham, Total Film 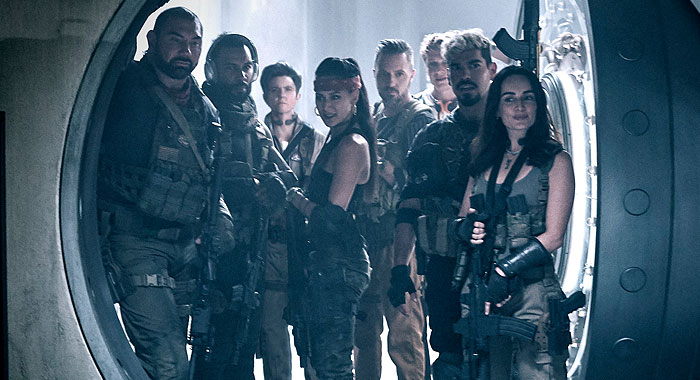 Is there the typical zombie movie social commentary?

If you are aiming to make a statement then mere glancing in the direction of social injustice isn’t going to cut it.
– Hannah Strong, Little White Lies

Snyder’s zombies might think and run to shake things up, but they aren’t placeholders for anything other than the scary-fun of watching their mangled corpses wreak gory havoc.
– Eric Kohn, IndieWire

That the film doesn’t belabor or over-stress its political conscience is vintage Romero, in the best sense.
– A.A. Dowd, AV Club

Is this just a fun time at the movies?

Army Of The Dead is best when Snyder leans into the fun, and allows himself moments of pure silliness.
– John Nugent, Empire Magazine

Army of the Dead is a wild ride of a film… a good time at the movies.
– Aaron Neuwirth, We Live Entertainment

Army of the Dead — which, let me reiterate, is a Vegas heist flick set during a zombie apocalypse — should be a lot more fun than it is.
– Bilge Ebiri, New York Magazine/Vulture 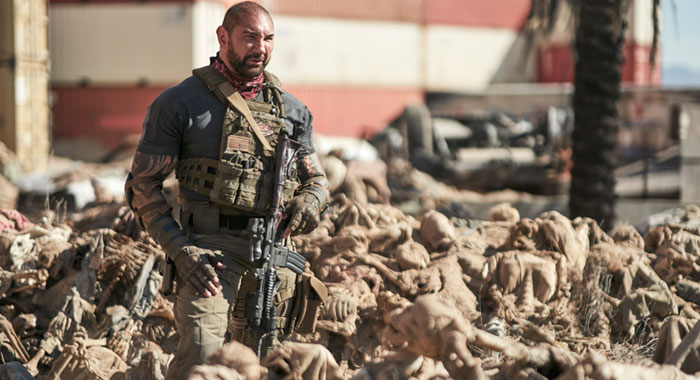 How does the film’s surprising sweetness play?

When he aims for more emotional territory we start to feel the weight of that running time.
– John Nugent, Empire Magazine

Tonally, the film is all over the place. At different points, Army of the Dead is all heart while others it is pessimistic and bleak.
– Dewey Singleton, AwardsWatch

Will this leave us wanting more?

Army of the Dead is too long while still leaving much unexplained – animated series Army of the Dead: Lost Vegas and prequel movie Army of Thieves will take care of that.
– Jamie Graham, Total Film

It represents a wider problem with modern blockbuster filmmaking – to fully understand one film you have to watch a litany of adjacent films and TV crossovers.
– Hannah Strong, Little White Lies

Whether or not Army of the Dead spawns an actual sequel, somehow it’s just not that exciting of a prospect. You kind of already know where it’s going to go, what notes it’s going to hit.
– K. Austin Collins, Rolling Stone