Taking cues from the popular film genre, the AMC series tackles kaidan – think: The Ring and The Grudge – in season 2 with the story of an “insatiable” ghost.

Season 1 of AMC horror anthology series The Terror took viewers north to the Arctic in the mid-1800s and stranded them there along with a starving, desperate expedition crew that was slowly descending into madness and a ferocious, definitely-not-a-bear creature that tore at survivors bit by terrifying bit. The season – which starred Jared Harris, Tobias Menzies, and Ciarán Hinds as officers on the doomed expedition – has a 93% Certified Fresh Tomatometer score, was hugely popular with Rotten Tomatoes visitors, and seemingly grew its audience through strong word of mouth.

“I like to joke, ‘If you loved season 1, you’ll get none of it in season 2,” season 2 showrunner Alexander Woo told Rotten Tomatoes ahead of The Terror: Infamy premiere.

This time, the setting mostly sticks to U.S. soil, but rather than a giant, bounding beast of teeth, claws, and fur, the new season takes a more subdued tack; its terror comes in the form of a haunting.

“The yūrei is very specific. It’s the thing crawling out the television set in The Ring. It’s the spirit of a dead person – usually, in the folklore, a woman who has been wronged in life and has come back with this insatiable rage, this all-consuming hunger that cannot be – it is literally impossible to quench,” Woo explained. 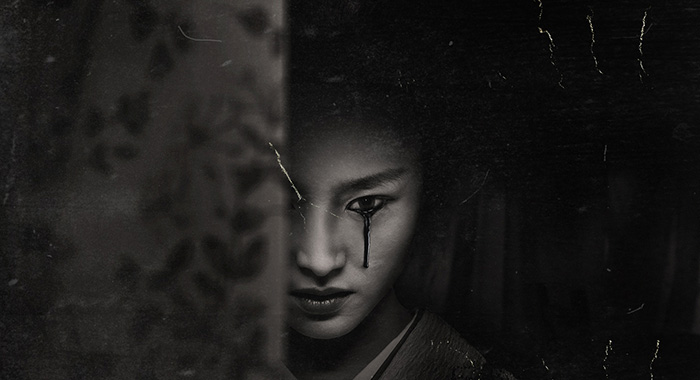 The spirit of season 2 then lies in the genre of kaidan, old-fashioned Japanese ghost stories, which U.S. audiences have not seen much of on TV, aside from genre films playing on cable or on streaming services or in Japanese series available online.

This story starts at Terminal Island, between San Pedro and Long Beach in California, ahead of the bombing of Pearl Harbor, and follows Japanese families into internment by the U.S. government during wartime. Woo and his team didn’t have a book to follow, as season 1 executive producers David Kajganich and Soo Hugh did in adapting Dan Simmons’ 2007 fictionalized account of the doomed Arctic expedition, but were able to research eyewitness accounts from about 125,000 internment camp survivors from archives and organizations, like the Japanese American National Museum and Densho at Heart Mountain, which was one of the camps. The goal was to recreate the world of the internment camps.

“We were the beneficiaries of some real, real geniuses on the show who built a world out of Vancouver, which is not a small task. Vancouver’s a very modern city. It doesn’t look like 1940s anything. To create not only a period world which spans two continents, and many, many states, it is no small feat,” Woo said. “To do it in a way that doesn’t fall into those images you get in your mind of World War II period pieces — it’s drab, you know? I didn’t want it to feel drab. I wanted it to feel very present, and very alive. They created a visual signature with this piece. John Conroy and Barry Dunleavy, our cinematographers, created this really gorgeous cinematic visual style that was really lush, and moody, and atmospheric.

“Then, Jonathan McKinstry, our production designer, went into painstaking detail to recreate the world from archival photos. So much so that when George Takei walked into our set, he said, ‘This is exactly how I remember it, with one exception.’ With the exception of some plates that we had, which were not chipped enough. We went and chipped them up so they would look a little more worn,” Woo recalled. 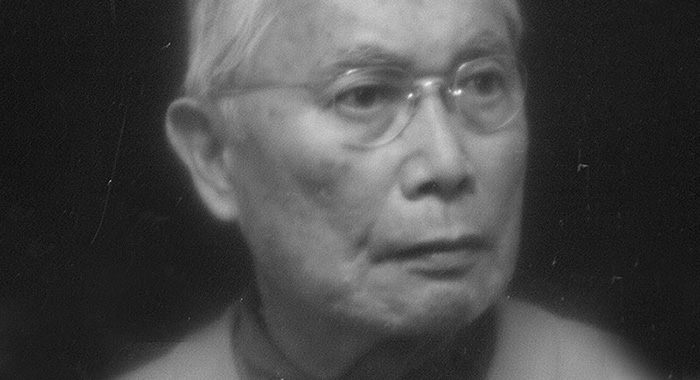 Takei plays Yamato-san, an 80-year-old living on Terminal Island who warns members of the younger generations of the danger of the yūrei.

“Early on in the season, the characters use a bunch of different terms because they’re not entirely sure what it is.,” Woo said. “Early on they use terms like ‘obake,’ which is a term for a spirit, which is kind of neutral. It could be even benevolent. It could be benevolent, or malevolent. Then, they use the term ‘bakemono’ a little later on, which refers to something a little more malevolent.”

Infamy’s story focuses particularly on 22-year-old Chester Nakayama (Derek Mio), who has dropped some of the elder generations’ cultural observances – like believing in yūrei – for his own American experience, including dreams of becoming a Life magazine photographer and a relationship with Mexican-American Luz Ojeda (Cristina Rodlo).

“The genesis of this comes from my co-creator Max Borenstein, who had actually heard George Takei give a talk 20 years ago, and was inspired to pitch this idea to AMC of telling an internment story through this genre lens, and specifically using the kaidan – or Japanese folk tales/Japanese ghost stories – at the center of it, and that would be the genre component of it,” Woo related. 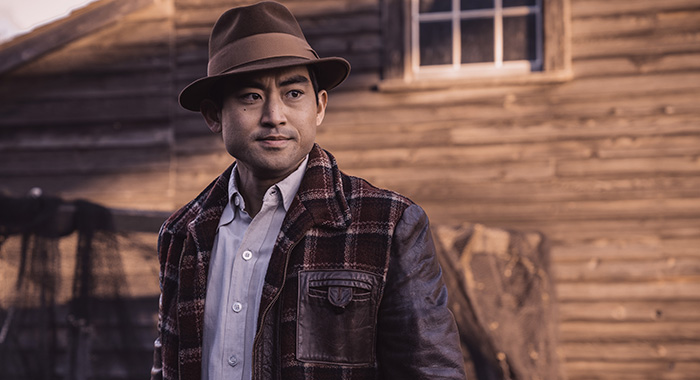 Chester feels confined and complains early on that his parents moved from one island to a smaller island, but he thinks of himself as wholly American with access to all of America, Woo said.

“Chester is, for me, an illustration of what it’s like to embrace a country that doesn’t embrace you back, you know? As we find out in subsequent episodes, his Americanness is challenged,” Woo said. “And so the yūrei represents something that is organically part of the culture of his father’s generation, and he has to confront his own Japaneseness in order to deal with it. He has to accept it and then understand it and then find a way to confront it. And that’s why we felt that that was an appropriate angle into the supernatural part of the story.”

The series also stars Kiki Sukezane as Yuko Tanabe; Shingo Usami and Naoko Mori as Chester’s parents, Henry and Asako Nakayama; and Miki Ishikawa as Amy Yoshida. Casting was done in the U.S., Canada, and Tokyo, resulting in a cast made up of actors from Japan and those of Japanese ancestry.

“George is arguably the most notable living person who’s ever lived with the internment. He’s also a working actor in our business. It seems obvious, and natural for us to at least offer him a role in our show. He says he’s made it his life’s work. He’s declared this many times, that this is his life’s work: to bring awareness to this period in history because there’s so many lessons from that that could be taken from that to the present. To our delight, he agreed enthusiastically to be part of our show,” Woo said.

“The casting of the rest of the show was a monumental feat by our team of casting directors. We have Carrie Audino here in L.A., and she’s won Emmys for Mad Men and West Wing,” he said. “We had Yôko Narahashi in Tokyo, and we had the casting directors in Vancouver as well: Corinne Clark and Jen Page. That entire team scoured four continents to find the cast where — we’re very proud of this —every single Japanese and Japanese-American speaking role is portrayed by an actor of Japanese ancestry. The original idea behind that was, there’s a lot of Japanese focus in the show. Obviously, we need people who could speak the language. 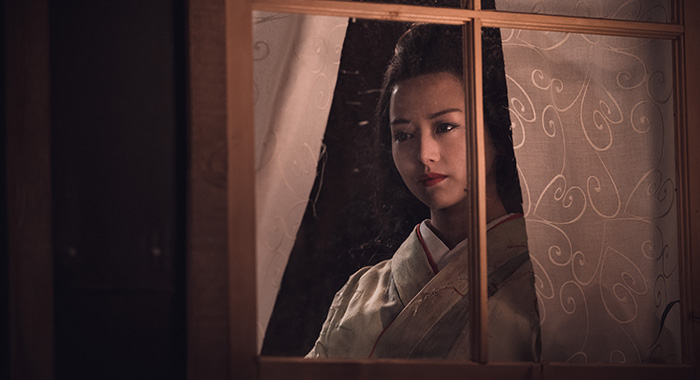 “As we were going through the casting process, we found that so many Japanese-American actors, or Japanese-Canadian actors, had such a personal connection to the internment, which is probably not surprising, because, if your family has been here since the ’40s, you lived through the internment [and/or] your family lived through the internment. So many people had such deep investment in it that we felt we should just cast wall-to-wall with actors of Japanese ancestry, because they brought such an investment to the material.”

Woo noted that he is himself of Chinese ancestry and feels connected to the heart of the story: the inevitable rift between a generation that immigrates to a new country that will perhaps never accept them, and their children born in that country who lose pieces of their cultural identity in their assimilation as naturalized citizens.

“There are resonances for almost anyone who has a generational connection to having an immigrant experience,” he said. “In this country, frankly, you don’t have to go very far back to get to an immigrant in anyone’s family. This story, as we came to explore and meet with people and talk with people, is the story of the Japanese-American people, but it’s not specifically exclusively a story for the Japanese-American people. There’re lessons from this that speak to anyone whose family has been touched or shaped by the immigrant experience, which really is just about everyone.” 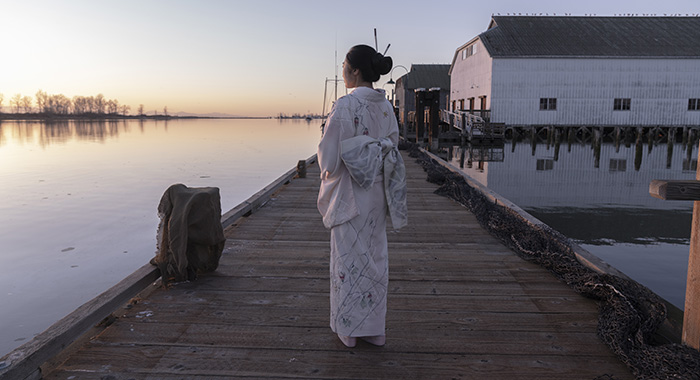 Production designer McKinstry returned to the series from season 1, but other contributors to season 2 are new, including co-costume designers J.R. Hawbaker and Tish Monaghan.

“The world really came to life in the costumes,“ Woo said, describing how Hawbaker met with Terminal Islanders and found archival photos of clothing worn during the period to help define each character over the course of several years. “[They] were able to build a world using both vintage pieces and pieces they created.

“The kimonos, specifically, which are incredibly labor intensive — it usually takes over a year to build a kimono, and we had to build several of them, and the multiple versions, because you need one for the double, you need one for the stunt person. They get dirty, they get bloody,” he said. “There were these fabrics that J.R. specifically found that had this shimmer to it, this ghostly shimmer to it, which it was really astonishing. … We had an entire kimono team … The kimono wrangler, the kimono designer, the people doing the dyeing. It was its own production; I don’t even remember how many people, but it was a large team just to deal with the kimono.”

Even with elaborate costuming and exacting production design from another time, Woo wanted the story to come alive for modern viewers.

“The idea of using a supernatural element to begin with, the idea was to use that genre toolbox as a way for the audience to access the emotions of the historical experience,” he said. “Because when you’re doing a period piece, there’s frequently a danger of it feeling like a museum piece, of feeling that you have to stay removed: It happened 75 years ago, and looking at it through glass, it’s encased in amber, and I feel safe from it. And we don’t want our audience to feel safe, we want them to feel what those characters are feeling, which was this constant, ambient dread and terror.”

The Terror: Infamy premieres Monday, August 12 at 9 p.m. on AMC.