"Patrick was really clear with us from the beginning; he did not want to repeat what he had already done," Kurtzman says. 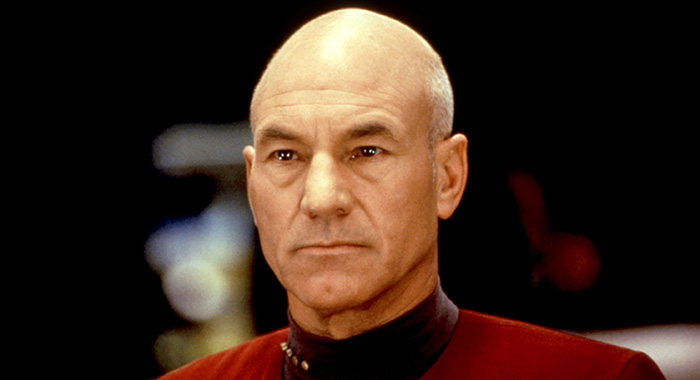 Scripts are now in the works for the new Star Trek series centered around franchise legend Jean-Luc Picard, the famous captain of the starship Enterprise in Star Trek: The Next Generation played by Patrick Stewart.

“Everybody in that room loves Jean-Luc Picard right now,” Star Trek TV universe mastermind Alex Kurtzman told a group of reporters following the Star Trek: Discovery panel during the Television Critic’s Association press tour. “And obviously, the benefit that we have is that Jean-Luc Picard is in the room with us. So as we’re breaking the story, we’re asking ourselves, how do we live up to the spirit, or compare with the tone, that Next Gen set to some of you, but also make it something very, very different? Patrick was really clear with us from the beginning; he did not want to repeat what he had already done. And, by the way, it’s been 20-plus years, so he couldn’t possibly be that same person on the bridge. And so the question becomes, what has happened to him over that period of time? Have there been occurrences that have force him to reckon with choices of his? … Those are the big questions that we’re asking.”

Kurtzman thrilled fans attending the 2018 Star Trek Convention back in August when he introduced a surprise guest and the lead for his next expansion series: Stewart. Announcing he would return as Picard, Stewart, who had been keeping busy more recently as Professor X in X-Men films, arrived on stage to rapturous applause.

“I have to tell you,” Stewart said in August. “He may not — and I stress ‘may not’ — be a captain anymore. He may not be the Jean-Luc that you recognize and know so well. It may be a very different individual; someone who has been changed by his experiences. Twenty years will have passed, which is more or less exactly the time between the very last movie, Nemesis, and today.”

Pultizer Prize–winning novelist Michael Chabon, author of The Adventures of Kavalier & Clay and Wonder Boys, is a writer on the new series.

“Everything in my life has been leading up to this,” Chabon told Deadline in November. “And I say that in all semi-seriousness.”

Kurtzman confirmed that Chabon is a huge fan of the franchise.

“It came about because he’s a crazy Star Trek fan,” Kurtzman said. “I mean, he knows absolutely everything there is to know and he happens to be one of the greatest novelists of all time. I am completely and totally obsessed with Kavalier & Clay. I read it on my honeymoon cover to cover, and I have not stopped talking about it since; and I’ve been married for almost 20 years. It’s very present for me still. So, the second I heard he was interested, I kind of stalked him. And to my great delight, found that he was actually — didn’t require any stalking — he was already in.

“I talk to him every day,” he continued. “I talk to him several times a day as we build this thing. His voice has been really critical. And he’s so brilliant, he’s so thoughtful, he truly understands the core of what Trek is, and what Picard and Next Generation is specifically.”

Star Trek: The Next Generation Flashback

Stewart is also playing a big role as a producer in shaping this bold new adventure into unexplored Trek future.

“Patrick didn’t want to put handcuffs on us in a way by saying … ‘I don’t wanna do this, and I don’t wanna do that,'” Kurtzman said. “He said, ‘I want you to have the freedom to explore this character from a new perspective, and I will always know in my gut if it feels like something he would or wouldn’t do.’ And that’s a conversation that we have as we’re building it scene-to-scene. We’ve started to internalize his thinking about Picard. And because that conversation is literally daily, either on email or in the room in person, I think we feel confident that we’re making choices that he would be happy with. And is happy with, because ultimately he’s a producer on the show too and he gets as much of a say.

“The first thing that we all said is it has to feel grounded,” he continued. “No matter what choices we’re making about portraying the future, it has to feel grounded. Because I think one of the things people have loved so much about Next Gen is that it is a very emotional, thoughtful, grounded piece of entertainment. The easy thing to do is come up with, you know, crazy floating skyscrapers and all the cliches of science-fiction, and we’ve tried to avoid that across the board. So, in the production design, in the look of it and in the feel of it, it’s always about the small, intimate, personal details that you can still connect to now even though it’s taking place so far in the future.”

Development is well underway with shooting, starting in April, occurring “in America,” Kurtzman said. Given his eight-month estimate for effects on an episode, the earliest the series might hit would be in early to mid-2020.

But Kurtzman wasn’t willing to give up all his secrets; he confirmed that the destruction of Romulus plays into the new Picard storyline, but when asked how, he replied, “No way.”