Alex Garland on Devs, Free Will, and Science Fiction Television

The Ex Machina director gives us a tour of his twisty new FX on Hulu series, starring Sonoya Mizuno and Nick Offerman.

When Devs debuts as part of FX on Hulu, it will introduce viewers to a bevy of science concepts like quantum computing and the deterministic model of the universe. It will also introduce a Silicon Valley where trade secrets are protected with ruthless efficiency. The program is the product of writer-director Alex Garland, who spent the last several years mapping out the limited series.

As the director of Certified Fresh films Ex Machina, which he also wrote, and Annihilation — to say nothing of his screenplays for films like Sunshine — Garland has emerged as one of the major voices of 21st century science fiction film (and now television). And even though our world increasingly resembles the one theorized by the major science fiction films of the 20th century, Garland told Rotten Tomatoes the role of science fiction is “exactly” the same in the hyper-connected world of 2020 as it was 40 years ago and even earlier. 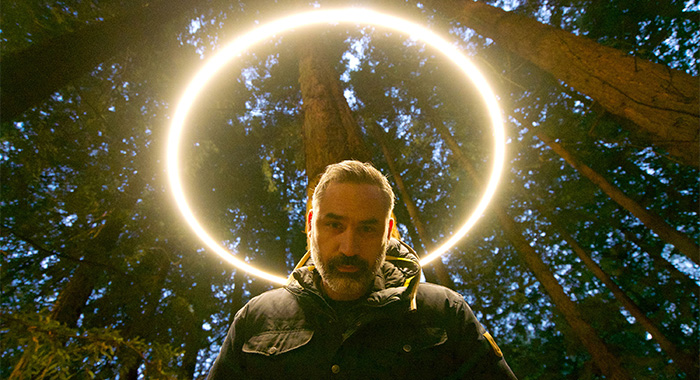 “It’s a very good, and actually quite comfortable, way of holding a mirror up to something which is contemporary. Because if you hold a mirror up exactly to the thing that is contemporary, people find themselves reacting to the argument that’s being made [as] they would if they were to find someone having argued about contemporary politics,” he said.

Where more direct critiques of current issues may bristle against a viewer or reader’s established views, science fiction still offers a “gentler way into that argument” whether it is The Time Machine’s critique of Victorian values, Star Trek’s use of aliens to discuss race relations or the way Devs looks at the billionaire class.

But do not expect the show to be a screed against tech giants who often seem to have more money than empathy. Instead, viewers will quickly find Forest (Nick Offerman) a disarming, human presence as he introduces Sergei (Karl Glusman) to the secretive Devs team within the show’s fictional tech company, Amaya. In fact, Garland said Offerman’s own natural warmth was key to making Forest work.

“He also has something else which is something soulful, I think. You could even in some ways describe it as melancholic,” he added.

Although, he said, that sense of melancholy was something Offerman found within Forest: “It felt like a perfect, natural fit. Nick is a kind man, and that kindness comes through in the character.”

Granted, as viewers will quickly see, Forest’s warmth is tinged with a willingness to protect the secret of Devs at any cost.

“And so, if you create a character who’s been extremely morally problematic and then you have a kind, and warm, and empathetic person carry that role, you get a sort of weird and interesting dissonance,” he said.

That dissonance will certainly form one of the questions viewers of Devs will be asking by the end of its first hour.

Another question to be asked: Is the universe deterministic? In that theory of existence, every action is prescribed, and a person’s choices are only an illusion. It is the model Forest himself espouses even as Sergei offers a multiversal answer — which allows for free will — to a problem his team addresses early in the series. Both concepts have been the playthings of science fiction for decades, but Devs makes them the purview of a tech company mindset that many will find quite familiar thanks to the ascent of Google and Apple. And though the ideas may become more approachable within the context of the series, Garland thinks most people react to the concepts in the same way.

“[They] actually find it, firstly, preposterous, and, secondly, unsettling. They don’t like the idea of multiple universes, because it stops them having primacy. What the Many-Worlds Theory really does, it says that each of the universes that exist — if they do exist — essentially has equal status to all of the other ones. So, there isn’t a main universe and then a bunch of branches, there’s just a very large number of coexisting universes. And people tend not to like theories that make them too small, I suppose.”

It is a reaction which speaks to one of the central conflicts in Devs: what Garland called “our intuitive sense in conflict with the data.”

“Quite aside from Many-Worlds, the data makes it very clear the universe is absolutely massive; close to unimaginably huge. And that’s now beyond any real doubt, because it could be proven in various sorts of ways,” he said. “And that is in conflict with people’s own experience of the world, where they are much more at the center of the universe and occupying quite a big space within the universe. You know, then [there’s] their family, their friends, their job, and, in a way, the more they lose proximity with these bonds, the smaller they feel.”

Nevertheless, Garland noted conversations moving from the possibility of a mulitverse where free will exists to a deterministic view where there is no choice elicits an equally strong emotional response.

“If I have a conversation with people about free will, nobody likes the idea that they don’t have it. And it is completely in contradiction with our own sense — ‘But I absolutely, definitely have free will. I can feel it now,’ [they say], which is… again, it’s what people feel, but it may not be supported by the data.”

That view, as espoused by Forest, leads Devs’ main character, Lily Chan (Sonoya Mizuno), onto her collision course with the warm and melancholy Amaya CEO. And while discussing Lilly’s actions would lead to a level of spoilers we definitely cannot reveal in this or any other reality, it did lead to another question the show presents: Do ethics exist in a deterministic universe?

“I don’t personally think it takes ethics and morality out of the conversation, I just think it means you react differently to the state of affairs,” Garland said. 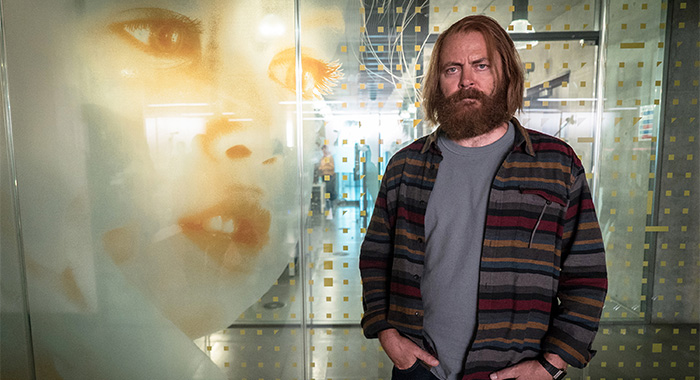 To illustrate morality in a deterministic universe, he used a 15-year-old boy mugging someone at knife point as an example. In a universe with free will, the boy’s punishment (provided he is caught) proceeds from the notion he is in absolute control of his choices.

“If you take deterministic view, you might say, ‘Well, hang on a minute. Because this kid is a crystal meth addict, and both his parents were crystal meth addicts, and he was addicted by the time he was 12, and he was trapped in a world that had given him a very distorted sense of ethics, and, as well as that, a sense of desperation, and no home, that led ultimately to the mugging.’ Under those circumstances, punishing the kid makes much less sense. Rehabilitating a kid makes much more sense.”

“What we do then is make sure that [the kid doesn’t] do it again,” Garland suggested. “So, that doesn’t remove the ethics, because you still don’t want the kid to mug anybody. It’s just more that you’re not punishing him for something that wasn’t his own decision.”

Of course, Garland was quick to point out that while his example leads to a morality with more empathy and compassion, it also suggests atrocities are also unavoidable in a deterministic universe. “I don’t think anybody wants to let Adolf Hitler off the hook in the way that you might let a 15-year-old off the hook,” he quipped.

Nonetheless, the morality of what Forest calls “tram lines” will no doubt feature in discussions of Devs when its full shape is revealed with the show’s finale six weeks from now.

Part of that shape, though, is the modernist, mid-20th-century-style Amaya campus, shot partially at UC Santa Cruz and the University of Manchester. The style branches out of the campus and into the way much of the series is shot. To Garland, that style is a great container for science fiction stories because of its “utilitarian” essence.

“By looking at the [modernist] structure, you understand something about why it was built and how it was built. It’s less concerned with the kind of a flamboyance that you might get in a Victorian or Edwardian period church, which is trying to proclaim something about itself, and is not exactly utilitarian. Or for that matter, elaborate science fiction citadels with gleaming spires or whatever it happens to be.” Instead, the modernist feel has “this sort of blunt quality that I like, it’s sort of arresting.”

While Devs represents Garland’s first television work, he said he would consider telling other science fiction stories in the film format.

“I personally cannot imagine how I would tell this particular story within two hours,” he said. “The things I wanted to do — or was hoping to do with the characters — and with the narrative, would have just felt incredibly crudely crunched together if it was two hours.” 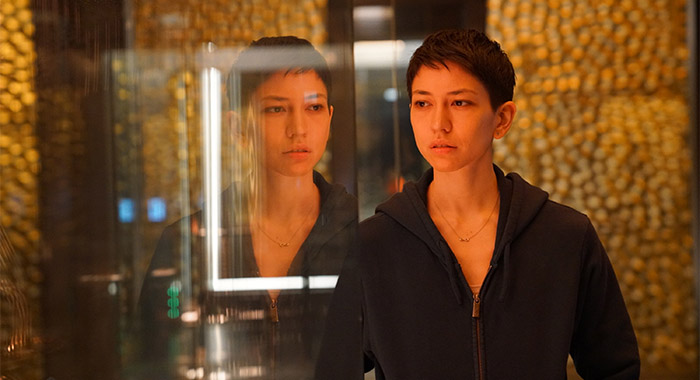 But, he added, “there are other spaces” film offers even if there is the implicit expectation of action.

“I think films often have to be a bit more ‘sugar rushing.’ Film is so much… I mean, it doesn’t have to be, but it tends to lean towards urgency and economy, and I guess that then leads people towards action sequences,” he explained.

For Devs, he needed television’s acceptance of people “talking in rooms” to fully realize characters like Lilly, Forest, and Kenton (Zach Grenier), Amaya’s dedicated chief of security, to his satisfaction. At the same time he agreed “there are so many great science fiction films” and an idea more suited to film could appear at any moment. “It would certainly depend on the narrative,” he added.

As for Devs narrative, Garland said he hoped to “give a very fair account of the world” within a science fiction context “by trying to be fair about the idea to do with physics that it contains, and also the way we interact with each other.” The series, in his mind, is really full of partnerships and “the sort of good people who love each other to one extent or another, as colleagues, or friends, or partners, or parents.”

“Its intention is not to be removed, its attempt is to be connected, and I hope that’s ultimately how it comes across,” he added.

For this writer, Devs definitely connected in no small part because of the weird synchronicity of sharing a last name with Forest’s company.

“It must be kind of weird to see that suddenly you’re the head of the corporation that does quantum computing,” Garland quipped when he noted the connection.

As it happens, the name was chosen because the girl who plays its enigmatic face is also named Amaya: Amaya Mizuno-Andre. Often Japanese in origin, the name also appears to enter the Romance languages from the Basque Country — though opinions do differ — where it translates from Euskera into English as “the beginning of the end” or simply “the end.”

“Oh my God, that is hilarious!” Garland said upon hearing about the Basque origin. “That was completely unintentional.”

Devs launches on Thursday, March 5 on FX on Hulu.