The 89th Oscars ceremony ending was a nail-biter — and social media ate it up. 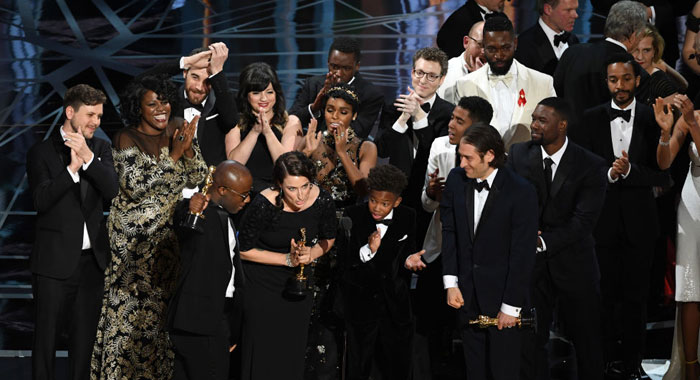 Little did we know when we started the night that we’d have such a dramatic upset at the end of Sunday’s 89th Academy Awards Ceremony.

Film critic and Rotten Tomatoes contributor Alonso Duralde summed it up for us in one tweet.

What happened: Film legends Warren Beatty and Faye Dunaway misread the winner of Best Picture, awarding the honor to La La Land when the actual winner was Moonlight.

Watch the epically cringe-worthy moment when the error was revealed:

WATCH: Moment where crew/cast of 'La La Land' realizes a mistake had been made and 'Moonlight' actually won Best Picture. #Oscars pic.twitter.com/WCCopwsJ66

Upon receiving the award, Moonlight director Barry Jenkins said: “Very clearly, very clearly, even in my dreams, this could not be true. But to hell with dreams. I’m done with it — because this is true! Oh, my goodness.”

I can't stop watching the end of the #Oscars on a loop. It's so amazing

So sad how the Russians hacked Warren Beatty.

So I'm at the LG party and that was awkward

Apparently, someone handed Beatty and Dunaway the envelope for Best Actress category, which was awarded earlier in the evening to La La Land leading lady Emma Stone.

Whoever handed Warren that envelope is leaving the country. #Oscars

The accounting firm in charge of counting ballots and distributing the envelopes, PricewaterhouseCoopers, issued a statement Monday apologizing for the snafu:

“We sincerely apologize to Moonlight, La La Land, Warren Beatty, Faye Dunaway, and Oscar viewers for the error that was made during the award announcement for Best Picture. The presenters had mistakenly been given the wrong category envelope and when discovered, was immediately corrected. We are currently investigating how this could have happened, and deeply regret that this occurred.

We appreciate the grace with which the nominees, the Academy, ABC, and Jimmy Kimmel handled the situation.”

I wrote the ending of the academy awards 2017. @jimmykimmel we really got them!

He wasn't even gonna read it y'all. Warren Beatty woke af.

This photo sums up the #Oscars perfectly. pic.twitter.com/XXuBkkGwbO

Aside from the responses to that historic — and insane — end to the Jimmy Kimmel–hosted Oscars show, have a look through some of the other great social responses of the night from stars, film community social accounts, the media, and others watching.

From Stars and Others in the Film Community

Sunny Pawar from Lion is the cutest kid ever! #Oscars #ERedCarpet

Congratulations & good luck to the 12 Canadian #Oscars nominees up for awards tonight. Your art & achievements make our country proud.

Congratulations @violadavis! Thank you so much for that speech. #Oscars

Nope you are right. I screamed and cried #Oscars #ViolaDavis @violadavis congratulations https://t.co/TwQnFpxEGh

One bad trend the past few years at the #oscars is for hollywood to bring in "regular" people to show how "down to earth" hollywood is.

No one's going after Trump. Like no one gives a shit about him & we've already forgotten him. This is what 2020 will be like. #Oscars

Viola Davis is now the FIRST Black actress to ever win the Oscar, the Emmy, and the Tony. #Oscars #FENCESMovie #MACRO pic.twitter.com/bf0XDbU9qh

Ruth Negga spiced up her @MaisonValentino gown with an @ACLU ribbon #Oscars ✊ pic.twitter.com/AReCE5Gc6E

When you know you got this. #Oscars pic.twitter.com/JYXK3xuTaC

I'm not sure why Halle Berry showed up to the #Oscars in your Grandma's shouting wig. I'm just mad someone told her it was okay.

#Hamilton's @Lin_Manuel is also wearing a blue @ACLU ribbon. He brought his mom to the #Oscars. pic.twitter.com/yHAxx5Htwt

Mel Gibson's reaction to Jimmy Kimmel's OJ joke at the #Oscars says it all… pic.twitter.com/5eK611ToC9

"O.j. — you get an extra slice of baloney tonight' — @jimmykimmel tells an OJ joke that falls flat after the documentary win #oscars

When you're the most charming person in the room, amirite? @TheRock #Oscars #IMDbLIVE pic.twitter.com/y9PHMsCabZ

Every year @kylebuchanan grows more correct:https://t.co/OGQIj4JWEi THE ROCK SHOULD HOST THE OSCARS

Nothing to see here, just @lin_manuel being a total rockstar at the #Oscars. pic.twitter.com/vSBhRwPXhR

She's 16 and singing at the #Oscars and @Lin_Manuel was basically her opening act https://t.co/rbnrLfc5JG #Moana pic.twitter.com/7SLfjmXg9f

Props to @auliicravalho-she took flag to the head & didn't miss beat while performing #Moana's How Far I'll Go at #Oscars . What a trouper!

Oh my, hearts melting with that smile. Such a beautiful performance. #Oscars #Moana pic.twitter.com/sXDjhJBWCi

but srsly imagine how great life would be if emergency snacks were parachuted down whenever you were hungry #Oscars pic.twitter.com/v97iVRp9vC

I love when they rain food down onto people who haven't eaten sugar in decades. #Oscars

After 3 losses so far at the #Oscars, 'La La Land' can no longer take the record of most Oscar wins https://t.co/GNy3fvT0BR pic.twitter.com/BvlSYD6km6

This supporting actress category is so stacked. JUST GIVE IT TO ALL OF THEM. #Oscars

"We are the only profession that celebrates what it means to live a life" – best supporting actress winner Viola Davis #Oscars pic.twitter.com/s6j7S2hFp9

.@violadavis gives tearful acceptance speech thanking her family: "I'm so glad that you are the foundation of my life." #Oscars pic.twitter.com/qpOrvXq4J0

Who's going to get @violadavis to do their audiobook so she can complete her EGOT next year? #Oscars

movie trivia: HACKSAW RIDGE was *also* based on a Walmart receipt. #Oscars

"Tolerance is more powerful than the fear of the other", say team behind winning animated feature Zootopia #Oscars pic.twitter.com/5eJWJ6htmJ

Asghar Farhadi, who did not attend the #Oscars, in a statement following his win for Best Foreign Language Film. https://t.co/C97WkobUQm pic.twitter.com/ZBIAvv38ms

"As a Mexican, Latin-American, migrant worker, human being, I'm against any form of wall that wants to separates us." –@GaelGarciaB #Oscars pic.twitter.com/arcg1dI4cj

Dakota Johnson and Jamie Dornan here to remind you movies are a business. #Oscars ???

Souvenirs these days are so fancy. #Oscars pic.twitter.com/hNKQc0GSIL

Anyone who enjoyed that bit never gets to complain about Letterman's #Oscars ever again.

This awful bit is going on for approximately a million years and yet actual winners are getting the music after 30 seconds? C'mon. #Oscars

Everybody wants to hug Meryl Streep. It's a universal law. #Oscars

Competitive Editing category — Hacksaw Ridge totally earns it in a degree-of-difficulty way, and those battle scenes are stunning #Oscars

Is this like the point on election night when that NYT pointer swung over to Trump’s side? #Oscars

? Nants ingonyamaaaaaa…. ? #Oscars We have a new winner for cutest moment of the night. pic.twitter.com/mgAK8TFW3U

Welp, @Sethrogen and @realmikefox just arrived from the future… or the past… ? #Oscars pic.twitter.com/vBhUeTGd4f

OK, if I'm being honest, this feels like it happened a few days ago, #Oscars…. pic.twitter.com/CsVgGORZpl

That dog does look like Tilda Swinton though. #Oscars

Too bad @Lin_Manuel didn't EGOT this year, but let's not pretend he won't be back in years to come #Oscars

"This is dedicated to all the kids who sing in the rain and all the moms who let them." #Oscars #LaLaLand pic.twitter.com/EPUWVmEhdJ

Smart move running a promo for FX's "Feud" during the #Oscars. Very few shows are that much of a promotional bull's-eye.

"All you people who feel like there's no mirror for you… we have your back… for the next 4 years we won't forget you." #Oscars pic.twitter.com/Ri5J8aUvey

Oh Captain, our Captain… Marvel, that is. @brielarson #Oscars pic.twitter.com/iHj1LVdHTt

Just going to close this envelope back up now. #Oscars pic.twitter.com/17ByGKKPWo

#KatherineJohnson on the #Oscars! What a wonderful moment. #HiddenFigures. Incredible life and great contributions to #space.

Tonight's #Oscars made history: #MahershalaAli became the first Muslim to win an Oscar for his role in Moonlight. https://t.co/AqcHsKNVYI

Salma Hayek is right: It's our job to challenge authority & stand up against racism, sexism, misogyny, homophobia & transphobia. #Oscars https://t.co/dNyJvnF4l1

UPDATE: This article was updated Monday with the statement released by PricewaterhouseCoopers.