AAPI Stars Name the TV Shows That Inspire Them

The Mindy Project, Fresh Off the Boat, and Killing Eve are just a few of the most influential TV series for Asian-American and Pacific Islander creatives working today.

To close out Asian American and Pacific Islander Heritage Month, we’re celebrating shows and characters that have inspired some of our favorite AAPI creatives working today. We asked the talent behind some of TV’s top series — Nelson Cragg of Amazon horror anthology Them, Joy Osmanski of Fox’s animated comedy Duncanville and The CW superhero drama Stargirl, and more — about the most influential, favorite, or meaningful television series in their lives.

Some of the shows on the list center Asian stories in a way they haven’t been seen on television in the past, some star Asian actors in prominent roles, and some are just plain entertaining and relatable and inspired younger actors to pursue their dreams. Read on for a hand-picked selection of TV (perfect for a marathon) so you can celebrate AAPI talent all year long.

Nelson Cragg, executive producer, director and Emmy-winning cinematographer (Amazon’s Them and Netflix’s Ratched): Killing Eve is such an incredible show. Seeing a Korean woman star in such a powerful piece is inspiring. And it isn’t a show about being Asian. It is just a great role for a great actor. I hope in the future Asian leads will be cast in a broader range of roles in tv and film of all types!

Josh Dela Cruz, Broadway actor and host of Nickelodeon’s Blue’s Clues & You!: Killing Eve is amazing. Sandra Oh’s portrayal of the immensely intelligent and complicated Eve is a far departure from the stereotypical Asian characters depicted on screen when I was growing up. The only thing I don’t like about it is the fact I have to wait for the next season!!!!

Joy Osmanski, actor (Duncanville, Stargirl): I remember how excited I was when Mindy Kaling’s show first started — I had loved her acting and writing on The Office and was thrilled she got to create all these stories centered around a character who was funny, flawed and just fun to watch. Seeing her face week after week and watching her navigating the complexities of running a show really inspired me. 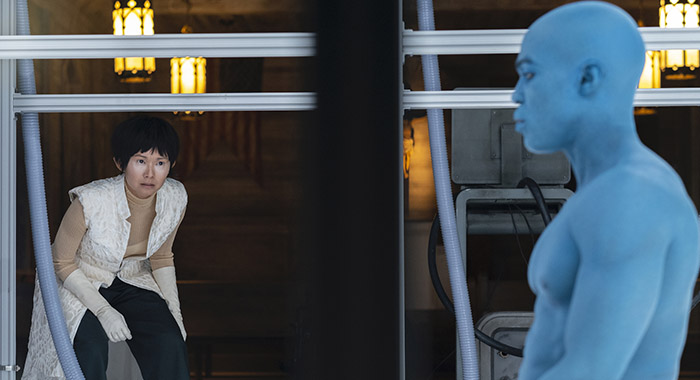 Stephen Oyoung, actor (Good Trouble, Jupiter’s Legacy): I was blown away by Hong Chau’s performance as Lady Trieu. At first she’s just totally odd, mysterious, but then she morphs into this charismatic and sometimes hilarious villain? Protagonist? Antihero? All of the above! Like everything else in the show, you never know what she’s going to do next, but it all leads to fantastic payoffs.

Dela Cruz: Fresh Off the Boat is one of my favorite television shows of all time. It’s one of the first shows I’ve seen that closely resembles my experience growing up as one of the few Asian kids in my town. Not to mention the incredible cast. It’s so dang funny. 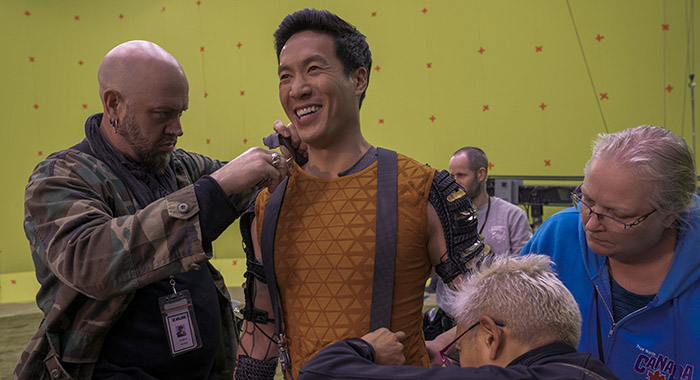 Oyoung: This was a great opportunity to bring together my background in martial arts, stunts, and acting into one role as Tectonic. I’ve portrayed my share of serious comic book villains, so I was excited to play the goodhearted superhero and wise-cracking best friend.

Sway Bhatia, actor (The Mighty Ducks: Gamechangers, Succession): I admire Stranger Things, from the acting to the writing and the special effects. I’m so inspired by the work created collectively by the cast and crew because it’s challenging having to imagine being in the Upside Down. The entire cast seems to have such great chemistry and I love Millie Bobby Brown and Noah Schnapp’s work on this show. They have taught me so much when it comes to acting and they seem relatable on and off camera. The writing and directing combined make for a great series, and one day I hope to work on the other side of the camera and make people feel engaged the way I feel when watching Stranger Things. Now I can’t wait to see season 4! “He’s coming…”

100% Kipo and the Age of Wonderbeasts

Osmanski: This is a show that reaches all ages — in our family, my 4- and 5-year-olds love it, as does my 20-year-old stepkid (who introduced us to it), and my husband. The soundtrack is fantastic, and the fact that the main character is biracial Korean and Black really speaks to me and my family. It’s an incredible show with some pretty big themes. If I’d seen this show as a kid, it would have blown my mind.

Alexander Woo (The Terror: Infamy showrunner): How can you not love Aggretsuko for its bonkers sensibility? But what’s maybe even more fascinating is how you can watch it with the English voice actors or in Japanese with subtitles and come away with a totally different experience. I can’t decide which I prefer. Either way, please check it out. After the past year, it’s not hard to relate to the lead character’s rage.

Ly: Daniel Wu is such a badass and the martial arts and stunts were so insanely innovative. They never got the recognition they deserved.

Ly: Not just a fun stylish entertaining show, but it’s really about something deeper. Much respect for the nuanced ways the show elucidates mental disease. Greta Lee’s delivery of “Sweet Birthday Baby” should have its own cottage industry of memes, ringtones and merch.

Ly: I love the parents and family in this show. Aziz’s parents are so charming. And the Thanksgiving episode is one of my favorite episodes of all time.

Ly: Vanishing Son was a mid 1990’s obsession for me, mostly because it was the only place I could find Asian American actors on screen. There were four m-o-ws and one season of TV. It starred Russel Wong as a man who escaped China after a political protest. (Not enough depictions of Asian protestors on screen.) And it also starred the beloved Cambodian actor Haing S. Ngor. There was even a storyline that took place in the world of Vietnamese fishermen (guest starring Dustin Nguyen) in New Orleans and their struggles with racism. It was really the first time I’d seen Vietnamese Americans on a TV show and it had a lasting impact on me.