A Wizard of Oz Remake Is In the Works, and More Movie News

This week’s Ketchup brings you more headlines from the world of film development news, covering such titles as Blade the Vampire Slayer, Captain Marvel 2, and Face/Off.

A WIZARD OF OZ REMAKE IS IN THE WORKS 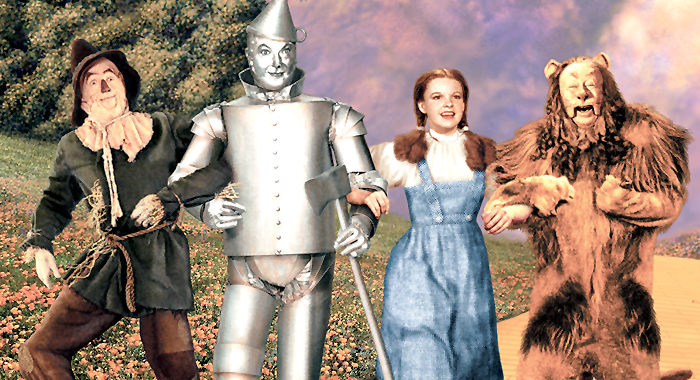 Although the Oz books by author L. Frank Baum are well known, one could argue that the 1939 movie The Wizard of Oz left such a strong legacy that it kept the number of later Oz movies to a relative minimum, including The Wiz (Rotten at 42%), Return to Oz (Rotten at 53%), and 2013’s Oz the Great and Powerful (Rotten at 57%). With this week’s news, however, there are now three major productions in development based on or inspired by those books. Just last week, the Wicked movie (based on the stage musical prequel) received a breath of fresh air in the form of Crazy Rich Asians director Jon M. Chu, who joined the project. And then, this week, the animated adaptation of the spin-off book Toto: The Dog-Gone Amazing Story of the Wizard of Oz made its next step toward production via a new deal between Warner Bros. and the animation studio Animal Logic. As big of a deal as both Wicked and Toto might potentially be, however, the third project announced this week has the potential to be the biggest, as New Line Cinema is now developing a new adaptation of L. Frank Baum’s original novel The Wonderful Wizard of Oz, which was the direct inspiration for the classic 1939 film The Wizard of Oz. New Line has hired director Nicole Kassell (The Woodsman, Certified Fresh at 88%) to start development on the film, which unlike other adaptations can use elements from the 1939 movie, like the ruby slippers. Kassell also recently directed three episodes of HBO’s Watchmen.

Sandra Bullock and Brad Pitt have been two of Hollywood’s biggest stars since the 1990s, but they’ve never appeard together in the same movie. As of this week, that’s about to change, as Bullock has joined the ensemble cast of the action movie Bullet Train, alongside Brad Pitt, Zazie Beetz (Deadpool 2), Aaron Taylor Johnson (Avengers: Age of Ultron), Michael Shannon, Brian Tyree Henry, Joey King, Logan Lerman, and Masi Oka. David Leitch (Atomic Blonde, Deadpool 2, Fast & Furious Presents: Hobbs & Shaw) is directing Bullet Train from a screenplay by Zak Olkewicz (in what may be his first released film) adapted from the novel Maria Beetle by Japanese author Kōtarō Isaka, which tells the story of five assassins aboard a bullet train in Japan who discover that their targets are all related. Although Pitt is expected to be one of the assassins, it’s not yet clear if Sandra Bullock is playing one, too.

The Marvel Cinematic Universe occasionally recruits its villains from relative comic book obscurity. In addition to major villains like Thanos, Dormammu, Hela, The Red Skull, and Ultron, Guardians of the Galaxy Vol. 2 gave us Ayesha, and the various Black Order villains in Avengers: Infinity War weren’t even introduced in the comics until as recently as 2013. So, when an MCU villain is cast, but Marvel doesn’t say who it is, we’re left wondering if it’s someone iconic or someone even diehard comics fans might need to look up on a wiki site. That leads us to the news today that Velvet Buzzsaw co-star Zawe Ashton has been cast as the main villain in Captain Marvel 2 (keeping in mind, of course, that Marvel movies frequently have more than one villain). Ashton is joining a cast that already includes Brie Larson (obviously), Teyonah Parris (Monica Rambeau from WandaVision), and Iman Vellani (Kamala Khan from the upcoming Disney+ series Ms. Marvel). Captain Marvel 2 will be directed by Nia DaCosta, whose highly anticipated sequel Candyman (8/27/2021) is due out this year after a delay prompted by the COVID-19 pandemic. Marvel Studios currently has scheduled Captain Marvel 2 for release on November 11, 2022.

3. JACK BLACK WILL VOICE CLAPTRAP IN THE BORDERLANDS MOVIE

The Borderlands video game franchise is built around several characters who represent standard gaming tropes, but probably the most popular character in the games is the comedic robot NPC (non-player character) Claptrap. The first time we ever heard about casting for the Borderlands movie was in May of 2020, when Cate Blanchett started negotiations to play Lilith, the Siren, which established that the Borderlands movie is aiming for A-list stars. That was a trend we saw continue two weeks ago when Kevin Hart also joined the project as Roland, the Soldier. The third cast member to be announced was Jamie Lee Curtis (who also has two more Halloween movies coming in 2021 and 2022), who will play the scientist Dr. Tannis, another NPC in the games. That news was followed this week by the news that Jack Black will provide the voice of Claptrap, meaning that both characters cast this week aren’t any of the games’ playable characters. Like Blanchett, Jack Black previously worked with director Eli Roth on the kids movie The House with a Clock in its Walls (Fresh at  65%), and more recently, he co-starred alongside Hart in the sequel Jumanji: The Next Level.

One of the most surprising announcements at Marvel Studios’ San Diego Comic-Con presentation in 2019 was the news that the vampire hunter Blade would be rebooted for the MCU with two-time Academy Award winner Mahershala Ali attached to take over the role. This week, Blade took its next step forward by hiring screenwriter Stacy Osei-Kuffour, who previously worked on the HBO Max superhero show Watchmen. Blade does not yet have a director or a release date, but Kevin Feige confirmed in 2019 that it would be part of Marvel’s Phase 5 (we’re currently in Phase 4). According to The Hollywood Reporter, the title of the film will be Blade the Vampire Slayer (not to be confused with Buffy the Vampire Slayer). In somewhat related news, Hong Chau, who co-starred in Watchmen as the (borderline) antagonist Lady Trieu, has joined Brendan Fraser in The Whale, the next film from director Darren Aronofsky (The Wrestler, Black Swan), about a man who weighs over 600 pounds.

5. ELISABETH MOSS JOINS MOVIE ABOUT THE MAKING OF THE GODFATHER

One of the projects that Armie Hammer’s dropped out of following his recent downfall was the Paramount+ series The Offer, about the behind-the-scenes drama behind the making of The Godfather (Certified Fresh at 98%). The true story of the making of The Godfather was to be both a series and a feature film, and Oscar Isaac and Jake Gyllenhaal have both been attached to star in the untitled feature film for a while now, as director Francis Ford Coppola and Paramount executive Robert Evans, respectively. This week, the film gained its third cast member, as Elisabeth Moss has joined the untitled project as Francis Ford Coppola’s wife, Eleanor Coppola, who later went on to have her own directorial career. Whatever it ends up being titled, this making-of-The-Godfather feature film will be directed by Barry Levinson, whose recent films The Wizard of Lies, and Paterno were also based on true stories.

Last year marked the 20th anniversary of the first live-action Dungeons & Dragons (Rotten at 10%), and about the fifth anniversary of the start of development on a new reboot of the franchise (not counting the two direct-to-video sequels to the 2000 version). In 2017, Dungeons & Dragons moved from Warner Bros. to Paramount Pictures, where the latter’s Star Trek star Chris Pine signed on in December. This week, Dungeons & Dragons signed two more stars, both of whom have had their biggest box office successes with Universal Pictures franchises. Fast and the Furious star Michelle Rodriguez and Justice Smith (Jurassic World: Fallen Kingdom, Detective Pikachu) have both signed on to co-star in Paramount’s reboot of Dungeons & Dragons, based on the popular role-playing game franchise. As with Chris Pine, the specifics about what sorts of characters they will play hasn’t been announced yet. Dungeons & Dragons (5/27/2022) will be directed for Paramount Pictures by the team of John Francis Daley and Jonathan Goldstein, who previously directed the Vacation reboot (Rotten at 27%) in 2015 and the much better received 2018 comedy Game Night (Certified Fresh at 85%).

7. ADAM WINGARD WILL DIRECT A REBOOT/SEQUEL OF FACE/OFF

It feels like decades now that Hollywood has been obsessed with rebooting, remaking, and reimagining the movies of the 1980s, but slowly, gradually, the focus is turning to the much-maligned decade of the 1990s. If one movie is an iconic example of the 1990s action movie, there’s a strong argument to be made for director John Woo’s 1997 film Face/Off (Certified Fresh at 92%), starring Nicolas Cage and John Travolta as two men on opposite sides of the law who literally exchange faces. Director Adam Wingard (The Guest, Blair Witch, Death Note) most recently directed the upcoming monster movie Godzilla vs Kong (3/31/2021), so he’s currently looking towards future projects, and one of them will be a reboot of the Face/Off franchise that will take the form of a sequel to the original film with a new cast. Of course, if any movie lends itself to being both remade and sequelized at the same time, it’s Face/Off, since the premise basically negates any continuity issues.

8. RUMOR CONTROL: SUPERMAN WON’T BE IN SHAZAM! FURY OF THE GODS AFTER ALL

After the DC Comics movie Shazam! (Certified Fresh at 90%) ended with a comedy beat featuring a body double as Superman, fans were probably not at all surprised by online speculation and rumors that Henry Cavill would be co-starring as the Man of Steel in the sequel Shazam! Fury of the Gods (6/2/2023). Well, Variety debunked that rumor this week, as the trade publication has confirmed that Henry Cavill will not be joining Zachary Levi and Asher Angel in Shazam! Fury of the Gods as Superman. Shazam! director David F. Sandberg also Tweeted recently that “halfway through shooting Shazam the plan was still for Cavill to be in it. Scoopers could have scooped that and been right at the time but wrong in the end.”

9. ANIMATION STUDIO BEHIND ICE AGE, RIO, AND THE PEANUTS MOVIE TO SHUT DOWN

Walt Disney Pictures was already a massive hive of competing subsidiaries (including both Pixar and Walt Disney Animation Studios) before the 2019 finalization of the acquisition of the various Fox TV and film properties. So, this week’s news is not particularly surprising, but it is still always sad to hear about the shutdown of a major employer, and for over 20 years, Blue Sky Studios was exactly that, with nearly 450 employees. Blue Sky released 13 animated feature films, including Ice Age and its four sequels, Rio (and Rio 2), Dr. Seuss’ Horton Hears a Who, The Peanuts Movie, and most recently and finally, Spies in Disguise. Specifically, the reason for Blue Sky shutting down is the COVID-19 pandemic. Although the Blue Sky library is still part of Disney, as are their intellectual properties, one project which will be canned is the animated adaptation of the Nimona webcomic by creator Noelle Stevenson, whose Lumberjanes was also at one point in development at 20th Century Fox as an animated feature. Nimona has previously been scheduled for release on January 14, 2022, and when it was cancelled, the film still had 10 months of production left.