The DC superhero shows on The CW have striven for diversity. After Arrow and The Flash, Supergirl broke the superhero glass ceiling. Arrow and the Flash have diverse and powerful allies, and Legends of Tomorrow assembled a diverse crew of time-traveling heroes, rotating in new ones each season. Now, Black Lightning is the first superhero series with a black lead and a predominantly black cast.

Cress Williams plays Jefferson Pierce, a father of daughters Anissa (Nafessa Williams) and Jennifer (China Anne McClain) and an ex-wife Lynn (Christine Adams). He’s the principal of Freeland High and, oh yeah, he used to be the superhero Black Lightning. In dealing with a drug gang called The 100 and police corruption, many Freelanders wonder where Black Lightning has been. They could use a spark of hope, and his lightning bolts wouldn’t hurt either.

Cress Williams spoke with Rotten Tomatoes about Black Lightning and shared nine electrifying things to know about the show.

1. HE CAN HOLD HIS OWN ALONGSIDE BLACK PANTHER 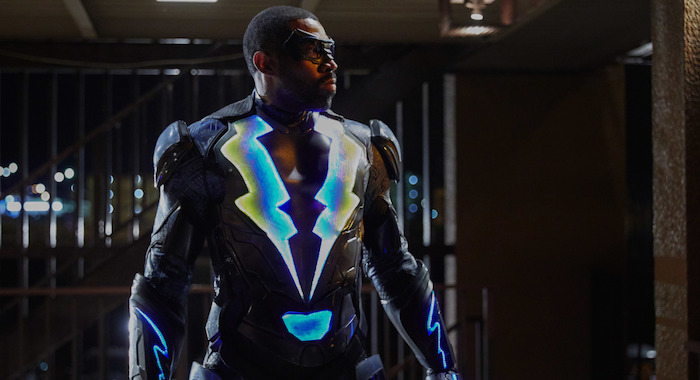 Black Lightning premieres this month and will still be airing when Marvel’s Black Panther hits theaters. Both are significant black superheroes; in fact, Black Panther was the first ever in print. But Williams doesn’t see Chadwick Boseman’s movie character as Black Lightning’s competition.

“It’s great that between the two of us, we’re creating the cinema as well as television,” Williams said.

All the other DC shows portrayed the origins of their characters. In Black Lightning, Freeland already knows who Black Lightning is. Spoiler alert: He’s coming out of retirement.

“It’s easier for me because I am the same age and physically going through the same thing that Jefferson/Black Lightning are going through,” Williams said. “Also as a fan, I love the whole genre. I love that we get to tell another side of it and not do the origin story.”

Portraying present fathers has become an important TV theme. This Is Us star and recent Golden Globes winner Sterling K. Brown, for instance, has previously said it is important to counter the perception “that black men are absent when it comes to their families” and that his role does that, providing an uplifting father image that people can identify with “regardless of their race, creed, nationality.”

Black Lightning also does that. Jefferson Pierce will remain a present father even with his crime-fighting activities.

“I think he is a Renaissance man and juggles everything,” Williams said. “His dilemma is always keeping the secret from his family, because his daughters don’t know. He’s very active in their lives, and I love that portrayal.”

4. IT’S ABOUT HOW TO PROTEST 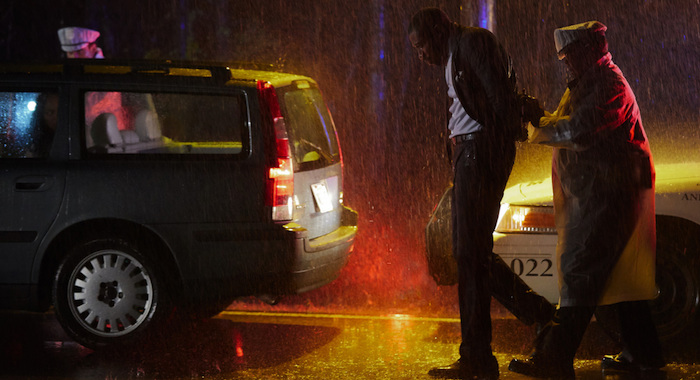 Black Lightning creators Salim and Mara Brock Akil wanted to use the superhero story to address issues facing real communities, and so, as a father, Jefferson Pierce wants his daughters to stay out of protests that could turn violent. As Black Lightning, however, he busts the heads of corrupt people oppressing Freeland. Both perspectives — nonviolent and violent — existing in the same character reflects a very topical issue.

“It’s kind of posing two ideals that some might say are like Malcolm [X] and Martin [Luther King],” Williams said. “The Jefferson Pierce ideal is you’re active in the community through education, through support. The Black Lightning perspective is you’re active through muscle and through force. I think the show hopefully will spark the debate over which is which. For me personally, I think ultimately it’s a balance of both.”

In real life, people can’t shoot lightning and throw bad guys around. Williams offered his thoughts on staying safe while being active.

“You have to be involved in the community,” Williams said. “You have to be involved in the issues, but you also have to protect yourself. I always think when he was the very age, specifically Anissa’s age, he was fired up in the way that she was. He probably had the same attitude. He’s wiser and he’s also protective. Nobody wants to see their children arrested or potentially abused or in danger. So he celebrates the spirit of what she’s doing, but he wants a little bit more savvy with what she’s doing.” 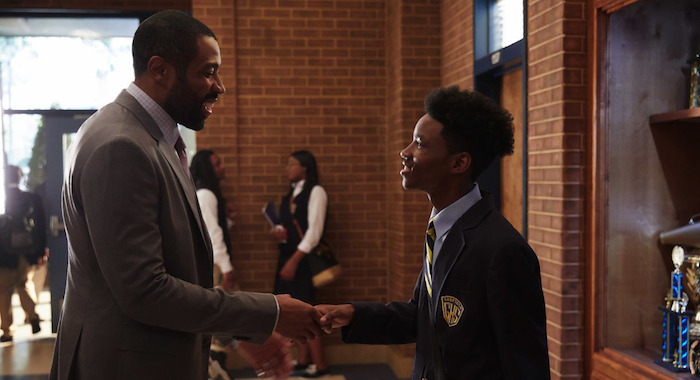 Fans may take Black Lightning home with them after they watch the show. What they may not know is they’re taking a little bit of the real Cress Williams along with him.

It’s not just Jefferson Pierce though; Cress Williams may be a real-life superhero too.

“Then there is a side of me that people refer to me as the Akita side,” Williams said. “If you know the dogs, Akitas, that is extremely protective. People say I’m laid-back and I tend to be a pretty laid-back person, but then there’s a switch that gets turned when I see something unfair happening; specifically with people that I love, I almost get blinders and just go into protection mode. All those aspects are in the character, I just identified with them.”

6. THE CLASSIC BLACK LIGHTNING SUIT IS STILL IN THE CLOSET

Black Lightning gets a new, modern costume from his mentor Peter Gambi (James Remar), but the classic spandex still makes an appearance on the show. A news report shows security camera footage of an old Black Lightning fight.

“That suit, we started with back during the pilot, and it most resembles the comic book,” Williams said. “It feels a bit nostalgic and it’s really old school. It’s more spandex and things like that. I’m a bit older, so it feels like I’m the superhero that I grew up with.”

You haven’t seen the last of classic Black Lightning either.

“We’ll do some flashbacks,” Williams said. “Not a ton, but we shot more in that suit than has been out there, so they might use that.” 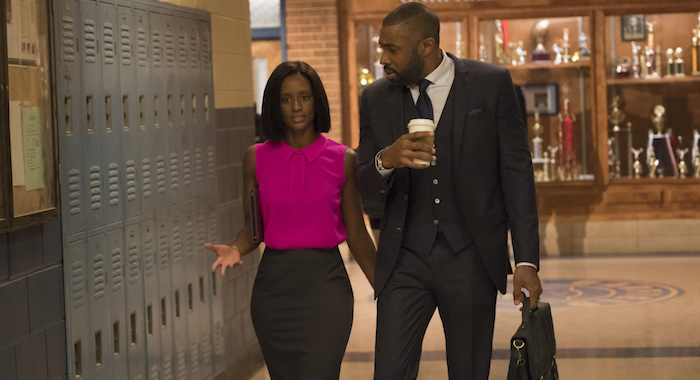 When it comes to the new suit, you’ve got high-tech glowing parts and what looks like a suit of armor. Yet Williams can walk around in it like he’s just taking the dog for a walk.

“It’s the strut,” Williams said. “You practice. I feel almost like I’ve been practicing my whole life. I’ve always wanted to be a superhero. The suit makes you feel larger than life so it’s pretty easy. With the new suit, it just feels like you want to go through walls. It’s exhilarating.”

8. JEFFERSON IS A STYLISH GUY 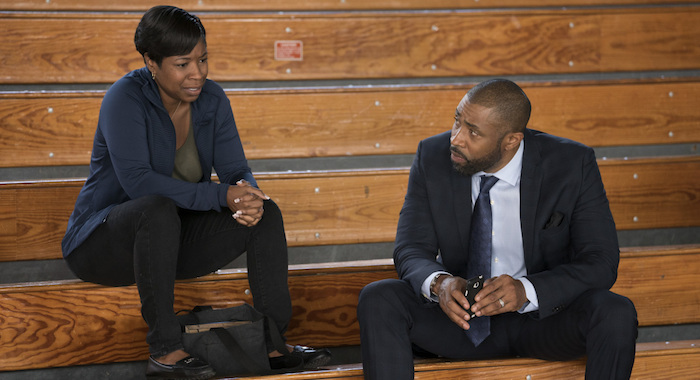 Jefferson’s wardrobe is pretty sweet. Even if he didn’t have the Black Lightning suit, he’d be the best-dressed man in Freeland.

“The joke on the set is they look at me when I’m in my principal gear, they’re like, ‘Wow, how do you afford these suits on a principal’s salary?’” Williams said. “For the longest time I didn’t have an answer. Then I realized Gambi, who’s like my surrogate, is a tailor. His tailor shop, if you look at the actual set, is absolutely gorgeous. I was like oh, I have a father figure who gives me free suits. That’s how I look so good.”

Williams did not research being a high school principal, but he knew enough from experience. “I’ve known some,” Williams said. “My daughter’s 12 so I’ve been active in her school so I kind of identified that just through a bit of osmosis.”

9. WILLIAMS WAS THEIR FIRST CHOICE, BUT THEY DIDN’T TELL HIM

At this point you can’t picture anyone but Cress Williams as Black Lightning. Apparently the casting directors thought so too, but they didn’t show their hand.

“I was sweating a lot more than I guess I needed to,” Williams said. “I think behind the scenes, which I didn’t know as an actor, I was kind of their choice from the beginning. I went in, I auditioned and then I went in for essentially my final callback and then I just waited.”

Perhaps Williams got an early hint when he saw no one else in the audition room looked like him.

Black Lightning premieres Tuesday, January 16 at 9/8C on The CW.