8 Things to Know About Netflix's Kaleidoscope

The new Netflix drama Kaleidoscope is an all-star heist thriller with a twist. That’s more of a twist than the usual heist thriller. Season 1 of Kaleidoscope is eight episodes, but every viewer is going to see the first seven in a different order. Each episode takes place some time before or after the heist, filling in different details, before the viewer finally sees what happens.

Esposito, Gabrielle, Courtney, and Elbay spoke with Rotten Tomatoes about Kaleidoscope. Here are 8 things we learned about Netflix’s groundbreaking new show before it premieres Jan. 1.

1. THE EPISODE TITLES ARE COLORS, NOT NUMBERS 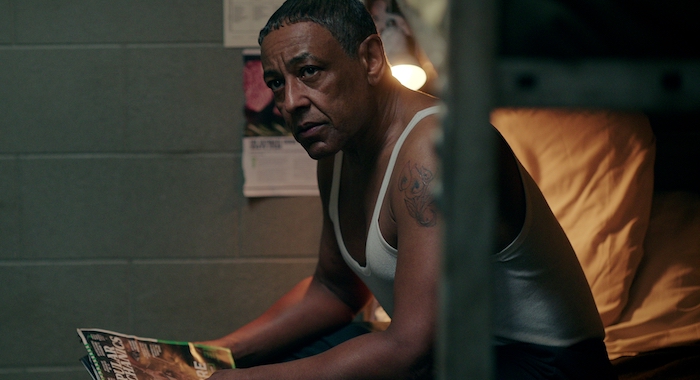 Esposito fully supported the plan to show Kaleidoscope episodes in a different order to every Netflix viewer. Since the numbers were irrelevant, scripts were color-coded, and the episodes themselves are identified by color rather than number.

Courtney said the randomized order will also contribute to the tension of the series.

“It’s designed to be digested that way,” Courtney said. “There’s no right way to do it. Hopefully it has people squirming a little and wanting to latch onto the chronology. There’s going to be a really satisfying quality to sitting with it and being a little behind the eight ball at times but knowing that that information’s going to catch up to them and there’ll be a payoff.”

2. THE ACTORS READ THE SCRIPTS OUT OF ORDER TOO 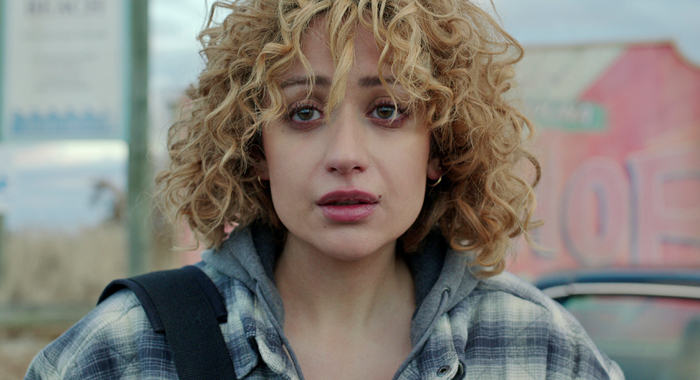 Each episode informs a different character, so the cast received the episode most relevant to their character first. For Elbay and Gabrielle, those were Red and Yellow. For Courtney, that was Pink. Since Judy (Elbay) and Bob (Courtney) are married, Pink proved relevant to Elbay too.

“I thought I had a pretty good grasp on Judy as a truth teller, like a really straight talker,” Elbay said. “Then the first time I met [creator] Eric [Garcia] for coffee, kind of in the middle of the conversation, he stopped me and was like, ‘Have you read everything?’ I was like no. And he’s like, ‘I’m going to shut up now. Go away and read all the episodes. When you’re done, read ‘White’ last and then call me.’ Then he got my breakdown at like one in the morning being like, ‘What is happening?’ If I had read ‘Pink’ first, I would’ve had a very different perspective.”

3. THE COUPLE THAT STEALS TOGETHER PLAYS TOGETHER 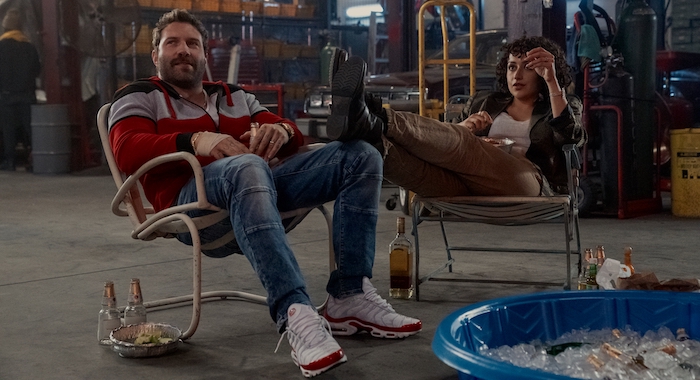 Bob and Judy are married and they behave like frisky newlyweds in most of the episodes. The life of crime seems to add to their passion.

“They enjoy each other’s companies,” Elbay said. “I think they make it very clear how much they’re into each other.”

This was clear to Courtney too.

“It’s unclear why else she’s sticking around if that’s not the case,” Courtney said. ““I think they know how to have fun.” 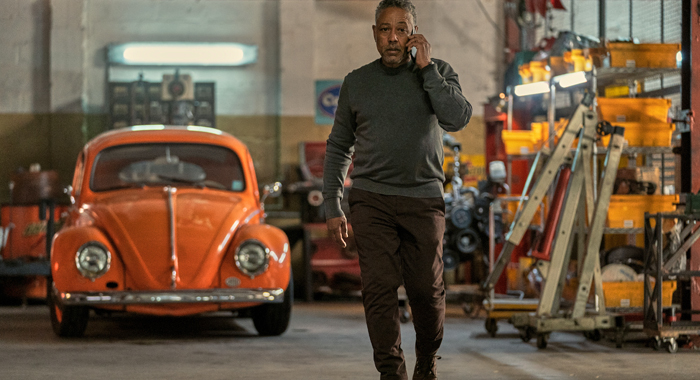 Wardrobe is important to Esposito as an actor. He has spoken in interviews about Gus Fring’s carefully composed tie and polished shoes in Breaking Bad and Better Call Saul as a way into that character. For Leo, Esposito went the other direction.

There’s more to an everyman than just affordable clothes. Leo dresses affordably for a purpose.

“This guy was always a guy who could blend,” Esposito said. “Now either you choose to blend, or you have to blend because you don’t have the money to stand out. So it was really a great boon to me to be able to do a film where, when I finished with it, I don’t want any of the clothes. You take them rags, baby. That was good. That means I was in the pocket.” 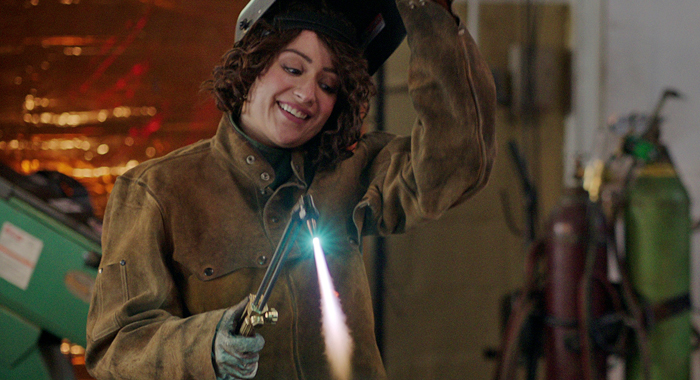 Judy is a chemical expert and part of the heist requires her to set a fire. Elbay got to handle the pyrotechnics herself.

“I got to be trained in how to blowtorch stuff by the fire department and they clapped for me because I didn’t set anyone on fire,” Elbay said. “Do you remember the shot where I was — no spoilers — showing you a certain thing that Judy can do, and I set the table on fire?”

That take is in Kaleidoscope. Courtney vouched for Elbay’s skills.

“She was melting s— all over the set,” he said. 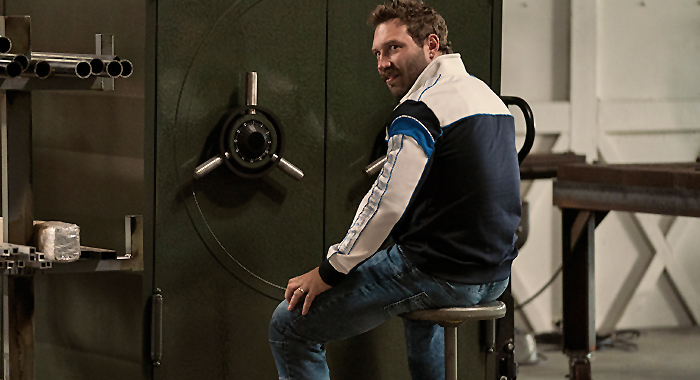 Bob is the safe cracker on the team, and Courtney can now crack a safe in real life, thanks to his training for Kaleidoscope.

“Not that I robbed any banks, but just saying I could if I wanted to,” Courtney said. “It’s actually really simple. There’s a few moving parts. I’m not going to go into detail — privileged information — but you just have to really work on a sensitive touch. There’s almost a sixth sense to it, but you’re basically listening to certain mechanisms land in place within the safe. It’s kind of how it looks. There’s not much to it, but you’ve got to be well practiced in order to do it well.”

7. TATI GABRIELLE DREW INSPIRATION FROM HER OWN MOTHER 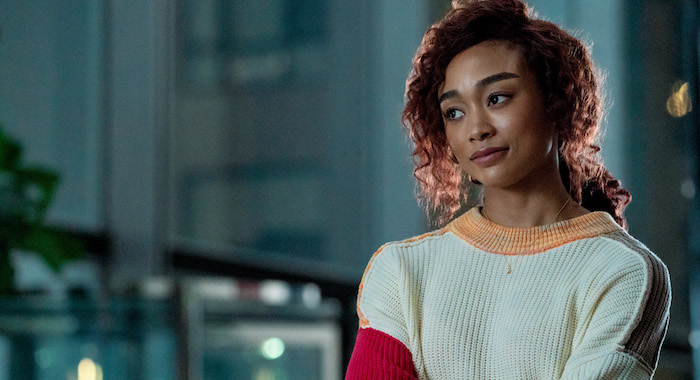 More will be revealed about Hannah’s connection to the heist depending on which episodes you see. Initially, Gabrielle said, Hannah embraces Salas because he serves as a father figure to her.

“My mother is an adoptee, and I referred to her a lot in understanding Hannah and understanding what it means not only to grow up without your parents and to grow up in a different family but to grow up feeling abandoned,” Gabrielle said. “That informs the spirit and how that can inform one’s value, one’s worth of themselves. I think Hannah already wanted a lot for herself. We see that Hannah, even as a child, was very ambitious, very spritely but through life.”

The heist challenges more than just Hannah’s job with Salas.

“Hannah struggles through this to reconcile with her past in a way of forgiveness and wants to right the wrongs that were made both against her and against those that she loved while still maintaining her own self-preservation,” Gabrielle said. 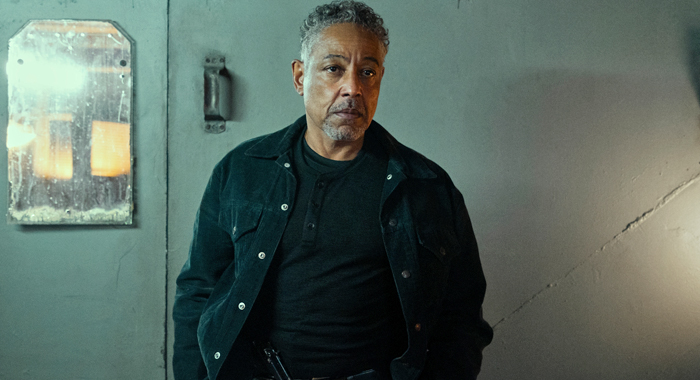 Kaleidoscope is Esposito’s first new show after the end of Better Call Saul. Bob Odenkirk’s heart attack during the final season delayed production, so Esposito almost missed Kaleidoscope. Once Odenkirk was recovered, Saul made sure to wrap up Gus Fring so Esposito could play Leo.

“They say timing’s everything,” Esposito said. “I was finishing up on Saul and this came to me. There was an issue of, will I be able to make the timing to get out of that to do this? Bob had had some physical problems, as everyone knows, in those last seasons of Saul, and would I be able to get out? My family and filmmakers over there were kind enough to say, ‘Look, we’re going to shoot you out so you can move on.’”