Fifteen years after it premiered, the show remains as charming, thrilling, and influential as ever. 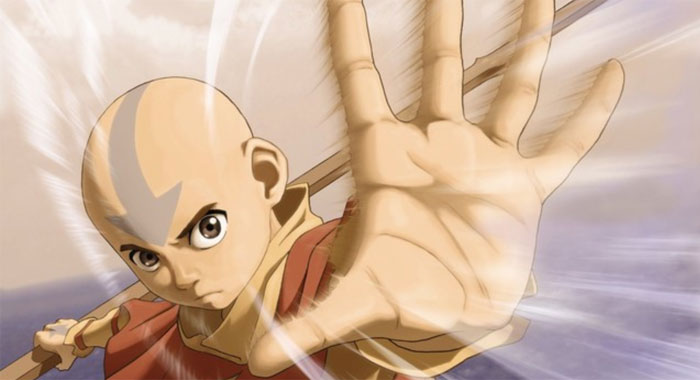 Before How To Train Your Dragon, before Adventure Time and Gravity Falls, there was Avatar: The Last Airbender. Nickelodeon premiered a show 15 years ago that was unlike anything they (or audiences) had seen before. Taking the serialized storytelling of anime shows as well as epic world-building and lore from big film franchises of the time like Harry Potter and Lord of the Rings, the result was a show with epic action, a rich mythology, and a story that still resonates to this day.

Now that Netflix and Nickelodeon have announced a live-action remake of the show, and to celebrate its 15th anniversary on February 21, Rotten Tomatoes spoke with animator and director Giancarlo Volpe about his work on Avatar: The Last Airbender. The director reflected on what made the show so special, and what advice he’d give show creators Michael Dante DiMartino and Bryan Konietzko on their new adaptation.


“Water. Earth. Fire. Air. My grandmother used to tell me stories about the old days…” so begins the first episode of the show, with an opening monologue that sets up the world of the show and its different cultures, as well as the conflict and the stakes at hand. Though the show only lasted three seasons, Avatar introduced us to a world full of history and lore, all without the need for overt exposition.

“You’d be surprised how little can set people off in the right direction,” Volpe told Rotten Tomatoes. “Just contrasting the air nomads, who have elaborate temples that are difficult to reach unless you can almost fly, with the water tribes that are primarily at the Northern and Southern poles of the planet surrounded by water and ice. Just the little things already make people’s imaginations soar.”

Indeed, the show feels more in line with something like Star Wars, which introduced us to alien creatures, technology, and history either visually or in passing conversation (like Luke name-dropping the Clone Wars without further explanation). In the first episode, we instantly feel that this is a world both familiar and completely different than our own. When we meet two of our main characters, siblings Sokka and Katara are out fishing. Katara uses some magical abilities that her brother refers to as “an ancient art unique to our culture.”

Their village closely resembles traditional Inuit culture, just like the other nations resemble real cultures like ancient China, imperial Japan, and Tibetan Buddhists, yet we also see things like a “tiger seal” or a group of “otter penguins” which are exactly what you imagine. The show introduces us to past wars, kings, kingdoms and legends all via conversation or subtle visual cues, making its world feel lived-in. Even if you probably won’t be able to write a history book about the world of Avatar like you would Middle-Earth, you get a sense that a lot more is happening on the world than what our characters are going through.

2. THE LAST AIRBENDER’S STORY FOR KIDS GETS DARK 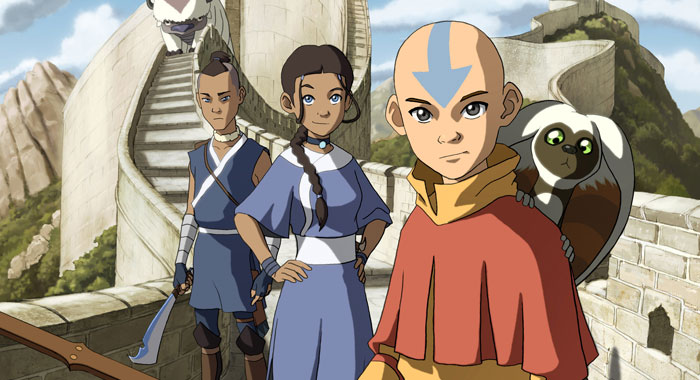 Even though it was primarily aimed at kids, played with juvenile humor, and had a Y-7 rating, Avatar wasn’t afraid to explore some dark subjects. From the opening monologue we know that the world of the show has been involved in a war for 100 years, but by episode 3 we learn the serious consequence of that war.

“The air benders were wiped out while Aang was frozen for a hundred years,” Volpe explained. “We basically dealt with a Holocaust in our third episode. And we always had to do it in a way that made it appropriate for the Nickelodeon channel and brand. We saw how they handled that kind of subject matter in anime and figured out how to tell those stories in an accessible way. It became more about how the characters react to it, more than the thing itself. We don’t explicitly say the word genocide, but we see Aang’s pain at seeing his old friend dead, and we can imagine the rest.”

Avatar does deal with heavy themes such as war crimes, class division and corporal punishment, but it’s always through the eyes of its young cast. With this, the show doesn’t have to explicitly tell us anything, but show enough of a hint that older audiences know the gravitas of what’s going on, while younger audiences understand how the characters feel about what’s going on. They may not be able to express that there is a puppet government in the Earth Kingdom, but they know the King isn’t the one in power, because our characters seem confused when the king isn’t aware of the war outside his walls. They may not know what executions are, but they know that the water benders the Fire Nation captured never returned home.


Even if we had seen action cartoons before Avatar, none had its eye for action or sense of scope. In just 3 seasons we got hand-to-hand combat that rivaled classic kung-fu movies, and large-scale battles that rivaled big-budget Hollywood blockbusters. Each of the four nations had their own unique style of bending, inspired by real martial arts, making the fight scenes look fluid and grounded in reality. The show creators also insisted on animating the show as if it was live action.

“I was not used to drawing stuff in all these crazy angles,” Volpe told us. “But Bryan [Konietzko] would ask us to use a wide-angle lens to make it feel cinematic.”

By season 3 the show included full-scale invasions with dozens of war balloons, tanks and fighters that brought audiences to the middle of a battleground. The production team took some lessons from watching anime in learning how to do big battle scenes.

“We had ways we could cheat it so that it implies Lord of the Rings–style battling, but you’re not killing yourself doing that,” Volpe said. “But what works in your favor is that you care about who wins, so as long as we point the camera at that person the show feels more satisfying that simply watching 800 tiny fire benders from above.”

4. THE SHOW’S CHARACTERS GROW UP WITH THE AUDIENCE


Just like live-action shows, the vast majority of cartoons were episodic, meaning each episode could stand on its own so that if you missed an episode you could still understand everything. Though Avatar still has fairly standalone episodes, the writers still had a clear path in mind, and all the actions taken by the characters have dire consequences.

This is done mostly through character arcs, as we see Aang, Katara, and Sokka grow up and mature through the show’s run, as does the villain, Zuko. As they travel the world to find a way to end their war, Aang finally accepts his responsibility as Avatar, Katara learns to cope with her trauma and forgive the Fire Nation for taking her mother away from her, and even Sokka takes more of a leadership role.

The show’s greatest feat, however, was its treatment of Prince Zuko of the Fire Nation, and how he went from villain to hero. During the span of its three seasons, we saw Zuko struggle with his legacy and what he thought was his duty. We learned of his complicated past and the events that led to him becoming a reluctant villain, and even see him confront the sins of his past and his nation by meeting those who were victimized by the war. This all serves to make Zuko’s struggle to become good all the more poignant, as audiences see him consider and even attempt at turning sides several times, so that when he finally follows through and decides to help the Avatar, the audience knows he earned forgiveness.

“I remember there was a debate when we made season 2,” Volpe explained. “The writers considered turning Zuko at the end of that season, but then it felt like it was too early, and it would actually hurt more if he messed up and took longer.”

5. AVATAR: THE LAST AIRBENDER HAD A PERFECT ENDING 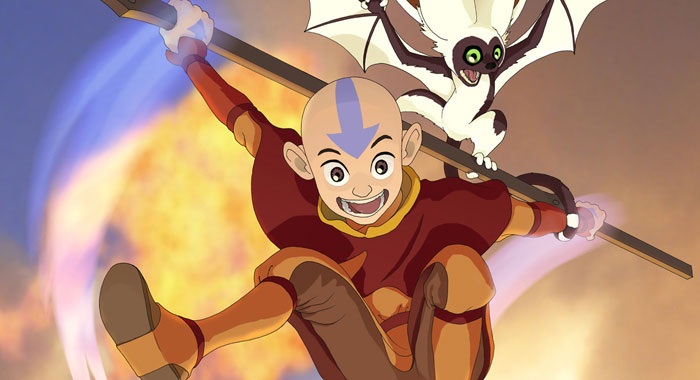 Because of its serialization, there had to come a point when Avatar would end. Where most other contemporary cartoons would simply run its course with an episode that resembled any other, Avatar was building up to an epic finale since its first handful of episodes. We knew Aang would have to face and defeat the Fire Lord because otherwise he would take over the world and enslave everyone, we knew the show couldn’t end before and it couldn’t really continue past it, so the audience knew they’d have to prepare to say goodbye.

And what a finale it was, structured as a two-hour movie, Avatar tied up loose ends, paid off character arcs and relationships, and deepened the mythology, culminating in Aang fulfilling his destiny and bringing balance back to the world in one of the most epic fights ever produced in any medium.

It also proved to be a very influential finale, as Avatar: The Last Airbender continues to inspire changes in what wee think of as children’s animation.

“What I saw after Avatar was a number of shows that were recruiting me that wanted more of what we did on the show, usually when it came to the fighting styles of that show,” Volpe said. “Likewise, our approach to serialization, doing standalone episodes that still build a coherent and linear story, is a request I hear to this day. Streaming works incredibly well with this, because you’re much more likely to want to watch the next episode if the story is serialized. There definitely seems to be a demand for something more like Avatar, it changed the type of jobs I was getting after it wrapped up, going from King of the Hill–style comedies to things like Star Wars.”

Of course, though the story of Avatar: The Last Airbender may be over, Netflix decided it wasn’t done with Aang and his friends and announced last year that original creators Michael Dante DiMartino and Bryan Konietzko will return to make a live-action adaptation of the show.

Volpe had a piece of advice for the remake: “I think what’s interesting is figuring out who the target demographic is for the live-action show. Are they catering to the next wave of children or the 30-year-olds who watched the show when they were 15 or 20? If so, it could give them some artistic license to age it up. It’s an intriguing question to ponder.”