2018 Holiday TV Calendar: A Guide to Every Special, Episode, Marathon and Movie of the Season

New Year's TV and streaming offerings include Doctor Who's annual tradition tweaked, and more! Find out when and where to watch every holiday special.

It’s the most wonderful time of the year: Time for you to utterly destroy any free space remaining on your DVR with holiday cheer of all sorts.

This year there are more than 65 original Christmas movies headed to Freeform, Lifetime, Hallmark, and Netflix — along with a cornucopia of other broadcast and cable holiday-themed fare. From one-off specials of your favorite reality competitions (RuPaul’s Drag Race, Nailed It!), comedies (Schitt’s Creek), and dramas (Chilling Adventures of Sabrina), to cooking series of all types, there’s something on this list to please even the crankiest members of your family.

So pour yourself a cup of hot cocoa and peruse 2018’s holiday marathons, specials, series, and movies — then crank up the TV and kill that awkward small talk with your Great Uncle Marty. Check back periodically throughout the season as we add more listings.

A Midnight Kiss, Hallmark, 8 p.m. — With only one week to prepare, Lisa Patterson (Adelaide Kane) and her family of party planners are given the biggest job in their company’s history: a New Year’s Eve party for tech entrepreneur Megan Clark. But when her brother breaks his leg and her parents head off on a planned vacation, Lisa must reluctantly enlist the help of her brother’s visiting college buddy, David Campos (Carlos PenaVega), to help her pull off the event. But what Lisa didn’t plan on was falling in love in the process.

Sunday, Dec. 30
The Twilight Zone Marathon, Syfy, 11 p.m. — The network’s annual marathon will run through Wednesday, Jan. 2 at 6 a.m. and will include fan-favorite episodes “Nightmare at 20,000 Feet,” “A Quality of Mercy,” “The Monsters are Due on Maple Street,” “The Invaders,” and “The Encounter.” 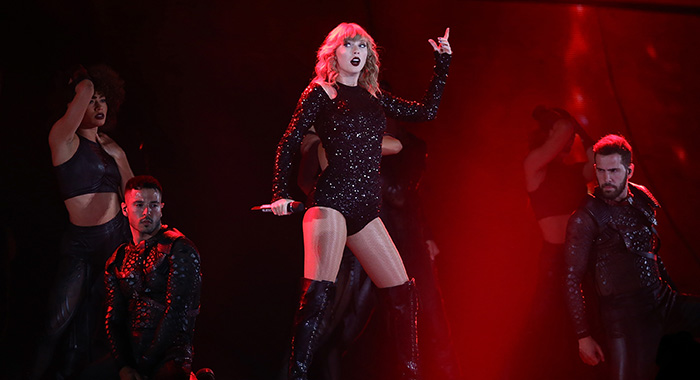 Taylor Swift reputation Stadium Tour, Netflix — Couldn’t get tickets to the pop superstar’s latest tour? Catch the filmed version from the comfort of your own home.


“Who Year’s Day” Doctor Who Marathon, BBC America — Instead of a traditional Christmas Day special, the eleventh season of the Doctor Who revival starring new Doctor Jodie Whittaker will air a New Year’s Day special.