Solid performances and an eerie production quality lift up this brooding period piece. The series provides plenty of twists, but slow story pacing and some meandering plotlines may deter some viewers.

1899 is the latest from Baran bo Odar and Jantje Friese, the creators of Netflix’s Dark, and centers on a migrant steamship leaving the old country. Its passengers, of various European descent, united in their hope for the new century and dreams for a brighter future. But when they discover another migrant ship that needs assistance, their quest takes an unexpected and horrifying turn.

Considering the mystery behind the project, anticipation is running high. But does it deliver the goods? Here’s what critics are saying about season 1 of Netflix’s 1899: 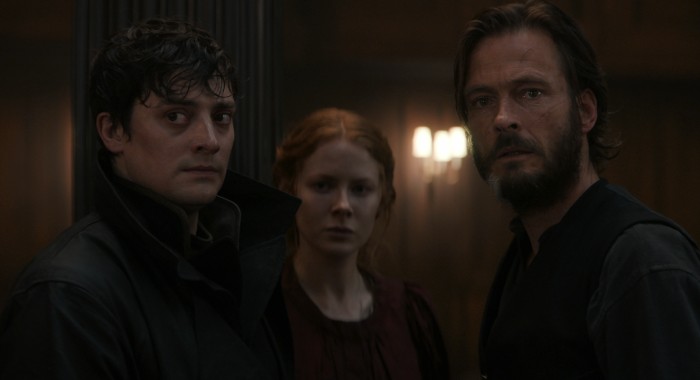 [1899] is so jam-packed with torment, hardship and dissonance, that it makes waves for all the wrong reasons. —Elizabeth Gregory, London Evening Standard

The series skillfully interweaves with inherent ease the central plot and how it affects the group of immigrants, allowing for more personal storylines that permit the cast to find their voices. —Mikel Zorrilla, Espinof

While the show succeeds in cultivating an increasingly eerie atmosphere, it comes at the expense of compelling dialogue and characterisations. —Dan Einav, Financial Times

‘1899’ does a splendid job of spreading the clues around for the viewers. The answer always seems in sight, but somehow, it goes farther away the closer you get to it. —Diksha Sundriyal, The Cinemaholic

While all the fundamentals are there, the lightning in a bottle that made Dark so captivating isn’t present (at least not yet). And without that, all the flaws of this subgenre become glaringly evident. —Dais Johnson, Inverse

Fans of Dark will likely find the secrets and mysteries of 1899 a little conventional…[The series] still features plenty of unanswered questions, but, compared to Dark, its approach to narrative should be much easier for casual audiences to follow. —Joe Lipsett, Bloody Disgusting

With magnificent production design, multiple languages, solid performances, and an incredibly twisting story, 1899 has the makings of a show that will be beloved by few but unseen by many. —Michael Frank, Paste Magazine

Although 1899 starts off achingly slow, there are enough storylines going on that we hope things pick up as the mysteries surrounding the Prometheus deepen. —Joel Keller, Decider

As some of the mysteries unravel, the only thing that remains is the humanity of the characters, however, the problem is that they come and go in a hurry with nothing much to say. —Milagros Amondaray, La Nación (Argentina)

The series nails the tone, the setting, and, of course, that feeling of dread. —Paul Dailly, TV Fanatic

With its absorbing ensemble of international characters and their unfolding personal stories, the eerie production design, and brilliant cliffhangers, we dare you to not keep pressing play too. —Tara Bennett, IGN Movies