10 Things to Know Before Tackling Season 3 of Black Mirror

To binge, or not to binge, that is the question. 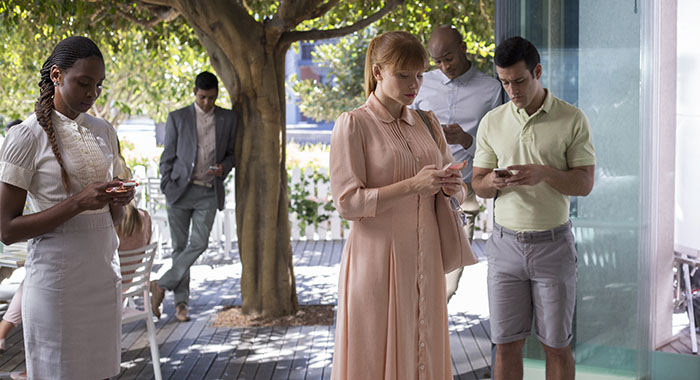 The British TV series Black Mirror became a Netflix phenomenon when it premiered on the streaming service. Each episode tells a new story with a new cast, somehow revolving around technology. You could say the black mirror is all of our screens on television, phones, and viewing devices. Since each episode was a stand-alone story, and there were only two seasons with three episodes each, fans quickly made it through all six episodes and then a seventh with the show’s Christmas special.

We spoke with Black Mirror creator Charlie Brooker and producer Annabel Jones during the Television Critics Association’s Press Tour this summer. Here are 10 things we learned about the season 3.

1. TECHNOLOGY IS NOT EVIL. WE ARE. 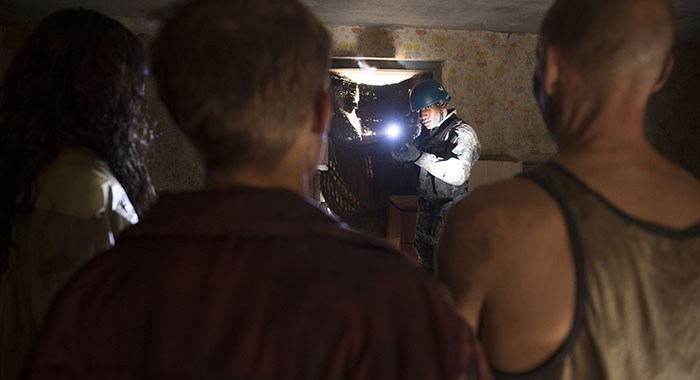 It’s easy to see Black Mirror as a series of cautionary technology tales. Dig a little deeper, however, and the message is a little more reflexive than that. It’s not the technology we should be worried about it. It’s us and how we use it that could be horrifying.

“I think we’re more about the side effects,” Brooker said. “We don’t tend to have evil corporations or evil gizmos. I’m a fan of technology generally. I’m not like [grumpy muppets] Statler and Waldorf shaking a fist at the App Store — well, sometimes I am. Our stories tend to be primarily human stories about a dilemma in which the technology often facilitates a character’s downfall.”

“It’s much more about the human drama, the human story,” Jones said. “The technology is not the evil. It’s the facilitator, and it’s often what we’re doing. So it’s all led by the individual. Do we overshare? Do we not have any sense of privacy anymore? We’re the perpetrator.”

2. THIS SEASON GOES “BLACK” IN TIME 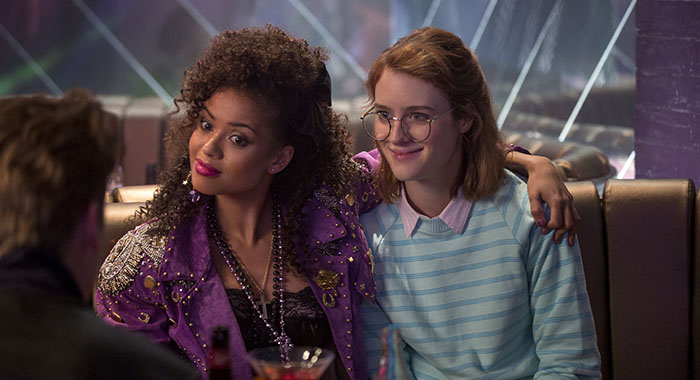 Season 3 features the first Black Mirror period piece. Although the ’80s may not seem that long ago to those of us who lived through it, viewers under 30 may have no firsthand memories of the decade at all.

“That partly came about through thinking what would people not expect from Black Mirror was a period episode,” Brooker said. “So that’s partly how that came about.”

Jones herself lamented that 1987 is a period piece now and Brooker added, “Yes, it is depressing. At the moment, last week is ‘period.’ The pace of change is such that the start of this interview was ‘period.’”

Social media is one aspect of technology that has taken over all our lives. While they’re not saying if the episode is explicitly about Twitter, Facebook, and Snapchat, Brooker and Jones already spoke about oversharing and giving up privacy. They later confirmed there is at least one episode centered on social media and others that touch on it too.

“It’s interesting, when you look at things like social media, that’s an immensely powerful tool that I’m all in favor of,” Brooker said. “I think it’s amazing. It’s a powerful tool, and it’s one that we’re, as a species, still grappling with learning to use. It’s like we’ve grown an extra tail or something, and we inadvertently lash out and knock over all the furniture.

“We’re still, I think, an animal dealing with the consequences of these miraculous tools we’ve invented. That’s our area, I guess,” he continued. “We do have one where social media is at the forefront of an unfolding mystery, effectively — probably a couple that are fairly explicitly about social media.”

4. EACH EPISODE IS A DIFFERENT GENRE 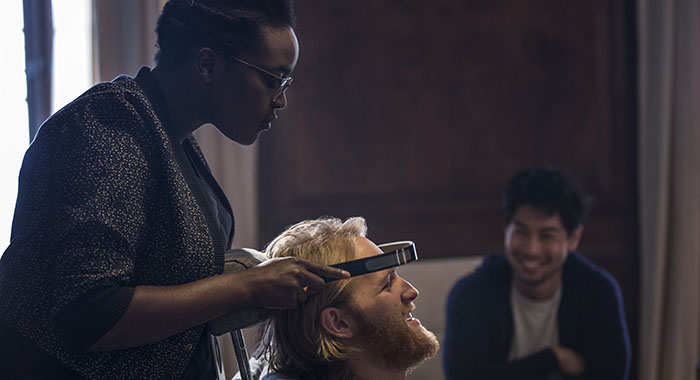 Black Mirror consistently falls in the science fiction category, particularly with episodes set in dystopian futures or with fantastical technology. With only three episodes per season in the past, science fiction was a good catch-all description. Now with six episodes in season 3, each episode can stand out in a unique genre.

“Now that we’re doing six this season, there’s a lot more variety across the season,” Jones said. “So we venture into different genres. One is a police procedural. We also have a love story. We have a thriller. [We have] what we would call ‘kitchen sink’ — that’s a British phrase, a domestic, grounded story. So there’s a variety of genre, but there’s a consistency of tone.

“We always try to make the films entertaining — whether that’s thrilling you or teasing you or scaring you,” she said, “but there’s always a dark humor to them as well I think that’s interesting. There’s a playfulness. We’re making comments on the world, but doing it in an entertaining and often sarcastic way.”

Jones named four. Brooker added three more, which means one episode blends two genres.
“We’ve got a military story,” Brooker said. “We’ve got a horror romp from Dan Trachtenberg. Joe Wright has done us a social satire, which again has kind of got social media at its core, but it’s kind of in a slightly wacky world.”

5. ONE EPISODE IS A PARKS AND REC REUNION 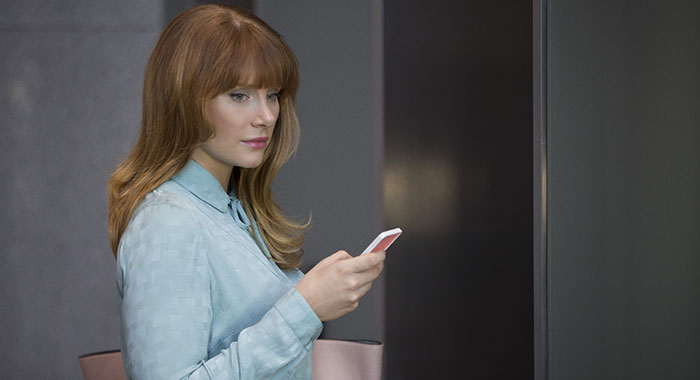 Black Mirror attracted filmmakers like Joe Wright and Dan Trachtenberg. What you might not expect is the team behind Parks and Recreation: creator Mike Schur and Rashida Jones, who has become a successful screenwriter since starring on the NBC comedy, collaborated on one Black Mirror episode.

“That came about because it turned out they were fans of the show, and the feeling was mutual,” Brooker said. “That episode is ‘Nosedive,’ the episode starring Bryce Dallas Howard and Alice Eve, and it’s directed by Joe Wright. That I would classify as a social satire about kind of identity in the social media age. That’s the most boring way I could describe it. It’s kind of like a cheerful pastel nightmare, that story. It’s quite a playful episode in many ways, but it’s also quite nightmarish.”

6. ONE EPISODE IS A WHOLE MOVIE

Because Black Mirror is on Netflix, there are no time constraints. It is generally an hour-long show, but it breaks so many rules already, why not make one a 90-minute movie?

“One of the great things about being on Netflix is obviously the story can dictate its length and duration,” Jones said. “So one of the episodes is a 90 minute-er because it had to be, and it felt this way. So there’s a lot of creative freedom and a sense of a lot of liberty. Feels quite liberating being on the platform whether you want to, and you can watch them however frequently you want.”

7. AND IT’S ABOUT POLICE VIOLENCE 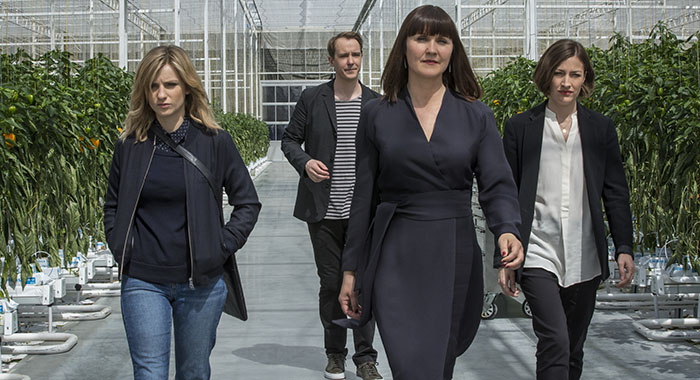 Recent years have brought to light disturbing problems with police violence, from Ferguson to North Carolina. When Black Mirror deals with the cops, a single hour cannot contain it. So Jones revealed the 90-minute episode revolves around police issues.

“It’s a police procedural with Kelly Macdonald,” Jones said. “It’s about society, and it’s about just how we communicate and online rage and the consequences of that. That particular episode, there’s nothing immersive or new tech in it. It’s just sometimes the stories tend to be about the modern age and the modern world that we’re living in.”

Without giving away spoilers, the producers did reveal there is an armed police officer in the episode.

“I don’t think we shy away from things based on what’s going on in the real world,” Brooker said. “I mean, the real world is so upsetting and chaotic and bizarre at the moment that our challenge is kind of staying ahead of it creatively, I guess. “

8. DON’T TAKE THESE SO SERIOUSLY

You can tell that the creators of Black Mirror are kind of twisted. It actually surprises Brooker that the episodes are taken so seriously, because he considers them darkly comic. Even the pig one.

“In the U.K., I’m known for doing comedy things and things like that,” Brooker said. “I think that doesn’t often translate in the U.S., so I’m often absolutely howling with laughter when coming up with the ideas for this show which we then play straight. I find it amusing often, I’ve sometimes read critiques of the show and it’s like, ‘Who is this angry guy who’s furious with the internet?’ I’m quite a dweeb. I love games and technology and all of that stuff. I’m an early adopter of everything.”

Jones may be the voice of reason in the duo.

“If Charlie’s laughing and I’m crying, then I know we’ve got a good episode,” she said. “That’s the sort of gender stereotype we like to have in our production.”

9. IT’S TOO MUCH TO BINGE WATCH 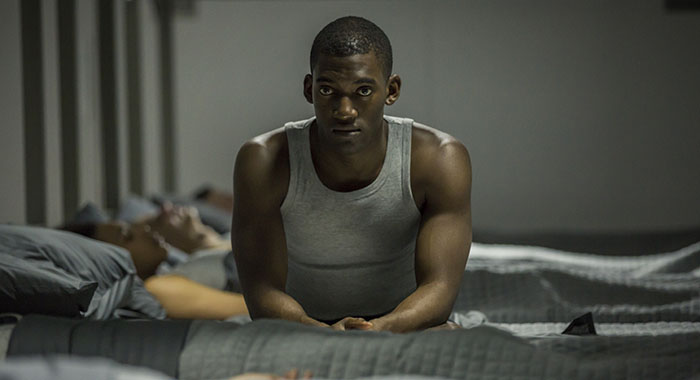 Black Mirror episodes can cause physical anxiety. For example, the “Fifteen Million Merits” episode feels like a physical assault with its video cubes forcing loud advertisements on the characters, and, consequently, the viewer. One episode at a time is a challenge, so six in a row seems impossible.

“I don’t know that we’re really much of a binge-watching show, because it’s a bit like being hit by a car,” Brooker admits. “How many times can you get hit by a car in one day? I don’t know to what extent people watch one episode after the other with us, because we give you a beginning, middle, and an end. We’re not teasing you out. The way we approach the show is to think of it like a little film festival, like we’re giving you six tickets to six films at a movie festival basically.”

That’s not to say you can’t put yourself through the endurance test of six Black Mirrors in a row.

“I don’t recommend not binge-viewing,” Jones clarified. “People have the option on Netflix so that’s great. If people want to watch in more than one go, good. If they can stomach it.”

10. DONALD TRUMP IS TOO BIZARRE FOR BLACK MIRROR

Black Mirror tackles current technology and even politics, but one topic seems too far-fetched for even an episode of the science fiction anthology: Even Black Mirror wouldn’t know what to do with a reality TV star running for president of the United States.

“We don’t really do American politics in these episodes,” Brooker said. “Thank God we didn’t in a way because it got so bizarre over the last six months, how could we have foreseen that coming? No, we couldn’t have foreseen quite how odd politics generally was going to get. We try to stay one step ahead of the weirdness of the world which is increasingly tricky.”

All six episodes of Black Mirror‘s third season premiere on Netflix on Oct. 21