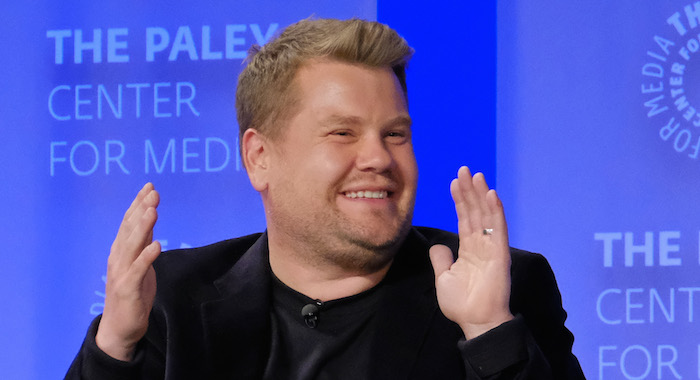 James Corden and the producers of The Late Late Show with James Corden sat on the first-ever talk show panel at PaleyFest’s annual celebration of hit TV shows in Los Angeles this week. With accomplishments such as creating the phenomenon of Carpool Karaoke, getting more than 100 million YouTube views for videos of Adele and Justin Bieber, and launching two spin-off shows (Apple Music’s Carpool Karaoke and Drop the Mic on TBS), there was plenty to discuss.

Corden and producers Ben Winston and Rob Crabbe spent an hour sharing some behind-the-scenes stories with fans in a discussion moderated by Bradley Whitford that spanned the first two years of The Late Late Show. Turns out there’s some juicy stuff no one saw with Tom Cruise, Cuba Gooding Jr., and Red Hot Chili Pepper Anthony Kiedis.

Here are seven Late Late Show secrets shared on the panel, including Corden’s proposal for what he’d do if President Donald Trump ever visited the show.

1. THIS GAME WOULD BE PERFECT FOR TRUMP 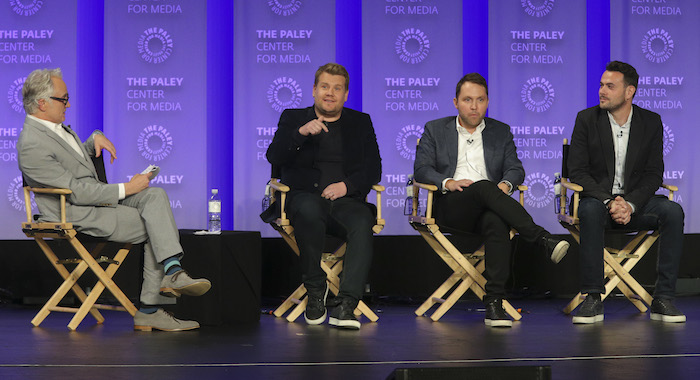 If Corden had the president on his show, he wouldn’t just do a sit-down interview. He’d invite Trump to play one of his comedy games, but not something like Emoji News (where contestants try to decipher a news headline in emojis). Actually, Corden would invent a new one.

Corden has met Trump before: When the then-Apprentice host attended a performance of Corden’s 2011 Broadway play One Man, Two Guvnors, Corden made a spectacle of him.

“When I was in One Man, Two Guvnors I pulled him up on stage,” Corden said. “I spanked him, I fired him at one point. It was great.”

Winston still wasn’t sure he’d want to book the president on the show at all. “I don’t know the answer to that,” the producer said.

The Red Hot Chili Peppers were one of the most popular Carpool Karaoke segments. It’s a good thing they all fit in the car, because there’s a baby that might not be alive today if Kiedis wasn’t there.

“It was a bit that never made the show,” Corden said. “We were doing some kind of dance battle out in the street. Kiedis said, ‘Whoever wins buys some fruit from that fruit stand.’”

When they were at the fruit stand, a crisis unfolded.

“This grandmother came out of her house with a baby flopped over her arm just going, ‘Help me. Somebody help me. Call an ambulance.’” Corden added. “The mother of the baby, the daughter, was screaming. Anthony Kiedis just sprinted across the road, took this baby — whose eyes were rolling back — laid this baby down, and started rubbing their chest. Just going, ‘It’s okay. She’s breathing, breathing,’ rubbing the chest like this.”

He continued, “He was so calm, going, ‘Shh, shh,’ and this baby sat up and let out the biggest burp. And then [the baby] was fine and he handed it back to this woman. Then she saw all these cameras. We went, ‘See you, bye,’ got in the car and carried on.”

One of Corden’s most ambitious segments is Roll Call, where he reenacts a movie star’s entire career. The very first Late Late Late Show featured Tom Hanks doing Big, Forrest Gump, The Da Vinci Code, and all the hits. When Tom Cruise did Roll Call, they did the “Show me the money” scene from Jerry Maguire and Cuba Gooding, Jr. stepped in to do his side of the phone call. Here’s the secret: They filmed Gooding first, months ahead of time.

“It says something about the ambition and, dare I say, chutzpah of our show,” Corden said. “We shot the Cuba Gooding side before we’d ever booked Tom Cruise on the show. We were like, ‘At some point, Tom Cruise is going to come on this show. At some point and we’re going to beg and beg and beg for him to do Roll Call. Cuba Gooding’s here on this Tuesday and this’ll be an amazing moment. So let’s shoot this half.’”

Winston fudged it a little for Gooding’s sake. “Cuba said, ‘When’s Tom doing this?’” Winston recalled. “I said, ‘A couple of weeks.’”

The truth, Corden revealed, was slightly different. “It was about nine months before Tom Cruise came on.”

4. NO ONE WANTED TO DO CARPOOL KARAOKE AT FIRST

It’s hard to imagine any artist turning down a Carpool Karaoke now. In fact, The Late Late Show is now fielding more requests than it can possibly shoot, and there’s even a spinoff series on Apple Music. But when producers first began pitching the segment they could not book an artist.

To be fair, Corden was sympathetic to the artists’ representatives — it did seem like a crazy idea, and the show was not even on the air yet.

“You’re phoning a publicist,” Corden began, imitating both sides of the conversation. “‘I’m calling from The Late Late Show with James Corden.’ ‘I’m sorry, who?’ ‘It’s a show. What we’d love is your artist to get in a car.’ ‘Will I be in the car?’ ‘No, no one in the car. Just the two of them and they’ll drive around.’ ‘Sorry, who is this guy?’ ‘They’ll drive around and they’ll sing the hits.’ ‘Is it on prime time?’ ‘It’s not. When this segment airs it will be about 12:54.’”

In the end, it was one A-list artist who gave Carpool Karaoke credibility. “God bless Mariah Carey,” Corden said.

Someone should put a camera in Corden’s real car. His prep for Carpool Karaoke sounds like a show in itself!

“The week before a Carpool Karaoke, if you leave the office at the same time as James and he’s behind you, it’s the most wonderful thing to witness,” Winston said. “You look in your rearview mirror and all you see is this absolute nutball sitting there, singing and dancing. It’s a sight to behold seeing a 38-year-old man singing Britney tunes at the top of his voice.”

Drop the Mic is a celebrity rap battle segment so popular it’s getting its own TBS series this summer. While Drop the Mic debuted with Anne Hathaway, David Schwimmer was a guest two nights later and he wanted in.

“He called the office and said, ‘I saw what you did with Anne Hathaway. I want to do that myself.’” Winston said. “We never do a bit two days later but if David Schwimmer is calling you and he’s written his own rap, you’re like, ‘Sure.’”

Corden resisted doing Drop the Mic twice in one week, but was won over by Schwimmer’s mad rhymes.

“They showed them to me and I remember I said, ‘Right, it’s going to be a bloodbath,’” Corden said.

In Crosswalk the Musical, Corden leaves the studio with a troupe of backup dancers and walks to a nearby intersection. During red lights, they perform as much of a Broadway song as they can before the lights turn green. Corden admitted that when he did Phantom in the Opera in the streets, he got a little too zealous for the cops.

“The Phantom of the Opera one, I kept running out into the cars,” Corden said. “I came back and would just go, ‘I’ve got to get back out there.’ There’s a policeman there. He came over and went, ‘James, if you do that again, you’ll never be allowed to film here ever again. And I went, ‘But they love me!’”

The Late Late Show with James Corden airs weeknights at 12:35 on CBS

The PGA announced the winners of the 2017 Producers Guild of America Awards, which were held today at the Beverly Hilton Hotel in California. Read through for the full list.

Kubo and the Two Strings
97%

The Secret Life of Pets
72%

The Night Of: Miniseries
94%

The Award for Outstanding Sports Program

The Award for Outstanding Digital Series