What Peacemaker Season 2 Could Hold

Whether she's on screen or off, Amanda Waller will be out for blood. We look at a few options for Peacemaker and crew in the second season.

With the expert use of Wig Wam’s “Do Ya Wanna Taste It,” plenty of guts, and a surprising amount of soul-searching, Peacemaker concluded its first season on Thursday – mere hours after HBO Max confirmed it will return. Series creator James Gunn and star John Cena are expected to return. The other characters, the setting, and even the plot, though, are up for grabs. And in an unusual move for superhero media, the finale did not tease what’s coming next (even if it gave us some unexpected cameos).

So let’s dig into the Charlton Comics longboxes, some DC Comics history, and Gunn’s tendencies as writer for a few potential storylines Peacemaker could introduce when it returns.

Spoiler Alert: The following includes details from the Peacemaker season 1 finale and from DC comic books that some may consider spoilers of the books and potential future storylines in the series. Stop reading here if you want to avoid potential spoilers. 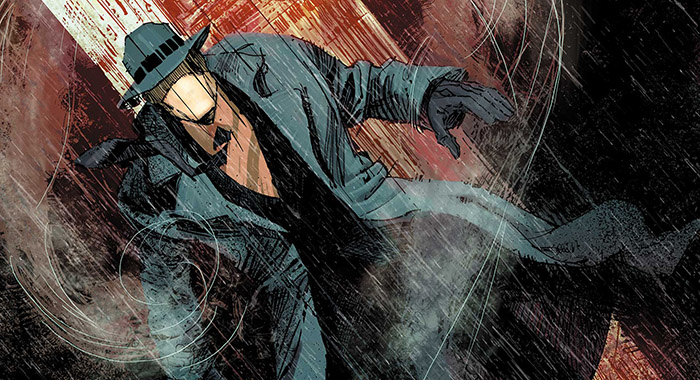 We’ll be honest, this one is simple wishful thinking: Peacemaker was originally published by Charlton Comics in the 1960s. One of his stablemates was Steve Ditko’s The Question. Both were eventually purchased by DC Comics and both would serve as the basis for characters in Watchmen – The Comedian and Rorschach, respectively. The Question also enjoyed a solid run in his own DC comic book by Denny O’Neil and Denys Cowan. But despite his pedigree, he has somehow eluded live-action adaptation.

Behind the distinctive blue trenchcoat, fedora, and faceless mask is Vic Sage, an investigative reporter in Hub City who adopts a second persona to root out the causes of crime in his municipality. For a time, he espoused Objectivism, but after Lady Shiva thoroughly trounced him, he learned new forms of martial arts and new philosophies which, ultimately, make him a better man. So much so, that he eventually aids a spiraling Renee Montoya and passes The Question identity to her as he himself passes away in the mountains near Nanda Parbat.

The rich history is ripe for Gunn re-invention. Based on the first season of Peacemaker, we could see him as a Objectivist trying to convince Chris (Cena) that he was right about the Deep State all along. He could also appear as a guru of sorts, having passed through the flames and trials of the O’Neil and Cowan comics to a place of superhero enlightenment.

Or, as suggested by his animated counterpart on Justice League Unlimited, he could question the revelations about A.R.G.U.S. that Adebayo (Danielle Brooks) gave to the press and take action, aiming first for Peacemaker. 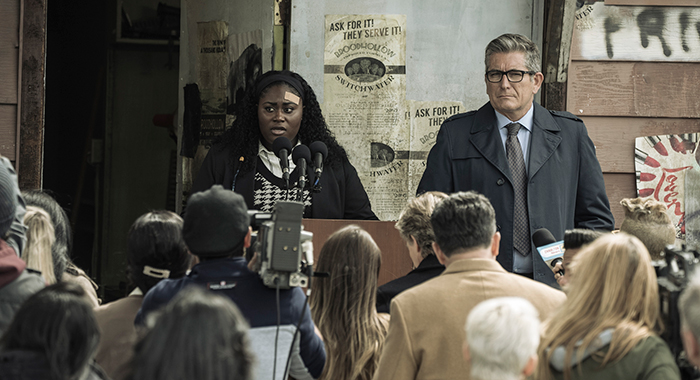 So, for the moment, let us assume Adebayo’s press conference led to the dissolution of A.R.G.U.S. If there is one thing we know her about mother, Amanda Waller (Viola Davis), is that she always finds a way to stay part of the intelligence apparatus. Enter: Checkmate. Created by Paul Kupperberg and Steve Erwin in 1988, the organization was another of Waller’s black bag projects, although presented as a smaller branch of Task Force X, utilizing chess pieces to denote rank and function. The organization went through various dramas, entered into open conflict with the Suicide Squad, and eventually became a U.N.-sanctioned metahuman monitoring group.

Like The Question, Checkmate has somehow avoided live-action adaptation despite its interesting premise. In lieu of the organization, A.R.G.U.S. remains the key security agency in the Arrowverse, Doom Patrol’s Earth-21, and the so-called DC Extended Universe of Peacemaker.

Despite Peacemaker leaving John Economos (Steve Agee) back at Belle Reve Penitentiary, Emilia Harcort (Jennifer Holland) in physical therapy, and Adebayo back with her wife, Keeya (Elizabeth Faith Ludlow), it’s not hard to imagine them all ending up as pawns on Checkmate’s board. Also, we image that sort of cloak-and-dagger business would be irresistible to Chris and Vigilante (Freddie Stroma).

But who’s controlling the board? 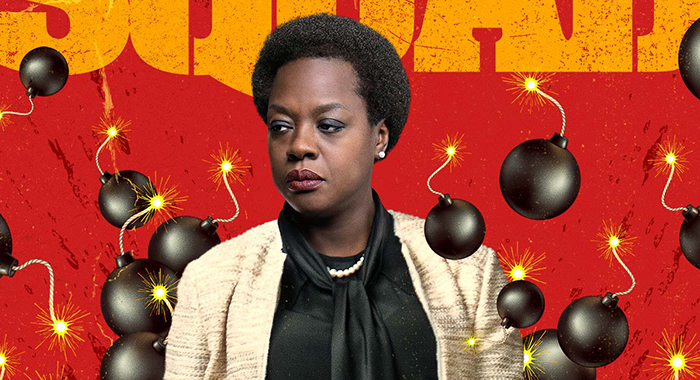 Since Peacemaker is seemingly taking the place of sequel to The Suicide Squad, we imagine the next chapter of Waller’s story will take place in the series. Or at least for as much as Gunn can convince Davis to come in and shoot some scenes. But whether seen or not, we imagine Waller will be out for blood — even that of her own flesh-and-blood — following the first season finale. And whether or not she uses A.R.G.U.S., Checkmate, or her own two hands, our lovable gang of misfits are in for a world of hurt.

Or are they? One of the mysteries of Peacemaker — at least for those familiar with Waller from the comics — is her decision not to terminate (for any meaning you’d like) Economos or Harcourt for their roles in the situation room rebellion seen in The Suicide Squad. Hell, her restraint has to be puzzling to those who saw her personally annihilate a previous situation room staff in the first Suicide Squad. Both Economos and Harcourt assume having to work with Chris was her revenge, but that seems somewhat lacking in severity for the disloyalty they both displayed.

It is possible Waller is more talk than she’s let on, but considering we’ve seen her demonstrate the moral flexibility of a contract killer, this seems unlikely. Is she playing some sort of long game? Why even try to pin the butterfly problem on Chris in the first place? Is there more to the butterfly invasion than she ever let on?

The real test of her character, on this series at least, is her response to Adebayo’s actions. Up until now, we assumed she’d sacrifice her own children to her cause. Now, we will actually see it. It’s probably a good thing Adebayo is as accomplished at the work as her mother, though. She may need those smarts to survive whatever comes next. 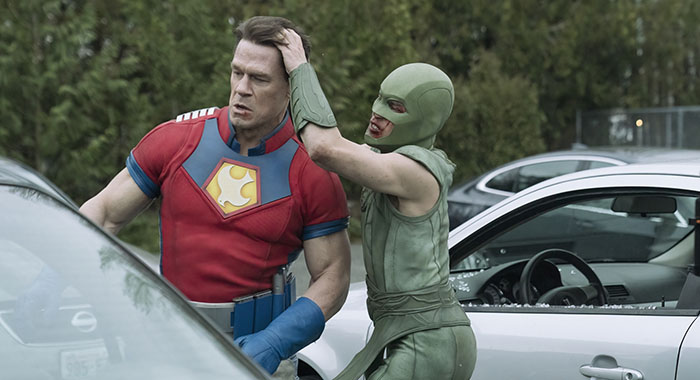 Like Peacemaker and The Question, Judomaster (Nhut Le) is also a Charlton Comics carryover. His Watchmen counterpart — to an extent – is Ozymandias and it seems Gunn is determined to keep him and Chris in conflict for a good long while.

As revealed in the finale, Judomaster joined the butterfly cause because he believed humanity could not course-correct on its own. The coming ecological disaster could only be avoided by a secret invasion. Considering Chris listened Goff’s appeal at the end, we imagine Judomaster is also a person with a good heart. Nevertheless, he will interpret the death of the cow and all those butterflies in exactly one way – and he will be determined to sweep Chris’s legs in response.

Nevertheless, costumed heroes eventually partner-up no matter how many times they fight each other. So that is also a possibility. After a good fight, of course. 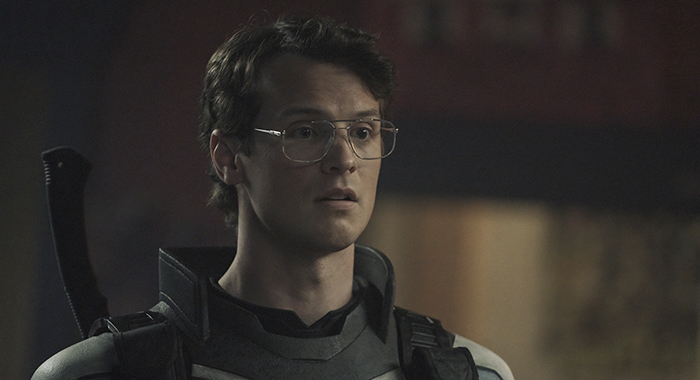 Peacemaker is such a successful examination of its title character that we’ve started referring to him as Chris, much like the characters in the series did. He’s less caricature and more character now. A deeply flawed human who falls back on juvenile barbs and violence, to be sure, but much more dimensional that he was in The Suicide Squad or even in the early episodes of the show.

Vigilante, meanwhile, is not yet “Adrian.”

Like the way the first season dug deep into Chris’s history and trauma, a second season could give Vigilante that sort of depth. Sure, he’s fun as pure, misguided (and misunderstanding) id, but Gunn’s strength as a superhero storyteller is in taking these costumed silhouettes and rounding them into characters you want to watch. Yes, even Drax (Dave Bautista) after he discovered humor.

But to be honest, we just want to know what made Vigilante this way. Back in the comics, his origins are similar to the Punisher’s. In the Arrowverse, Adrian Chase (Josh Segarra) blamed Oliver Queen (Stephen Amell) for all his troubles. This Vigilante, with his willingness to follow the leader and his impressive ability to miss the point, is a character worth exploring – particularly as Stroma’s charm as an actor makes Vigilante’s more irritating traits an invitation to learn more. 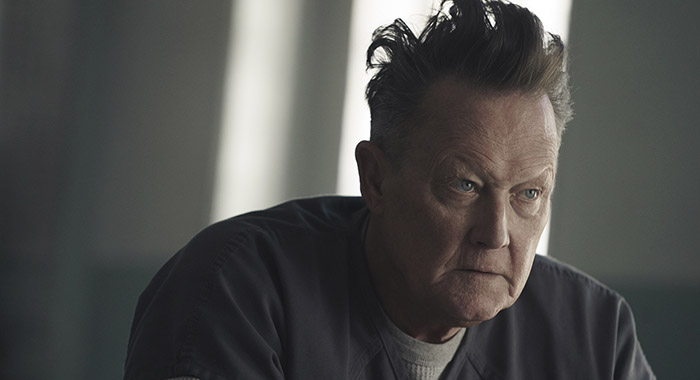 And though there will presumably be room for deep-dives into the other characters, Chris’s emotional journey isn’t over. Just look at the way the specter of his father, Auggie (Robert Patrick), invaded his consciousness despite being dead. His unheard laugh in the finale’s last moments is far more chilling than anything he said in the last two episodes.

Is it a legit haunting? The DC Universe is wild enough for such a thing. But it is also possible this is Chris’s way of externalizing his grief. Sure, he had to kill his father in that moment – and his father was one of the worst people alive on the DCEU Earth – but considering how much guilt he still feels for killing his brother, Keith, his father’s status as the White Dragon may not be enough to override the sense that, maybe, it was wrong to execute him. Chris’s emotional arc is going from a remorseless killer to a more fully realized person capable of regret, after all.

While we’re considering Chris destroying his own family, there is one other old saw of the comics that could occur in Season 2: Keith could be alive. The presumed-long dead sibling is a staple of superhero storytelling and it could complicate Chris’s life in unexpected ways. At the very least, it could be Auggie’s last joke on his son. Imagine all the years he spent berating Chris for being the weak and killing his brother while fully knowing Keith was out there.

Laying Down The L.A.W. 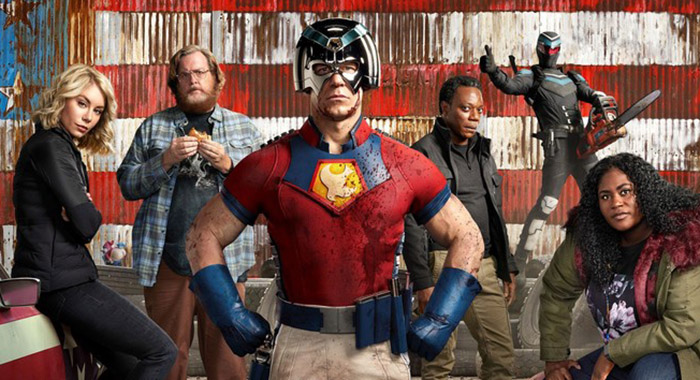 Another hallmark of Gunn’s superhero tales is the building of found families. The Guardians became one and the Butterfly taskforce was well on its way to accepting their strange kinship – just look at Economos fondly regarding the picture Harcourt took of the team rocking out as evidence.

But superhero families need branding (beyond “11th Street Kids”), and we think we found one that is available: “The L.A.W.”

Published from the latter part of 1999 to early 2000, The L.A.W. was a six-issue miniseries by Bob Layton and Dick Giordano that reunited the Charlton superheroes in DC Comics continuity. It saw The Question, Peacemaker, Nightshade, Judomaster, Captain Atom, and Blue Beetle pressed into service by Sarge Steel (also a Charlton hero), the president’s senior advisor of Metahuman Affairs, after the total disappearance of the Justice League. While not the biggest splash in comics, it is notable for giving the Charlton heroes a second chance at being a team.

This is the sort of history Gunn loves to use. Also, with a Blue Beetle, Jaime Reyes (Xolo Maridueña), getting his own HBO Max movie in the next year, a crossover is always possible. But, to be honest, we’re more interested in this concept for Gunn’s take on The Question, Nightshade, and Captain Atom.

There is a problem, though. Four additional superheroes would push Adebayo, Harcourt, Economos, and Vigilante out of the way. But maybe that would be the point. The L.A.W. (short for Living Assault Weapons) could offer Chris some of the legitimacy he craves. That would be a true test of his newfound sense of friendship. Or, alternatively, it could just be a name he applies to his friends even if the others are not living weapons.

Of course, these are just a few possibilities for a second Peacemaker season. We fully expect Gunn to surprise like he did in the first with his character selection, writing, and ability to make joke characters deep and engaging.