Severance: What To Know About Adam Scott and Ben Stiller's New Drama

Star Adam Scott and the Severance team on why this trippy and highly stylized streaming series resonates during the Great Resignation.

In the age of the Great Resignation, Sunday Scaries, and work-life balance comes a show with a simple premise: What if you could create another version of yourself who clocked into work each day, did what was required and then left? That version, or an “innie,” got all the perks of office gossip, waffle parties for making quotas, and a separation from any knowledge of drama in the outside world, including what life was like for their other half. You, the “outie” got the autonomy to live your life (and spend your paycheck) without worrying about what was waiting on your desk on Monday morning.

Welcome to the world of Apple TV+’s Severance — a highly stylized world directed by executive producer Ben Stiller and Aoife Mcardle, created by Dan Erickson, and starring Adam Scott that creates a job that sounds pretty peachy if you’re not the one trapped at work for all eternity. 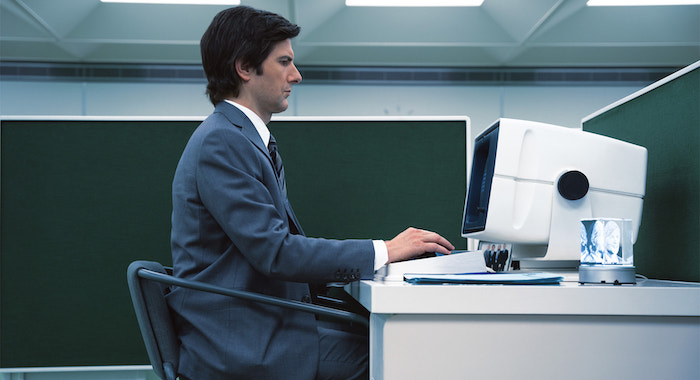 Ahead of its premiere on February 18, we’ve broken down what you need to know about this complex series — although it might also be something you’d want to check out after you’ve seen it because you will have questions (especially if you’re reading this at work when you’re supposed to be crunching those numbers). 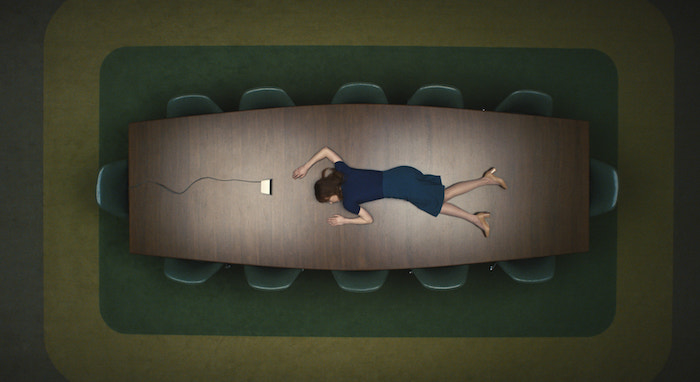 In Severance, for a myriad of reasons — a steady paycheck, a need to compartmentalize, etc., etc. — people choose to have their brains “severed” to create two versions of themselves: One who has a normal life in the outside world and one who is only activated after an elevator ride to the basement of a major, possible sinister, company called Lumon. Scott’s Mark, a former history professor, signed up for the gig to cope with the grief over his dead wife.

The first day of work starts with you waking up on a conference table with your personal memory wiped, as Britt Lower’s Helly discovers. Work shifts are staggered so that no one sees anyone coming and going so there’s no way to know what your co-worker’s life is like on the outside world.

“It’s almost two halves of one person or two different parts of one person,” Scott recently explained to Rotten Tomatoes, adding that “the guy on the outside, of course, has 40-odd years of life experience of sorrow and joy. And he’s grieving his wife, who died a couple of years ago. There’s a lot going on to the point where he’s escaping for eight hours a day so he doesn’t have to feel those things; [whereas] the guy on the inside, for all intents and purposes, is like two years old.

“He has his own circumstances; his own spaces that he’s become comfortable in which he is doing this work in a place that he doesn’t understand, but doesn’t want to understand and isn’t particularly curious about what he’s doing here,” Scott said.

Wait. So This All Happens Via Elevator? 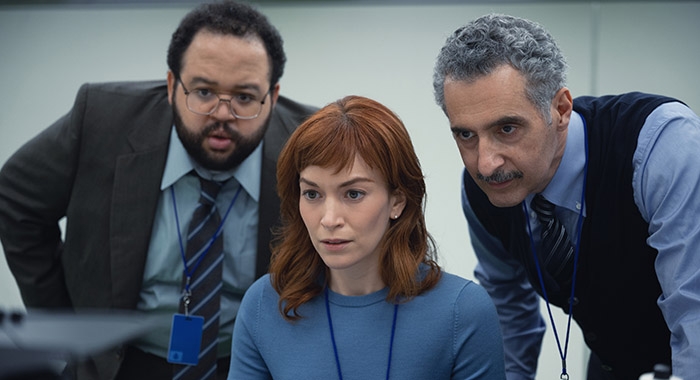 Erickson, who developed this story on spec while working a job he hated, said they left everything intentionally vague. He told journalists during the show’s all-virtual Television Critics Association press day earlier this month that “suffice it to say, there’s some sort of a barrier that if you’re basically halfway down the elevator, you pass it … and it sends a frequency in the chip in your head that causes you to switch to your ‘innie’ mode and then it just comes back up when you’re going home.”

The location is also vague. Erickson laughed during TCA that “we’re clearly in the well-known U.S. city of Kier.”

“We intentionally kept a lot of ambiguity to the time and place,” he added. “We obviously shot mostly in New York [and] in New Jersey, so there’s sort of a vague New England, East Coast-y feel to the city. But we didn’t really want to know exactly where it was or tie it to a specific locale.”

Nor are Helly, Mark, or their teammates — John Turturro’s Irving and Zach Cherry’s Dylan — even entirely clear as to what they do there. Their jobs seem to be to look at computer screens until they see number patterns. And they’re also not the only people who work in the basement; other people with severed brains work in various departments, such as Christopher Walken’s Burt.

“It’s world-building because it’s this corporate culture of this company that has these deep roots in America that’s been the 19th century,” Scott explained to Rotten Tomatoes, adding that “it’s kind of one of those companies that’s ever present. It’s been around forever — where you’re like, ‘Wait, they make my cereal and my air conditioner?’ — and they’re dabbling in technology now.”

And All the Innies Are Just OK With This? 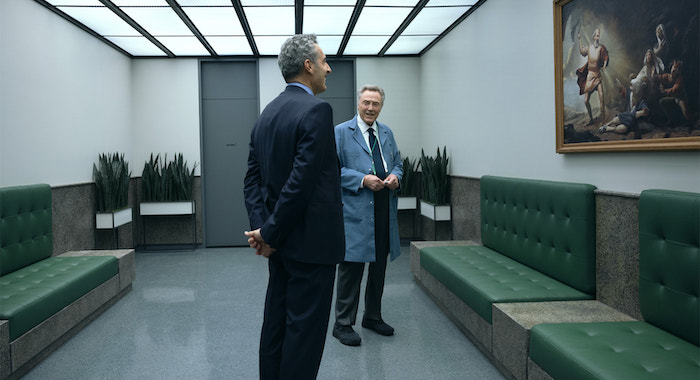 Turturro told Rotten Tomatoes that in developing Irving, a desk warmer who has been passed over for promotion, it was decided that “he comes from a very discipline world and team-oriented world. But obviously, everyone has a longing and feelings and the need to connect with another human being, and you see that it’s sort of like a volcanic eruption that happens so that he gets overwhelmed.”

It’s also a claustrophobic environment not everyone adjusts to immediately — which is shown through Lower’s Helly.

“Severance is about this very human desire to want to compartmentalize parts of our lives, whether that’s work, or grief, or a part of yourself that you’re at odds with,” Lower said during the TCA panel. “And what really struck me about the role of Helly is that she really becomes her own worst enemy in this series … And I think the core question is does forgetting about the painful parts of life or the parts of yourself that you don’t like for half the day, does that make life better or worse?

“I think Helly is operating as kind of avatar for the audience: understanding what it’s like to have the severance procedure, to have no clue who you are and to immediately be in this place that you’re like — she immediately knows she’s got to get out of there,” she added.

But an innie has never tried to rebel and break out before? Turturro told Rotten Tomatoes that “I don’t necessarily think that’s true. Just because you don’t see that when she starts to say, ‘What the hell what does this all mean?’ We’re all kind of taking that in because we’ve had our own experiences too. So I don’t necessarily think that’s true. That’s just what we’re seeing in store, you know, but obviously, they’re all different people.”

What’s a Bad Job Without a Bad Boss? 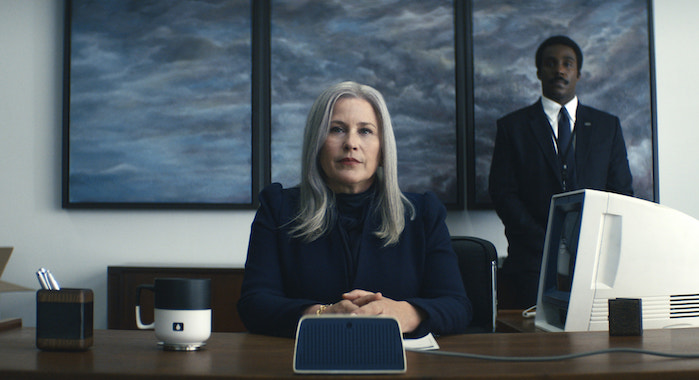 Plus, it’s not like a place like this wouldn’t have draconian overlords. In this version, there’s boss lady Peggy (Patricia Arquette), and her enforcer with an appropriate evil mustache and disturbingly large smile, Tramell Tillman’s Milchick.

“The note that I got about Milchick was that he is an enthusiastic man,” Tillman told Rotten Tomatoes, revealing that he worked with Stiller and Erickson to develop a backstory for his character. Plus, like everyone, Tillman has had jobs he hated and said “there was some inspiration from some bosses.”

Arquette pointed out that “we’ve also lost a lot of our autonomy as people, and we’re now working 24 hours a day” thanks to digital technology and smartphones.

There is “this idea of this corporation and the structure where it knows what you’re doing,” she told Rotten Tomatoes, “and there are strict rules, but somehow you’re always breaking those rules but you’re not even aware of it. And you’re being judged constantly by the corporation, or the employer or the business or the whatever it is.” 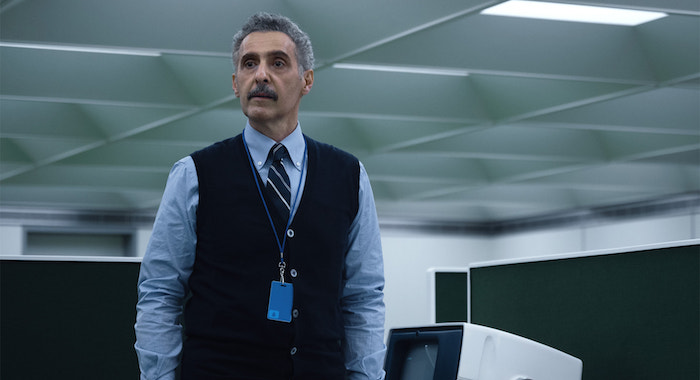 The actors also recognize the Orwellian idea of a show where a Big Brother–like character is watching and controlling your access and freedom.

Turturro has worked in the Soviet Union and says “it really reminded me of it” because of “the totalitarianism; the approach of how people’s initiative has been taken away from them and they’re devoid of that.”

It’s also an idea that’s been explored in shows like Netflix’s Black Mirror, Prime Video’s Homecoming or even Starz’s Counterpart.

“I do think there are some similarities there and in working at this place where you’re not really sure what’s going on and what you’re told is different than maybe what really is going on and sometimes you hear one story and then you hear a different story,” Cherry said.

How Long Can a Story Like This Go On? 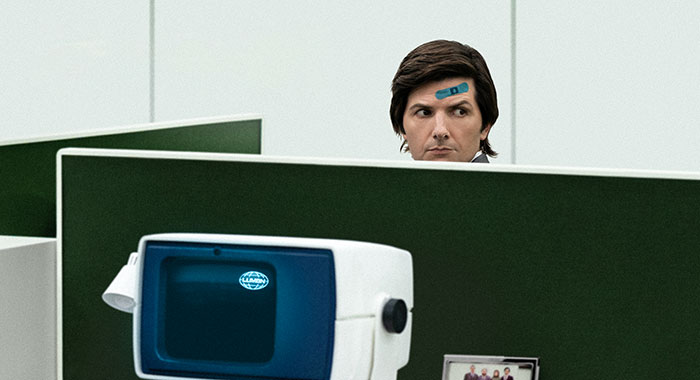 The final episode doesn’t seem close-ended like it would for a limited series.

Speaking at TCA, Erickson said, “Honestly, I think that it is a story that I initially thought of … as a limited series and, as time went on and you just thought about sort of the endless applications for something like this, I think it became clear to me that this is a world we wanted to take our time and explore.

“We’re in such an insular space here,” he added, “but thinking about … how this technology affect other things [like] dating, relationships, education, religion, the military; all sorts of things.”