What to Know About Locke & Key Before You Watch

The series producers and stars talk about adapting the beloved comics, the changes made, and the source material's three pilots.

Netflix’s Locke & Key took a long road to become a series. Based on the acclaimed comic book series by Joe Hill and Gabriel Rodriguez, it tells the tale of a family shattered by tragedy who move to Lovecraft, Massachusetts, only to discover their ancestral home is a place of magic, demons, and unresolved history. Published from 2008 to 2013, it was a smash for publisher IDW and quickly earned the interest of television producers.

In 2011, a pilot was produced for the Fox broadcast network which failed to go to series, but was warmly received when it screened at Comic-Con International: San Diego. After that, it spent some time as a feature film project before executive producer Carlton Cuse (Lost) got a hold of it in 2017. A pilot episode, produced for Hulu in 2018, would receive the same fate as the Fox pilot. The project soon moved to Netflix, where The Haunting of Hill House’s Meredith Averill came on board as a co-showrunner, and a third pilot was filmed. But as Cuse told Rotten Tomatoes, the program needed that near-decade in development to strike the right tone even as the material inspired him to keep at it.

“The impetus to continue to work on this just came from a love of the comic,” he said. Reading it when first it first debuted in 2008, Locke & Key quickly became one of his favorite comics ever. “[Joe and Gabriel] pulled off the near impossible, which was to do something that was emotional and heartfelt but also really genre. And it felt fresh. It didn’t feel like it was the derivative of like 20 other things, which they very easily could have done.”

The mix of genres and tones made it something special and something worth shepherding through two development cycles and two streaming platforms.

“There’s horror, there’s fantasy, there’s magical keys, there’s a murder mystery, there’s teen drama. And trying to sort those all out and kind of calibrate them and put them all together and make them all work together was something that’s hard to do,” Cuse said.

“It doesn’t fit into a box,” Averill added, “which I think is what’s made it difficult and a challenge to adapt, but also what makes it so special and unique.”

Cuse credited Averill with helping him “finding a shared vision for how we wanted to do the show.” At the same time, he considers the long development something akin to the way many TV shows begin.

“Just in the same way that if you make a pilot, you’ve made calibrations and readjustments [for its eventual series], we tried to learn lessons from the previous iterations,” Cuse said.

Those lessons led Cuse and Averill away from the more grotesque horror elements – though some of that still occurs – into a series which leans more into the family and fantasy aspects of the comic book. Averill said it was a conscious decision to avoid the graphic horror because “once you go there, there’s sort of no going back once you’ve set that tone.” Also, she noted the material does not have to be gory to be scary.

“There are other ways to get there,” she said.

And the other ways the television series gets to some of Locke & Key’s ideas may surprise readers of the comic the most. Elements barely hinted at in the initial two stories become important touch points in the program’s first season. Character relationships are refocused and, perhaps most unsettling for some fans of the comic, the town of Lovecraft is now Matheson – a reference to horror and sci-fi writer Richard Matheson, who also worked in television and saw his stories adapted into films like I Am Legend and The Box. 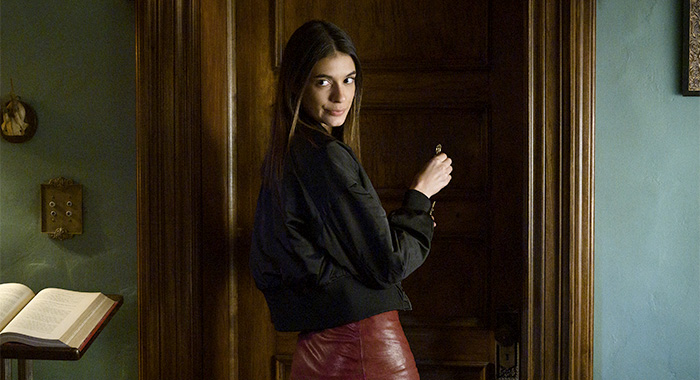 As both producers pointed out, bringing a comic book to television is an exercise in “adaptation, not translation.”

“I think that we were so fortunate to get the freedom to remix from Joe Hill himself,” Cuse revealed. “I mean Joe was an active participant in our creative process. He co-authored the pilot. We had a lot of conversations with him all along the way. And his comment was, ‘Just doing a literal adaptation of my comic would be boring.’ And so he liberated us to not be afraid to really follow our creative instincts and desires.”

Those instincts often led the team to bring ideas from later in the comic into the forefront of the show for the sake of clearly delineating character ambitions. In the case of Dodge (Laysla De Oliveira, pictured), whose motivations are a mystery for some time in the book, Averill felt it was important to reveal the character’s true nature and objective as soon as possible. She was also pleased by the way it dovetailed into stories of the Locke family in Matheson.

“I think it’s a really nice reveal for our kids when they discover that what’s happening to them now has to do [with Dodge],” she said.

Other changes, like the Locke family initially living in Seattle instead of San Francisco were for “aesthetic” reasons and often suggested by Hill himself, who Cuse said was fascinated with the process and used the opportunity to make changes to his world. This is also the underlying reason Lovecraft became Matheson.

“He just wanted to pay homage to Richard Matheson who had died recently,” Cuse explained. 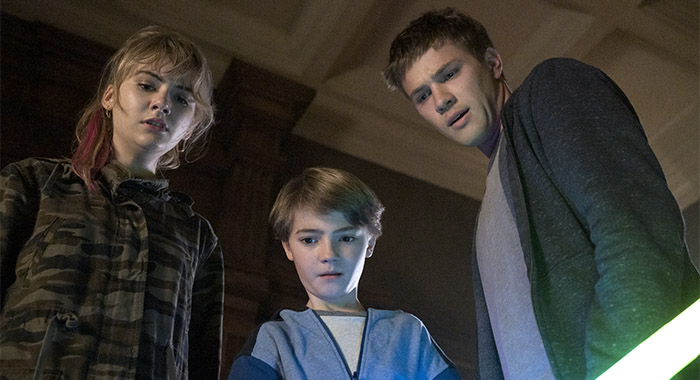 Connor Jessup, who plays oldest Locke son Tyler – and who came to the series with the Netflix iteration – felt the long development and remixing of ideas aided the show it getting to the core spirit of the comic.

“I think [it’s] about growing up through trauma, essentially,” he said.

As a result, the show feels more of like a fantasy adventure to him than the gothic horror he saw in the comics when he sat down to read them.

But part of Locke & Key’s magic, both as a comic book and as a television show, revolves around the way it transforms into different genres with each scene and combination of characters. This was part of the appeal for Darby Stanchfield, who plays the grieving Locke matriarch Nina.

“It’s almost like three different layers wrapped up in one,” she said.

Of those layers – the fantasy, the mystery, and the family – Stanchfield felt from talking with Cuse and Averill that the family aspect was the most important. The Lockes have been thought a lot when we first meet them and their first few months in Matheson are no easier. Nevertheless, the Lockes’ bond endures and, to Stanchfield, forms the heart of the show.

“Which to me really extended to the heart of the kids and their high school friends,” she added.

In perhaps one of the bigger departures from the initial comic book storylines, a group of high school kids called “The Savini Squad” — in honor of horror effects make-up legend Tom Savini — become prominent in the story very quickly, which was another one of Hill’s ideas for the show. Cuse said their appeal became apparent thanks to the iteration process.

“It just seemed like, OK, this is going to be a big part of the show,” he said. “We should meet them in the pilot, we should get going with this.”

The group, which quickly adopts Kinsey Locke (Emilia Jones) into their number, will no doubt become fan favorites. 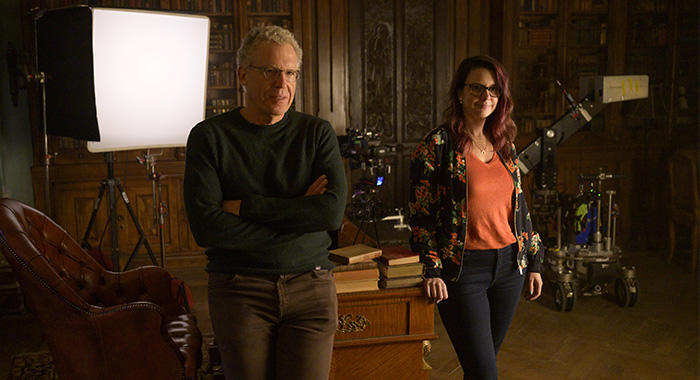 No matter how the show will be perceived, though, its curious production history will always be a part of its story. For Stanchfield and Jessup, taking over roles cast twice previously was something akin to taking over a part on stage. Nevertheless, there was some trepidation about watching the earlier versions.

“At one point someone asked me if I would be interested in seeing the Hulu version of it, which was the previous version. And it unlocked like an enormous terror in me,” Jessup said. “I mean I’m sure they did a beautiful job, but the thought of seeing someone else in the same situations still makes my skin — I feel so uncomfortable about it.”

Stanchfield also avoided the other pilots, but part of her decision to do so was on instruction from Averill and Cuse (pictured), who saw through her initial performance as Nina a new way to develop the character.

“We like your approach and we want you to just go with that,” she recalled them saying.

That difference in the character will be immediately apparent to readers of the comic, but Nina’s underling problems will eventually surface.

In fact, the unexpected way Locke & Key utilizes its source material may earn it a special place in viewers hearts — provided fans of the comic see the value in the ways it is not a literal translation.

“I hope the people who like the comics also like our show and that they are open to the changes and that they’re excited by and surprised by some of the things that we do differently,” Jessup said. “For me it’s always more exciting [that way]. I mean, I love the comics too, and I wouldn’t want the show to try and be a cheap shadow imitation of it. I think it’s better for the comics and for the show if it tries and finds its own language.”