Westworld’s James Marsden on the Season Finale, Season 2, and That Gatling Gun 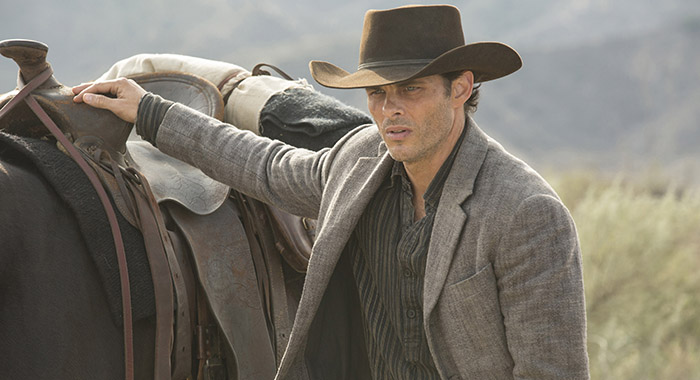 The season finale of Westworld is finally here, and for every question it answers, it will probably raise three more. The good news: HBO renewed the series for a second season.

James Marsden, who plays the show’s earnest cowboy Teddy, spoke with Rotten Tomatoes about his hopes for the season finale and beyond. The cast can’t give away any spoilers, of course, but Marsden’s hints about what’s to come are the perfect tease.

Last week’s episode, “The Well-Tempered Clavier,” was deadly for Teddy. He learned that he was — in one narrative at least — a sheriff slaughtering innocent townspeople in the streets, before being stabbed in the gut himself. As we know, Westworld’s hosts can just wake right back up at the beginning of their narratives. This isn’t Teddy’s first death; in fact, the promo for the season finale shows Teddy riding the train into town yet again, and another shot of Teddy in sleep mode with Dr. Robert Ford (Anthony Hopkins). 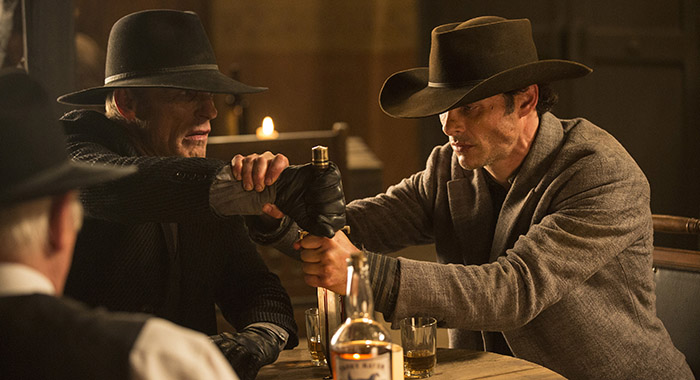 Fred Topel for Rotten Tomatoes: Teddy’s come quite a long way from riding on the train to see Dolores, hasn’t he?

James Marsden: Yes, it’s gone by really quick, but it hasn’t been without really rich, dense story, which hopefully people are enjoying. As far as I can see, they are. Yeah, it feels like it started yesterday.

RT: When Teddy changed his narrative, was that a big shift for you?

Marsden: It was. We were kept relatively out of the loop as far as where the story was going. We would get scripts in time, but sometimes not until a couple days before, so we never knew where our characters were going and what was going on with them. There were conversations and Jonah [Nolan] and Lisa [Joy] were always very open to listening to us fire away our questions. “We just want to know what we’re doing when we’re there on set and what you want from us and what you want to see.” 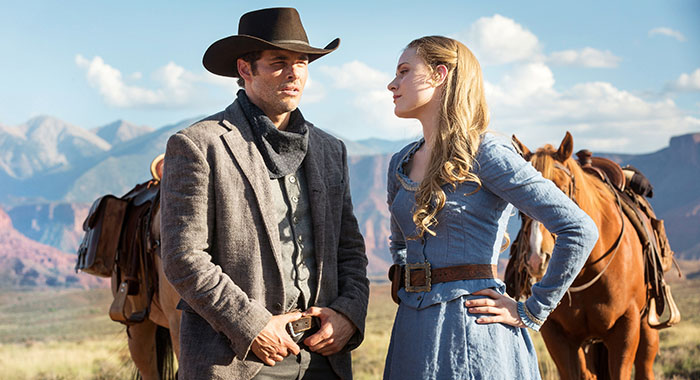 There was a conversation between Evan [Rachel Wood] and I three-fourths of the way through. We went, “Wait a second, we as actors are hosts. That’s us. We’re given a narrative. We play out this narrative for other people’s entertainment, and they yell cut. They reset us, and we do it again.” [Laughs] But it was a great shift for the character in that it gave him some depth and some story line that has not been fully revealed yet. It’s always great when there’s a lot more under the surface.

RT: What were some of your questions for Jonah and Lisa that have been answered so far?

Marsden: Even the actors were theorizing about what the big reveal was going to be. Who is this Wyatt character? Are any of the humans hosts? So I think the big drop so far as been Jeffrey Wright’s character, which gave him a brilliant, complex myriad of emotions to experience. That was one of the bigger ones. There was a little one for me at the beginning when you’re setting it all up, that I was supposed to look like a guest and then it was a gotcha. He’s a host.

There were little ones like that, but I think the show is very ambitious. It asks a lot of the audience to come along with them and pay attention. I think it’s very rewarding when you do. I can’t really talk about any more specific drops, even the ones that have happened. There’s so much more underlying meaning behind and underneath so many of these things that I’ve learned to never speak in true absolutes on the show. 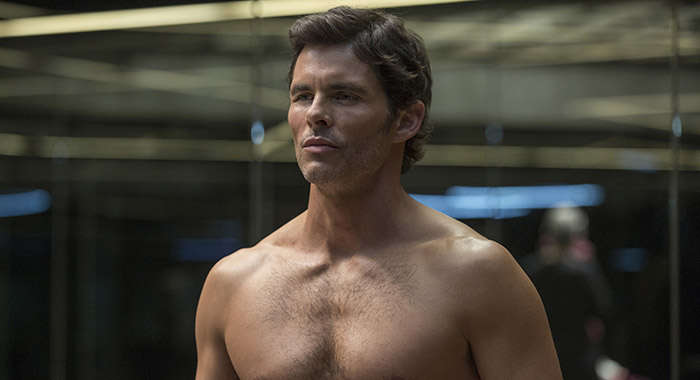 RT: How much is Teddy in the finale?

Marsden: I can’t really talk much about the final episode. It’s a big hush-hush, under-wraps thing. I will say when I read it, my eyes rolled backwards in my head. It’s some of the best writing in whatever format ever. When the puzzle pieces come together, it’s like Oh, God. I was walking around my house for about an hour without saying a word with my mouth open. I think you’ll probably see a good deal of everybody in the finale.

RT: Has any role you’ve played before given you as many questions as Westworld?

Marsden: Yeah, in different ways, I guess. Some roles you approach with the understanding that you’re actually playing a human being who you may or may not relate to. That said, our approach to this is actually one and the same, which is “Let’s forget what their internal organs look like, and let’s present them to the audience as real people, and let’s make them indistinguishable from humans.”

I guess where it gets tricky is when you’re having to navigate the different modes of analysis. Am I in full diagnostic mode where I’m just spewing data? Or am I still in character, but I’m not hearing everything he’s saying? There’s all these different modes they get put in, which was also fun for an actor, just to jump from one to the other. Evan and Thandie [Newton] have done that brilliantly. 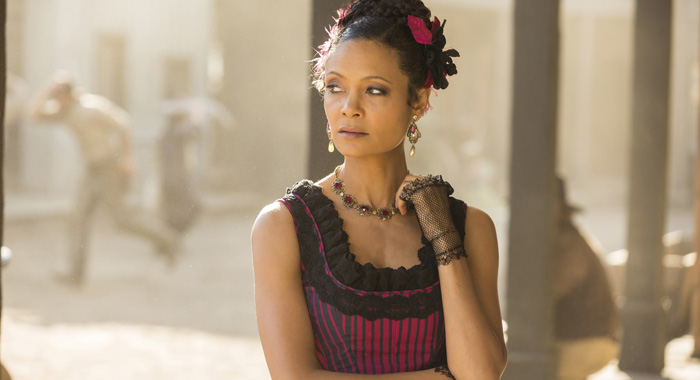 From that sort of technical standpoint, it was challenging, but then in addition to that, it’s really just not knowing where you’re going. When you read a film script, you get the ending. With this, this is definitely esoteric and riddled with mysteries which I love, so that was one of the challenges: going, “Where am I going? Where is Teddy going? Where does his journey end, and what is his endgame?” That’s for everybody really. Am I being vague enough for you?

RT: Yes, I get it. What are your hopes for season 2 of Westworld?

Marsden: My hope for season 2 is that whatever evolution is happening, whatever movement in whatever direction is taking place, that continues to accelerate and crescendo. That’s it, and I mean that by the feel of the show. I mean that by what we see happening with Thandie and Evan. We’ll see. Jonah and Lisa are very good about mapping things out. Nothing is by mistake or accident. It’s all very meticulously plotted. There’s part of me, the fan of the show, who doesn’t want to know. But I can only imagine, having read all 10 episodes, where this will go and it’s very exciting. 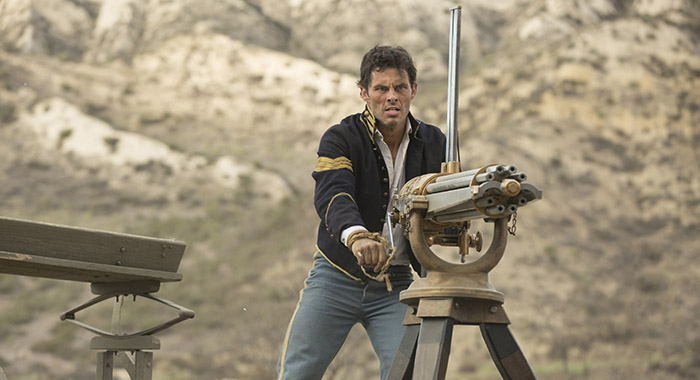 RT: Was playing with the Gatling gun cool?

Marsden: Yes with the exception of the fact that on one take, it fell over and almost landed on me. I think I swung it a little too hard. That’s a big heavy 400 lb. piece of metal, so that was a little scary, but no one got harmed, and they made sure that didn’t happen again. Yeah, it was very fulfilling, like if I was in Westworld getting to do this as a guest, this would be a lot of fun.