Of course Dom was going to save the global box office! Plus: A Quiet Place Part II continues its hot streak, last week's winner plummets, and more from the weekend box office of June 25-27, 2021. 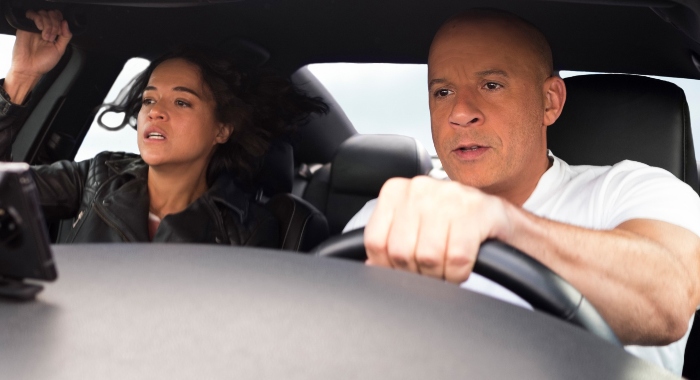 Going forward it seems that every time a select potential blockbuster is on the horizon, we will all be looking at it less as just another pandemic record-breaker, but a sign that the doors to normalcy are opening wider. We did it back in March with Godzilla vs. Kong, and saw further hope in the opening and continuing numbers of A Quiet Place Part II. Now it is The Fast Saga’s turn to step up onto the scale and see how it should be measured.

King of the Crop: F9 Fuels the Biggest Box Office Weekend Since February 2020

The latest film in the saga (the ninth that is actually the tenth), F9, grabbed the record this weekend for films opening during the pandemic with $70 million from Friday to Sunday. We’ll see if that is a rounded-up estimate. Whether it is or not, it is the best number 1 haul at the box office since The Rise of Skywalker’s second weekend ($72.3 million on the weekend of December 27-29, 2019) and the overall box office had the strongest three-day weekend since President’s Day weekend last February. This is no doubt good news as this is a film – even with pandemic asterisks – that should have opened to over $60 million. Anything less than that – even above A Quiet Place Part II’s three-day holiday weekend haul of $47.5 million – would have been considered a hollow victory. But it got over that hump with a $7.1 million gross in Thursday night previews and $30 million on Friday. Amongst past films that grossed between $6.5 million and $7.5 million on Thursday previews, the lowest full weekend earner was Jordan Peele’s Us with $71 million. (Fast & Furious 6 is among that small group and opened to $97.3 million after $6.5 million in previews.)

There is no question that The Fast Saga is one of the biggest franchises of all-time: Over $6 billion and counting with more than half of that attributed to the last three films (not even counting Hobbs & Shaw). Furious 7 is the ninth highest-grossing film worldwide of all-time and The Fate of the Furious is 19th. F9 has made over $404 million worldwide so far. However, domestically, the grease is starting to come off the wheels a bit for the franchise. For all its international success, Fate grossed $127 million less than the seventh movie, and then Hobbs & Shaw made $53 million less than that; that spin-off finished its run just shy of $174 million and was considered somewhat of a disappointment at home. Bringing in those pesky pandemic asterisks again, we still have not seen a film hit $150 million in the pandemic period. The lowest-grossing film to open between $65 million and $68 million is X-Men: Apocalypse, with $155 million total. However, F9 is not going to be judged against the poor word-of-mouth of that film, nor against the Vin Diesel-less Hobbs & Shaw. We are back to Diesel solo here with no Dwayne Johnson to draw in fans of his Hobbs character. So we may be back to looking at the fourth entry, Fast & Furious, as the first hurdle F9 wants to clear. a film that also just happened to finish with…$155 million. Start your engines.

Rotten Returns: Hitman’s Wife’s Bodyguard Not Much Of a Hit

Last week’s The Hitman’s Wife’s Bodyguard, which has a Tomatometer score of 28%, took a dive this weekend – all the way back to second place with a near 60% drop to $4.8 million. That puts it just marginally above where the Child’s Play remake was in 2019 when it grossed $4.42 million in its second weekend for a 10-day total of $23.5 million. That film sunk even further and only finished with $29.2 million. Bodyguard is up to $25.5 million, so should outgross that, but may only be headed for somewhere around $35 million total, or half of what the original did. Not a good number for a film with a budget reported to be somewhere between $50 million and $70 million.

The Top Ten And Beyond: A Quiet Place Part II Still the Big Winner of the Pandemic Box Office As Cruella Shows Its Legs

The current champ of this box office era, A Quiet Place Part II, continues to draw in crowds. Remaining in second place again this week, it grossed another $6.2 million, raising its total to $136 million. That is roughly the same amount Baz Luhrmann’s The Great Gatsby had after a full month of release; that film made $6.5 million in its fourth weekend, but then began to drop sharply and finished with over $144 million. A Quiet Place Part II is likely to remain in the top five for the next two weeks and could find itself making a real push towards $150 million. It stands at over $248 million worldwide.

The horror sequel’s Memorial Day weekend competitor, Cruella, has held up pretty well over the past few weeks. We had it pegged for somewhere around a $70 million finish and after another $3.7 million this weekend it stands at $71 million. A final tally in the $75 million-$80 million range is still not much to brag about given its hefty budget, and how many are continuing to spend $30 a pop for Premier Access on Disney+? Even the overseas numbers are only at an additional $112 million. Nevertheless, its haul is proving more impressive domestically than Peter Rabbit 2: The Runaway, which stands at $28.5 million after this weekend. The $79 million it has made overseas will help smooth the books with Sony, but these are all numbers that continue to show families are not flocking back to theaters. The numbers may be why the studio pushed back Hotel Transylvania: Transformania to October where its predecessors have thrived, and which should give those with kids more time to settle back into normalcy. Eyes will be on another family sequel next week, but those numbers will likely be skewed due to its day-and-date streaming option as well.

Over on the HBO Max side of things, The Conjuring: The Devil Made Me Do It fell 42% this week down to $2.9 million. That is slightly more than Annabelle Comes Home, the lowest-grossing film in the Conjuring Universe, made in its fourth weekend ($2.6 million) but it had also banked $64.7 million at this point compared to $59 million for the third Conjuring movie. The new film appears unlikely to hit the $74 million that Home had grossed in 2019. Then we see the continued box office disappointment of In The Heights, which dropped to $2.2 million and has now made $24.3 million total – more or less what many analysts believed it would make its opening weekend.

On The Vine: A Horror Finale, A Cherub in a Suit, and the Twitter Thread That Became an Indie Darling

Next week Universal gives you options for the theater and at home. The family can venture out to see The Boss Baby: Family Business or they can stay in their living rooms and catch it on the Peacock. But if you do need to get out of the house and want to see a movie about people not wanting to end something, then you also have The Forever Purge in theaters, the supposed final chapter of the horror franchise. Also in theaters is the acclaimed Sundance film from Janicza Bravo, Zola, which currently sits at a Certified Fresh 88% on the Tomatometer and is based on a wild Twitter thread.