The week offered a streaming trailer bonanza with looks at some highly-anticipated titles. Plus, that Jeopardy! finish, a Sponge Bob spin-off, and — the return of Punky Brewster?!

Amazon Prime Video offers a first-look at its fantasy about murder and faerie-kind, while Netflix drops Jessica Jones’ final season trailer, and Apple hits us with an alternate-reality space race in Ron Moore’s For All Mankind.

The series also stars David Gyasi (Interstellar) as mysteriously wealthy faun Agreus, who defies the social order; Karla Crome (Under the Dome) as war-refugee faerie poet Tourmaline; Indira Varma (Game of Thrones) as Piety Breakspear, matriarch of the powerful family that rules the city of The Burgue; and Tamzin Merchant (Salem) as Imogen Spurnrose, an aristocratic young woman who looks to Agreus to help turn her family’s fading fortunes around.

Jessica Jones returns in Netflix’s first full trailer for the third and final season, starring Krysten Ritter as the titular strength-enhanced superhuman. Jessica and Trish (Rachael Taylor) must mend their fractured relationship when a highly intelligent psychopath arrives on their scene. Season 3 premieres on the streaming service on June 14.

Other trailers that made headlines this week:

James Holzhauer, the man who has made headlines for a massive winning streak on Jeopardy!, has finally been defeated. Holzhauer’s 32-day winning streak, which has netted him $2,462,216 in prize money, was ended in Final Jeopardy by Chicago librarian Emma Boettcher. His final winnings are just $60,000 less than record holder Ken Jennings, who won 74 straight games in 2004.

DC and the USO Bring Batman to Kuwait

DC Comics teamed up with the United Service Organizations (USO) to celebrate Batman’s 80th anniversary to 12,000 U.S. troops stationed in Kuwait. Artist Jim Lee, Batman writer Tom King, and several stars of The CW’s DC TV shows — Candice Patton and Danielle Panabaker of The Flash and Nafessa Williams of Black Lightning — embarked on a multi-day tour of five military bases where service members were able to take photos with the actors and sit inside the Batmobile. They also caught a sneak peek of Pennyworth, a.k.a. the origin story of Batman’s butler that premieres on EPIX in July.

Everyone’s favorite pineapple who lives under the sea is getting a spin-off: The SpongeBob SquarePants prequel Kamp Koral, which will see a 10-year-old version of the character attending summer camp with his BFFs. While there’s no premiere date just yet, the CG-animated series’ first season will consist of 13 episodes to start.

I have a big giant secret to finally share with you! She is back and I am back too! #PUNKYPOWER ❤️???????

The latest sitcom to ride the wave of nostalgia with a reboot? Punky Brewster, a.k.a. the ’80s NBC sitcom about a spunky young girl raised by a foster dad. Original star Soleil Moon Frye will return as the titular character, now a single mom of three who is “trying to get her life back on track when she meets a young girl who reminds her a lot of her younger self,” according to the official description. 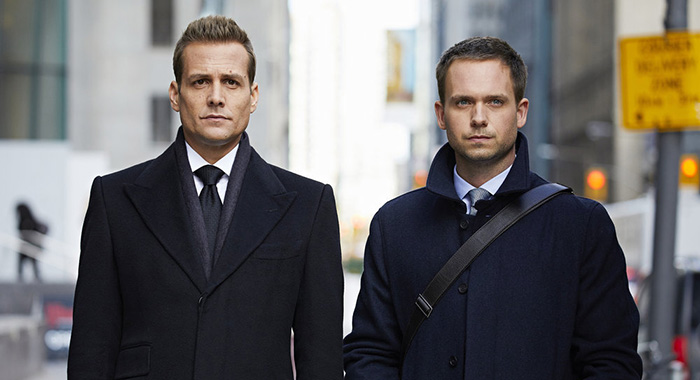 Patrick J. Adams is returning to Suits for the series’ final season, he revealed to Deadline. While he’ll definitely appear in the fifth episode, during which he’ll take on a case that will put him “toe to toe” with Harvey Specter (Gabriel Macht) and Samantha Wheeler (Katherine Heigl), there’s also a chance he’ll be back for the series finale. His TV wife, on the other hand — a.k.a. Duchess of Sussex Meghan Markle — will not be back, but she will be mentioned.

“I couldn’t be happier to be part of the final chapter of Suits. I’ve missed my TV family, and am looking forward to seeing what kind of trouble Mike Ross can stir up at the firm one last time,” Adams told Deadline in a statement. “But if the wardrobe department thinks they’re getting back the suits I stole when I left, they’re going to be very disappointed.”

Joining Cate Blanchett and a cast stacked with all-star supporting performers in the limited series Mrs. America is Elizabeth Banks, who will star alongside Blanchett in the nine-episode FX drama. The series follows the unexpected backlash to the Equal Rights Amendment led by the conservative Phyllis Schlafly (Blanchett). Banks will go head-to-head with the Oscar winner as Jill Ruckelshaus, a pro-choice Republican appointed by President Ford to advance women’s rights.