Today’s Ketchup brings you another ten headlines from the world of film development news (those stories about what movies Hollywood is working on for you next), covering such titles as Akira, The Croods 2, Terminator 6, and new roles for Gal Gadot, Matt Damon and Tom Hanks. 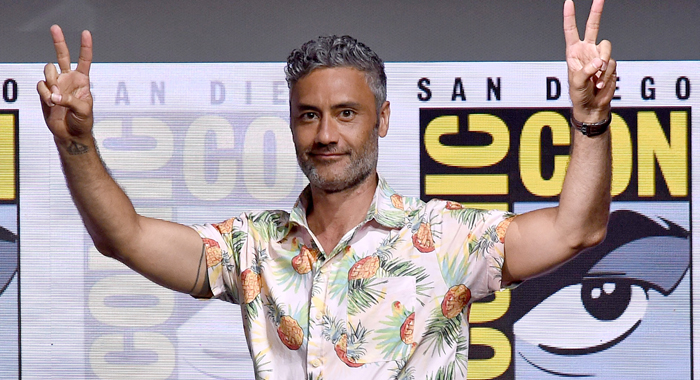 The trailers for this November’s Thor: Ragnarok (11/3/17) promise a colorful, kaleidoscopic adventure hybrid of fantasy, science fiction, and obviously, superheroism. The director responsible is New Zealand’s Taika Waititi (Hunt for the Wilderpeople), and his talent has attracted the attention of Warner Bros., who have long been trying to get a live-action remake of Akira going. Waititi is now in talks to direct an adaptation of the long-running manga, intended to be two films, each adapting three of the classic manga books. The Akira manga was previously adapted as a 1988 anime film which now regularly appears on “greatest movies of all time” lists. Warner Bros.’ ongoing efforts have led to some controversy.

1. THE CROODS SEQUEL IS STILL EVOLVING AFTER ALL

Nearly a year ago, there were reports that DreamWorks Animation had pulled the plug on plans for a sequel to their 2013 animated caveman hit The Croods (71% on the Tomatometer), which was, at one point, scheduled for this coming December 22. Well, fans of The Croods can celebrate again, because DreamWorks has put The Croods 2 back into production. The new release date for The Croods 2 is September 18, 2020, with Nicolas Cage, Emma Stone, Catherine Keener, Ryan Reynolds, and the rest expected to return. DreamWorks has also scheduled an animated Blumhouse movie called Spooky Jack for a year later, on September 17, 2021.

2. TOM HANKS TO STAR IN REMAKE OF SWEDISH HIT A MAN CALLED OVE

There is something of an ongoing “golden age” in publishing for Scandinavian authors like Jo Nesbo (The Snowman), and the late Stieg Larsson’s continuing Millennium series (The Girl with the Dragon Tattoo, etc). Similarly, Fredrik Backman’s novel A Man Called Ove was adapted into a hit 2015 film. Since the release of the film, the novel’s English language adaptation has become a best-seller in the USA. The story, about a curmudgeonly man whose heart of ice is thawed by new neighbors, is about to reach an even larger audience, as Tom Hanks has come on board to both produce and star in a new English-language film adaptation of A Man Called Ove.

As we near the heat of this year’s “awards season,” Matt Damon finds himself starring in movies from two directors associated with 2011’s The Descendants. That film’s director, Alexander Payne, has the upcoming sci-fi satire Downsizing, while its star, George Clooney, directed the crime drama Suburbicon from a screenplay co-written by the Coen brothers. One of Damon’s next films will be called Charlatan, adapting the true story of early 20th century conman John R. Brinkley, as told in the bestselling 2008 book Charlatan: America’s Most Dangerous Huckster, the Man Who Pursued Him, and the Age of Flimflam. Decades before pills like Viagra, Levitra, and Cialis, Brinkley pretended to be a doctor who could cure male impotence by surgically transplanting goat testicles into his unsuspecting patients.

Elisabeth Moss won the Emm for Best Actress in a Drama on Sunday night for her role in The Handmaid’s Tale, and by Monday, she had landed her next major film role. Moss will star in Call Jane, an indie drama set in 1960s Chicago about an underground initiative called the Jane Collective, which provided abortions to women in the years before the Roe v. Wade ruling of 1973. Call Jane will be directed by Simon Curtis, whose previous films based on true stories have included My Week with Marilyn, Woman in Gold, and the upcoming Winnie the Pooh film Goodbye Christopher Robin.

It’s becoming increasingly difficult to find major movie stars who haven’t joined a superhero franchise at some point in their careers. This story, for example, involves DC’s Wonder Woman, Gal Gadot, and Bradley Cooper, the voice of Marvel’s Rocket [Raccoon] from Guardians of the Galaxy. Gadot is in early talks with MGM to co-star in an underwater thriller called Deeper, in which Cooper is attached to star “as a disgraced astronaut who is on a deep-sea dive exploring a newly discovered trench but soon finds himself confronted by a sinister and dangerous force.” We’re calling Deeper a “Rotten Idea” because of screenwriter Max Landis’ long string of Rotten Tomatometer scores, among other things related to Max Landis.

Mark Wahlberg’s 2015 comedy Daddy’s Home (with Will Ferrell) earned a Rotten score of just 31%, and some of the reactions to the Daddy’s Home 2 trailer have been sort of borderline vicious (NSFW). Even so, Mark Wahlberg appears to be perfectly happy with the work relationship with Sean Anders, because he will work with the Daddy’s Home franchise director on another similar “family” comedy. The project is called Instant Family, and the premise involves a couple who decide to use the foster children system to create a family for themselves overnight.

Earlier this year, the news broke that Dave Bautista (Marvel’s Drax) would be joining his Guardians of the Galaxy Vol. 2 costar Sylvester Stallone in a sequel to 2013’s Escape Plan (49% on Rotten Tomatoes). That movie, now called Escape Plan 2: Hades, isn’t expected to be released until sometime in 2018, but Escape Plan 3 has already started filming. Dave Bautista will be returning for Escape Plan 3: Devil’s Station as well, and he will be joined by franchise newcomers Jaime King and China’s Max Zhang.

Director Matthew Vaughn’s new film Kingsman: The Golden Circle (49% on Rotten Tomatoes) comes out this weekend, and so he’s doing all of the usual rounds of press. Speaking to Collider, Matthew Vaughn was asked about his planned remake of Flash Gordon, and he had a surprising reaction. Vaughn said, “For me, the only problem with Flash Gordon is Guardians [of the Galaxy] kind of stole what I would have liked to have done with it.” Matthew Vaughn joined the Flash Gordon reboot in 2015, after the 2014 release of the first Guardians of the Galaxy came out in 2014, so ostensibly, he’s referring to something that happened in Guardians of the Galaxy Vol. 2. Might his plan for Flash Gordon have involved Ming the Merciless being his dad or something? Or was there something more obvious that Marvel “stole” from Flash Gordon?

1. LINDA HAMILTON WILL BE BACK FOR THIRD TERMINATOR REBOOT

When 2015’s Terminator: Genisys barely made more than half its production budget in the USA ($89 million vs $155 million), the second attempt at a reboot seemed to be the end of the Terminator franchise. Even so, talk of a Terminator 6 lingered in the last two years (mostly from Arnold Schwarzenegger). On Tuesday (in an event that was teased online last week), James Cameron announced that he will producing a sixth Terminator movie (the third reboot), which will feature the return of Linda Hamilton and Arnold Schwarzenegger. About 60-year-old Linda Hamilton headlining Terminator 6, James Cameron said, “There are 50-year-old, 60-year-old guys out there killing bad guys… but there isn’t an example of that for women.” We’re calling this the Rotten Idea of the Week based on the Tomatometer scores and box office results of the last two Terminator movies.