If you like your clones off-kilter, Disney+'s new animated series is for you. Star Dee Bradley Baker, supervising director Brad Rau, and head writer Jennifer Corbett give us a primer before the premiere.

On February 21, 2020, the long-awaited final season of Star Wars: The Clone Wars debuted with a curious story; instead of picking up with Ahsoka Tano (Ashley Eckstein) after her decision to quit the Jedi Order, the first few episodes focused on Clone Captain Rex (Dee Bradley Baker) working with Clone Force 99 (all voiced by Baker) to rescue a long-lost Clone Trooper named Echo (also Baker).  The squad, comprised of clones who didn’t grow in the vats quite right, do not follow orders without question, and approach their missions in unconventional ways, much to Rex’s dismay. Little did the fans know, but the story was a dress rehearsal for the next animated Star Wars program: Star Wars: The Bad Batch, debuting this Star Wars Day, May the 4th.

“[Going to series] was more in response to a combination of things because fans got to see the original story reel of the Bad Batch back in 2015 at Star Wars Celebration and there was a great reception [to it],” she explained.

Fans’ enthusiastic response led to featuring Clone Force 99 on Clone Wars once Disney+ picked up that series to complete its overall story and, ultimately, a program of their own.

The new series sees the Bad Batch experience “the transition from Republic to Empire,” as Corbett put it, with the squad — Hunter, Tech, Wrecker, Crosshair, and Echo (now a member of the team) — on the wrong end of Imperial concerns and quickly on the run from faces that are familiar (other clones), but now the enemy. And if you’ve been keeping count, it means the cast is primarily comprised of clone characters, which puts Baker in the position of not only being the series’ star, but the majority of its ensemble. His primary credit on the show: “Dee Bradley Baker as The Bad Batch.”

“I look at [the credits] and I can’t believe it. It’s like nothing I’ve been asked to do,” Baker said.

The voice actor, also popular among fans thanks to his performance as Legends of the Hidden Temple’s narrator Olmec and creature characters like Appa and Momo on Avatar: The Last Airbender, has been the voice of the clones since the animated Clone Wars feature film in 2008. Though based on the voice and mannerisms of Temuera Morrison, who played the clones troops in the Star Wars prequels, Baker quickly became the clone voice thanks to his work as characters like Rex and Echo, who became much more individualized as Clone Wars continued.

“It’s just such a fantastic advancement from everything Star Wars that we were able to do with Clone Wars and to be involved with,” he said. “I don’t think I’ll ever get another assignment like this in my life. As a voice actor, you never see a project like this — maybe once in a career.”

“We wanted to push the fidelity of everything all the way through,” added supervising director Brad Rau, who also serves as an executive producer with Corbett. Though a new show, keeping Baker as the voice of the clones and keeping the overall style of Clone Wars was a very conscious decision on a part of the creative staff to maintain the continuity and visually inform the viewer how swiftly after Clones Wars this series takes place. Although, he noted, “we have clonetroopers in our show, and they’re very similar model to The Clone Wars, but they’re a little bit different.”

One difference viewers may notice in short order: the color-coding and personalized augmentation of trooper gear quickly disappears in favor of the uniform stormtrooper monochrome — a swift change as the clone army of the Republic becomes an Imperial military force.

Rau noted that “just seeing the clonetroopers as the forces of our evil army and how their gear, their vehicles, and their equipment has changed to be a little bit less colorful, less individual” changes the relationship to established Star Wars imagery in a way viewers may not immediately recognize consciously, but underscores one of the show’s themes about the transition to Empire.

“It’s interesting when you take an AT-TE tank, one that we’re used to seeing as a good-guy tank, and just strip it off color and paint it this boring gray, and then we’re playing very evil music as it comes marching down the street. And you think, ‘There’s no doubt, that’s a bad-guy tank,’” Rau explained. 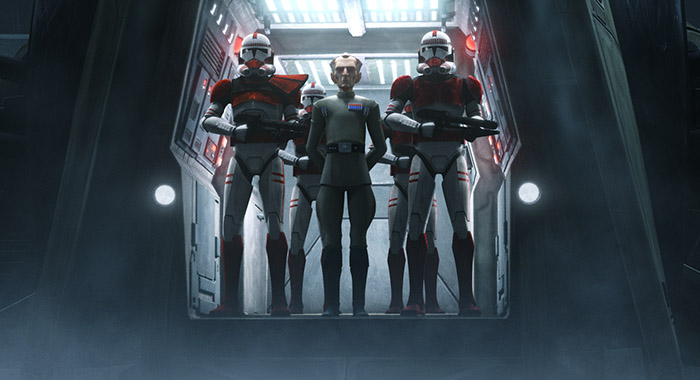 Another sign of the changing attitude with the arrival of the Empire: once the Bad Batch come home to Kamino after the Clone Wars end, they see Admiral Wilhulff Tarkin, not yet the Grand Moff of the Death Star, inspecting the troops and doubting the loyalty of the Bad Batch. The classic Star Wars baddie — played by Peter Cushing in the original film and voiced by Stephen Stanton in his animated appearances — is something of a “big fish” for The Bad Batch, according to Corbett.

“While he’s there to address certain things, I suspect that he’ll be pulled someplace to handle other important matters,” she added.

And once he is called away to those matters (and his destiny aboard the Death Star), a surprising person will take his place in the hunt for the Bad Batch once they make their escape from the Imperial ranks.

Along the way, the Bad Batch also meet a young female clone named Omega (Michelle Ang), whose existence may lead to a new mystery down the road. The character also continues a particular Star Wars animated tradition of introducing kid characters; Clone Wars did the same with Ahsoka and Star Wars Rebels followed suit with Ezra Bridger — to say nothing of Anakin Skywalker’s introduction in Star Wars: Episode I — The Phantom Menace. To Rau, having a child in the midst of the action is key.

“These are essentially shows for kids,” he explained. “As big kids ourselves that still love Star Wars from when we saw it as kids, we never want it to get too dark; although, there are dark things that happen.” 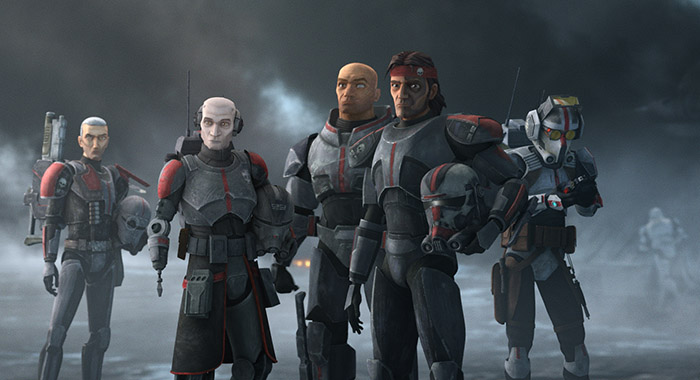 The character also changes the dynamic within the squad itself as it is presented with a new set of challenges the clone creators on Kamino never dreamed they would encounter.

“The things that they teach each other are really, really interesting and help keep [the Bad Batch] on their toes,” Rau said. “They’re not always just hitting the target now [and have to think], ‘Oh, wait a minute. When it’s not a military objective, how do we deal with raising this child? We don’t even know how to deal with the galaxy ourselves!’”

Baker added, “It’s a really wonderful thing to see how quickly some of the Bad Batch warm up to Omega, and it really adds an interesting layer to these kind of gonzo, improvisational, special ops soldiers.” To Baker, who has the strange task of keeping all these characters in his mind simultaneously, the addition of Omega adds “the story of what’s playing out, which it’s not just a matter of war and power, but it is [also] human.”

And playing those humans, er, clones, leads to a unique method of recording for Baker. He prefers to run through the script in order and switch between the Bad Batch characters (and any other clones who might be in the scene) live and on the fly.

“Once the specificity of the characters is nailed down, as it is by this point, it’s actually pretty easy for me to jump from one to the other,” he explained. Although he admitted Wrecker, the demolitions expert with a propensity for yelling, does present some difficulty. “When Wrecker gets excited or starts yelling, that brings a physical cost to the voice that I sometimes have to manage a little bit. But other than that, it’s amazingly easy to do.”

Baker is able to record two or three takes of an entire scene before a pause for notes from Corbett or Rau or for a moment to record specific lines to “rearrange the words or the inflection or the meaning of sentences, or add extra efforts, or modify the presence of voice to match what the blocking establishes.” 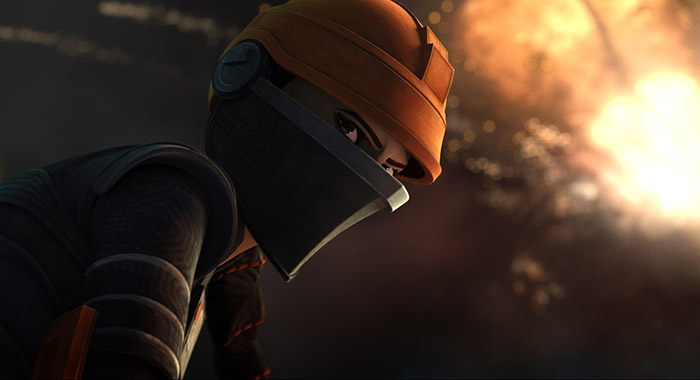 And though the series is a showcase of Baker’s talents, it also retains the imprimatur of Clones Wars and Rebels supervising director Dave Filoni, who serves as the show’s creator even as he continues to chart aspects of Star Wars’ live action television efforts.

“The stuff he tells us is fantastic and amazing,” Rau said. As anyone who has heard him talk can attest, he has a rare gift for explaining Star Wars ideas and concepts.

“It’s a master class in writing Star Wars,” added Corbett, who also called Filoni’s involvement “crucial” in the development of The Bad Batch as a series.

The Filoni stamp means the show is also free to move between lighthearted stories and darker tales just like its predecessors, but with one interesting difference: “It’s a combination [of tones] because it is a dark time, but the fun adventures they get to go on and the places that they visit are different because there’s no war happening,” Corbett said.

Indeed, The Bad Batch is unique in that it occurs during a time of galactic peace. Sure, that peace may be an illusion and comes with some brutal hidden fees, but the Clone Wars are over, the Civil War is a decade or so from truly beginning, and the conflicts of the Mandalorian and Sequel Trilogy eras are undreamed of at this point in Star Wars history. 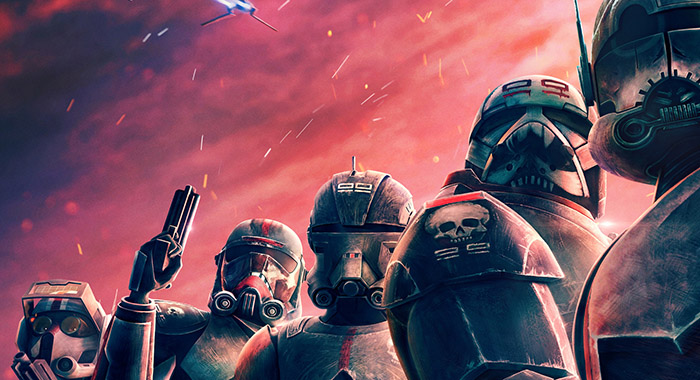 “At least that’s a positive,” she continued. “But there are other things that they’re encountering in the galaxy that are equally as challenging for them.”

Hopefully, those challenges will thrill viewers and keep The Bad Batch on Disney+ until its eventual conclusion, which both Corbett and Rau alluded they have a plan for, but that discussion is for another time — Clone Force 99 and Omega’s journey is just beginning.

Star Wars: The Bad Batch debuts on Tuesday, May 4 with a special 70-minute premiere, followed by new episodes every Friday starting on May 7 on Disney+.