Critics say the couple-on-the-run action-comedy is a little messy, but it's fun, funny, and a great showcase for its talented stars.

One of the earliest movies to be shuffled due to the COVID-19 pandemic, The Lovebirds was transferred to Netflix by its studio, Paramount Pictures, following the cancellation of its South by Southwest world premiere in March. The action-comedy reunites actor Kumail Nanjiani with his The Big Sick director, Michael Showalter, and pairs him with Issa Rae as they play a couple on the run after witnessing a murder. According to the first reviews of the movie, it’s a minor treat because of the romantic and comic chemistry of its two leads, who provide plenty of entertainment that almost distracts from a mediocre plot.

Here’s what critics are saying about The Lovebirds:

How does the movie compare to other action rom-coms?

The Lovebirds truly stands out amongst the rest… with genuine commentary on the ups and downs of relationships and coupledom.
– Britany Murphy, Geeks of Color

In the hands of lesser actors, The Lovebirds would quickly fall apart and feel like a lesser version of a movie like Date Night.
– Matt Goldberg, Collider

As long as you don’t go in expecting some kind of reinvention of the genre, you’ll get something enjoyable and easy to watch.
– Joey Magidson, Hollywood News

There isn’t a lot that sets The Lovebirds apart… it’s a fun movie, but just ok.
– Deirdre Molumby, entertainment.ie

I knew that The Lovebirds would be a funny movie, but I wasn’t expecting to laugh until my cheeks hurt.
– Tessa Smith, Mama’s Geeky

The Lovebirds is a pleasing comedy, funny from beginning to end.
– Mick LaSalle, San Francisco Chronicle

Nothing is treated as low-hanging fruit when it comes to humor and the cast more than delivers the goods.
– Douglas Davidson, Elements of Madness 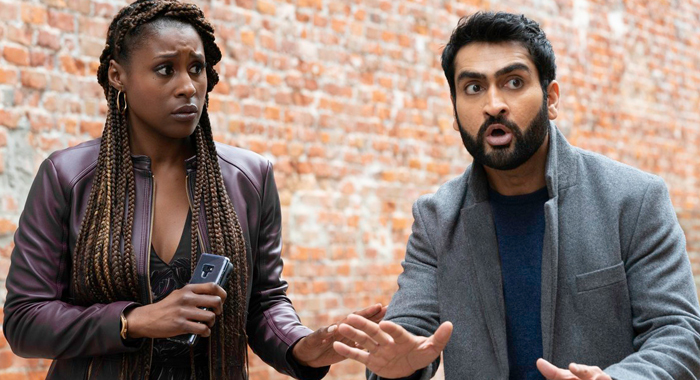 Do the leads have good comedic chemistry?

Issa Rae and Kumail Nanjiani have original comedic styles that mesh well… [They] work cooperatively, setting one another up for jokes and generating a rapport that’s authentic.
– Mike McGranaghan, The Aisle Seat

Even if you don’t always buy these people as a couple, their slapstick comedy hits its marks; it’s hard not to root for this pair of adorable screwballs.
– Beandrea July, Hollywood Reporter

Kumail Nanjiani and Issa Rae are fantastic together… They’re one of the best comedy duos of the year so far.
– Joey Magidson, Hollywood News

Likable though they are, their distinct comedic personalities don’t gel at all.
– Johnny Oleksinski, New York Post

And how about the romantic chemistry?

They click as romantic leads… A lot of rom-coms can make you root for their characters because they are funny together. Far fewer pull off the heat that The Lovebirds offers.
– Kristy Puchko, IGN

Nanjiani and Rae are irresistible together… The chemistry never feels manufactured, it feels earned.
– Michael Roffman, Consequence of Sound

There is always something undeniably likable and charming about the two of them as a couple… Rae and Nanjiani are kind of perfect together.
– Perri Nemiroff, Perri Nemiroff

You wouldn’t say their chemistry here is anything to write home about. But then they are meant to be playing a couple struggling to find a spark.
– Deirdre Molumby, entertainment.ie

Nanijani and Rae work well together, although “chemistry” is perhaps a stretch.
– Peter Bradshaw, Guardian 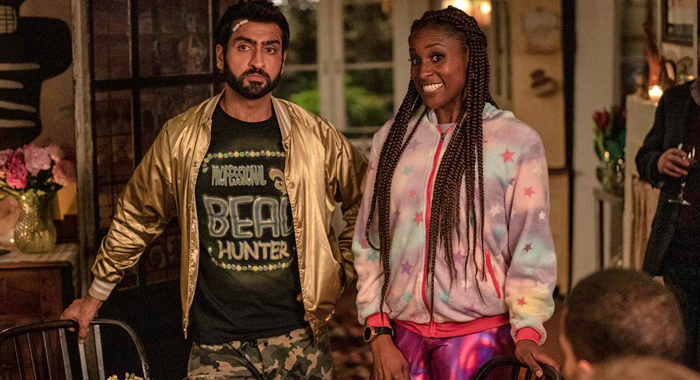 Should they do more movies together?

I would definitely love to see the pair reunite for another film, for sure.
– Britany Murphy, Geeks of Color

By the end of the movie, it’s hard to make the case that Jibran and Leilani should be together, but we definitely want another movie starring Nanjiani and Rae.
– Matt Goldberg, Collider

My only real complaint about The Lovebirds is I want more.
– Kristy Puchko, IGN

Is The Lovebirds a good example of inclusion?

One of the pleasant surprises of The Lovebirds is that it neither makes a big deal of nor blindly ignores the fact that its Average Joe protagonists are Asian and black. This is not a case of inclusive casting to score shallow “diversity” points.
– Beandrea July, Hollywood Reporter

To have a mixed-race couple (without a white half) as our romantic leads is a fresh and welcome sign of the changing Hollywood landscape.
– Ian Sandwell, Digital Spy

Could the movie help me with my own relationship?

Some of the best commentary on relationships (and what plagues them) from any movie I’ve seen in a long time.
– Britany Murphy, Geeks of Color

A farcical murder mystery, it turns out, provides just the right backdrop for an exploration of why long-term relationships can fizzle out — and why doing the work necessary to maintain them can be worth it.
– Beandrea July, Hollywood Reporter 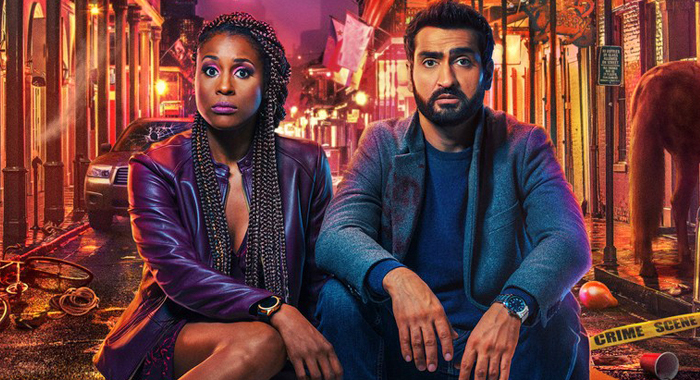 Does it do justice to the New Orleans setting?

I loved the New Orleans setting… Showalter did a really solid job of capturing exactly what makes the location stand out.
– Perri Nemiroff, Perri Nemiroff

New Orleans [is] treated as a slapdash backdrop more than a spectacular setting to explore through hijinks.
– Kristy Puchko, IGN

How about the action?

The Lovebirds is not only hilarious, there is some pretty great action in there too.
– Tessa Smith, Mama’s Geeky

The “action” of this action-comedy is pretty low-key… Still, these scenes pack a punch because of the superb comic timing of its stars.
– Kristy Puchko, IGN

While The Lovebirds are sparkling conversationalists, as the plot gets more convoluted, the champagne starts to go flat…that leads to a sluggish last half hour.
– Katie Rife, AV Club

What lets The Lovebirds down is that its main plot isn’t all that original… The murder-mystery/conspiracy side of The Lovebirds isn’t that interesting.
– Ian Sandwell, Digital Spy

The Lovebirds slows to a crawl during the second act. The murder mystery isn’t clever, instead strung together through sparse clues with none posing any inherent importance.
– Robert Daniels, The Playlist

Rae and Nanjiani are two of the most exciting voices working in film and television today, as actors, writers and creators…. [but this] was not created or written by either. And at times, you kind of wish it had been.
– Lindsey Bahr, Associated Press

As predictable as most of The Lovebirds is, there are enough original turns to incite surprise in an audience.
– Douglas Davidson, Elements of Madness

There were some plot twists I didn’t see coming. That is what made this movie not only funny, but actually really worth a watch — because of a good plot.
– Tessa Smith, Mama’s Geeky 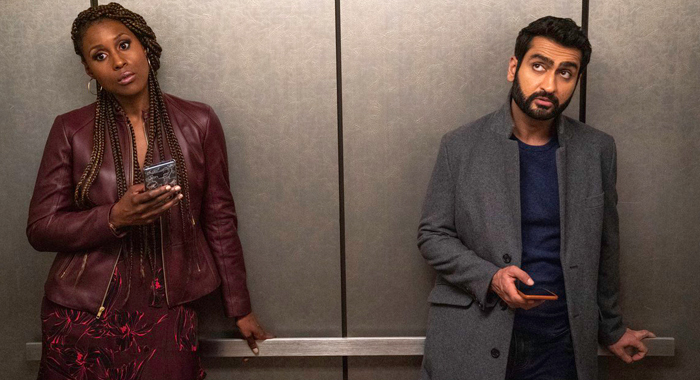 Is the movie better off on Netflix?

A perfect fit for the streaming service – and that’s not a back-handed compliment.
– Ian Sandwell, Digital Spy

Exactly what you want right now in quarantine… The perfect date movie, and it’ll do gangbusters for Netflix, who has yet to issue an original rom-com of this quality.
– Michael Roffman, Consequence of Sound

It’s something you might watch on a plane. Right now, that’s no putdown: an unappreciated comfort from happier times.
– Peter Bradshaw, Guardian

It’s a fine movie to spend 86 minutes watching from the comfort of your own home.
– Lindsey Bahr, Associated Press

As a night out movie, it’s a stretch to say that The Lovebirds would be worth the effort of going to the theater, but on Netflix, it’s an easy recommendation for a Friday night date movie.
– Matt Goldberg, Collider

Much of The Lovebirds doesn’t work without an audience… [It] really needs the energy of a crowd to really generate mojo.
– Douglas Davidson, Elements of Madness

Yes, it might have been even funnier with an audience, but it’s funny enough as it is.
– Mick LaSalle, San Francisco Chronicle

The Lovebirds is all too happy to embrace its destiny as a disposable movie in a throwaway year.
– David Ehrlich, IndieWire

For a Netflix night in, you could do worse.
– Deirdre Molumby, entertainment.ie

The Lovebirds premieres on Netflix on Friday, May 22. 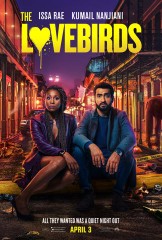 #1
Adjusted Score: 77358%
Critics Consensus: If the breezily enjoyable The Lovebirds feels like a little less than the sum of its parts, it's still an enjoyable showcase for the talents of its well-matched stars.
Synopsis: Accused of murder, a desperate couple embark on a dangerous quest to solve the mystery and clear their names.... [More]
Starring: Kumail Nanjiani, Issa Rae, Paul Sparks, Anna Camp
Directed By: Michael Showalter