The King of Staten Island First Reviews: A Little Long, but Judd Apatow's Best Film in a Decade

Critics say the comedy starring and co-written by SNL's Pete Davidson is a natural fit for its star and sparks great work from its cast, even if it's a tad long.

The King of Staten Island, the latest directorial effort from Judd Apatow (The 40-Year-Old Virgin, Knocked Up) arrives exclusively on VOD on June 12th. The movie was co-written by and stars Saturday Night Live cast member Pete Davidson, whose life story serves loosely as the basis for the film. Initial reviews are calling it one of the filmmaker’s best in years for its dramatic maturity — apparently this isn’t exactly another laugh-out-loud comedy — and for the winning supporting cast more than for its central star. Of course, this is an Apatow movie, so criticisms about its length are to be expected.

Here’s what critics are saying about The King of State Island:

How does it compare to Judd Apatow’s other films?

It’s surely the best Apatow movie since Funny People, and maybe even since Knocked Up.
– Kyle Pinion, The Beat

Never has Apatow been so on point collaborating with another creative to make a fully-formed vision that isn’t just a hilarious experience. The King of Staten Island is the most technically proficient work of his entire career.
– James Clay, Fresh Fiction

The movie deserves credit for skewing a little darker than the usual Apatow conclusion.
– Brett Arnold, Consequence of Sound

It’s an arrested development story, but it also shows that Apatow is growing up.
– Matt Goldberg, Collider 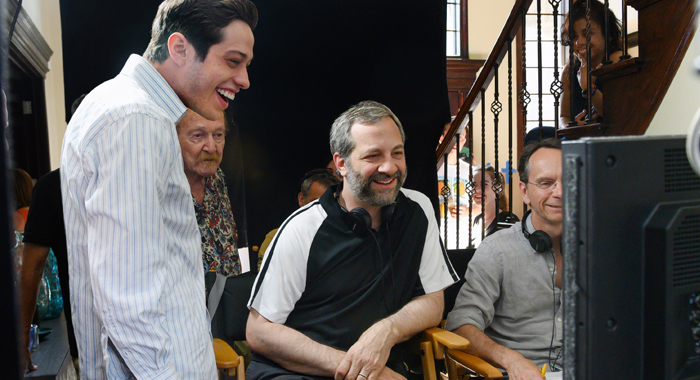 How is Pete Davidson’s Performance?

Davidson is a triumph in The King of Staten Island.
– Molly Freeman, ScreenRant

On the basis of The King of Staten Island, I couldn’t tell you if he could carry a whole movie that wasn’t about his own life – but he definitely carries this one.
– Matt Singer, ScreenCrush

He certainly has comic timing and screen presence, and yet I don’t know if he has the range to play characters that don’t mirror his own life and experiences.
– Matt Goldberg, Collider

His range as an actor may not turn out to be as wide as his wingspan, but the numb vulnerability he shares here makes for a performance that might as well be seeping out of his skin.
– David Ehrlich, IndieWire

While no one will confuse him for Laurence Olivier anytime soon, Davidson does have a breezy charm that affixes his personal connection to the material and engages throughout.
– Kyle Pinion, The Beat

Davidson, it turns out, is a fine leading man. Loose and expressive, he strikes a balance of droll loutishness and sensitivity that never tips over into Sandler-esque clowning or cloying.
– Jon Frosch, Hollywood Reporter

The ensemble allows Davidson to play off of other actors in different ways to ideally give the young comic a chance to shine.
– Aaron Neuwirth, We Live Entertainment

While he sparks with an irreverent punch line here or there, there’s not enough liveliness in this maudlin role for Davidson to dazzle in.
– Kristy Puchko, IGN 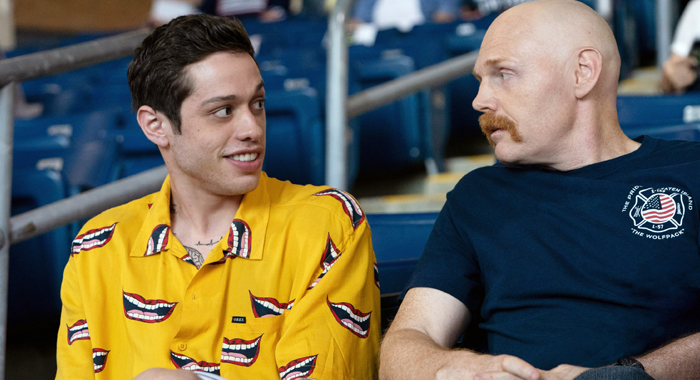 And the rest of the cast?

Even though this is supposed to be Davidson’s big coming-out party, it’s the cast around him who gets to truly shine. [Marisa] Tomei, an always-welcomed presence, is phenomenal.
– Chris Evangelista, Slashfilm

One of the best things about The King of Staten Island is the supporting cast and their performances apart from Davidson, especially Bill Burr.
– Rendy Jones, Rendy Reviews

A better [movie] whenever Burr is on screen, especially when he’s with Tomei.
– Justin Chang, Los Angeles Times

While it’s too early to imagine what this year’s awards season is going to be like, [Burr] deserves some serious recognition for his performance.
– Chris Bumbray, JoBlo

It goes without saying that the movie is pretty funny.
– Rendy Jones, Rendy Reviews

There are a handful of laugh-out-loud moments throughout Staten Island and one screamingly-funny extended sequence that winds up influencing a great deal of the plot.
– Brett Arnold, Consequence of Sound

There are few out-and-out comedic set pieces; the humor appears out of honest and sometimes intense conversations.
– Matt Singer, ScreenCrush

The King of Staten Island is more of an indie drama that happens to have some really sharp jokes.
– Matt Goldberg, Collider

There’s nothing here that’s going to stick with you – the next great quotable comedy this is not.
– Chris Evangelista, Slashfilm

If you go in expecting Apatow’s usual comedic flair you may be disappointed as the laughs aren’t as numerous as his previous films. However…it is nonetheless entertaining.
– Allison Rose, FlickDirect 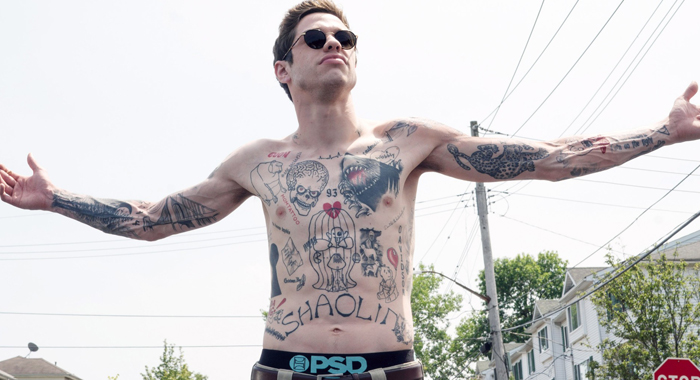 Is the running time a problem?

The King of Staten Island is inexcusably overlong.
– Brett Arnold, Consequence of Sound

There is no reason for this movie to be this long, especially when it’s telling a story that has been told ample times before.
– Rendy Jones, Rendy Reviews

The movie, juggling too many narrative priorities over an overlong 137 minutes, seems to succumb to Scott’s own sense of aimlessness as much as it depicts it.
– Justin Chang, Los Angeles Times

The real issue is not the running time, but that you feel it.
– Kristy Puchko, IGN

I never got bored or wanted Apatow to wrap things up. If anything I wanted to spend more time with some of the supporting characters.
– Matt Singer, ScreenCrush

The editing by Jay Cassidy keeps the plotting from going off the skids while staying true to Apatow’s signature improvisational style.
– James Clay, Fresh Fiction

Does it get better as it goes?

The movie’s second half is more compelling than it’s first.
– Chris Bumbray, JoBlo

While certainly Apatow hoped the overlong first half would match the fecklessness of Scott’s life, it’s a hard slog… Without a sense of direction in the dark comedy’s first half, the heartfelt second half nearly arrives unnoticed.
– Robert Daniels, 812 Film Reviews 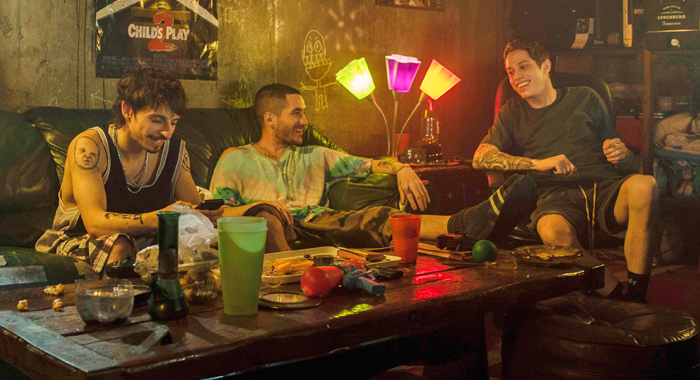 Will it make for a good rental at home?

It’s the kind of soul-bearing filmmaking that’s at least worthy of a weekend view in your own home.
– Kyle Pinion, The Beat

Having this story exist on streaming exclusively seems oddly appropriate. Davidson is the comedian for this generation, and most of his die-hard fans would rather catch up with him at home anyways.
– James Clay, Fresh Fiction

A pretty apt film for home viewing; something to dip in and out of, perhaps, while you’re gaming, ordering pizza to your mother’s basement, or having a lazy lockdown.
– Fionnuala Halligan, Screen International

Viewers stuck at home won’t go wrong with The King of Staten Island – a dramedy that delivers both laugh-out-loud comedy and entertaining drama.
– Molly Freeman, ScreenRant

The King of Staten Island premieres on VOD on Friday, June 12. 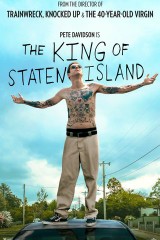 #1
Adjusted Score: 96010%
Critics Consensus: The King of Staten Island's uncertain tone and indulgent length blunt this coming-of-age dramedy's ability to find itself, but Pete Davidson's soulful performance holds it together.
Synopsis: An aimless slacker dreams of becoming a tattoo artist while living with his mother and hanging out with his friends... [More]
Starring: Pete Davidson, Marisa Tomei, Bill Burr, Bel Powley
Directed By: Judd Apatow